October 30-31.
Thursday was a really busy day. Our plan was to visit some of the ancient Roman spots. We saw Palatine Hill, the Forum, and the Coliseum. At the Forum and Coliseum we all listened to the Rick Steves audio tours. We really only went to Palatine Hill because we’d heard it was the best place to queue to buy the multiple entry ticket for all these sites, but I think we probably could have skipped it, because in the end we were pretty worn out and it may have saved us a bit of energy since we did walk around there a bit. It was quite pretty. 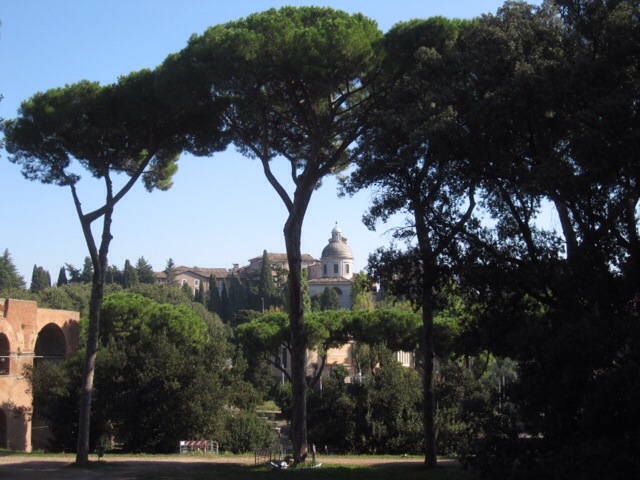 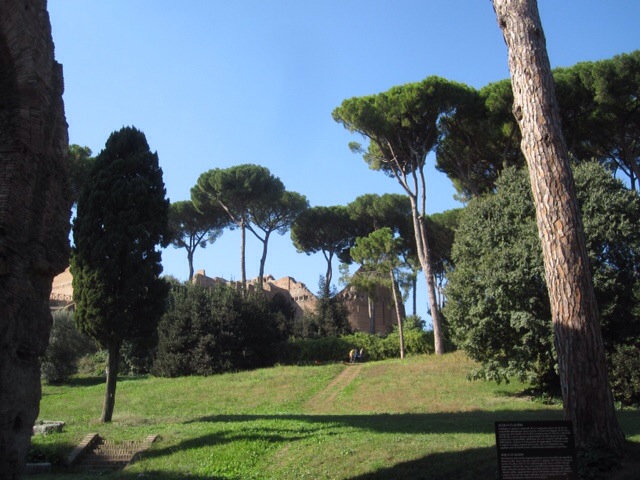 I think most of us enjoyed the Forum area the most out of all the places we saw on Thursday, though I was a bit discomfited by the Titus Arch, which commemorates the Roman victories over Judea and the destruction of the Temple. It was interesting seeing where Caesar had ruled and died (first picture), among other places, and some of the ancient pieces that were still standing, including the senate and a brass doorway. Interestingly, some of the damage/ruins at this site are because later Romans took marble and other materials from the Forum area to build other grand buildings. 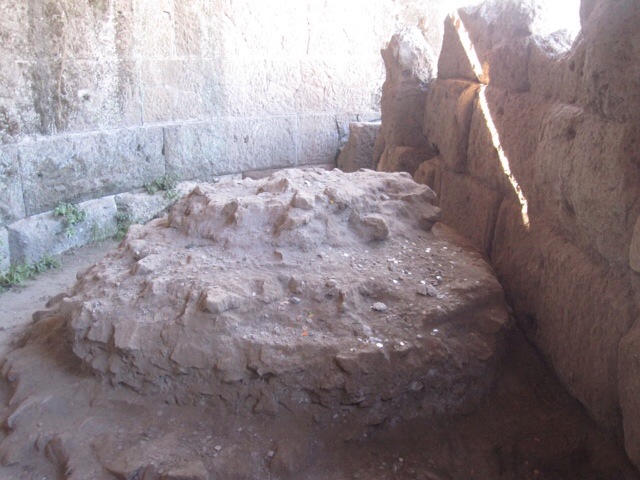 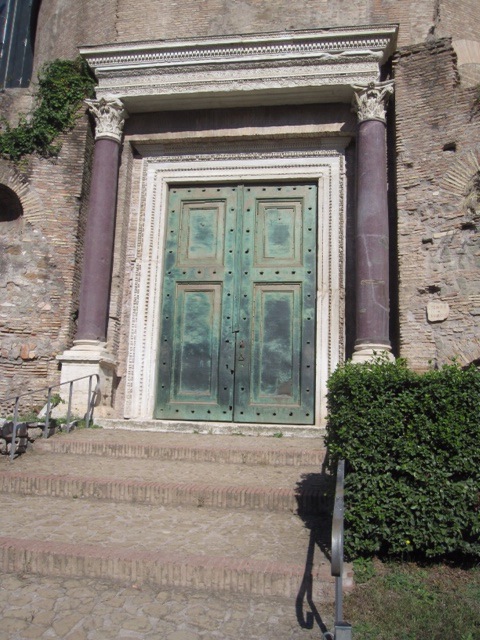 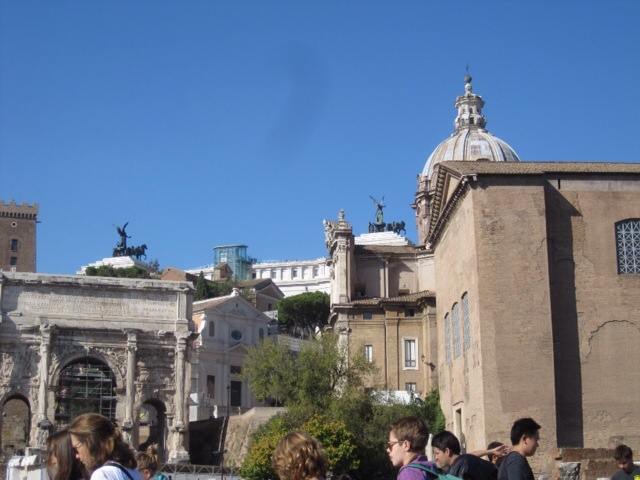 We were very disappointed that the Senate building was closed, as apparently it had been when Angie visited in 2011. One wonders if it will ever be open.
We took a break for lunch between the Forum and the Coloseum at a place that Angie had been to on her last trip to Rome. It was pretty decent and also in a relatively peaceful spot, so it gave us a bit of a respite during a busy day, especially since there were decent-sized crowds at some of these attractions. 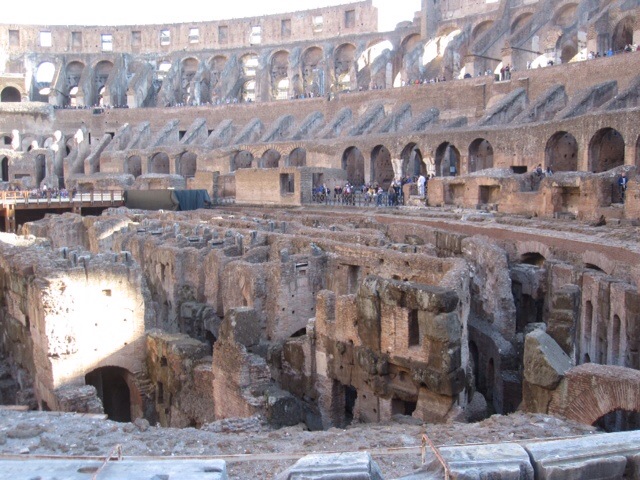 We did part of the tour of the Coliseum, but I think we were all flagging after a while, plus not as interested in a place where so much violence occurred.
After we were done with the ancient sites, we decided to visit one more church, St. Peter in Chains, which has the alleged chains with which St. Peter was bound. It’s also notable for Michelangelo’s Moses, which was quite cool. 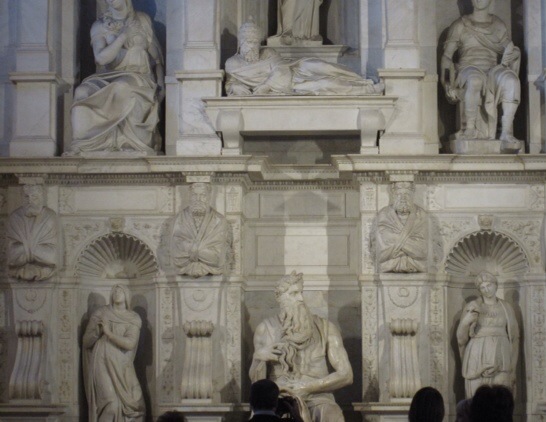 I thought it was ironic that there were signs at this church about everything being free, but you have to put a Euro coin in a slot in order to illuminate the sculpture. Fortunately, many people seemed willing to do this, so I got a good look at it.
We probably should have called it a day after the Coliseum, but this was a church Angie had wanted to see. By now, Pat and Janet were pretty well cooked, especially since it had been a climb to the church, so we put them in a cab back to the flat. Angie and I had an errand to run regarding our ongoing quest to vote (I’m going to write a post about this, I promise), plus we needed to shop for dinner. We ended up walking probably another four miles, so were beyond exhausted when we got back. I had fully intended to cook dinner but I was so worn out, I just prepared and cooked the fish and everyone else contributed on the rest of the meal. Angie and I had bought what in Italian is called Orate. We had actually been helped out at the supermarket by an Englishman who overheard us at the fish counter trying to figure out what to get, and told us that this and one other fish on display were the most commonly eaten by Italians. It turns out that Orate is Gilt Headed Bream, which is what Pam had made for us last week. I actually used a similar preparation method: butter, lemon, and wine, plus a little garlic because why not? It came out pretty well, and along with the other components of the meal that the others had prepared (potatoes and green beans) it was very satisfying. We also drank a nice Pinot Grigio with it. After dinner, we had just enough energy to go across the street to Pizzeria Amalfi to have some tiramisu and use the internet. Janet and Pat had eaten dinner there the night before while Angie and I were out with Marina and Agnieszka, and felt that the tiramisu was better than we’d had the night before. It was pretty good. I liked it better.
Friday, October 31
On Friday morning we got up early and finally made it into St. Peter’s Cathedral. The key here, as Rick had told us, was to go early. The basilica opens at 7:00 AM and we were there, through security, and in the door by 7:45, which got us ahead of a lot of the crowds. We pretty much just strolled through security, and apparently that gets more stringent later in the morning. This was another site where we used the Rick Steves audio tour. There is so much to see at St. Peter’s but we focused mainly on the spots mentioned on the tour. I kind of liked the altar and some other spots. I didn’t care for the Pope crypts where they have the bodies displayed (oh, he’s not decomposing very fast, let’s put him on display!). Again, some of the social history aspects were very interesting, like the fact that the main altar (second picture below) is made of brass scavenged from the Forum. 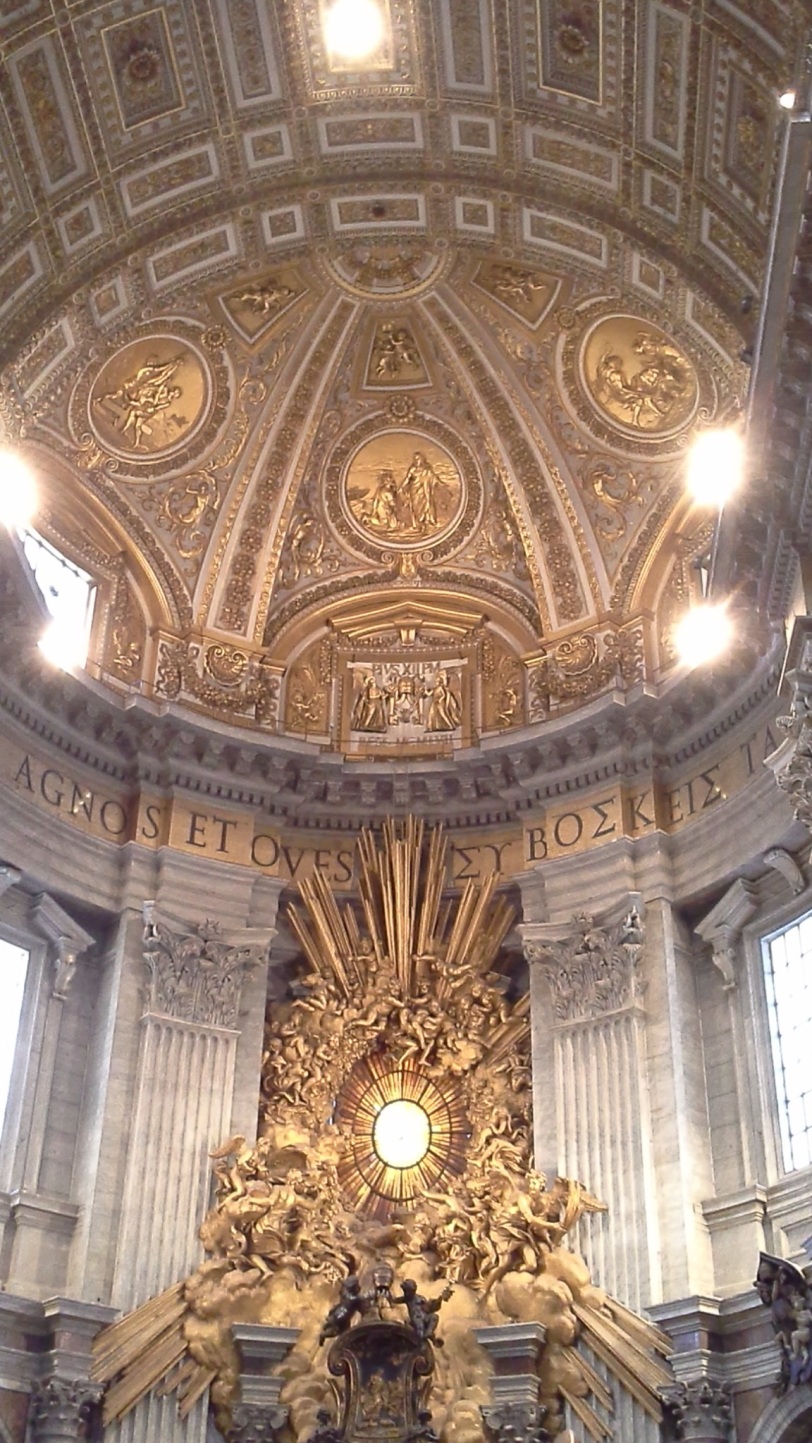 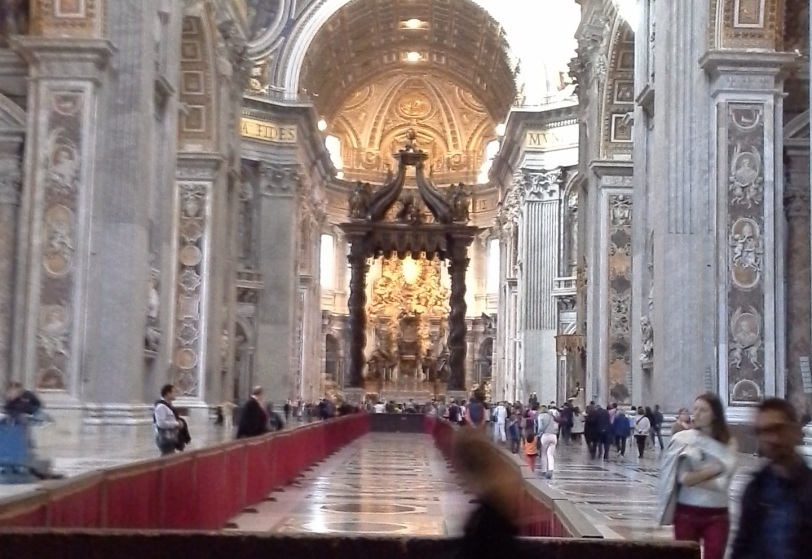 When we were first doing our visit, the Michelangelo Pieta was barricaded off even further than the bulletproof glass so it was hard to see. The bulletproof barrier was put in after this incident.
Fortunately later on the barriers were removed so we could get a closer look. I managed to get a good look before a large crowd converged. The place was getting busier and it was a good time to be done with our tour. I think we all enjoyed it, listening to the tour and then each moving off to focus on the areas of most interest to each of us.
Most of the rest of the day, we took it fairly easy. Angie and I ran out to the US Embassy to drop off our ballots, and then walked to the Termini rail station to reconnoiter and possibly get our tickets for the trip to Orvieto coming up on Sunday. The station has a terrible reputation as a hotbed of thieves and scammers so we wanted to get a sense of the place. We were approached several times by very unofficial people wanting to “help” us but we managed to buy our tickets at a machine with no outside assistance. We then scoped out the platforms and the route to the metro, leading us to conclude that we should maybe cab it to the station on Sunday morning, even if it meant taking two cabs. We then returned to the flat to rest up for the evening. Pat had started a chicken soup so we could have a satisfying and easy dinner before we left for the Vatican Museum Tour.
Angie had arranged for us to go on a tour with a small group. Given how chaotic it was at the museum, I think we were all grateful for this. We had hoped that being an evening tour it wouldn’t be as crazy, but it was crazy enough. It was also the last evening tour of the season, which probably drew bigger crowds too. I found the tour interesting but not earth shattering, and was less impressed than I expected to be with the Sistine Chapel. It is cool to be in another place where key events happen, and where Michelangelo did one of his masterworks, but other things have moved me more, even on this part of the trip. The lighting was cool though and apparently the new lighting system was “opened” by the Pope the day before so we were the first to see it.
Here are a few choice pictures from the museum tour. 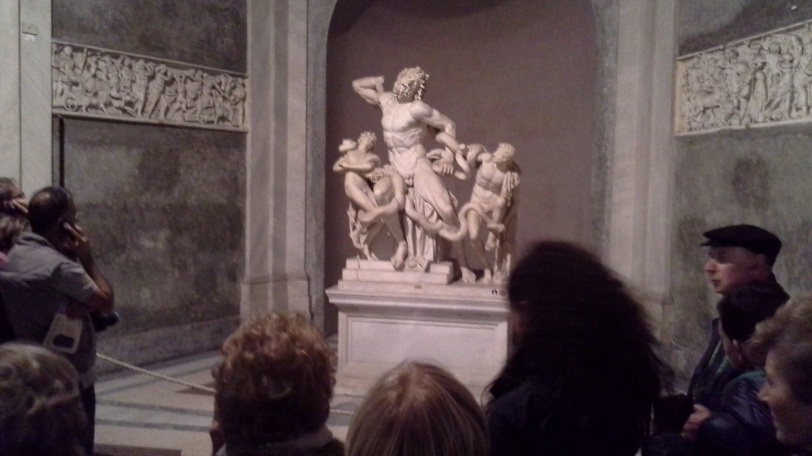 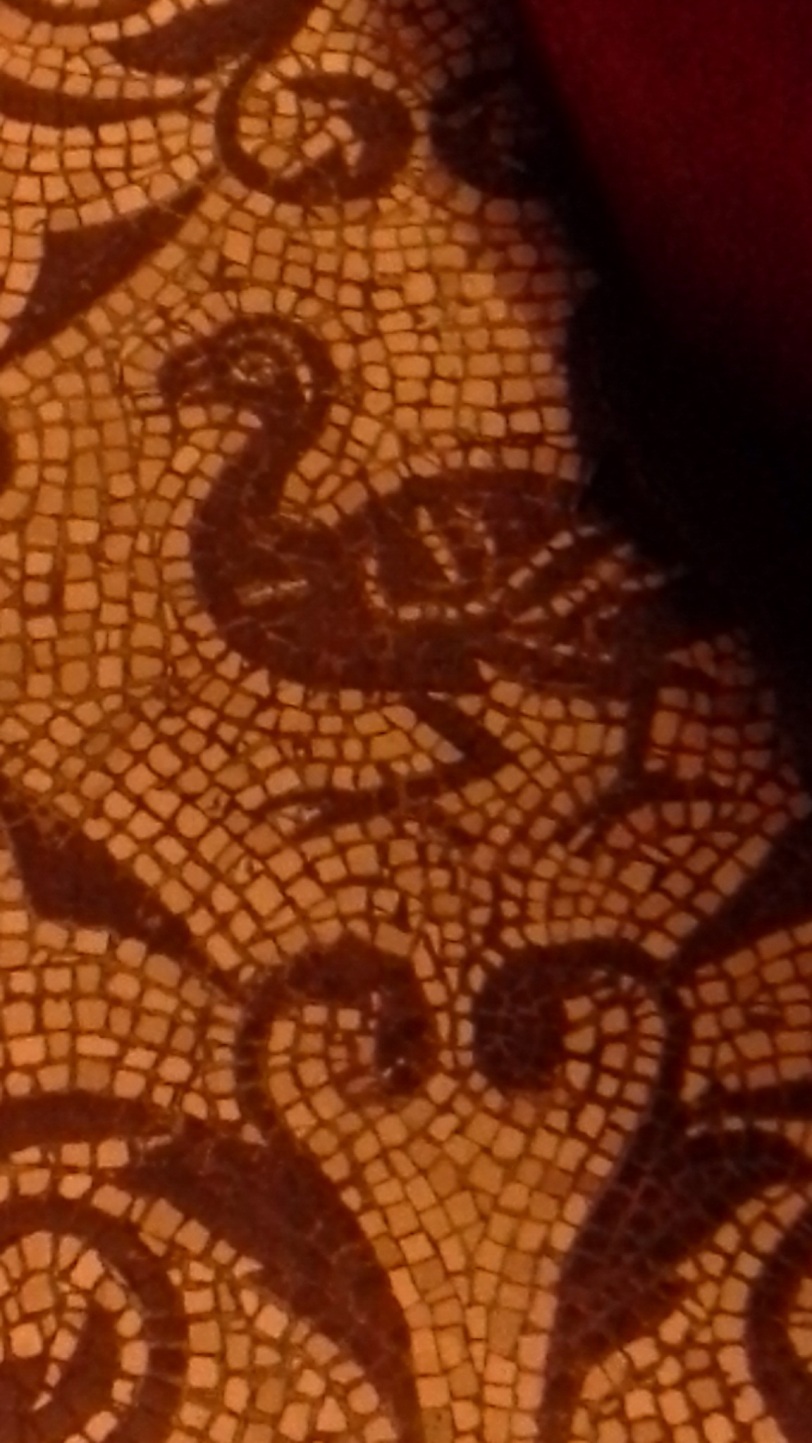 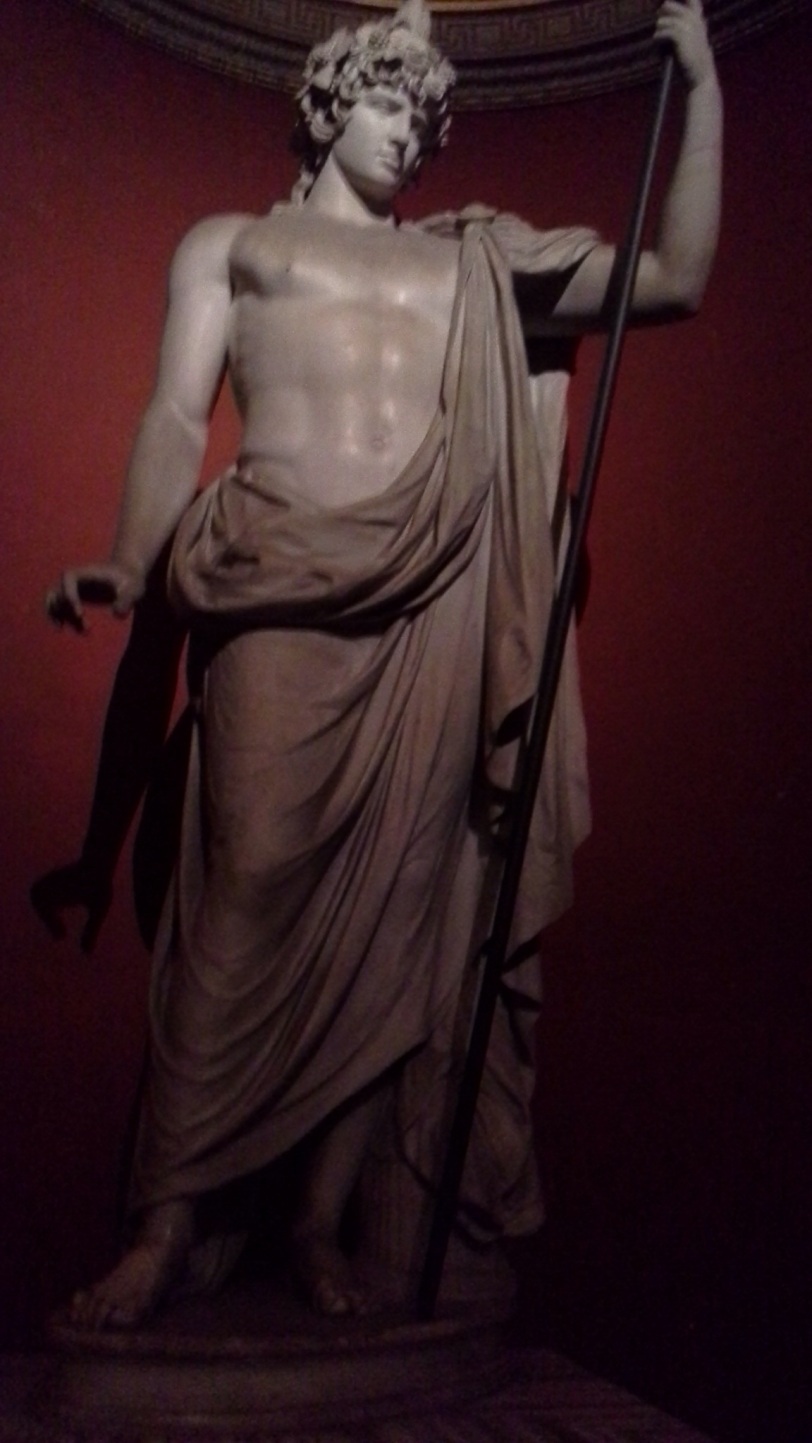 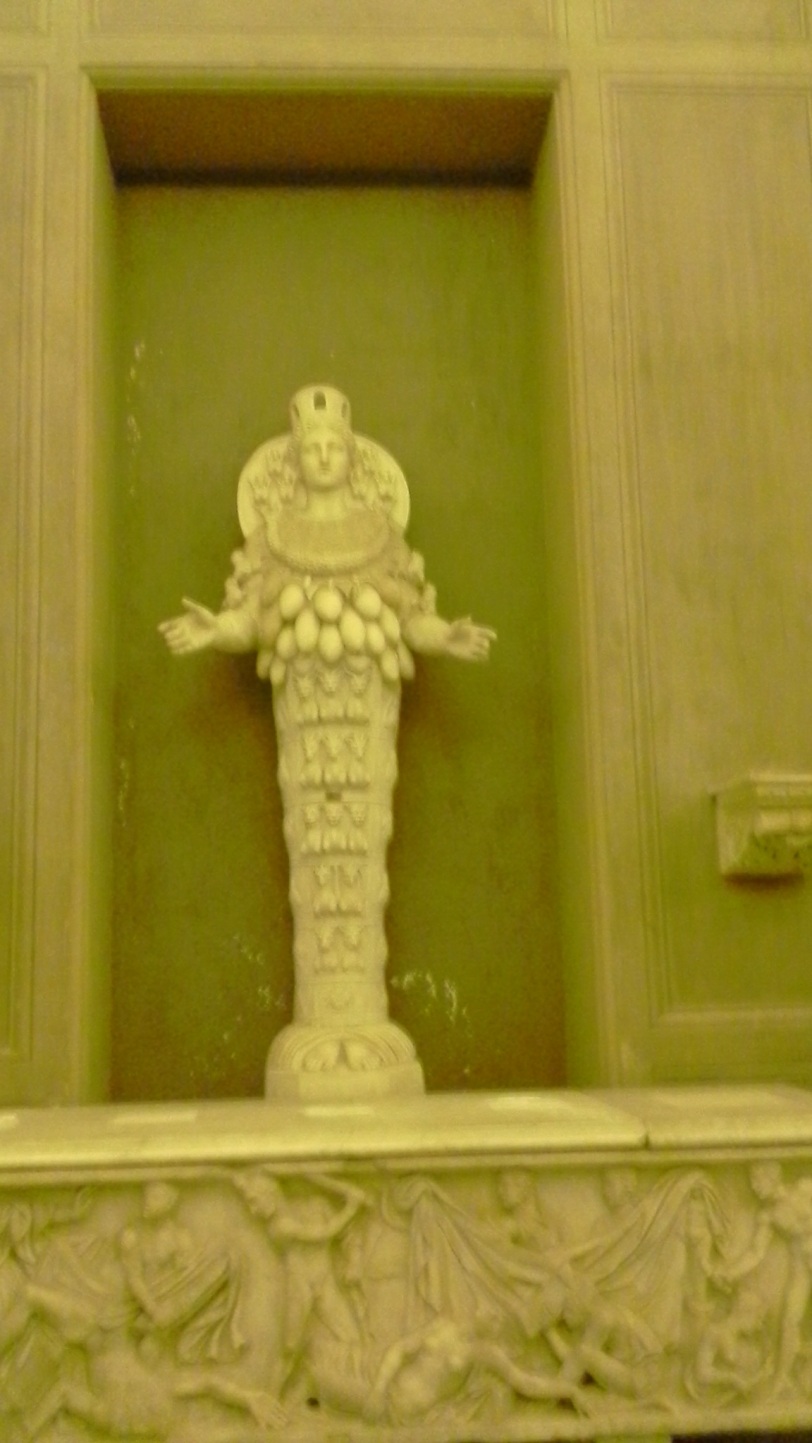 We ended the evening with gelato, of course.

3 thoughts on “Rome wasn’t seen in a day, Part II”