The News and Nothing But, and Some Other Stuff

Updated with the missing pictures.

I decided that on Tuesday I should go to the museum I most wanted to see, to make sure I got there. I’m glad I did, because it actually took the best part of two days to see the bulk of the place I picked, which is called Newseum. As its name implies, this is a museum dedicated to the history of the media as well as key moments in U.S history as told by the various types of media prevalent at the time. There is so much to see there, I really can’t remember everything, but here are the highlights I remember. I took some photos to help me remember some exhibits also. The museum recommends that you start on the 6th floor on the Greenspun Terrace, so I did that. Although the day was not super clear, the views of key buildings along and near Pennsylvania Avenue were pretty cool.

The first major exhibit I looked at covered the fall of the Berlin Wall and the reunification of Germany. I was covering the region for a current affairs publication at ABC-CLIO when this was happening, so I remember it well, and it was cool to re-live the events leading up to this as well as some of the older history of the Berlin blockade.

I also visited an exhibit looking at the role of the media in the presentation of the Vietnam War to the American people. Interestingly, one of the conclusions was that the anti-war movement actually played a greater role in turning the tide of opinion in the country against the war than many who were active in the movement thought.

I paused on Tuesday to walk down to the sister restaurant of the place where we’d had the fantastic lunch on Sunday. Daikaya is a ramen bar. I was a bit concerned because the only non-pork dish they offered was vegetarian, but in the end I was not disappointed one bit. There were a ton of vegetables in my broth, including Brussels sprouts and wood ear mushrooms, and it was tasty and filling. 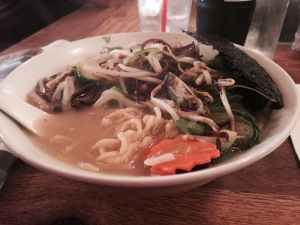 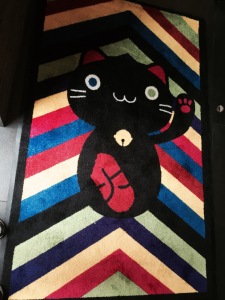 Rug. in the doorway at Daikaya

Lincoln’s assassination was one of the other exhibits I looked at back at the Newseum. It had some interesting details. There was a map on the floor showing some of the key locations in the tragedy. It turns out that Newseum, which is on Pennsylvania Avenue, is on the site of the hotel at which John Wilkes Booth had stayed before he shot Lincoln.

One other exhibit that was particularly interesting to me was called Civil Rights at 50, where you could see the actual lunch counter at which young black activists sat in for equal rights in Greensboro, North Carolina in 1960. 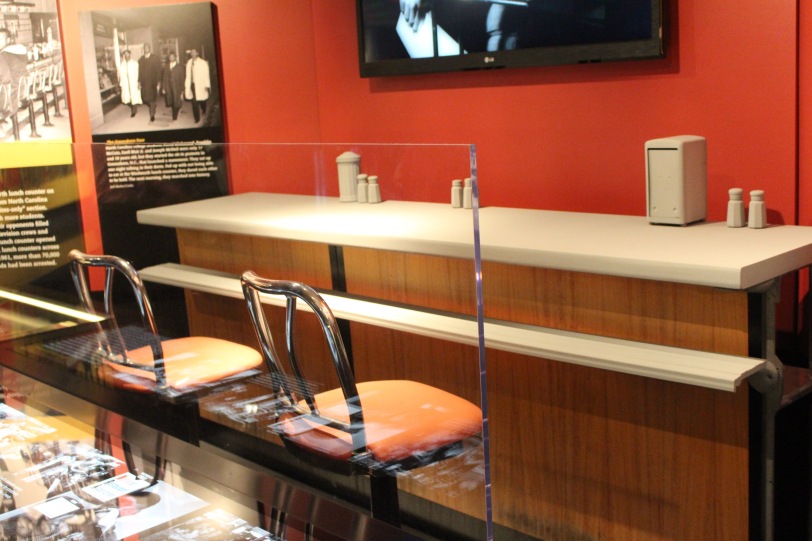 I hit a wall at the museum both days but I saw a lot. I wanted to get back to the hotel on Tuesday and sit for at least a little bit because Angie and I were going to dinner with a very good friend who was also attending the work meetings. Angie had found a place that was on a top restaurants list for the city from Eater 38, and had made a reservation. The menu at Bar Pilar looked very interesting. We walked all the way there and were seated, only to find that they were not offering their regular menu that night because they were celebrating Hemingway’s birthday. The first we heard of this was when the host handed us menus that didn’t look anything like what we’d looked at online. I’d already been a bit miffed that the host had been on the phone when we walked in and hadn’t even acknowledged us. We weren’t even sure he was the host at first (maitre d’ would give too much dignity to the role this guy played), given his posture and the fact that it wasn’t a conventional host station. The special menu for the evening was very pig and seafood heavy, which wasn’t going to work for us.

Fortunately, Angie had noticed that we’d passed another place that was on the same restaurant list while we were on our way to the first place, named Estadio, so we decided to walk back that way and see if we could get a table. Amazingly, we were seated right away and given a window seat, which was great, as this was a very bustling neighborhood with a ton of foot traffic. Great start. Next bonus, the drink offerings, which included alcoholic slushies! Angie had something made with strawberries and Cece had one flavored with raspberries. I had the red sangria, but I think Cece’s drink was the most interesting. I can’t remember everything we ate, but I did try the Boquerón, with Artichoke, Olive, and Bread, and we shared Roasted Beets with Endive, Orange & Idiazábal; Crispy Duck Breast, with Beluga Lentils and Catalan Greens; Sherry Glazed Halibut, with Cherry, Garbanzo and Smoky Romesco; and a couple more dishes. Everything was fantastic, including the service. We felt very welcomed and decided to stay for dessert! Again, Cece made the top choice, Manchego Cheesecake, with Quince Jam, and Pistachio Granola, but I enjoyed my Warm Chocolate Hazelnut Cake, with Dark Chocolate Ice Cream. Angie thought her Caramel Ice Cream Profiterole, with Chocolate Glaseado was good, but agreed that the cheesecake was the clear winner. We returned to our hotel very satisfied and excited to recommend Estadio to future visitors to the city.

As I wrote, I spent a chunk of Wednesday back at Newseum, even having lunch in the cafeteria so I didn’t have to leave. They did salad by the pound which was satisfying but spendy. In the evening, we had an early dinner, and then Angie, Cece and I set off to walk too some of the monuments. There was no logical way to take the Metro to get there, so we had to walk both ways, which was pretty exhausting. We started out with the intention of seeing just the Martin Luther King and FDR memorials but also ended up checking out the World War II and Korean War memorials too, as well as passing close to the Jefferson and Lincoln. It was a lot of walking on a hot evening. The MLK memorial was really impressive, as was the FDR, which I quickly realized I’d seen before. It was really crowded, so we didn’t stay long. Actually the entire mall area was pretty busy, probably because it was a nice night. 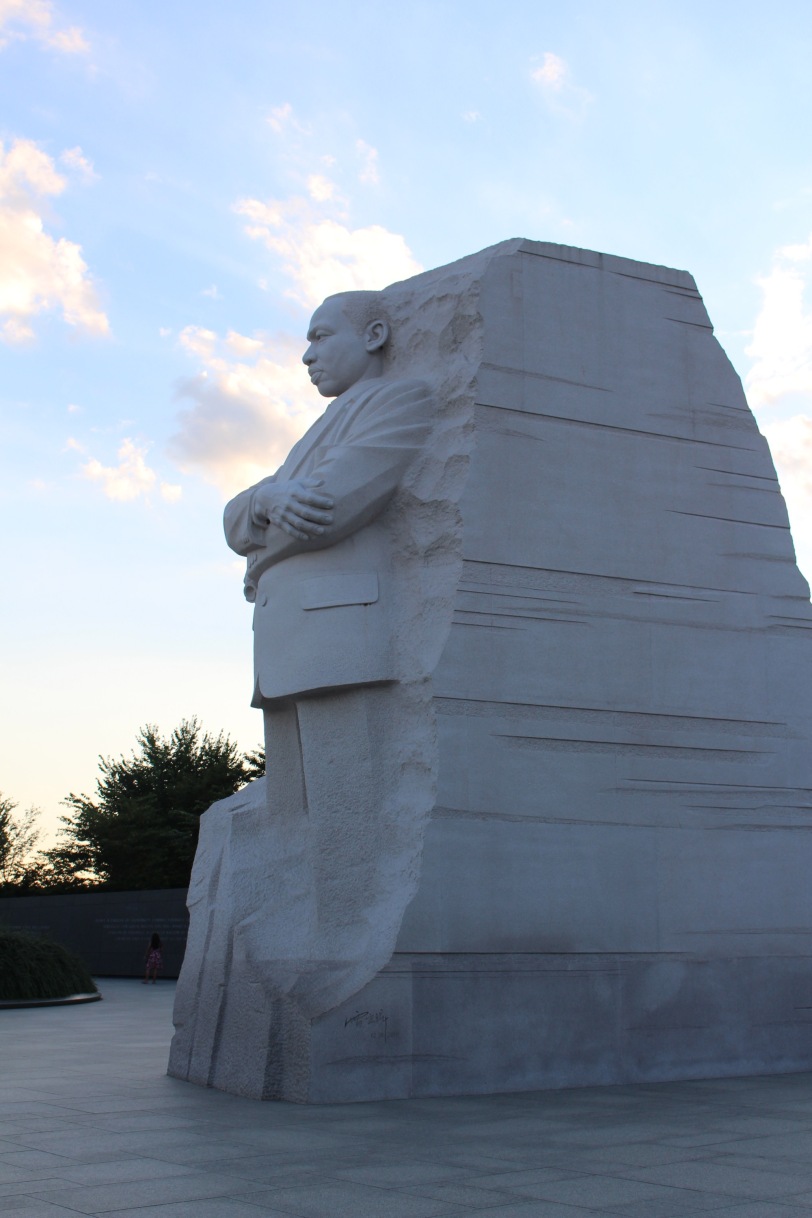 It felt like a really long walk back to our hotel, and we were disappointed that there weren’t any ice cream or gelato spots on our route to help boost us on our way.