After being in England for almost a week, we are on the road on our bikes!

I had a feeling the day’s plan might be a little ambitious and it was. We rode to the station in Pinner and took a train to the end of the Underground line (not really underground in that section) at Amersham in order to shave 10-15 miles off the biking portion of the journey. Our first challenge was at the Amersham station, where we were dropped on a platform on the far side of the tracks. The bridge across had no lifts (that be “elevators” in American). Based upon my experiences in the last week, I don’t think there is an English equivalent of “ADA-compliant.” So we took off the rear panniers and shuttled bikes and bags up, across, and down–first workout of the day. Amersham itself was fairly straightforward, though it has terrible road conditions. We started seeing signs for Chiltern Cycleway (more on this later) right away. The signs seemed to match our maps, so we followed them out of town. We managed to make one wrong turn in the early part of the day, which led us to an “A” road (the not quite as big and fast as an “M” (limited access) roads). The return trip of course required a slog up a big hill. Yay us 😦
After getting back on course, we came to a place where it seemed that there would be an underpass to avoid crossing both an “A” and an “M” road. However, the stairs down to it were quite overgrown, not to mention challenging with a fully-loaded bicycle. I stopped Maureen from coming down, then found the route that people actually use. Even then, the path was steep and a bit wet, so we chose to walk down: 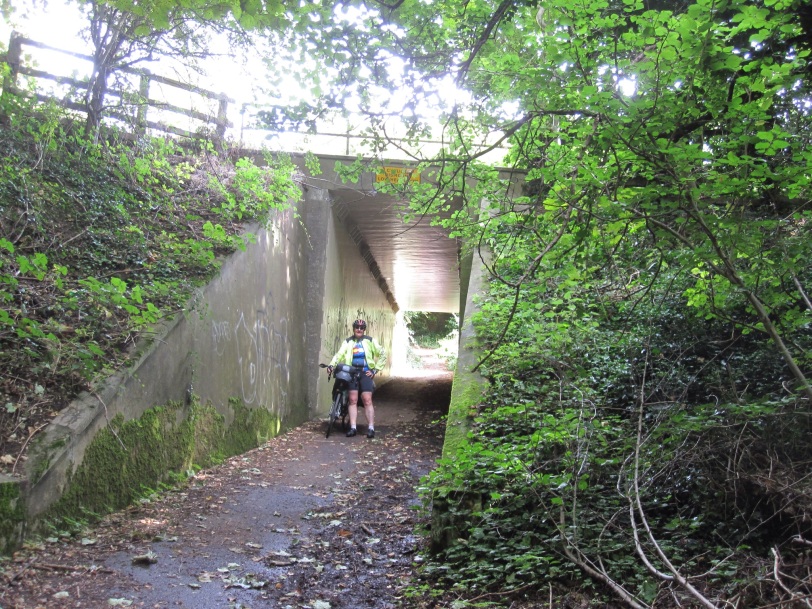 Not much later, we were on a cycle path, which became a bridle path (the GPS assured me that cycling was OK) that was a bit reminiscent of the Great Divide Mountain Bike Route: 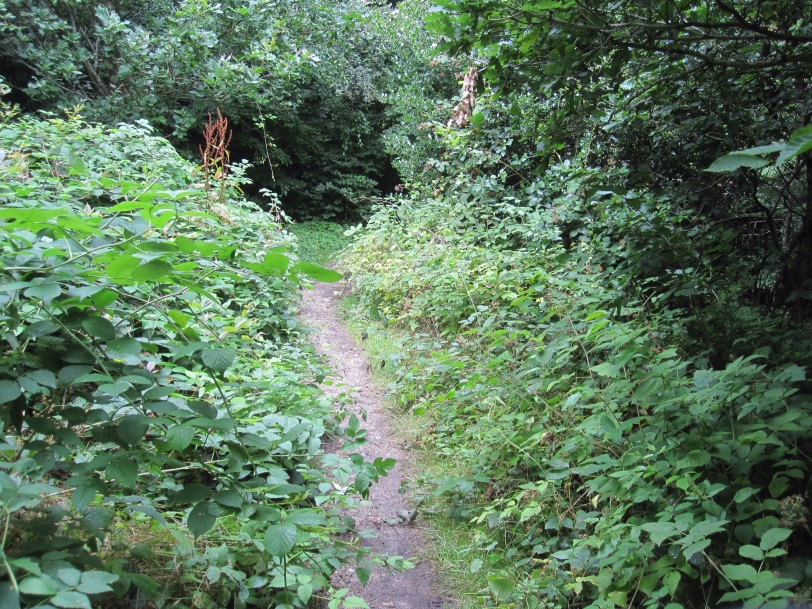 Hmmm. It was beautiful, but riding had definitely been slow up to this point–almost 2 hours to cover about 9 miles. We found the Green Man pub outside Prestwood and refueled in their picnic area to face the next segment. It’s a good thing we did. We had been following signs for both National Cycle Route 57 and Chiltern Cycleway, but were not sure whether they were the same. In Princes Risborough (English towns have great names, don’t they?) it started raining and we must have missed a turn. We found ourselves in the Chiltern hills (of course) and not on the route to Oxford. Fortunately, a couple miles of relatively easy (if wet) riding got us back to the route and onto the Phoenix Trail, a very nice shared-use path, where we could finally just ride for several miles. Our last pause in the riding day was at a bus bench in Worminghall (see?) to get ready for the last push into Oxford. 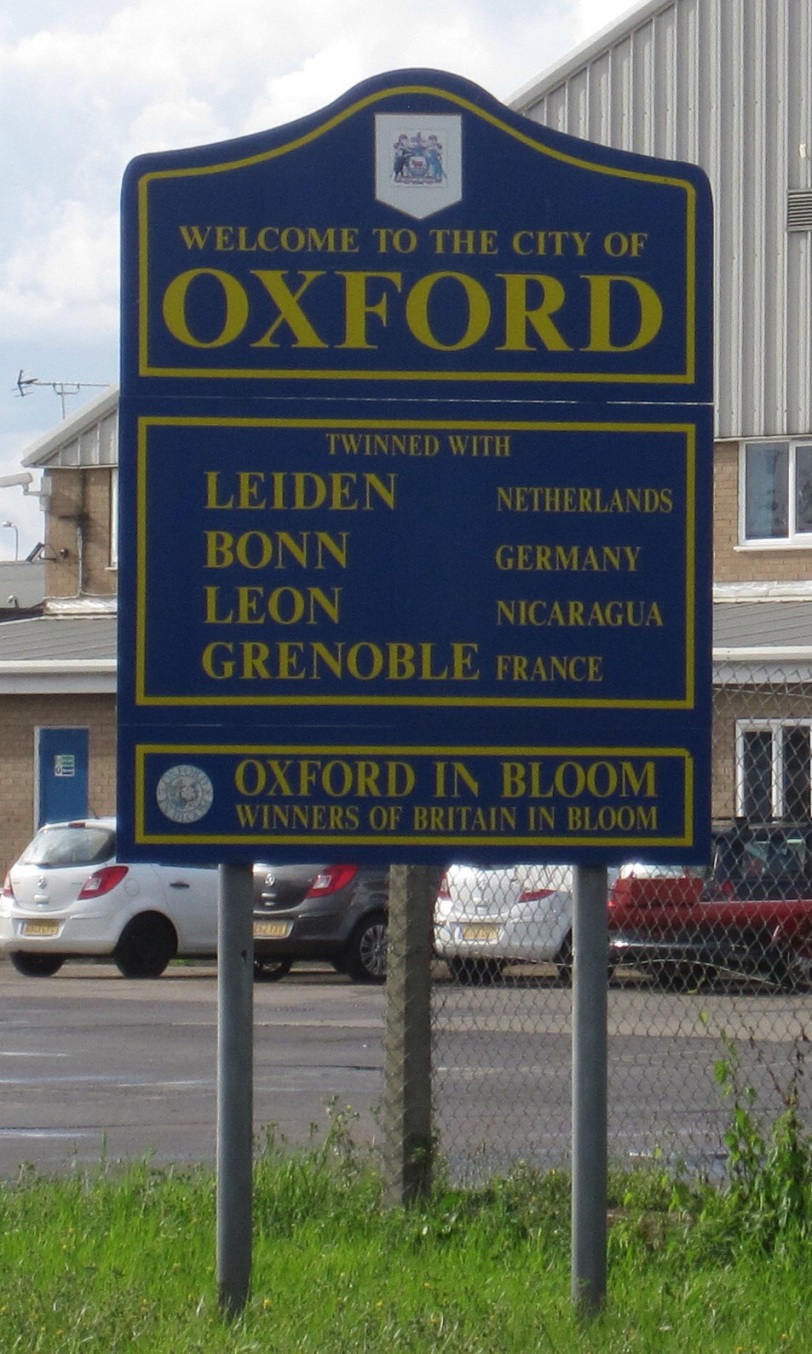 Oxford is well set up for cycling. Lanes and signage throughout, and the center is only open to bikes and buses (BIG buses) during the day. We slogged through the last few miles and found the correct place to check in for our stay at Christ Church College. 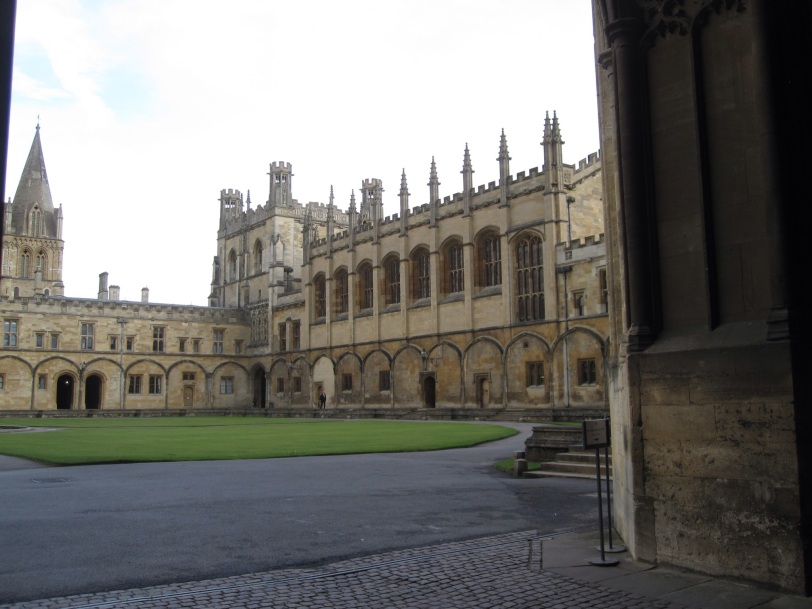 They have a cycle shed, which I would term a cycle cellar. We had to remove all the bags quite far from our room, but the bikes are locked up inside and within the College walls (which are open only to residents and guests) so hopefully they will be fine. Lugging 6 panniers, water bottles, and various small bags to our room (across a few buildings and up many stairs) made me really glad we had decided NOT to camp on this adventure.
I’ll say more about the room, the college, and Oxford tomorrow. For now, it’s time to sleep–great day. And hopefully Maureen still wants to continue the adventure after today…

4 thoughts on “Amersham to Oxford”