It’s Steeper Than It Looks

That was what a motorist said to us as she slowed down to pass us on a one-lane road here in beautiful Kent this afternoon. Yeah, I was walking by that point.
There was also one downhill that was steeper than it looks. We walked it, and were happy to since it was a narrow path and there was a gated entrance at the bottom. 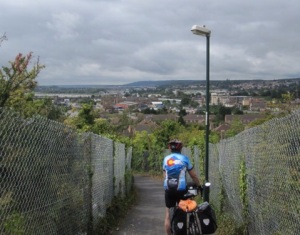 Today we rode from Gravesend to Doddington, about 35 miles, with a tad over 1200 feet of climbing. When we mapped it out last night, Google, using the route we did take today, said it was only about 30 miles. We have now decided Google underestimates by about 20%, and when there are hills too that makes for a pretty hard day of riding. I think we are both usually ready to be done at least 5 miles before we are finished on any given day. Not much we can do about it other than keep riding though.
However, we did ride through some pretty country today and most of it without jackets, which is a bonus. We were by the Thames and the Medway for the first part of the day but were not so close to the rivers after that. Also, I think there were more real roads and fewer paths “this” wide than on yesterday’s ride. There was one little stretch where the path was less than 6″ wide and I caught my leg on some stinging nettles. There are plenty of these on the paths we are riding and I hate them as much now as I did when I encountered them as a kid. But, as I said, we saw some lovely and cool stuff today, including when we stopped for lunch near Rochester by the River Medway. Most of the waterfowl are heard rather than seen, but we did catch a sight of what I think was a coot and baby coot at one point, along with a very shy stoat (rodent, not bird) that ran onto the path in front of us, saw me, and scurried away.
First view was a rusted out submarine that Angie noticed as we came down the steeper-than-it-looks hill. Bonus in this picture because she also captured Rochester Castle, a 12-Century castle that has one of the best-preserved keeps in England or France, or so says Wikipedia, and the cathedral, which is close by. 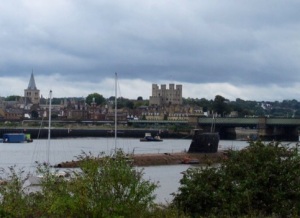 Angie also took some cool pictures of the bridge into Rochester even though it was “only” built in 1914. 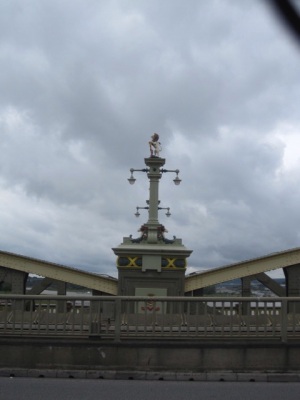 After lunch we slogged our way through a lovely but hilly part of the Garden of England, which got its nickname because of the plethora of apple and pear orchards. We were very good and did not pull any off the trees, even when this horse beseeched us.

And here’s one of the orchards, which was at the top of yet another obnoxious hill.

We finally made it to the Palace Farm Hostel, a bike-friendly hostel where we received a very nice greeting from our hosts. We cleaned ourselves up, enjoyed a huge pot of pasta that we’d cooked, and collapsed in a heap.
Final picture for today, the hill we didn’t have to climb:

3 thoughts on “It’s Steeper Than It Looks”