Today was the first day of our new plan and my first time ever in Belgium. So far, so good. We picked up some food on the way to the train station (breakfast was tasty, but consisted of bread and stuff to put on it) and walked to our platform. When the train came in, we experienced yet another method of bike transport and the first instance of having to pay extra for bikes on trains (sigh). The bikes (sans panniers) went into a compartment at the front of the train, so we got to carry our 6 panniers to our second-class carriage, which fortunately had luggage shelves large enough to accommodate them over our seats. The train was fairly empty for the first few stops, then filled up completely after we crossed into Belgium. We were very happy to have boarded at the beginning of the run and to have purchased the direct tickets. Unfortunately, we were not traveling to the train’s final stop and the crew had changed with the border crossing, so we were a bit nervous about the process of getting our bikes off the train. As it happened, many other people were getting off at Bruges, so we were able to round up our bags and get to the compartment containing the bikes fairly easily.
The hostel where we are lodging tonight had assured Maureen that they would (a) be open during the day and (b) be able to store our bags during the day, so we headed there from the train station. After stashing our bags, we took off on our (amazingly light!) bikes to see Bruges. We headed to the main square, known as the Markt, and Maureen got in line for (what else?) frites, while I went in search of an ATM and reasonably-priced Coca-Cola. I was far faster–Friterie 1900 is very popular for lunch. We went to find a place to sit and lucked into an actual bench that was being vacated. We enjoyed a lunch of frites, Coke, and packaged meat and cheese. And there was chocolate–it is Belgium after all.
Markt: 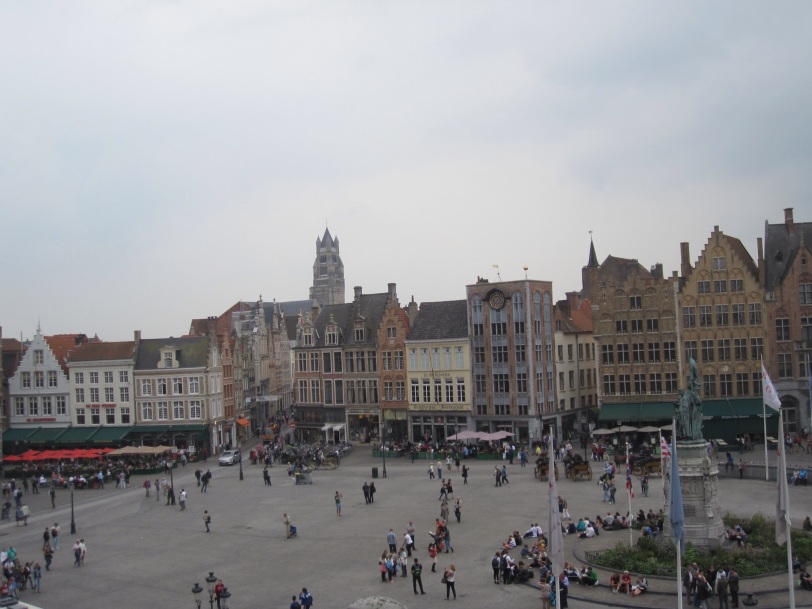 Our touristy activity for the day was the Historium. I’m not sure that I felt transported to the Middle Ages (the heyday of Bruges), but I was entertained and I learned a lot. Extensive work clearly went into this attraction–in each room/set, a video plays that continues the underlying story. Everyone gets an audio guide in their choice of nine languages. The English version was beautifully localized with no evidence of awkward phrasing or poor script translation. I imagine that the other languages were equally good, since the “making of” video in the interactive exhibition (their words) that follows the experience reports that they intended to spare no expense. It was quite dark inside, so sadly I have no pictures of the interior of the Historium. I did, however, get some snaps on their “panoramic terrace.” 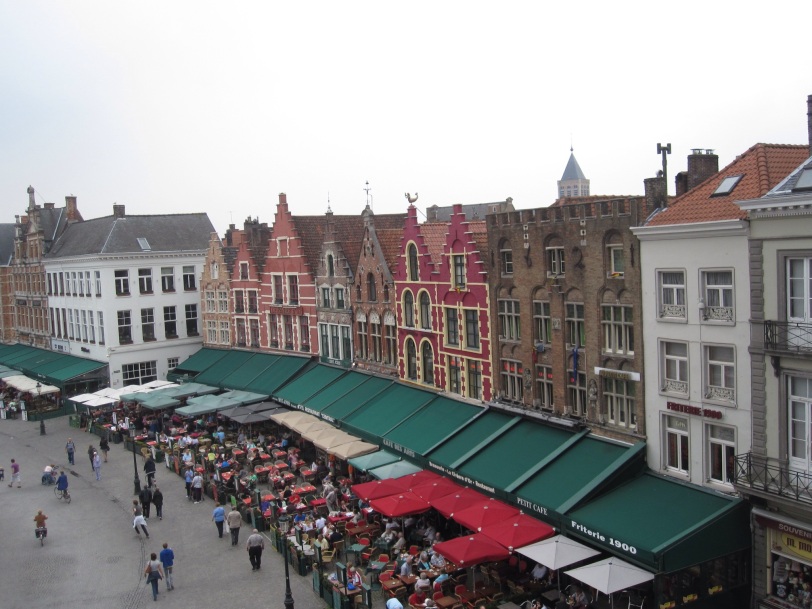 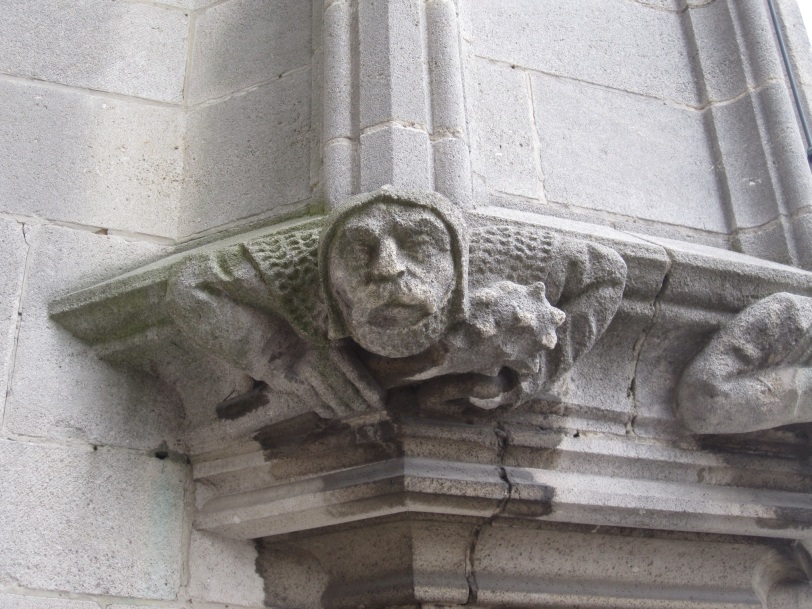 One of the most interesting things I learned at the Historium was that Bruges had, for about 500 years, a Waterhalle, essentially a market filled with water so that boats could come right in. Cool.
Since we had wheels, and no bags, we decided to ride around Bruges and see the canals and some of the city gates. Here are some pics: 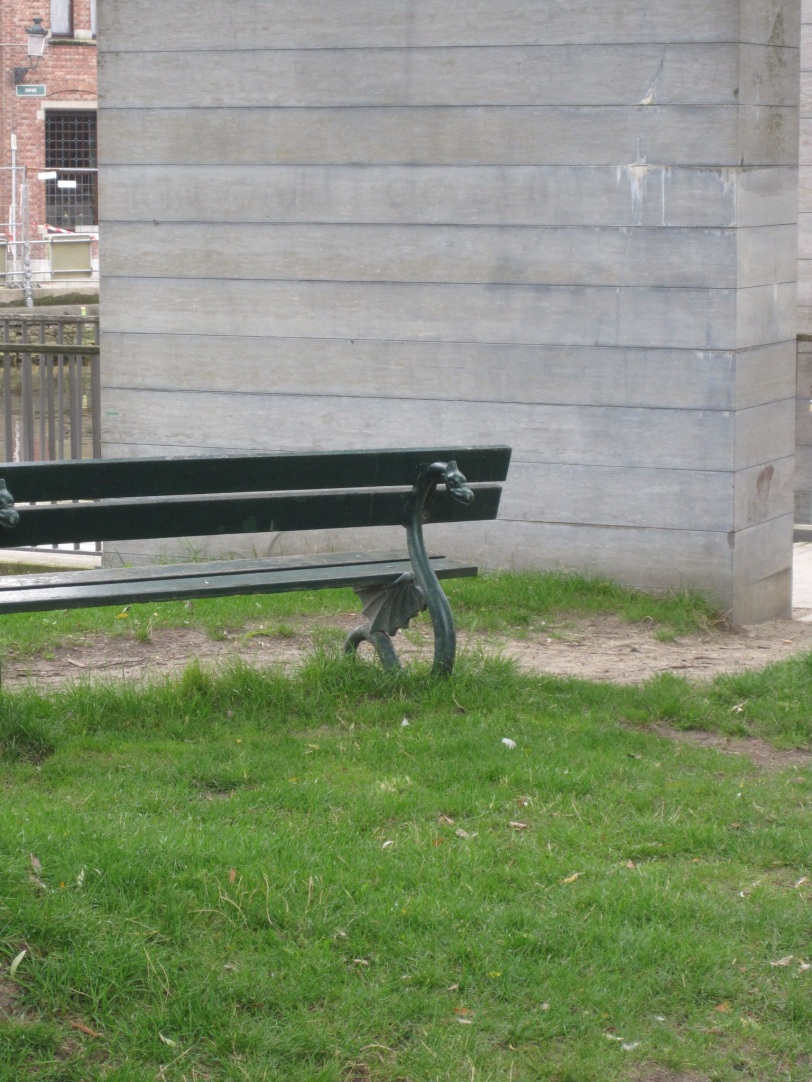 All this riding around made us thirsty, so we stopped for a beverage and to watch the world go by. Did I mention that everyone rides bicycles here? We saw an amazing variety of rigs and riders from the racer look we expect in the States to parents with cargo bikes modified for transporting multiple kids to pensioners toodling along on city bikes.
The rest of the day involved a ride back to the hostel, then another trip out on the bikes for dinner (sadly, the hostel has no cooking facilities and Belgium and France are proving to be not much less expensive than England). We visited the Markt and Burg squares again to see them in evening light, then verified our route out for the morning. All in all, we managed 12 miles on this non-riding day!
Tomorrow, a full riding day. Yay!