Angie and I have concluded that our favorite days are those in which we ride, notwithstanding the weight of the bikes and the odd tumble each of us has taken. Which means we are possibly going to be very sad women when the weather changes and the route becomes less forgiving and we have to say buh-bye to the bikes.
Today we rode one of our longest rides since we rode from London to Oxford (a touch under 40 miles), except much, much flatter. It was still a slow go because of the large number of river and canal crossings required (more on that below) and also due to route finding. We were flying without a net once we got onto Vlaanderen Fietsroute 2, Flanders Cycle Route 2, after being on LF5 for the past few days. We’d found a great map book at Stanford’s in London for LF5 and some other routes, but it didn’t have LF2 in it, and since the SIM card on my phone doesn’t cover Belgium, we had to rely solely on the GPS and hope that we would make it to today’s destination, Mechelen, before the battery ran down. The Flanders bicycle route system is exceptionally well-marked on the whole and has only been confusing once or twice (yesterday’s detour of a detour being a case in point) so we made it to the outskirts of Mechelen fairly easily. Once close, Angie plugged in the address of our destination and just like that (and over more cobbles) we were here.
Before I say what little there is to say about Mechelen, I’ll backtrack a bit to talk about food and ferries.
First of all, breakfast at the bed and breakfast. We really didn’t know what to expect this morning but I think we were both amazed by the giant spread provided for us by the owner of the B&B. She provided a pot of very excellent coffee, accompanied by numerous breads, yoghurt with fresh fruit in it, melon, and an egg, cheese and meat thing that was sort of omelet-like and very tasty. And of course sliced cheese and meats, most of which we did not eat because we’d stuffed ourselves silly on all the other good things. We had a good day of riding and didn’t wear down as much as we have on the days of mediocre hostel breakfasts, even though we had to stop a lot to wait for ferries and locks. We were on two different rivers (Schelde and Rupel) plus a couple of canals today, and had to cross over several times to stay on our route. It certainly is challenging figuring out how a ferry or controlled crossing works when you don’t read the language, but Angie managed to utilize her German skills to figure out the Flemish and determine that most of the ferries do a crossing every half hour on Saturdays. You just wait on the dock until the ferry comes over. We were never on the starting side for one of our three ferry crossings today, but the crossings themselves take less time than it takes to load and unload and to cast off so it was no biggie. The longest wait was for our first ferry, when we were still confused about how it worked. The only ferry we encountered yesterday was one where you rang the bell and the ferry boat woman came out of her little hut, went down to the ferry and took you over. We just witnessed this, didn’t take a ferry yesterday. Today there no bells so we were initially confused but soon got the hang of it.

There were other types of crossings too, including a giant mechanical lock where we waited for one side to open for about 10 minutes before dashing to the other end of the lock just in time to ride over before it closed on us. And even a bike bridge that seemed to be reserved for bikes only.

A couple of other notable sightings before I finish up with a report on our host city for the night. One was this bird, which Angie is trying to identify. The £2.99 on sale bird book we found at Kenwood House is failing us in this case, so she is researching the. 40+ types of goose, duck and swan found in Belgium to get to the bottom of it. She has discovered that it’s an Egyptian Goose, which is not indigenous. I’m sure that this is a surprise to our readers given its name. They were introduced as ornamental birds and stuck around. Yay Angie for figuring this out. 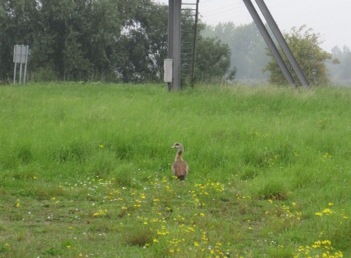 One other cool sighting was this Kastel. 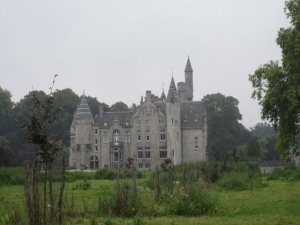 Apparently, this is Bornem Castle, also known as the De Marnix de Sainte-Aldegonde Castle Kasteel van Bornem, or Kasteel de Marnix de Sainte-Aldegonde. This particular structure was built in the 19th century and is still in the hands of the family that has owned it since the 17th century. The owner is John de Marnix de Sainte-Aldegonde, 14th Earl of Bornem (thanks Wikipedia).
Anyway, I promised I’d report on Mechelen, and you’ve probably figured out that I don’t have much to say. It has squares, cobbles, and winding streets, like maybe it had its roots in the Middle Ages or something. The owner of the B&B we stayed at last night couldn’t imagine why people would want to visit here, though I have to say it has a very imposing looking cathedral and a pretty town hall. For us, the key takeaways are that the restaurant called Stuffed that is allegedly on the Groot Markt is hard to find, and the Irish pub has a limited menu but really good burgers and fries.