So, Maureen has given you some details of our days on the Rhine and in Switzerland, and I am going to wrap up this segment of our trip with an overview and some recommendations.

I did pre-trip research for this segment using The Rhine Cycle Route: From Source to Sea by Mike Wells (Cicerone, 2013). In this book, the direction of travel is from west to east. This was also the direction of travel for most everyone we met (and not just because we passed them going the other way ;)) Hmmm. Perhaps I should have considered why this is the case? Traveling in the same direction as the river flows is probably a good idea. Noted.

Signage varied significantly along the route. In France, the Rhine-Rhone canal portion was well-signed (as R-R and sometimes Eurovelo 15) and easy to follow, but local signage off the main route varied widely in quality. In Switzerland, the route was challenging to find and follow in and out of Basel, but well signed (usually as EV 6 and Swiss route 2/EV15) and easy to follow elsewhere. Today’s route in Germany diverged from the EV 6–to be rejoined by us in a couple days–to follow EV 15, usually signed as German route 8. It was extremely well marked, both on signs and on the road itself. 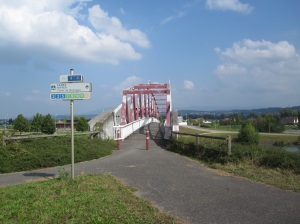 Our trip along the Rhine was happily interrupted with a detour to Zurich for a wonderful 3-day visit with my friend and former office-mate Carrie and her lovely family. Up until that point, we had not really seen many cycle tourists. That changed markedly as we pedaled east in Switzerland. Apparently, several bike touring companies run guided and (more commonly) self-guided tours around Lake Constance (Bodensee). This might also explain why hotels were scarce and expensive along this route. Apparently, this is still high season despite school being back in session (admittedly, most of the people we see appear to be pensioners).

As a result of full and expensive hotels, we have been at youth hostels all this week. The last two nights, we have chosen the half-board option. For an extra 5€ per person (we are in Germany now), you get a full dinner, including salad bar. This is quite a deal, and the food has been good and plentiful. That said, hostels are challenging with their shared dorm rooms, showers on the hall, and herds of teenagers (school groups). If, as in our case, you have much more time than money, hostels and self-booking are acceptable compromises. However, if you are doing this for a one- to three-week holiday, I strongly suggest that you book through a tour company. The more affordable companies (rad and reisen catalogs seem to be found in the local hostels) do self-guided tours with half-board for what works out to about €200/couple/day, excluding bikes. While we are spending less than this, it means sharing rooms, sometimes (too often) sleeping in top bunks, and spending a lot of time and energy booking the next few places to stay. Also, the tour companies usually carry most of your stuff and give you maps and cue sheets!

And while I am making recommendations…
They have this wonderful contraption over here (yes there are some in the States too) called an e-bike. We saw them sporadically before Zurich, but over the last few days we have seen them everywhere. About half of the tour company riders seem to be using them. Although it is a little discouraging to get passed by octogenarians on hills, it is fantastic that the e-bike has made bicycle touring accessible to many people who would otherwise be limited to bus tours or a few flat km per day. If you don’t regularly ride many miles a week (with hills), or struggle with hills in general, or fear that you can’t keep up with your travel companions, I would recommend considering the e-bike option. If I can, I’ll try to rent one once we’ve shipped our bikes and give a more detailed report then.
Tuesday’s ride took us from the castle where we stayed Monday night (Schloss Laufen) to Konstanz on the Bodensee (Lake Constance). There were two scenic highlights, one of which came a few downhill meters into the ride. The largest waterfall in continental Europe by volume, the Rheinfall is quite spectacular. We paused to walk to viewpoints and try to capture the power of the water in photos.
Rheinfall and Schloss Laufen 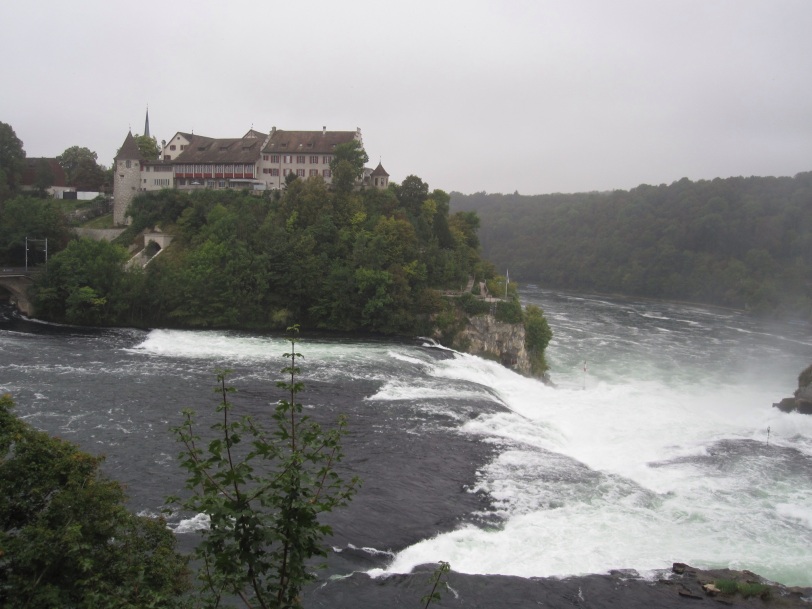 (Note the stick deer in the map picture)
Much of the day’s ride was slightly uphill (see notes above about directionality and e-bikes) and pretty, but not as spectacular as the previous day. We did see this covered bridge is Diessenhof at one of the many points where it is possible to cross between Switzerland and Germany.

The other scenic spot along this portion of the ride is the medieval town of Stein am Rhein. It has been pedestrianized and touristized. It is beautiful, though, and has a very nice bike shop where Maureen was still unable to get a kickstand (which would have been helpful on this entire trip). We paused to spend our last 10 Swiss francs on a pair of tasty macchiatos before crossing the bridge to leave Switzerland.

Another plus of this riding segment has been public (complimentary even) WCs in almost every touristy town. (Outside one of the WCs was the cool bike rack pictured below). It’s amazing how much stress this removes from the day. Our youth hostel in Konstanz was of course at the top of the hill, and we were of course in a room on the 4th floor. (More advice: Try to pack in 2 panniers per person if you can. You will be hauling all your bags up to your room every night. With a 4-month trip spanning three seasons, we unfortunately have more than 4 total panniers.) 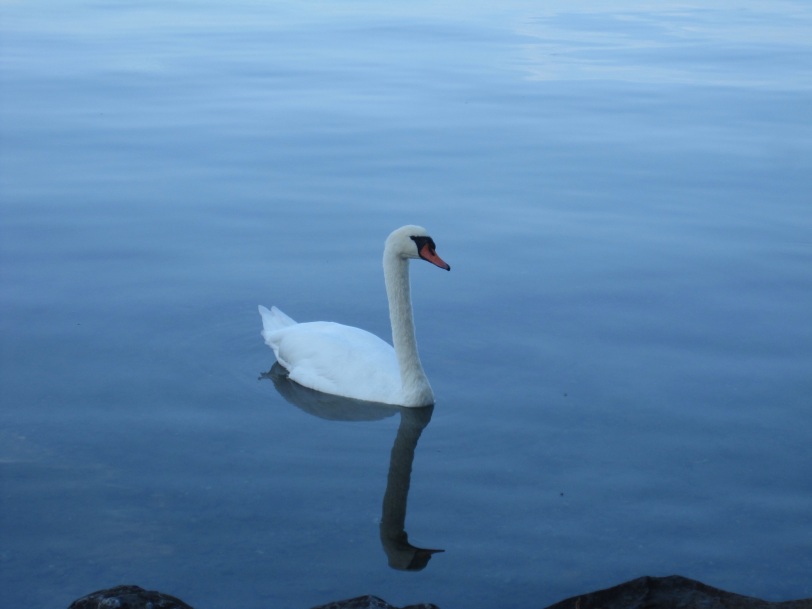 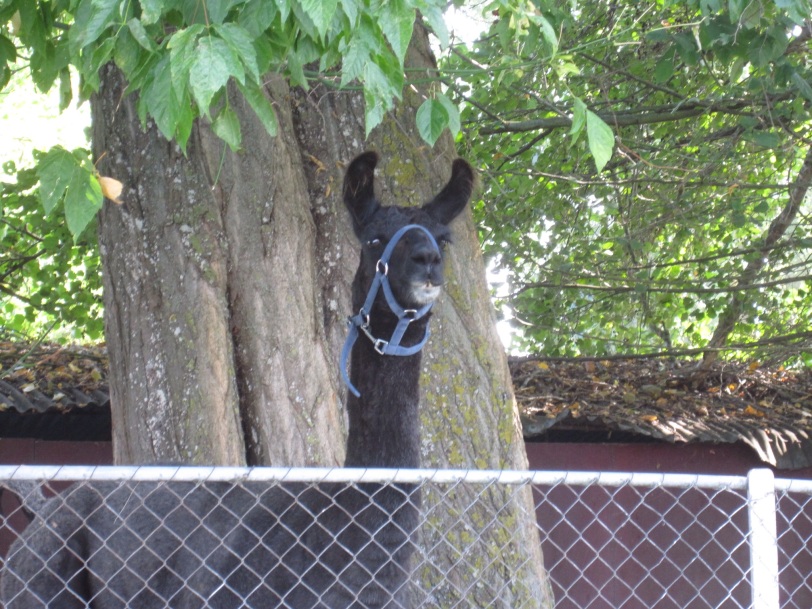 And now the report on our last (only, really) riding day in Germany. After two long, hilly days in the saddle Monday and Tuesday and two nights of really marginal sleep, we decided to “cheat” a little on Wednesday. The route required a ferry trip to Meersburg to continue around Lake Constance. I looked at the map and determined that if we took a boat to Friedrichshafen, we could cut our ride distance to less than 30 km. The journey from Konstanz to Friedrichshafen is served by “cruise ship” (their term) and catamaran. We chose the slightly smaller and less expensive catamaran. The journey cost 30€ (for 2 people and 2 bikes) and took about an hour. It was a welcome relief and allowed us to have a leisurely last day of cycling by the sea. We still didn’t feel we had quite enough time for the Zeppelin museum in Friedrichshafen, but we stopped for coffee, and lunch by the sea, then detoured slightly onto Lindau island to buy train tickets to Passau, and still arrived at the hostel by 3 pm.
Zeppelin near Friedrichshafen, where they still build and fly them.

Lindau island is pretty much like any other resort town by the water. Restaurants, hotels, shops, ice cream stands, hundreds of bikes–that part is not as common in the US–and so on. We did our grocery shopping away from the island near our hostel, had dinner (meatless Mittwoch, but quite varied and good) at the hostel, then wandered back to the island for ice cream and views of the sun setting. We spent some time in the wifi zone in the hostel lobby, then retired for an actually restful night of sleep (only one, quite nice dorm-mate).

Thursday is a transfer (read: train) day to our next and last biking segment along the Danube.