So Monday was a red letter day. Reinforcements arrived. “Such as they are,” said a rather jet lagged Pat!
Pat being Angie’s mom, who arrived along with Janet, Pat’s sister-in-law (Angie’s aunt). They are going to be spending two weeks with us in Italy. Angie took the bus out to the airport at some insane hour. I walked down to the bus stop with her and was pretty proud of myself for remembering the way there and back. On the way back to the flat I also detoured to confirm the location of the local market and bakery.
The reinforcements arrived at the flat around 9:00, shortly before our “landlord” arrived with an electrician to try and fix the issues that have deprived us of hot water since yesterday afternoon. Sandro had been here at 10:30 last night and discovered that the lack of hot water was related to the outlets we had noticed were not functioning. A breaker had tripped and would not reset. The electrician did manage to get it sorted and Angie celebrated by taking a shower!
After our newcomers had eaten and rested for a while we set out to grab a bite to eat and go to one of the many markets where Romans do much of their food shopping. We ate lunch at a place near to the Vatican walls. It was very close to our flat, which is usefully located pretty close to many of the sights we plan to visit. The flat is a traditional Roman apartment, with an inner courtyard, marble halls, a wire-caged elevator, and large rooms. The kitchen is quite well equipped though the pots are a bit more lived in we would prefer, but at least we can cook.
The market was not too hard to find but was closing down for the day by the time we reached it. However, we did manage to pick up some fruit and vegetables after agreeing on a basic menu for dinner. We then headed to a nearby (and quite well-stocked) Carrefour to get meat and some other items that we thought of as we fleshed out our meal plan for dinner and breakfast. It was definitely a better store than the Pam we went to yesterday.
We had talked about possibly visiting St. Peter’s Basilica after this, but the new arrivals were pretty beat after their transatlantic flights, so we decided to save that for another day. We came back to the flat so Pat and Janet could rest. Angie and I popped out to the bakery that I’d scouted out this morning and then went for a longer walk, following our own version of the Rick Steves walking tour. We went to the Spanish steps, which are one of those things you are supposed to see, even though I’m sure most people don’t know why they are significant (and if you ask me, they’re not that significant). There were so many people sitting on them, the effect is lessened anyway, not to mention, the church they were designed to connect to is under renovation, which means it is covered with a “wrap” that has a picture of the church, well except for the bit where there’s a HUGE ad. 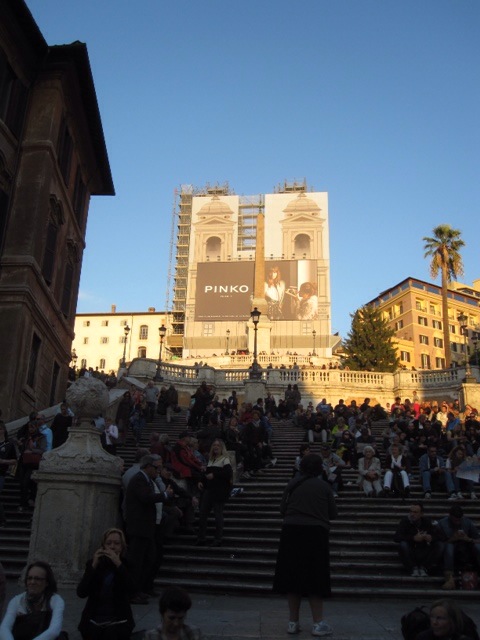