Rome was not seen in a day, Part I

Or, I love Bernini
Wednesday in Rome. (October 29)
I don’t know how I didn’t know the work of Bernini before coming to Rome, though traditional/Renaissance art is not historically my thing. We’ve had a really busy week, but one thing I’ve learned for sure is that Bernini was one heck of a talent. How I learned this was by visiting, with Angie, Pat, and Janet, the Borghese Gallery. I’m not going to go into a ton of detail since Angie wrote about this since it was her birthday. I will just say that I really liked some of the Bernini pieces there, including the Apollo and Daphne piece, and was impressed with the realism the sculptor imparted. We’ve gone out of our way to see many of the other Bernini pieces around the city as we’ve toured, including a piece called St. Theresa in Ecstacy at one church, which actually may be my least favorite of his pieces to which I’ve been introduced this week. This one may actually be my favorite, because of the expression on David’s face.

Wednesday was a special day, even for this Jewess. We got up pretty early to attend the weekly audience held by the Pope in St. Peter’s Square. We got there pretty early and found decent seats, though of course if you haven’t done it before you don’t necessarily know where the primo spots are, which turns out to be close to the barriers because that’s the route taken by the Popemobile. While we were waiting, a young American woman came up to us to ask what was going on. She had gotten up early to do something at the Vatican, maybe see the Basilica or the Vatican Museum, and she didn’t know that the Pope gives an audience every Wednesday when he’s “in town.” She decided to hang around and watch, rather than heading off to see if she could get into the museum. The church is not accessible during the audiences so that option was off the table but sometimes it’s easier to get into the museum because the crowds are in St. Peter’s Square. Me being me, we talked quite a bit and I learned about her semester of study based in the Netherlands and how her group was having a study week in Rome.
The pope was due to arrive around 10 A.M. and speak at 10:30, but he showed up early to do his tour of the crowd in the open-topped Popemobile. Of course, as is so often the case when you have to sit and wait for something for a long time, not long before he showed up Patty and Janet had left our seats to find a bathroom. They could not get back in to our section once the Pope started doing his circuit. This actually turned out to be to their advantage, because they got stuck in a spot where he came by quite close to them, and got some great pix! I have to admit that when he came close (relatively speaking) to where we were (standing on our chairs by then, just like everyone else), I did get chills. Francis has done a lot and shown great leadership in the short time he’s been pope, and, given my politics, I like a lot of what he’s done and he is in a position to influence a lot of people, so I admire him greatly. This picture came from the American woman I mentioned above. Thanks Amanda. 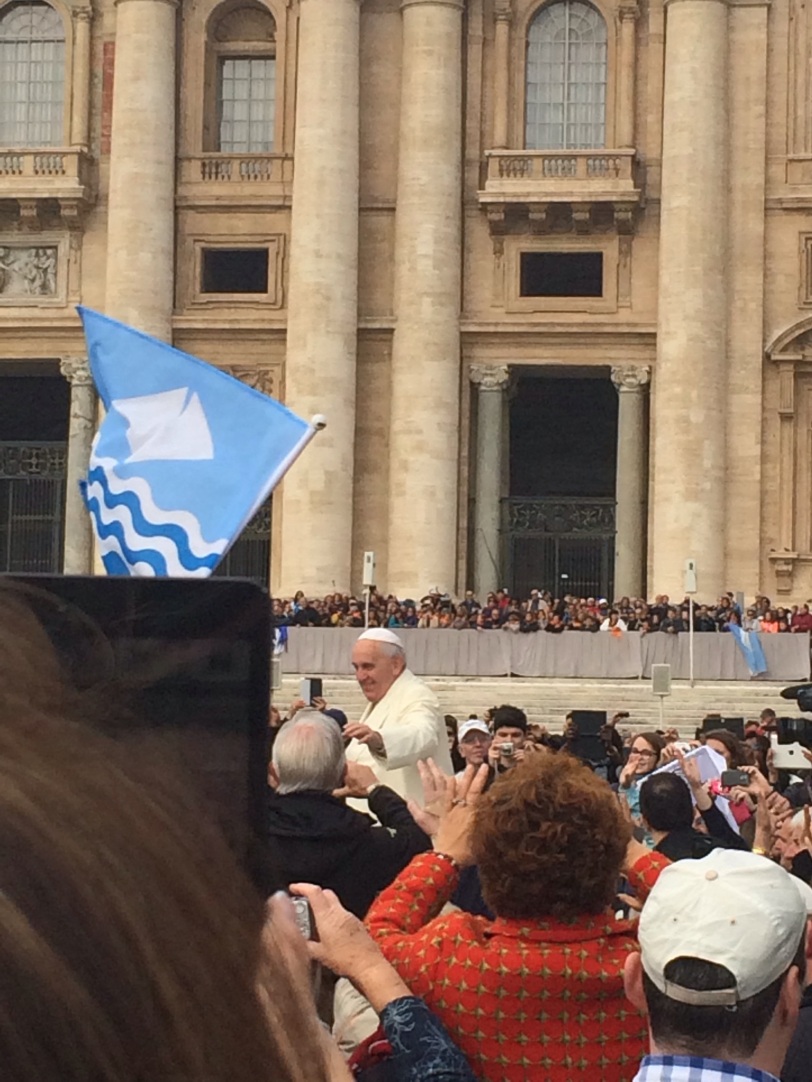 More photos from our time in the square: 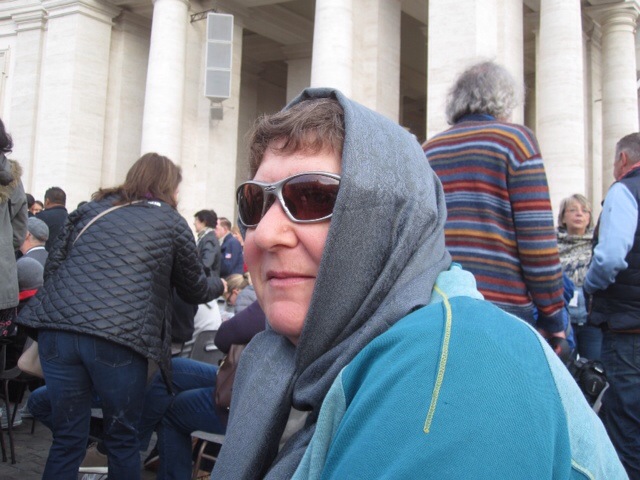 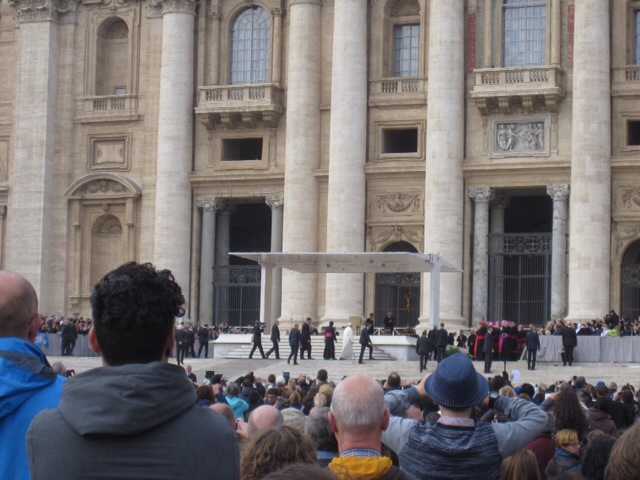 I think the big deal for most people is the meet and greet rather than the speechifying, which was rather innocuous, based on the summary read out by a British bishop. Of course, this week the Pope has been making some pretty groundbreaking speeches, including about evolution, so talking about something more basic would not have sounded so momentous to me. It was clearly a special occasion for a lot of people. When the official parts were over, the Pope took his time leaving the square, schmoozing with other people in the audience, which meant that although we waited around for quite a while, the Basilica did not reopen. We had considered trying to go in right after the audience, but that wasn’t looking likely, so we decided to go back to the flat for lunch and try again after that. Not so much. When we got back to St. Peter’s Square, the line was all the way across and then some. So we found a place to sit down among the throngs and figured out an alternative plan. Since we already had plans for most of the key sights, we had to have a good think about it. We decided to go down to Piazza Navona, which has another Bernini piece, and then maybe to the Pantheon, which was on the want-to-see list for Janet and I. Piazza Navona is home to one of the most notable pieces by Gian Lorenzo Bernini, The Four Rivers. I loved reading this story about it online. It was pretty awesome, with some exotic elements that probably were not as well known as they are now, like armadillos. We popped into St. Agnes, which is also on the piazza, since Angie’s mom had been here two days already and still hadn’t been able to see the inside of a church yet. Trivia note here: we learned during our tour of the Vatican Museum that in Rome a square cannot be called a Piazza unless it has a church on it. Otherwise it is a largo, which is large road. This to me is reminiscent of the English rule that a town can only be called a city if it has a cathedral. After leaving the church we tried to go to a café on the Piazza to get some gelato, but their prices to sit down were prohibitive, so we worked our way toward the Pantheon and Angie located a place near there to try. The gelato was good and interesting, but we both agree that the best gelato we’d had so far was in Nafplion (granted, at an Italian place).
We got to the Pantheon around dusk, and the square outside and the building itself were still pretty crowded. We just walked around the interior for a bit. Hadrian built the Pantheon in 120 AD. Its domed interior inspired St. Peter’s dome. The bronze doors are original and the interior has been preserved about as well as any ancient Roman building. Raphael, one of the great Renaissance artists, is buried there. The Pantheon been used continuously since it was built. 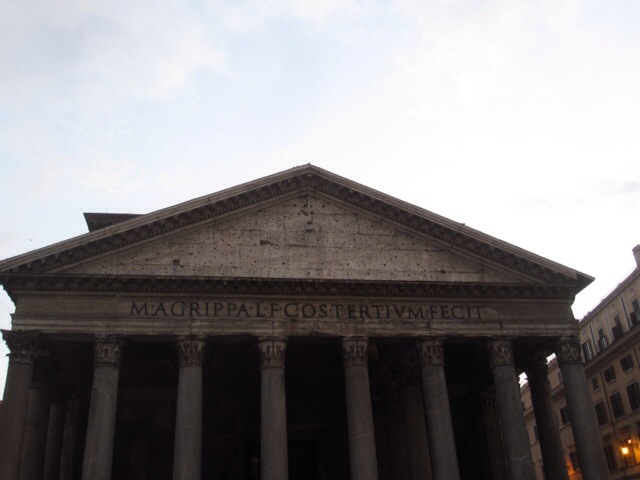 In the evening, Angie and I met an old friend of mine for dinner. Marina Coscia and I worked together at SDL and easily hit it off when we met face to face at a team event in Maidenhead. We’ve kept in touch over the years and I couldn’t come to Rome and not see her and her partner Agnieszka. They picked us up at our flat and we walked a few blocks to a restaurant they knew that is on the street on which we’ve been staying. We had a lovely evening. The meal was pretty good (Angie and I both had pizza but the other two seemed to enjoy their traditional Roman dish of tripe) and even better, it was delightful to hang out with Marina and Agnieszka. The conversation ranged over a wide number of topics, which is a great sign you are hanging out with cool people. Given our wifi woes, Agnieszka offered to do some research for us regarding trains for the next legs of the trip. It was most useful. She sent the information she’d found to us on Thursday, prompting us to conclude that it was probably better for us to drive from Orvieto to Assisi and on to Florence. Therefore, we reserved a car for pick up in Orvieto. We could have booked the car from Rome too, but there was concern about getting out of the city with me driving, so we figured the train is a better idea, despite having to negotiate the sometimes treacherous Termini Station. Inattentive travelers are easily preyed upon there so we need to be super aware on the way to the train. We did decide to take a cab, rather than the metro to the station, since we have a lot of bags to negotiate and the nearby metro stop at Ottaviano only has stairs.
To be continued.