We have a new acronym, ABHT, another bloody hill town. (See the blog from October 17.) After schlepping, by train, to lovely Orvieto on Sunday, our next stop was to be Assisi. We had all decided that instead of taking the train from Orvieto and then on from Assisi to Florence, we would drive. This would save us many transfers and schleps to and from train stations with heavy bags. Therefore, after breakfast on Monday morning, Angie and I trekked down to the “new town” part of Orvieto (a pretty painless walk to the funicular and took that down to the train station, which was close to the Hertz office) to pick up a rental car.
When we reached the funicular station, we gasped as we saw the morning mist over the valley. Angie took some cool pictures. 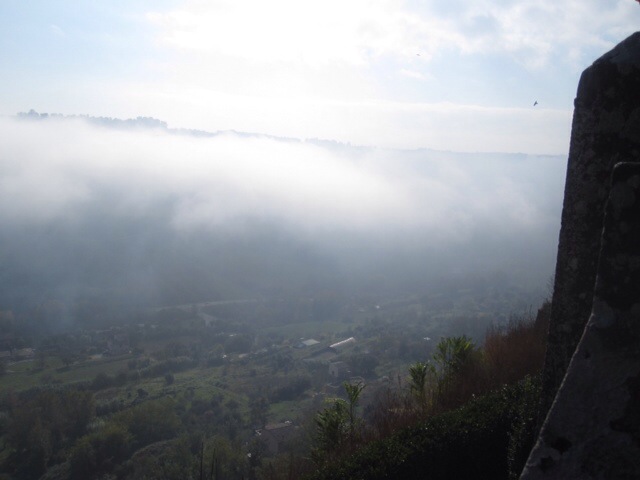 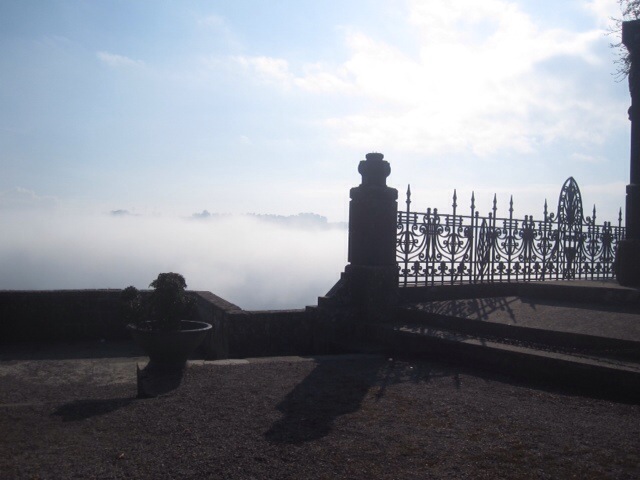 Like so many things on our trip, the task to pick up the car was more complicated than it needed to be, since the car that was reserved for us was not ready, and had to be picked up by the gofer guy from some place that was not nearby, then washed and vacuumed before we could leave with it. That took close to an hour. None of the in-and-out in 10 minutes that you get at US car rental agencies. We were a tad anxious when the car still wasn’t ready at 11:25, given that we needed to check out of our hotel at 11:30 and that necessitated driving back up some winding roads to the old town. We managed to finally get back to a parking spot near the hotel and while Angie checked us out, I went to our room to get Pat and Janet, and start hauling our bags downstairs. The hotel people didn’t seem too unhappy that we were cutting the timing so fine but Angie and I tend to be rule followers and we don’t like to inconvenience people. The hotel has a 11:30 AM checkout and a 1:30 (13:30) checkin so we know they would need the time to prep the room if they had more guests arriving.
So, my first experience ever driving in Italy was driving a car I’d never driven before (Fiat 500L). With a stick shift, which I haven’t driven in over 10 years. On streets that were barely wider than the car. In the mountains.
The first thing I had to get used to was finding first gear instead of trying to start from third. Only took two or three tries. Then we had to load the car with four suitcases, four backpacks, a bag of food and four women, and head off toward Assisi, the second hill town on this leg of the trip. The descent from Orvieto was challenging, especially since Angie prefers to drive when we are riding on switchbacks and I was worried about making her feel ill. But we had set things up so only I could drive so that’s the way it was. It was actually ultimately for the better because we work best when I drive and Angie navigates, since she’s a very good navigator. We plugged along and got onto a highway and started thinking about LUNCH! There are supposed to be a ton of cute hill towns in Umbria, though we didn’t really know what was a hill town and what wasn’t. Seeing a sign for Perugia, Angie and I decided that it would be a good spot for lunch. The name sounded familiar and we were sure Rick would have some recommendations for places to eat there.
So, I wound the car up the mountain, around more switchbacks, looking for parking near the center, in an attempt to minimize walking and steps/hills. I’m sure you can imagine how that worked out, and if you are friends with Pat Powers on Facebook, you don’t have to imagine. 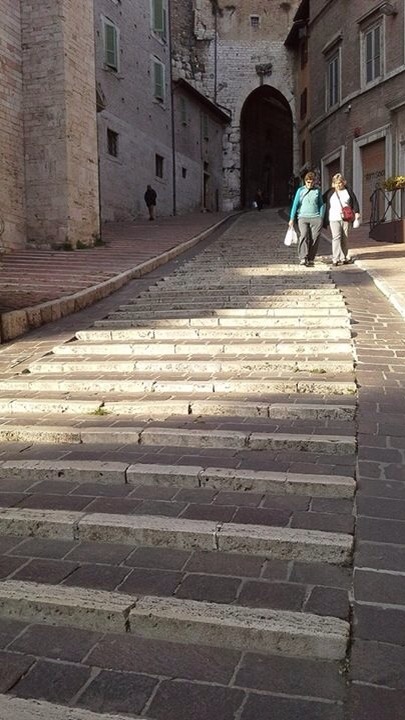 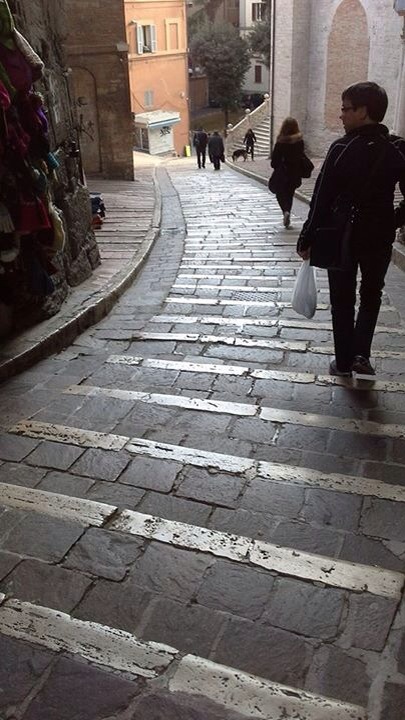 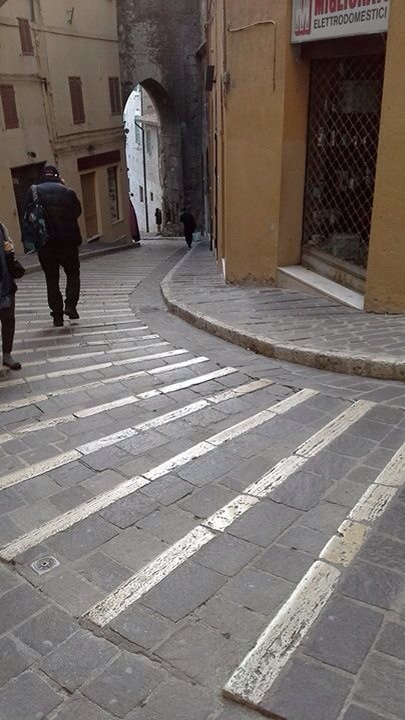 When we parked, Angie got out the Rick Steves and discovered he doesn’t even mention this town. But she knew she’d read about it somewhere. So she pulled out her iPad, on which she’d downloaded a Rough Guide book about Italy. She found the Perugia section and some recommendations, including a pizzeria that they said was probably the best in Umbria. We plugged the name of the rough address into Apple Maps and started up the hill, much to the concern of Pat and Janet. On the up side, there were some tremendous views from this lovely town. 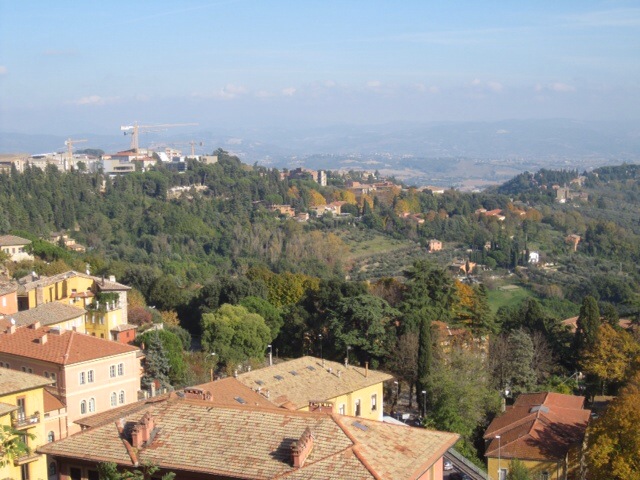 Another tangent here. I am famous for my tangents. On this part of the trip at least, we’ve found that Apple Maps is more useful than Google, which seems to not know where we are some of the time. Sometimes, I try both but we’ve generally had more luck with Apple and the English male voice of Siri.
Back to the story. We trekked up and up, climbing some shallow but steep steps. Janet and Pat wanted to give up and just pick a random place, but suddenly, we were there. We walked into a full restaurant and the warm glow of a real wood burning pizza oven. 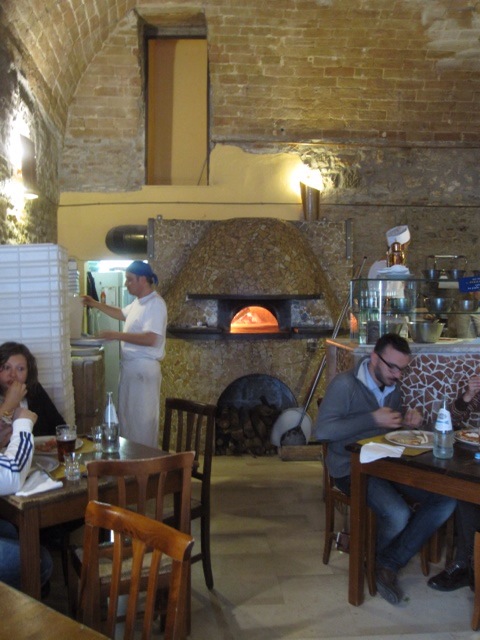