I am liking the slow starts. It’s nice to feel like we can be calm in the morning and not always have to be rushing to beat the other tourists to the best sights. Such are the luxuries of off-season travel.
The rain caught up with us today, though not at all to the extent it’s still raining in southern France and northern Italy. It was rainy lightly when we left the flat around 10:30, so we decided to walk across the Bastille and Marais neighborhoods to the Centre Pompidou. We enjoyed the walk (though I do wish the sidewalks were a tad wider), especially the art galleries near the Place des Vosges. Upon approaching the museum though, we realized that we were already hungry. “Rick” had warned us (through his Paris guidebook, obtained electronically for this 8-day adventure) that the cafés inside were expensive and suggested a couple of places nearby. We selected Dame Tartine and were pleasantly surprised with the quality of our 10€ lunches and the prices of our caffe Americanos (or large black coffees, as our waiter clarified). Fueled, we walked by the curious fountain and across the plaza to the museum entrance. 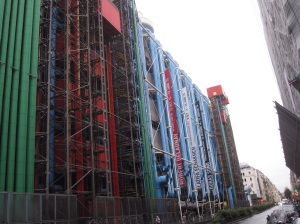 Again, we chose the self-service machines for ticket buying (get that chip card, fellow travelers) and then checked our bag and raincoats. We sadly did not get a picture of the system that they had for checking umbrellas, which was similar to mail slots in an office or hotel.
Our first stop was the temporary Frank Gehry architecture exhibit. It was fantastic. They had models and drawings for many, many of his buildings (realized and unrealized) and several videos that were in English (yay!) with French subtitles. We could have stayed longer here, but we were on a bit of a schedule, so we moved on to the permanent collection.
One of the many models in the Gehry exhibit: 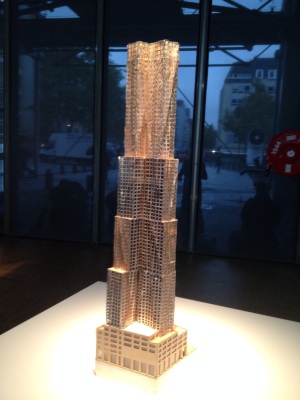 The permanent collection includes art from 1905 on, with 1905-1960 housed on the 5th floor. We first went to the 6th floor, to see the “magnificent view” of Paris. It was raining and cloudy, so we could see *most* of the Eiffel Tower…
On the 5th floor, we wandered around, taking in the varied collection, which changes so regularly that no guides to the paintings and sculpture are available. We enjoyed some Picasso, Mondrian, Matisse, Leger, Kandinsky, Ernst, Giacometti, Pollock, and of course Chagall. We also liked the two pieces by Tamara de Lempicka, a Polish Art Deco painter with a life story that reads like a soap opera.
John Deere? (Actually Der Hirsch by Jean Arp, so Jean’s deer :)) 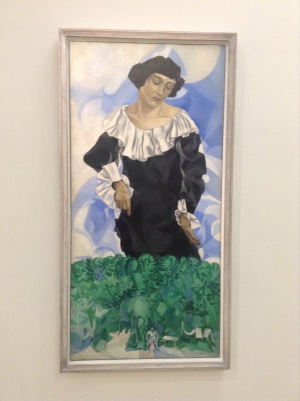 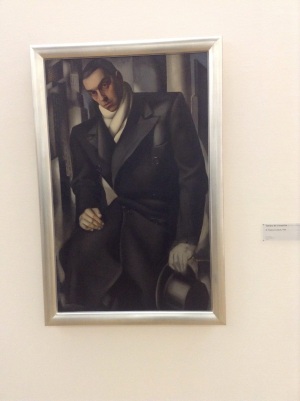 I was not as impressed with the 4th floor, which contains art from 1960-the present. I think it is much harder to appreciate the art of your own era, because it is not part of the culture in which you grow up, so it tends to seem foreign and sometimes jolting.
Some 4th floor art: 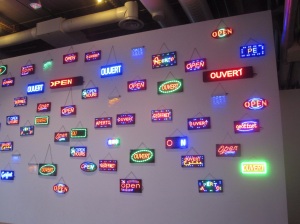 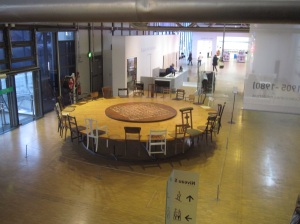 Besides, we had plans, so we retrieved our things (not even taking time for the shops!) and headed out. (Aside: We revisited the Pompidou on Sunday to use the WCs that we knew were outside the ticketed area and had a chance to look at the shops then. The bookshop is phenomenal!)
It had pretty much stopped raining, so we decided to walk the 20+ minutes to our next destination, Le Valentin Salon de The, instead of finding a Metro station and undertaking a journey that included a change at Republique. We had already learned that changing trains at Republique can require a 5-minute or longer walk underground, so this option is saved for times of rain or long journeys. We arrived at Le Valentin right at 3 pm to meet my cousin Jenni and her 2 1/2 month old daughter Nora.
Maureen looking content

One of the joys of Paris is the so-called “cafe life.” We certainly enjoyed it on this day. Jenni and I drank tea from lovely pots while Maureen opted for coffee. We all had a decadent sweet treat too, of course. We spent a couple hours talking about our trip, particularly the recent family portion in Italy, and hearing about Jenni’s parents’ recent visit to Paris. And, of course, cooing over the baby. Nora slept pretty much the whole time and seemed not to mind the attention that she got from everyone in the café.

Though she’s currently enjoying France’s very civilized maternity leave, Jenni is a pastry chef at Noglu. Noglu was at the leading edge of the gluten-free movement in Paris. We stopped by the Noglu bakery to see where she works. They had copies of the cookbook she co-wrote, now also available in English. If you’re interested, you can get a copy here.
Both Noglu and Le Valentin are located in “passages,” which are basically enclosed shopping malls built in the 18th and 19th centuries. In their day, they provided a respite from external weather (and other sanitation) conditions and a place for predecessors of ladies-who-lunch to walk without spoiling their fancy gowns. Nowadays, the passages are popular tourist destinations. We walked through the rest of Noglu’s passage (des Panoramas) with Jenni before parting ways and heading on to a bit more shopping.
I admit I was glad to have a dinner of mostly leftovers along with steamed small purple artichokes (yum!) and, of course, a fresh baguette from our new favorite boulangerie near the Metro station.

Saturday was another slow start. We were torn between seeing the Garry Winogrand show at the Jeu de Paume or doing some shopping. Given our lack of warm clothing, we decided to start with shopping and see what we felt like from there. The French actually invented department stores, and two of the classics–Galeries Lafayette and Printemps–sit side-by-side on Boulevard Haussmann (named for Georges-Eugene Haussmann, who redesigned Paris in the mid-19th century) near the Opera Garnier. So we started there.
Both stores are large and grand. Both are aimed at a higher-income demographic than the one we occupy. “Rick” says that Printemps is the more down-market of the two, but we did not agree with this assessment. Overall, we liked Galeries Lafayette in terms of the beauty and user-friendliness of the store. However, Printemps definitely wins the holiday window competition. Their windows feature city scenes sponsored by Burberry, complete with cute bears. GL is using a monster theme for the holidays, which we found far less cute and even a little creepy–especially when we saw some life-sized monster characters come up the escalator (with their own security detail). We did our real shopping at the nearby C&A, then returned to the cafeteria at Galeries Lafayette for lunch. I recommend the salad bar and the wine dispensers. 🙂
Cute Burberry bear and London scene window 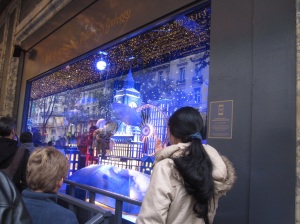 After lunch, we were not yet spent, so we decided to see about the Garry Winogrand. We strolled over to the Jeu de Paume (in the Jardin Tuileries), but found a substantial and barely-moving line to get in. We decided that we would probably enjoy the art more on a less crowded day and opted for a walk through the garden instead.
At least the stormy weather provides really nice light for photos…

The rest of the day was spent blogging and resting in our tiny flat, mostly to avoid the rain.