(Not quite) The Happiest Place on Earth

So, after many rainy days in Paris and plenty of museums, churches, and palaces on this trip, we decided to do something different and venture out to Disneyland Paris. We had already obtained our tickets from the Champs-Élysées Disney Store, since (a) we had no way to print tickets and (b) the official Disney site would not allow us to buy tickets at the best prices with an American credit card. Apparently few enough Americans visit that they don’t bother differentiating the high/low volume day prices on the version of the site that we can use. Since the difference was about €20 per ticket (and there was the printer issue anyway), it was worth pursuing the workaround.
Both Disney and Gray Line both offer admission plus bus transportation packages for Disneyland, but they add about €30 to the cost of admission. If you have luggage, strollers, or mobility issues, this is probably a reasonable approach, since the Paris Metro is not very accessible. However, as we were traveling unencumbered, it was only €15 (return) each to use the Metro and RER trains. We bought tickets from the machines at our nearest Metro station that worked on both kinds of trains. We purchased all our tickets (Paris tickets are sold “per journey”) as we left in the morning to avoid standing in line for ticket machines after the park closed. The RER train was pretty crowded, as it is heavily used by commuters from and going to the suburbs. We did secure seats, however. The weather was mostly as expected (wet and chilly) with the added feature of fog. As I told Maureen though, I actually like marginal weather days for Disney, since they deter some visitors.
Perfect Disney weather

We arrived at the parks around 9:30 am. We knew that Disneyland Park had Extra Magic Hours for hotel guests from 8-10, so we had already planned to start with Walt Disney Studios Park. (Shout out to dlpguide for advance planning info!) We went through the park complex security, then headed towards the Studios and found the WCs. We were a little surprised to be allowed into the park at 9:40 and even more surprised to find no barriers/ropes between us and the rest of the park.

So we headed, as planned, to Ratatouille: L’Aventure Totalement Toquée de Rémy (Ratatouille: Remy’s Totally Zany Adventure). We acquired Fastpasses so we could go a second time if we wanted, then got in line to ride. It’s a 3-D dark ride in trackless ratmobiles. It was somewhat interesting, but mostly disappointing. I have seen the movie and still didn’t follow the story within the ride (and not due to language difficulties, as there was very little language at all). It was cute to see the oversize kitchen items, as riders as “shrunk to rat size,” but I’m not sure I like the idea of 3-D and “ride” together.
We ended up tossing the Fastpasses since we didn’t want to go again and there were no likely nearby candidates to take just 2 passes. The next thing we wanted to see was 20 minutes later, so we decided to get a coffee. We’re not sure what they did, but the Cafe au lait did not even taste like coffee. Advice: don’t get “coffee” within the park. So far, not super impressed.
Next came the Animagique show. The pre-show lights and sounds were quite annoying, so we were braced for the worst. The show was not what we expected–we imagined clips of Disney animation–but it was OK. They used costumed performers representing some of the animated characters with black-light techniques and dancing and singing. Clearly, this was designed for the under-5 set.
The next agenda item was the other major show in this park–Cinemagique. This was actually quite entertaining. Martin Short and Julie Delpy play the leads in a romantic romp through time and space in the movies. Lots of scenes from classic movies and fun use of splicing. Maybe things are looking up.

Before leaving for Disneyland Park, we took in the Studio Tram Tour. Jeremy Irons did the English narration of this pleasant ride, which is similar to its counterparts at other parks. 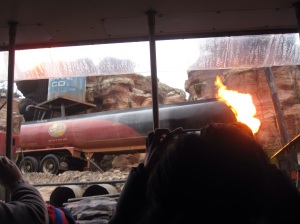 We were already hungry at this point, but nothing was open in the Studios park other than burger places. My advance research told me that Hakuna Matata in Disneyland Park was the best match for our eating preferences. Only one problem; it was closed. The only nearby non-burger option was a place that offered pasta and pizza. The food was adequate, if expensive. It was accompanied by African drummers, who were fun but loud. So far, the drummers, who were encouraging audience members to drum with them, were the best attraction of the day. Advice: bring your own food–especially if you visit in winter. 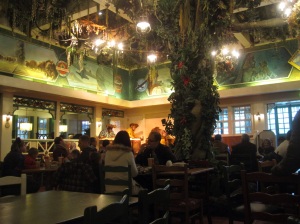 Pirates of the Caribbean was next–more similar to the California version than the Florida version, then another old friend, Peter Pan.
Le pays des contes de fées (The land of fairy tales) is unique to Disneyland Paris. It’s a slow boat ride through beautifully-landscaped scenes from classic (French and familiar) fairy tales.
It’s a Small World was decked in its holiday finery and using the Christmas carol soundtrack, and was as enjoyable as always. We took the opportunity to ride both Blanche-Neige et les Sept Nains (Snow White and the Seven Dwarfs), which was a bit too scary for the little girl behind us in the ride vehicle, and Les Voyages de Pinocchio, which was cheerful and had some nice touches.
As we left Fantasyland and Disneyland Park (for the moment), we stopped to see La Tanière du Dragon (The Lair of the Dragon) on the way out. This huge audio animatronic dragon represents the creature that Maleficent turned herself into in Sleeping Beauty. It is pretty spectacular and unique to Disneyland Paris.

We returned to Walt Disney Studios Park because we had missed the Art of Disney Animation attraction earlier. It was interesting, giving us the animation clips we missed earlier in its first theatre and a short history of the character Mushu from Mulan in the second. Although headphones were available to provide audio in the 2nd theatre in several languages (very loudly), there was not much explanation of the actual process of animation (sadly). The “after show” for this attraction had some fun features–a drawing class (we didn’t participate), some interactive stations aimed at kids, and a place to trace a series of drawings that could then be spun in a circular viewer (zoetrope) to see the subject “move” (we did try this).
We felt as if we had seen enough of the Studios park (both of these parks are much smaller than their cousins in California and Florida), so we headed out to Disney Village to find some food.
Disney food is always overpriced and this was no exception, just slightly worse. We finally decided to settle for soup and sandwiches at the Earl of Sandwich. Actually associated with the family of the Earl of Sandwich, they have pretty decent sandwiches and their prices were half what we would have paid anywhere else in the Village.
Fueled, we returned to Disneyland Park for a few more attractions. The walk-through Les Mystères du Nautilus (The Mysteries of the Nautilus) seemed kind of pointless.
Phantom Manor was not as good as the US versions (especially when they are decorated, which this one was not) and made me wonder about Walt’s fascination with the macabre. Our last attraction was another walk-through, Le Passage Enchanté d’Aladdin (The Enchanted Passage of Aladdin), which consisted of models of scenes from the story (nicely done).

We settled in to wait for the final event of the evening–Disney Dreams! of Christmas. While waiting, we were reminded that we were in Europe, as it was impossible to avoid being near someone who was smoking, despite the nominal restriction of this activity to certain areas of the park. This show was easily the best attraction of the day. It’s hard to describe, as it involves fireworks, dancing fountains, music, lights and images projected onto the castle, and storytelling (in the case, primarily from Frozen). It was great.

We joined the exiting crowds, found our train, and had a relatively uneventful ride back to Paris. Even after this full day, it was still pretty early when we got back to the flat, so we drank wine and packed bags for our return to England.
I don’t know that I need to visit Disneyland Paris again, but I am glad to have had the opportunity to see a different side of Disney parks.

One thought on “(Not quite) The Happiest Place on Earth”