Off to Orlando, plus Tarpon Springs

We had kind of a mellow morning on Thursday, and then there was suddenly a decision to go to Tarpon Springs for lunch. The initial destination was a place called Zante’s, but sadly it appeared to be closed for some reason even though it was past the scheduled opening time for the day.
On our way back to the car, Angie’s dad noticed this sign.

We were not sure what to do about lunch now, since hearts had been set on Zante’s. We had heard that Tarpon Springs is a Greek town, and as we discussed what to do instead and Doris laid out some options, Angie said that she would always eat Greek food. Doris then suggested we go to a place called Mr. Souvlaki, which is a favorite of her daughter Katie. It was pretty busy even though it wasn’t yet noon, so that was a good sign.
The service was brisk but friendly and the food extremely good. Angie and her father shared a giant Greek salad, I had a gyro, and Doris had her favorite, and the restaurant’s specialty, Greek chow mein. We also enjoyed the mural on the wall, which Angie and I instantly recognized as the caldera at Santorini.

After lunch we popped down to the sponge docks to check out the tourist area, which is still home to a small sponge industry. It was very cute but mainly shopping, which is of limited interest on the whole but there were some interesting stops there, including a fun candy store with lots of licorice from around the world. 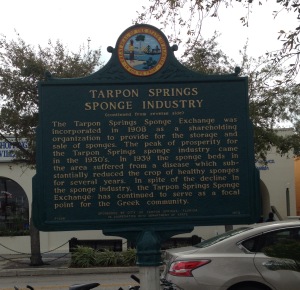 Once we got back to the house, Angie and I quickly got an overnight bag together and headed out towards Orlando, where we were planning on spending the night before doing a quick one-day tour of Universal Studios.
The drive to Orlando took about two hours in crazy Florida traffic. We checked into the hotel, Cabana Bay and schlepped up to our room. Angie and I were not thrilled that the room was close to the mezzanine, so we could hear the sounds of the bar. Once we saw that the bathroom was accessible and the shower was not so awesome, we decided to see if we could get a different room. I called down and asked, trying to be as polite as possible. The person I spoke to was quite lovely and told me he would upgrade us, which was more than we expected. We had to take our stuff to the lobby to exchange the keys, but it was on the way to the new room, which was in a different building.
The room was quite lovely, designed in a retro style, and was actually set up in the style of a suite. One feature we thought was kind of funny I didn’t notice until I muted the living room television later in the evening: when one turns on one tv, the other one goes on too, and to the same station. 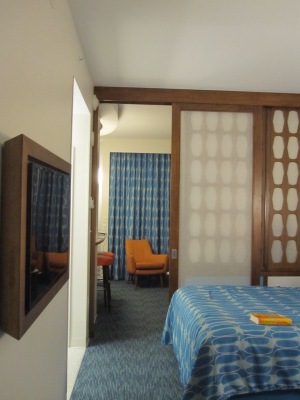 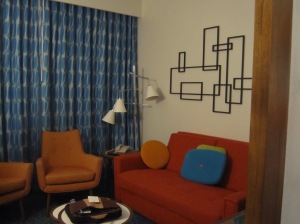 Once we’d settled in the room, we walked over to the city walk to find dinner. There are several known chains, including Jimmy Buffet’s Margaritaville and the Hard Rock, but we settled on a slightly novel concept place called Cowfish, a combined burger and sushi joint because it was not something we’d seen before. The service and food were both great. Angie opted for a bento box that combined the burger and sushi parts, and I had nigiri and rolls.
After our delicious dinner we decided to take the shuttle back to our hotel and get a decent night’s rest since we wanted to be at the park in the morning in time for the Early Park Admission, for which we were eligible since we were staying at one of the resort hotels.