We’re rather behind, partly because of internet connection challenges. We had a busy few days before our departure for the Keys, including some more cycling and some culture, and preparation for our departure to Key West.
On Saturday, Angie, her father, Rebbe and I went for another bike ride, and this time I also pulled the trailer that I will be using on the camping portion of the trip. We rode north on the Pinellas Trail to Tarpon Springs and a bit beyond, stopping along the way at a dog park to give Rebbe a bit of a run. We met another Havanese but I think it was a bit tiring for him to interact with so many dogs. 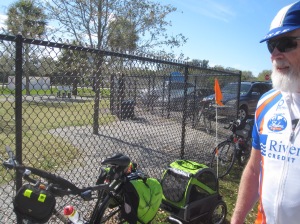 After we rode part of the way back we stopped for lunch at the Tarpon Tavern, selected in part because we could have Rebbe under the table with us on the edge of the patio. We enjoyed it a lot, Henry and I sharing a pastrami sandwich and a corned beef sandwich (the former was quite disappointing, but the corned beef was good, though if we had known they were offering a special that day of duck wings, at least one of us would have ordered them–me, and maybe Angie too). Our waitress said if we came back on a day she was working she could get them for us even if it wasn’t on special that day, but unfortunately we didn’t have time to go back there. Saturday’s ride was about 20 miles.

The late afternoon and evening were devoted to family time. Bill and Doris’ son Bill came over with his wife and daughter, and his mother-in-law came too. Doris made a delicious dinner of baked fried chicken and then we watched The Princess Bride together. I had just finished the Cary Elwes book about the making of the movie, so had a yen to see it again and Henry (Angie’s dad) was also interested in seeing it again. I think everyone enjoyed it and it was a fun thing to do together. I think this part of the day was also tiring for Rebbe though because he was getting so much love from everyone and loving them back but he spent the whole evening wandering from person to person for cuddles and petting.
On Sunday, Angie, Henry and I biked again, this time without Rebbe, who had gone for a haircut. We took the trailers off and rode to Clearwater Beach. It was a good ride, with the additional challenge of a ride over a bridge not unlike some of the bridges we will be riding over on the Keys, the Clearwater Memorial Causeway. Actually it was supposedly only 60 feet of elevation but it was kind of steep. 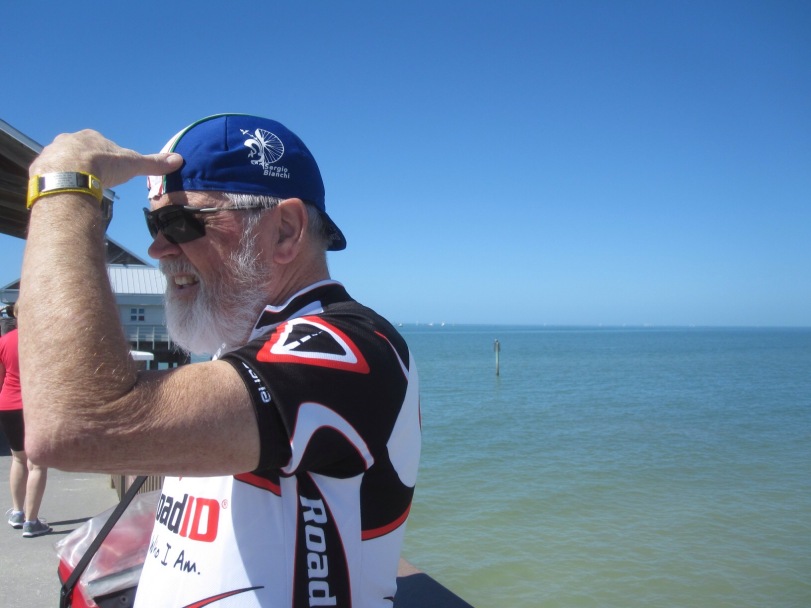 The traffic on the roadway was bumper-to-bumper but fortunately there is a dedicated bike route that was completely separate. Henry had not known it was there previously and last time he had been there had ridden on the road. Fortunately that had been a Tuesday so much less busy for him!
On Sunday evening we had what was for me the most enjoyable meal out since we got to Florida. We went to a deli-style restaurant called the Lucky Dill. The place was super busy so we had a wait of about 15 minutes but it was worth it. The portions were large and tasty. My salad was the only dish that didn’t provide enough for two meals and it was so tasty I didn’t mind. Bill ordered a Waldorf salad, Henry had a corned beef sandwich (verdict: not as good as the Tarpon Tavern), Angie had the Santorini salad (effectively a Greek salad with shrimp I think), I had the Thai beef salad, and Doris had to go with her second choice of an open-face turkey sandwich after finding out that her first choice of ribs was no longer available. This brought up the only minus of the evening: the server neglected to bring a menu when he came back to tell her there were no more ribs. But everyone loved their food and we enjoyed the atmosphere. And everyone but me had left overs for the next day from the restaurant (there were other leftovers available for my lunch however).
On Monday, we were mainly scheduled to pack for the next stages of our adventure, pick up a rental van, and load vehicles. The weather forecast looked less than ideal and it started raining mid-morning. I also thought it might be a good idea to go and see the Monet to Matisse: On the French Coast show at the Museum of Fine Arts with Doris. She had pointed this out from the Friday paper and had expressed interest in seeing it.
The show was in St. Petersburg, a half hour or so from the house. I suggested to Doris that we go and she was up for it. Angie and her dad were not so keen on seeing it, plus they needed to pick up the rental van, so Doris and I set off after lunch. To be frank, if I’d known how awful the rain was going to get, I may not have suggested going, but we made our way safely to the gallery and went in to see the show.
There were some great pieces in the show. We both particularly liked a couple of the Pierre-August Renoir pieces, especially the pieces called “Vineyard at Cagnes” and “Figures on the Beach 1890.” We also liked a lot of the pieces by Jean Dufy.
Vineyard at Cagnes: 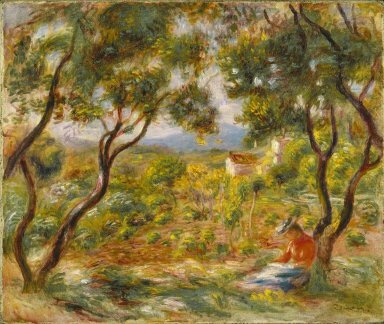 Once we had enjoyed the main exhibit for which we had come, I suggested that Doris show me some of the pieces she likes from the permanent collection. There were several eye-catching pieces, some of which Doris didn’t even remember noticing before. One of the coolest pieces was a captivating work by two guys who call themselves Generic Art Solutions. The piece we liked was on this page and is called “Caesar and Caligula.”
We then trudged our way back through the rain to the house. Angie and her dad were still out picking up the van but Bill was home from his long day off waiting to see if he was going to be called to serve on a jury. Usually he’s excused pretty early because he used to be a firefighter, but because this would have been a civil trial, he wasn’t excused right away. But he still had to call to see if he needed to go back the next day for selection. He was pretty wiped out though. Therefore when Angie and Henry got back, Bill opted not to join us for dinner. The rest of us went back to Molly Goodhead’s. Angie and I both wanted to sample the grouper this time and it was pretty good. Meanwhile, Bill had called in and found out that he didn’t need to report the next day.
We only had a few more things to load, since Angie and her dad had already done some of the big stuff and we loaded the bikes in the van as soon as they got back. (We rented a 12-seater van because we knew that was our best option for carrying the three bikea and all three of us in comfort).
We tried to go to bed relatively early so we could get up and hit the road for Key West.