Starting at the Beginning

After a lot of consideration, we decided that the next bike riding destination would be the Atlantic coast. It offers history, architecture, the sea… And hopefully some warm weather during this part of the year.
We toyed with the idea of starting where my tour (as a participant with Adventure Cycling Association) last January ended in Fort Lauderdale, but ultimately decided that Maureen should see the Keys too and that we would thus start at the beginning. While we were in Ohio, my Dad also decided to join us for the Keys portion of the adventure.
So Wednesday morning we headed out from our Key West hotel (after a pretty decent continental breakfast) to the southernmost point in the United States. 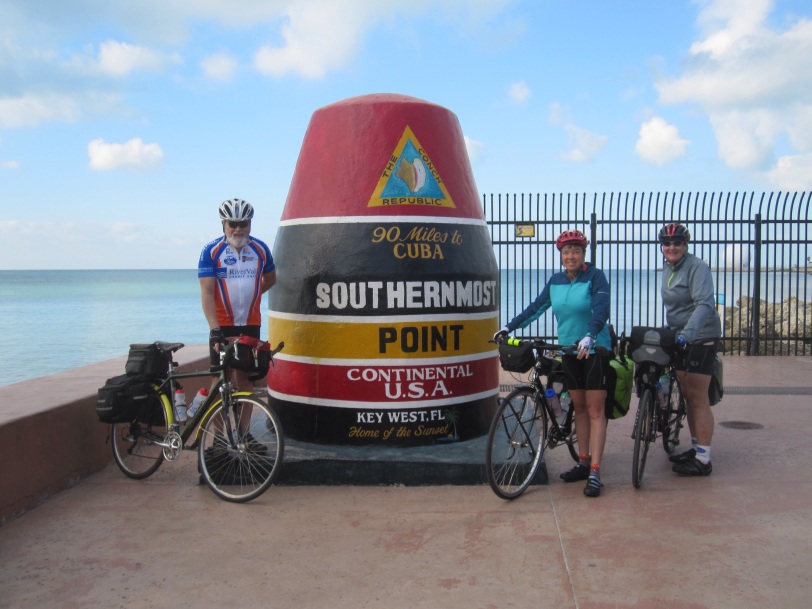 We had cloudy weather in the morning and sunshine in the afternoon. The winds were mostly favorable, with a bit of crosswind in the morning and a slight tailwind for part of the afternoon. The first part of the journey has portions that are bike trail and portions on the shoulder (much like the rest of the Keys route). All of it is part of the Florida Keys Overseas Heritage Trail (FKOHT). There was at least one nice underpass that was not in place as of last year, and several sections have clearly been improved as the trail moves towards completion.

We stopped at Baby’s Coffee Shop near mile marker 15 for a snack. Maureen rated the coffee decent and spot-hitting. A while later we saw the first iguana of the trip.

One of the things we noticed along the way was that many of the old bridges (not on the current road, but on the adjacent one where bike paths and fishing areas are being placed) were built in 1943. One might reasonably conclude that this had something to do with World War II. In fact it does. After the Florida East Coast railway was wiped out by a hurricane in 1935, the railroad right-of-way was used to build a road to Key West, which opened in the late 1930s. During the war, several of the bridges on this road proved inadequate for the needs of the Naval bases in the keys, so funds were provided to rebuild these bridges in a very timely manner. The bridge behind the fence in this photo is one of the 1943 bridges that has not (yet?) been refurbished for biking and fishing. 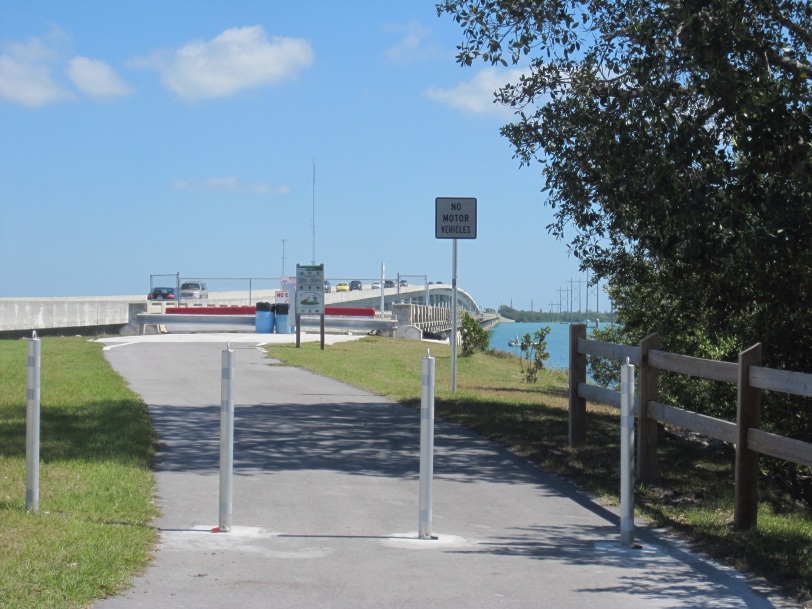 The lodging for this leg was at Big Pine Key Fishing Lodge, one of the places we stopped on the Adventure Cycling tour I took last year. This time, we had a three-room mobile home. Since it also had a full kitchen, we stopped on the way in for provisions. We somehow crammed them into our gear (with the help of our ChicoBag travel packs–we love these things) and made our way to the campground. We were greeted at the mobile home by a Key deer. Sadly, they have grown accustomed to people and come around looking for food.

We did test the Lodge’s pool, and found it to be warm! After a hearty spaghetti dinner, we headed back to the pool for Happy Hour, which included $3 margaritas. Since it was a very popular event, there was no place to sit and we took our drinks and went back to the mobile home. The park also shows movies every night on their cable system, so we whiled away a couple hours with The Quick and the Dead, a 1987 TV Western.
Next up, Maureen’s post on a longer day on the bridges and roads.

One thought on “Starting at the Beginning”