The final day of the ride from Key West to Fort Lauderdale was bittersweet and a bit anti-climatic.

We set off from the hostel after a disappointing breakfast. Angie thought she had seen pictures on the hostel website of pastries as part of the breakfast offering, but all there was on offer was cereal, coffee, and orange juice. At the beginning of the breakfast session, they didn’t even have milk yet, and I think the fruit was slow to appear also. This meant, as we’ve said so many times before, that a stop for a real breakfast would have to take place sooner rather than later. Angie was navigating with the printed maps this day and led us through and out of the Miami area. It was interesting to ride through a wide variety of neighborhoods. The first neighborhood we went through was one of the most affluent, and I joked that one had to wonder what was in the garages of houses that had Bentleys sitting on the street.
Much of our route was along the A1A and did not separate us from the cars very often. After leaving Miami, we passed Haulover Beach and then into a part of the ride that was along busy roads surrounded by massive condo towers, including several that had the name Trump on them. This was the city of Sunny Isles, which was pretty hectic. We stopped there for our real breakfast. The Einstein’s store at which we stopped was pretty busy too, but we managed to get a table outside and get served pretty fast.
We then carried on and after a while we managed to get off the road and onto the beachfront path along Hollywood Beach. It was a lovely day and so we paused along the beachfront, and Angie and I took our shoes and socks off and ventured onto the sand. We also waded in the water a little bit. It felt wonderful. 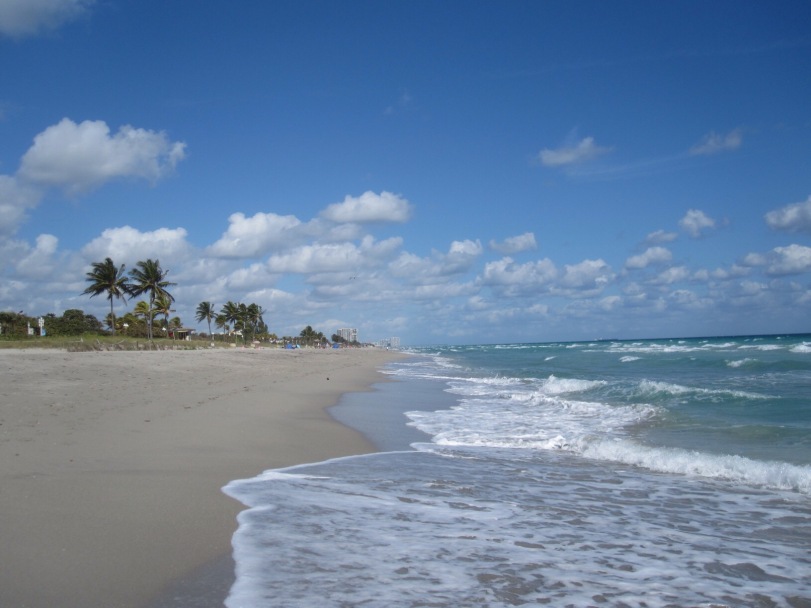 The path took some less interesting turns after that and we found ourselves on roads around the port and airport. It was pretty hot so when we saw what looked like a possible place to eat, a bar called The Keg, we pulled over. 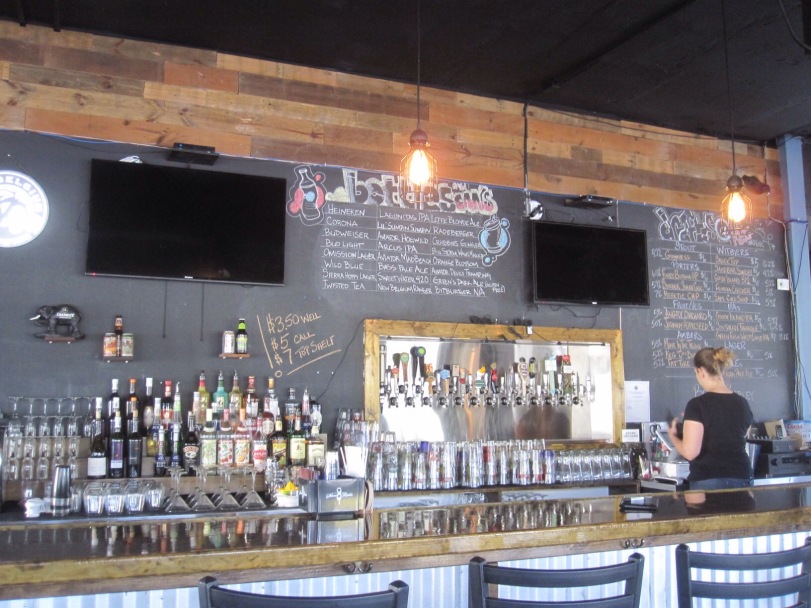 We knew we didn’t have very much further to go, but that there would be wayfinding and would still take a while. The air conditioning was on high, and they had a good, basic menu and free soda refills. Henry ordered a salad and Angie and I shared some wings. They were pretty satisfying and we were able to continue on our way.
We were slowed down by a couple things after lunch. First of all, Angie had an ugly flat tire as we rode into a neighborhood while trying to avoid a main road. As Angie and her father worked on the tire, they discovered that there was a large piece of metal and a big shard of glass embedded in the tire. The tire was pretty beat up, but amazingly the tears had not broken all the way through the tire.
They managed to create a boot on the tire using a patch and some duct tape and it held when we pumped it up so we could go on. Before too long we were back in heavy traffic along the waterfront, actually having to ride with the cars as the road was reduced to one lane each way. I have to say the traffic behind us was very patient and we did our best to get through as quickly as we could.
We then plugged on and next thing we knew, we were in the Lauderdale By The Sea area, with many tourists. Angie quickly identified an ice cream parlor and so we parked our bikes and Angie and her dad went in to use the facilities and order while I watched the bikes. The parlor, named Sloans is apparently notable for several reasons, not least of which is EXCELLENT but expensive ice cream. Angie and I shared a bowl of coffee and chocolate, while Henry sampled the coffee and Almond Joy flavors. One of the other claims to fame is the bathroom door and window. Until you lock the bathroom door, the window appears to be made of clear glass, but once it’s locked, a circuit is completed that causes the glass to appear clouded. As long as you lock the bathroom door properly, no one can see in. This was such a gimmick that the Travel Channel named these loos one of the ten best in the world!
On the last leg of the day we crossed our last bridge of the trip, which also happened to be our first open draw bridge of the journey:

We had less than a mile to go to reach our hotel after this and checked in with no trouble, though it was a drag to find that our room was on the second floor with no elevators, so we had to carry our bikes up the stairs. Of course we did take the panniers off and carry our gear up separately. With that, Henry’s last day touring with us was over, at least for now. We were all a little sad to be done.
Once Angie and I were cleaned up, we were picked up to go to dinner with our friend Danny Rosenberg, who lives in Fort Lauderdale. Henry opted to head out on his own, since he didn’t know Danny. Funnily enough Danny had heard about a Thai/Japanese restaurant close to our hotels that he wanted to check out. It turned out to be so close we could have walked there. It was called TeeJay ThaiSushi.
It was indeed very good, especially the sushi and the tom yum goong soup, which Angie really enjoyed. The food was tasty and it was wonderful to catch up with Danny, whom we had not seen since he moved from Colorado to Florida a few years back.