A Full Day On The Trace

We made it through a chilly and wet night in the tent, which was actually our first night in our Big Agnes, which is really designed for warmer temperatures, but was effective at keeping us dry. We woke up a lot and Angie was a bit chilled, but I think I had just enough clothing on to be comfy. It warmed up fairly quickly while we were making breakfast. Since we had anticipated bike touring, we are carrying only a camp stove and making one-pot meals.Thus, for breakfast, we first boiled water for tea, and then Angie cooked up some very tasty oatmeal. Suitably nourished, we got our one errand of the day taken care of, which was a quick trip to the grocery store in Natchez to get some provisions for lunch and dinner. We already knew some of the basic recipes we wanted to make but needed a few odds and ends to complete the recipes. We backtracked to Natchez because we were still only 8 or so miles into the Trace.

We had actually already discussed modifying our plans a little to avoid, or at least minimize, any further backtracking. Instead of staying two nights at Natchez State Park, we were going to try to spend the night at Rocky Springs, which is just before mile marker 55. The reason for this was that we would then be able to see all the sights up to that point, and then with any luck on Wednesday, get a bike ride in before the weather breaks. Although we had already paid for a second night at Natchez State Park, Rocky Springs is no fee, first-come, first-served. And we we were pretty confident there would be space.

So, camp broken and errands completed, we set back off on the Trace. Our main interest for the day was to see Mount Locust. This is the only remaining stand on the Trace. It’s interesting to me that we are encountering terms I’ve never heard before on this leg of the trip. I had no idea what a trace was before even though I knew the name Natchez Trace, and now I also know that a stand is an inn.

The stand at Mount Locust was run by a married couple and when the husband died, the wife continued to run it. She then married her overseer and they ran it together. Apparently she also had a pretty successful plantation at the site. After some time, the stand converted to a getaway for the gentry of Natchez. We walked around the site, and there was quite a lot to see including the main house. You could look into several rooms here and see how they may have looked when in use. There was also a still-visible slave cemetery, and a family plot, but many of the other stops were merely signs saying what used to be there. 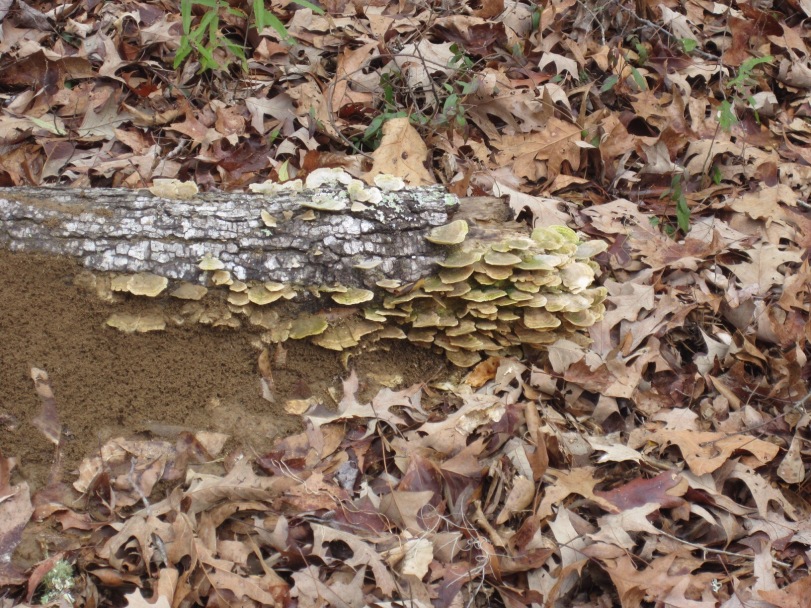 At the family gravesite, we saw the gravestone of the matriarch of the stand, Paulina Ferguson.

At our next stop, we walked for a little bit on what is called Sunken Trace. Basically, much of the original Trace is at a lower level than the parkway today, which closely follows the original route. The main reason for this is that it was built on what is called loess (hey, another new term!) That is very soft topsoil, so the path was worn down by time and thousands of people’s feet. 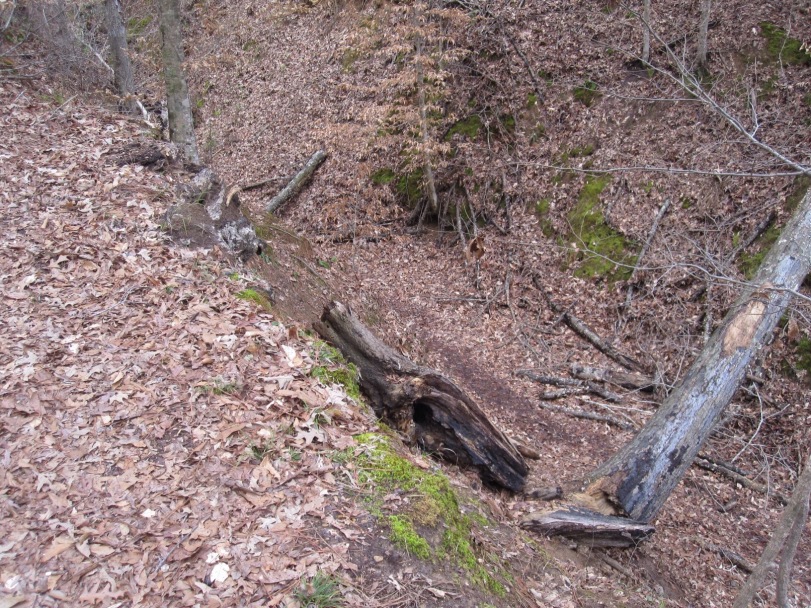 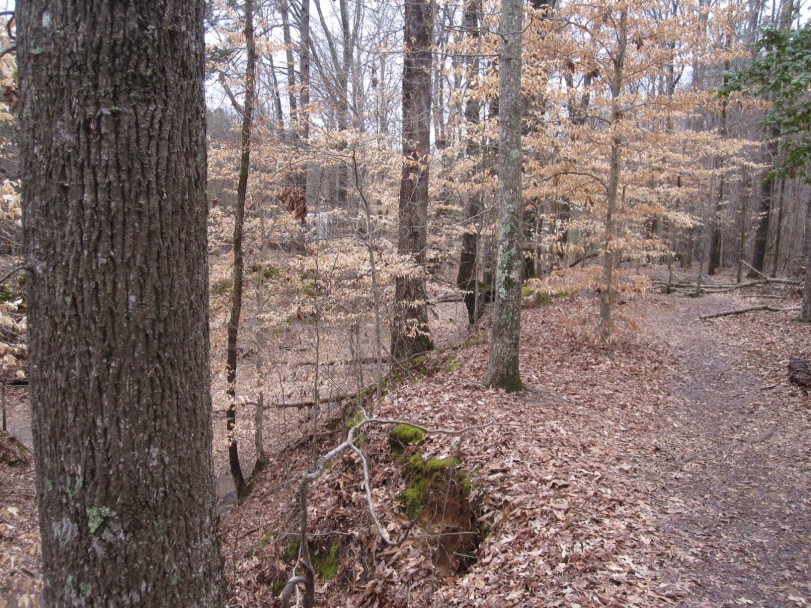 We had a simple picnic lunch at North Fork Coles Creek, which was a nice peaceful setting, though the calm was shattered by what we think was a very large branch breaking off a tree and landing on the ground. I saw some movement but couldn’t tell you exactly what it was. We did notice a lot of teeny wildflowers on the ground there. 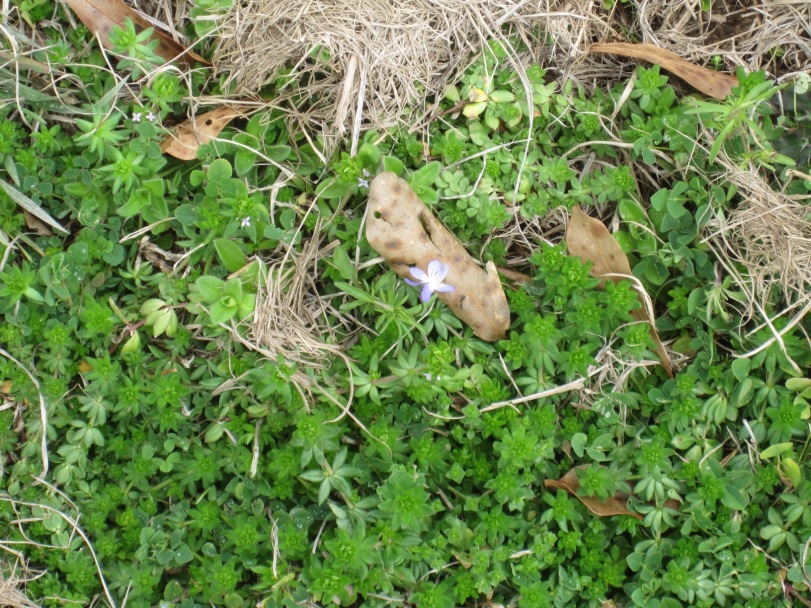 We stopped at a few other points of interest along the way, including Grindstone Ford and Mangum Mound. These were a bit of a disappointment, though Angie got some nice pictures. 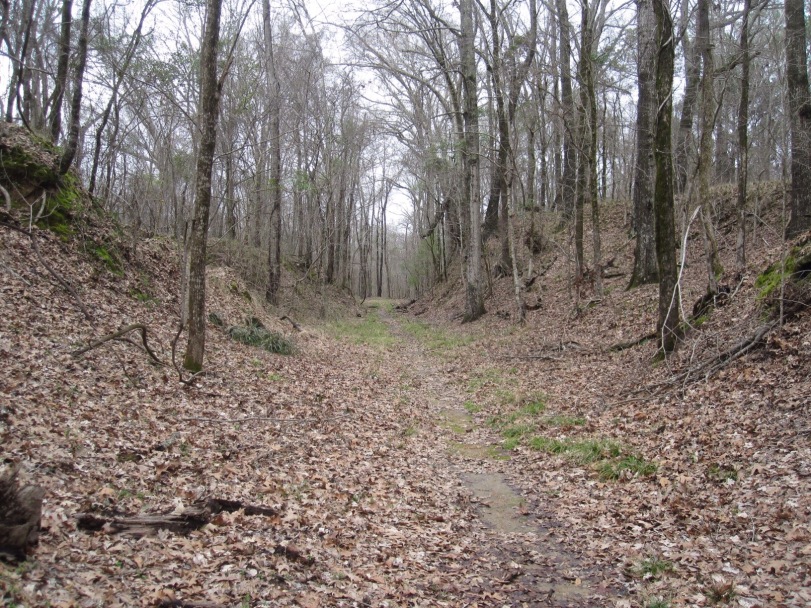 ﻿﻿Although the first part was a nice little walk, there wasn’t actually a ford, and Mangum Mound was even more of a letdown, because none of the promised interpretive signs about the native American presence were in evidence.

We had talked about riding down to Owens Creek Waterfall after we had set up camp, but I pulled in there to let an RV pass us, and we saw that it was closed, which put an end to that plan. It looked like there had been some subsidence, rendering the trail dangerous.

I have been driving at lower than the posted 50 mph speed limit a lot because we want to enjoy the scenery, but of course some people are in more of a hurry than us. We haven’t seen any cyclists but we would slow down for them. Also note, commercial vehicles are banned from the Trace.

So, we moved on to the Rocky Springs Campground, which turned out to have plenty of space for us. We found what looked like it might be level ground at one site and pitched the tent. However, when we walked down to the welcome center, we found that there was one site that may have been less ideal in terms of a perfect spot to pitch the tent, but was better in that the area around the picnic table was covered with pea gravel rather than mud, which was the case at most of the sites. I moved the car, and Angie pretty much picked up the entire tent and moved it two sites over! Fortunately, we hadn’t put the air mattress in the tent yet so it was awkward but manageable. Once we’d rested a little, we decided to drive up and see the old “town” of Rocky Springs before it got dark. There wasn’t a ton to see. A few discarded safes and cisterns, and a church that is apparently still functional, having been built in the 1830s. It was interesting though, because the town had once been home to about 2,600 people. Part of the reason for its demise, according to the signs, was failure to follow conservation ideals in the farming (including cotton), resulting in major erosion. 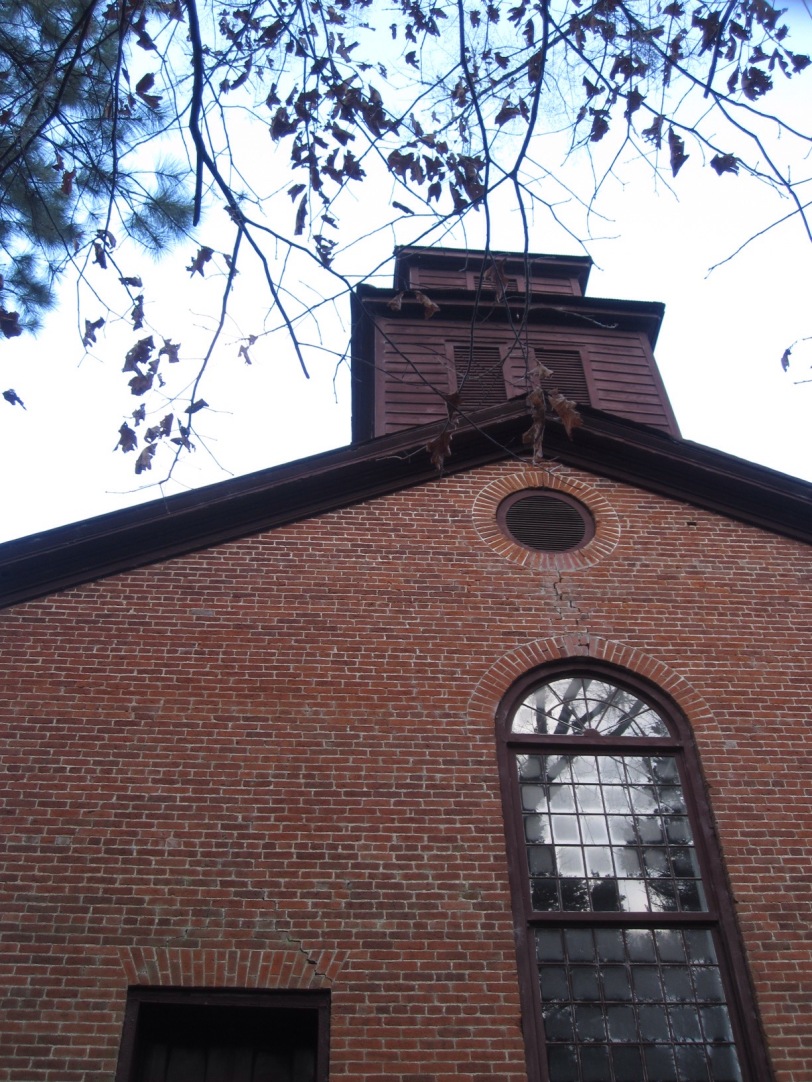 Once we got back to the camp, we made the acquaintance of the campground hosts, who are volunteers who live at the campground for part of the season. From what the wife told me, people spend a month or so fulfilling this function, and get free accommodation at the campground in exchange for a mere 24 hours of volunteering. She said some people just sit around at the entrance and greet people, but that she and her husband actually like to work around the campground, since they are recently retired and want to keep busy. She was so kind, making suggestions about places we could visit, and also warning us about the storm due in on Wednesday night. We told her that this was why we had come to Rocky Springs for Tuesday night instead of Wednesday and Thursday, and that we had a hotel reserved for at least the next two nights!

We had another great one-pot meal for dinner on Tuesday night. I had found a version of the recipe, then Angie found a better one, then we embellished it and in Angie’s talented hands it turned out to be delicious. The basic recipe was pasta with tomatoes and basil, but Angie changed it by sauteing the onion and garlic rather than just putting them into the broth. We couldn’t find fresh basil, so we used dried, and added frozen spinach and canned chicken. What a great meal. And we made enough that we will get a second dinner out of it at the hotel.

One of the challenges of camping with as primitive set up as we have is that our choices after dark (6:30 or so right now) are the tent or the car. Although it was warmer on Tuesday night, we couldn’t sit outside for long, even with our headlamps, because of mosquitoes, which love me so much. So for a while, we sat in the car and worked on our blogs before braving the dark and night noises to brush our teeth and get ready for “bed.” We then repaired to the tent to read and listen to the sounds of the night before falling asleep. At one point I heard the hoots of two owls in what appeared to be a call and response. The night noises don’t seem to stop but I think a lot of it is birds.