Random California and Colorado–trying to catch up!

Maureen has already written a bit about our plans and explorations in the Santa Barbara area. I wanted to add a few words about the fun things we did during that week and a little about our week at “home” in Colorado. Food experiences: We are never bored when we are sharing meals with Cece. This week was no exception. For convenience and cost reduction, we made most of our meals in, sharing responsibility for shopping and cooking. We did, however, have two interesting meals out. The first was at Clementine’s Steak House in Carpinteria. The decor here is definitely grandma-style, as are the portions. Each meal starts with pickles and vegetables, continues to salad and soup, comes with vegetables and a starch (and main course protein, of course), and ends with pie.

Yes, pie is included! It was good, you just need to forget about any sort of calorie or point tracking when you eat here. I had fried chicken, which we ate for several days. I think Maureen’s rhubarb pie may have been the best of the pies we chose–from a list of at least a dozen!

Our other food adventure was to Mesa Verde restaurant in Santa Barbara. I’ll admit to being a little skeptical about the vegetarian concept of this place, but the food was pretty good. The decor here was clean and “organic,” but we think the hard chairs could use some cushions. We debated about share plates for a long time, but ultimately went right to mains. The menu could use a little more explanation–we weren’t really sure how the ingredients went together. This night, Cece made the best choice with the smoked pulled mushroom dish, which was essentially an awesome sandwich. A highlight of the evening was some free orange-beet-lemon juice brought to us by someone who may have been the owner. It was tasty!

We forewent dessert at Mesa Verde (they were predictably weird) in favor of ice cream. We drove by the Santa Barbara institution–McConnell’s–but deemed it too crowded. Thus, we ended up at Rori’s Artisanal Creamery in Montecito. Instead of cones, we opted for honey hot fudge topping. Yum!!

Rides: We were able to ride our bikes twice during our stay in Carpinteria. Each time we started from our storage unit at the south edge of town. One time we went north and once south. Our route map did not extend south of Santa Barbara, so we had acquired a local bike map. However, even this didn’t really acknowledge the presence of the new bike route along the 101. We saw one pair of bicycle tourists who were clearly confused at this point. Hopefully new maps will be available soon. Rebbe still doesn’t love riding in the trailer.

LAX: Avoid if possible. It seems like it’s always under construction, but the food options never improve. If you have to go (or choose to, because the fares are so cheap, as we did), take your own food!

Colorado: We went to Colorado for the wedding of two dear friends. The wedding was beautiful and it was fun to see many of our friends. Here is a picture of the cake.

While we were in Colorado, we were able to ride with Out Spokin’, the bike club we have been active in for several years. The ride was mostly flat, but challenging due to wind on the way back, and we were able to see both the men’s and women’s US Pro Cycling Challenge races come by (this was the day’s objective). 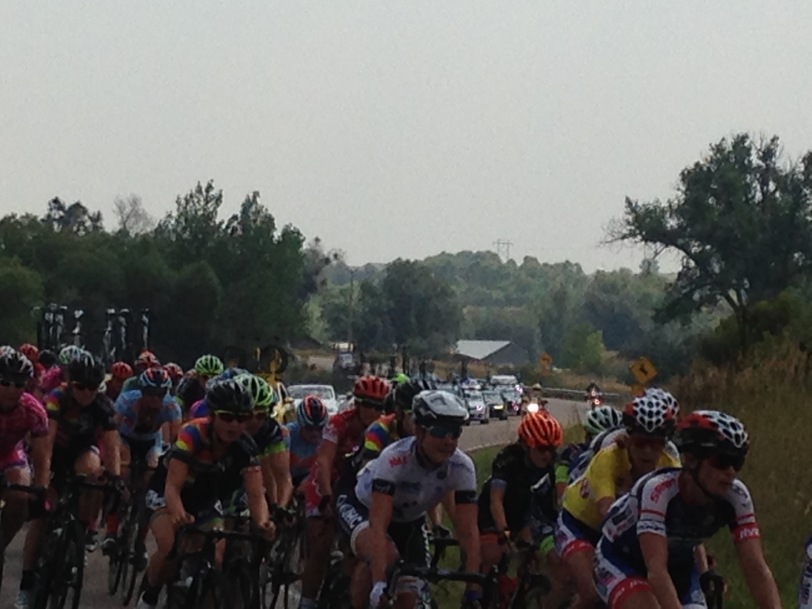 Happily, we were also able to visit with many friends and family members during our short stay. And we spent very little time at the storage unit!
Next up–back to California.

One thought on “Random California and Colorado–trying to catch up!”