A Day at the Zoo

There are tremendous benefits to riding with the Cruising Pueblo group that meets at Bingo Burger every Thursday night for a bike ride and dinner. The greatest benefit has been the wonderful people we’ve met on the rides, but there are some side benefits, like an automatic discount on our dinners at the restaurant, and the discount tickets we received for the Pueblo Zoo after one of the weekly rides went out to the zoo and back. The deal gave us two dollars off per person, and a free Gatorade at the Safari Café (fruit punch is probably one of my least favorite flavors, but an ice-filled glass of something to drink was more than welcome to bring down my body temperature after walking around for a couple of hours in the 95-degree heat).

Angie and I have been so busy with work, trying to find a property (more news soon we hope), and some travel, so it was only last weekend that we felt for the first time that we may be able to squeeze in a trip to the zoo. We decided to bike over on our single speeds, despite the ridiculously hot weather that just doesn’t seem to want to break in Pueblo. Temperatures are in the mid to high 90s every day, even with daily rain storms that temporarily cool things down and remind people of the good old days in Colorado just a tiny bit, when it rained every afternoon during the summer.

It took us about 35 minutes to ride to the zoo via the bike path, though I admit I walked my single speed up the short, wicked incline that is known as the Park Slide before riding into the zoo, which is in Pueblo City Park. We were thrilled to find a small but well-designed bike rack right by the entrance that enabled us to easily lock our bikes together.

I’m not really a big captive animals person, though I know the model for zoological gardens has changed greatly in the past few decades to focus more on education and conservation of important animal species. And while it’s not an epic zoo on the scale of a major city, the zoo did have some fascinating offerings.

The animals we most enjoyed seeing, I think, were the following:

Maned Wolf (actually not a wolf or a fox, but has a genus all to itself in which it is the only species)

Red Pandas. There are two pairs that are housed separately. This is because one pair is overweight so they cannot free feed like the other two! We learned this from one of the zookeepers (is that what they call them anymore?).

North American River otters: we had to come back to this enclosure since they were not out when we first arrived at the zoo. From what we could tell there was a mother and two babies that she is teaching to swim (they seem to have the hang of it). The father apparently died recently.

Szechuan Takin: I had never heard of this creature before and I can’t tell you to what it can be likened, though I thought a little of Javelinas. They are highly esteemed in China and Tibet but that doesn’t seem to deter the poachers and the destroyers of their habitat, which makes them a vulnerable species. 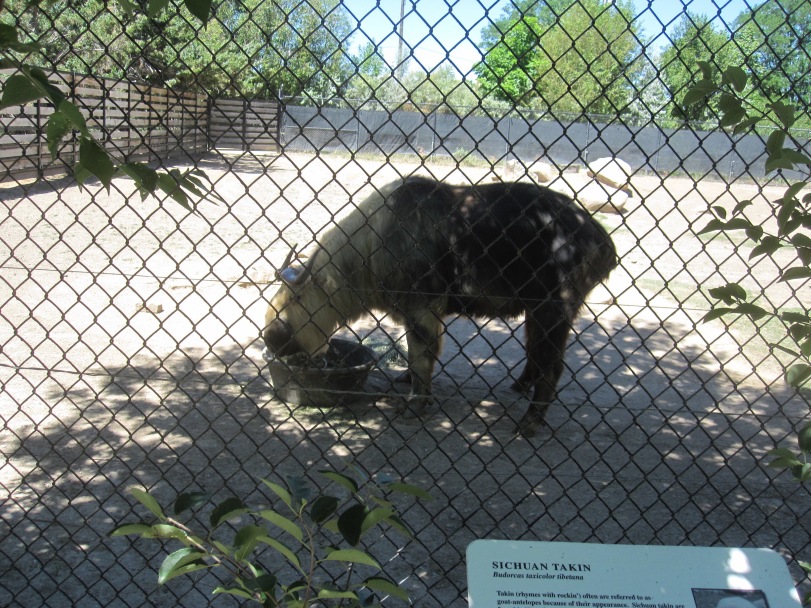 Pallas cat: these are way cool, clearly cats. There is a pair that the zoo is hoping will breed but they are concerned that the female has reproductive issues. This was learned from one of the zookeepers. It was great to be around a couple of the cages when the zookeepers were there and answering questions.

I mustn’t forget the bald and golden eagles, which were resident in the bear pits that had been built as part of a Works Progress Administration (WPA) program. We couldn’t tell what keeps them there, unless they were wounded at some point, like the raptors at the raptor center a mile or so up the road.

In fact, I should also mention that the zoo has a bunch of WPA/CCC structures, including the World of Color Building that houses some of the zoo’s reptiles. Since the zoo opened in 1934, it kind of makes sense that some of its structures were the result of this program, which is one of FDR’s greatest legacies and something that (to put in my two-cents) could totally bear repeating for our society (though such a program may not reach the heights of the design and architecture brought forth in the 1930s).

Other creatures of which I had never heard before: Rock Hyrax and Chuckwalla.

We also saw some of the creatures one expects to see in a zoo: monkeys and apes, ring-tailed lemurs, a family of lions (a cub was born earlier this year), a pair of zebras (Grevys Zebras), macaws and cockatoos, a few penguins (Black Footed African Penguins to be exact), peafowl (the male was not showing off while we were there) and lots of snakes and lizards.

Our biggest disappointments were that the rain forest exhibit is closed indefinitely and even more, that the African Painted Dogs were not viewable on our visit because they were having their teeth cleaned! This was one of the exhibits about which I’d been most excited, so I was a bit bummed, not to mention confused as to why such a task would take place on a Saturday. We were also heartbroken to hear that one of the dogs died during the procedure on Saturday.

After finishing our circuit of the zoo (including a cheap but not terribly satisfying snack at the Safari Café, from whence our free Gatorade was procured) we did a quick scope out of the gift shop (always a must, though we hardly ever buy anything).

We decided that we would ride home on the roads, since the one-way system in the park made it quite easy to get on the straightforward route home, and would also take us past Hopscotch Bakery, about which we had heard much but had yet to visit. It is owned by the same people who own Bingo Burger, and again, this was a place we just had not seemed to be able to get to even though we’ve been in Pueblo for almost 6 months. Unfortunately, they close at 4 most days and are closed on Sundays so that had limited our opportunities a little. Therefore, since it was the middle of the day on a Saturday, we figured it was a perfect opportunity to stop in.

There were so many things to choose from, it took us each a while to decide what we wanted. Did we want ice cream (not sure of the provenance but hope to find out in time), a raspberry croissant, a sandwich, or a cake or cookie? It was pretty hard. I decided on a cookie with a raspberry topping (though I nearly caved to the shortbread) and Angie had a chocolate-covered peanut-butter rice krispie treat. They were delicious.

We also had a lovely conversation with the owner, Mary Oreskovich, who had offered to top up my water after complimenting us on being out on our bikes in the heat. Of course, chatty Cathy here told her all about our dream to open a hostel in town, and typically of the group of Pueblo natives who are all about bringing the town forward, she was very excited to hear about it. I thrive on such feedback: it really energizes me about what we are trying to do.

Suitably fueled for the end of our trip (maybe a mile and a half to go to be home), we went outside to unlock our bikes. I had noticed that my back tire was a bit squishy shortly before we reached the bakery, but was hopeful I could get home on it. But when we came out of the bakery, the tire was flat. We decided that Angie would ride home to get the car, and I would walk down to a spot near the pedal boats on the Riverwalk to wait for her. We picked that spot because we knew there was some shade in which I could wait.

Although it was a disappointing end to our excursion, it was still a great outing as we continue to learn about what Pueblo has to offer residents and visitors.