The Days are Still Packed

Yes, the title is a reference to Calvin and Hobbes. Back in the strip’s heyday, I was in my 20’s and I lived for super-active, packed-day weekends. I was working hard, teaching and/or studying, but I always managed to get my work and my chores done even after a fun-filled weekend. Sometime in the ensuing decades that drive for adventurous weekends got lost. As I was considering this past weekend and the distasteful chores that it had in store (even with an extension, one eventually has to deal with taxes…), I was reminded of the packed-day lifestyle. Surely those chores didn’t actually take very long, but I somehow managed to spend a lot of time worrying about them when I could be playing. Why not play, then tackle the chores in the limited time that was left?

So we started our Saturday by getting up early (sadly, this is one of the costs of adventurous weekends) and pedaling down to the El Pueblo Museum for a yoga class taught by one of the first people we met in Pueblo. It was a good class–just the right amount of stretch for our “no yoga summer” (did I mention Pueblo is super hot in summer) bodies. We visited for a while after class, including a bit of a lament about the undeserved reputation that Pueblo has across the state (while it’s actually quite a nice place to live).

Next up was the Farmer’s Market outside the museum. We walked around to scout the offerings, then stopped for a breakfast bowl at Smokin-D’s barbecue truck. After breakfast, we purchased beets, then tried some roasted chilis (Pueblo chili is actually a “thing,” there’s even a Chili Festival in September) before opting to purchase the “medium” variety. We also acquired a cantaloupe and some Palisade peaches before packing up and getting back on our bikes. We were planning to watch the State Fair parade, and briefly considered going home first. We quickly abandoned that plan when we encountered crowds and traffic along the route. So we backtracked to Solar Roast (we were seriously under caffeinated and there was no coffee available at the Farmer’s Market), locked up the bikes, acquired Americanos, and parked ourselves across the street on a curb under a tree with the slight cushioning of our yoga mats.

We didn’t have to wait long for the parade (new experience #41, by the way–State Fair Parade) to arrive. It was an enjoyable parade, with the usual floats and bands and politicians. Here are some photos:

At some point in the morning, the agenda for the rest of the day came up. I had decided during yoga that I really wanted to go to Great Sand Dunes National Park. It was the National Park Service’s 100th Birthday weekend and all parks were free. Also, Maureen had never been there and it’s only about a two-hour drive from Pueblo. Luckily, Maureen agreed to my plan. So we pedaled home after watching the parade for an hour, lunched on our leftover sandwiches from the day before, and packed up the car (and the dog) for an adventure.

Rebbe was a little confused about the mission, but seemed to enjoy looking out the window. Upon arrival, we did our usual (when Rebbe is with us) tag-team visit to the Visitor’s center, then headed for the dunes. We wandered around for a while on the sand, keeping a careful eye on Rebbe’s reaction to the warm sand. 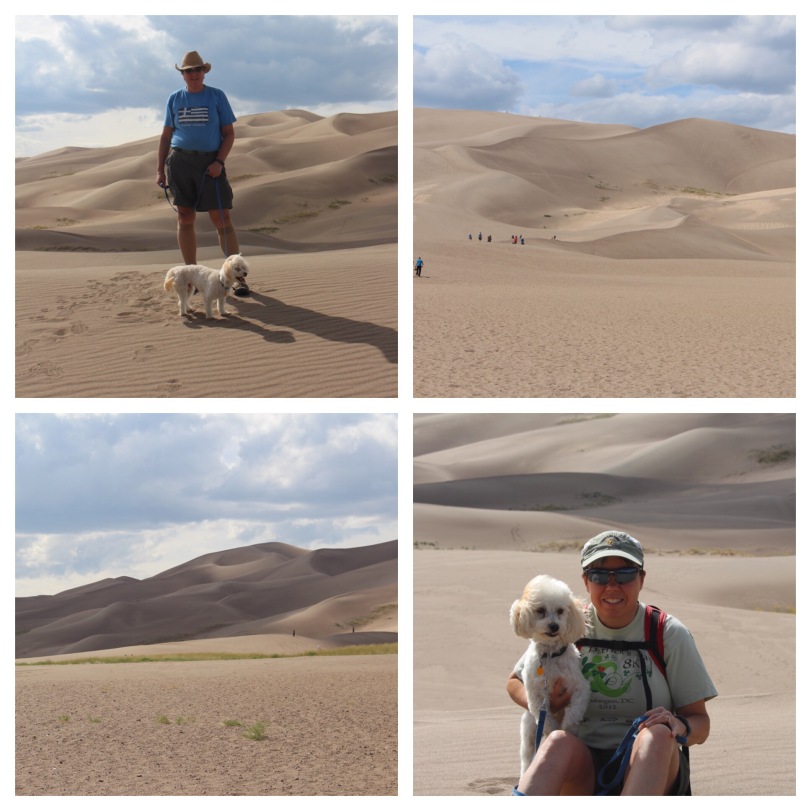 After a bit of hiking we drove to the nearby picnic area. One of the objectives of this adventure was to try out our new camping stove, so we had brought along some Bush’s vegetarian baked beans and a leftover turkey sausage. The grill (a Camp Chef Everest) worked great, though the instructions, which looked complete, actually left a lot to be desired. Some deer came by to visit, too.

After dinner, it started raining. We had already decided not to stay for the celebratory bluegrass concert, since we wanted to bike the next morning, so it was not a big deal to us. We just turned the car towards home and enjoyed the evening drive. All in all, a great, packed day in southern Colorado. Sigh.