After our great but busy day on Wednesday biking in the rain, we treated ourselves to a slow start on Thursday morning. We didn’t rush to get up or ready for our day. It was still raining heavily, so we didn’t see why we shouldn’t pace ourselves.

As we’d been so unimpressed with the buffet breakfast at the hotel the day before, we had saved some of our food from dinner at Miyo’s the previous evening. I had leftover butterfish and rice, and Angie had tofu and rice. We had to eat it cold because there was no microwave in the room, but it was still pretty good. We also had some leftover hard-boiled eggs that we had made and kept cool on the trip from Kona in a soft cooler we had picked up at Costco.

The coffee machine in the room was not so great and we were only given one sachet of coffee a day, though by the time we left we had at least figured how much water to put in the pot.

We did some research to see where we might find a decent cup of coffee to help us on our way on the day’s outing, and discovered what looked like an interesting place called Moonstruck Patisserie, in the downtown area, which is a cute and historic looking built-up area facing Hilo Bay. We stopped there and found that they only offered French press coffee, which we didn’t want this time, but they also had some great looking pastries. We decided to buy pastries there, and go to another place for the coffee, since there were a couple of other coffee shops within walking distance. We then walked down to Hilo Sharks Coffeehouse and ordered some coffee drinks there. We had planned to take them with us but then the rain started coming down in buckets. As a result, we stayed in the café to drink our coffees and then braved the storm to head back to the car.

Once we reached the car, we began our drive up the coast from Hilo. Our main destination for the day was Akaka Falls, which is considered to be the premier waterfall in the islands and is twice the height of the Niagara Falls.

The falls are about 10 miles north of Hilo. You drive mainly up the coast road and then head inland for a few miles to reach the parking lot that marks the entrance to the park. It was pouring with rain when we got there but there was a park attendant by the ticket kiosk, helping people with their payments, since if people were paying with cash, the money was getting soggy and hard to feed into the machine!

The (paved) trail is not that long and not super challenging. We followed the trail in the recommended direction, so first we got to see Kahuna Falls, which the website describes as cascading, while the 422-foot-high Akaka falls, which are pretty mighty (especially in the rain) are described as freefalling. Both falls descend into the Kolekole stream. Despite the torrential rain, the views were quite spectacular. 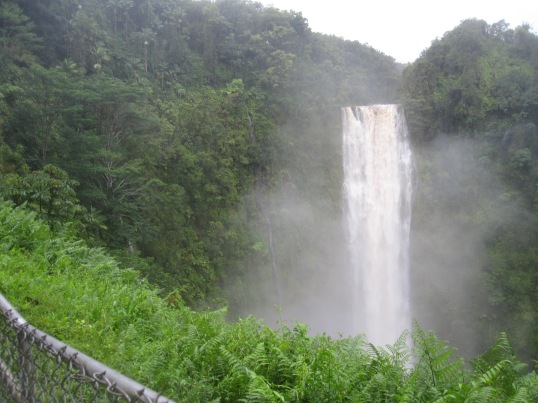 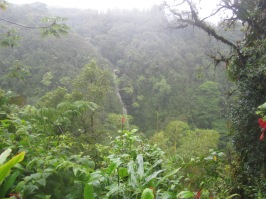 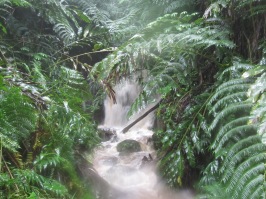 When we left the park (after inhaling our amazing pastries from Moonstruck–will talk more about it on the food blog). we drove a little further up the coast, and mainly just checked out the scenery. We doubled back to have a car picnic at Kolekole Beach Park, which is where the Kolekole stream comes out to the ocean, providing one more waterfall before the stream hits the sea. We walked out toward the water and took a selfie or two before getting back into the car and heading back to town.

We still had some more adventures on the agenda for the day. On our way to our destination for the evening, we stopped at the Mauna Loa Macadamia nut factory. The factory is about three miles off the main road south out of town. You drive through the macadamia orchard, which is quite a spectacular sight to see. Sadly, the “Factory tour” was not very spectacular. Most of the monitors with information were not functioning. The part of the manufacturing that you could see was the final stages of the process, and packaging, which is always less interesting to me than the processing. I feel the same about the Celestial Seasons factory tour in Boulder, Colorado: they let you smell the mint room and show you how the tea is packaged. Not so enthralling. But Mauna Loa has a gift shop and free samples. We tried about four flavors and our favorite was the Kona Coffee Glazed but the prices were not that great compared to buying a multipack at Costco, so we left empty handed (but with a partially full stomach).

Our actual destination for the evening was a return trip to Volcanoes National Park, to see if we could have some better views of the spewing lava in the dark. We had considered a few approaches to doing this, including spending the night at the Volcano House in one of their rather spendy lodge rooms, but decided that happy hour at Uncle Georges, the hotel’s bar, would be adequate. The bar and restaurant at the Volcano House have a nice view of the crater, so we thought that was a good strategy. We assumed that we would have to wait a while for a table and so went into the viewing area, where we caught a beautiful sunset and were able to see snow on the top of Mauna Loa, which is something people often have a hard time believing (that it snows in Hawaii). 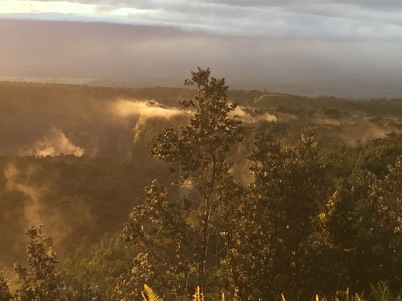 It actually didn’t take too long for our name to be called for a table in the bar. In fact they offered us a place in the (much more expensive) restaurant but we were fine with the bar and the bar menu. We managed to find ourselves at a table by the window so we could watch the rest of the sunset and see as the glow became illuminated from the caldera. We ordered the coconut porter battered fish and chips (after being assured the batter was not super coconutty, since I’m not a fan of coconut, except in Thai curries) and a plate of wings. We can’t remember the preparation for the wings and they’re not on the online menu for the bar, but they were quite tasty.

By the time we finished eating and drinking, the sun had gone down and we could see a pretty strong glow of the lava surging in the caldera. We drove the short distance to the Jaggar Museum, which we had visited on our trips to the park on the two previous days. It was quite chilly but we really wanted to get the view of the spewing lava that could really only be seen from this spot as a result of the limitations on access that are now imposed at the park due to the high concentrations of sulfur dioxide that I mentioned in my previous post. We did have binoculars with us, so we had a good view of the caldera. We were very glad to have the views and to end our evening with the experience of watching the leaping lava through the glasses.

One thought on “Rainy days and Thursdays”