The trouble with vacations is that they end, right? And just as they’re ending, which you’re already not that excited about, you have to do a demanding transition day. From Hawai’i, that transition day is especially long, because nearly all the flights to the U.S. mainland leave late at night. For us, that departure was at 11:30 p.m.

We did quite a bit of packing the night before our departure, but given the weather and my exposure to it the day before (read about it here), we still had some packing to do on the final morning. We had saved some fish and rice from the previous night’s dinner at Miyo’s, so we had a ready “first breakfast” before checking out.

Since we had already driven around the bottom of the island and across much of the Saddle Road (which was also not a good choice this day due to snow (!)), we decided to take a mostly northerly route across the island. But first, we had to stop for pastries and coffee at Moonstruck (read more here). Fortified by caffeine and sugar, we headed up the coast. The first part of the drive revisited some of the Akaka Falls day scenery, then we were in new territory. We enjoyed the coastal views before heading inland towards Waimea. There the surroundings turned pastoral.

We stopped in Waimea to find a bathroom and hopefully a snack. Unfortunately, it was Christmas parade day. The town was packed. After we were foiled (for the third or fourth time on this trip) by a women’s bathroom closed to be cleaned by men, we found facilities in a grocery store and then bolted out of town away from the crowds.

The next part of the drive was also new to us, since we’d reached Waimea by a different route earlier. It took us from farmland, through lava flows and to the beach.

We wanted to check out the petroglyphs at Puako. To access them, you drive through Mauna Lani Resort towards the posh hotels, then park at Holoholokai Beach Park. We hadn’t yet eaten lunch, so we took advantage of the picnic tables there to eat some of the food we had left–bread, cheese, crackers, honey, oranges, ginger limeade–before hitting the trail. We had been in rainy Hilo for several days, so the heat and dryness were a bit surprising, though not unwelcome. 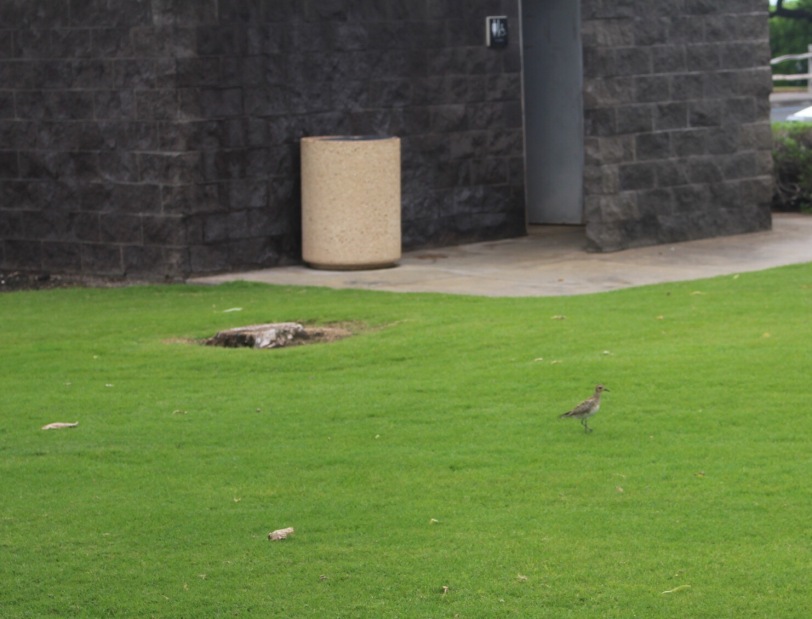 There were some fake (read, recently constructed replica) petroglyphs near the start of the trail.

We had to hike about 3/4 of a mile to see the real petroglyphs. The hike was initially through thick, low-growing trees, but eventually opened up. The petroglyph field was impressive. There is no consensus on what they mean, so modern humans just look, enjoy, and imagine. 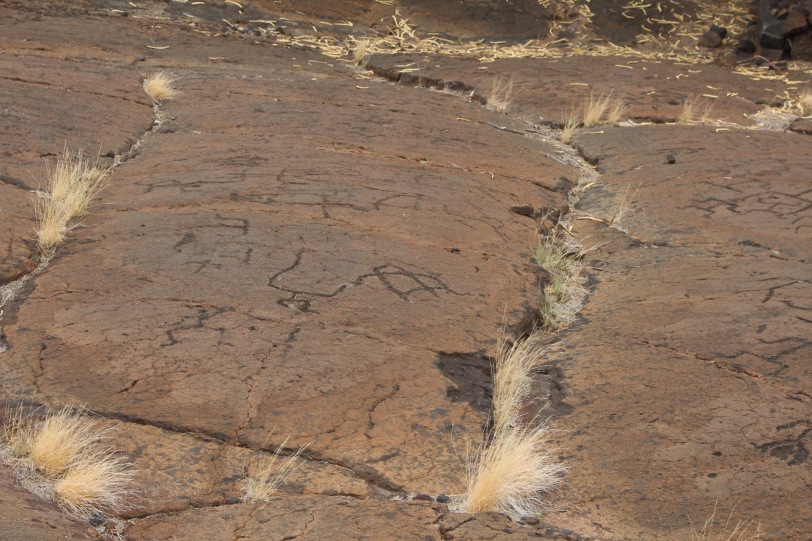 After hiking, we wanted to check out the Waikoloa area, which was another location of Costco Travel-bookable hotels, to see if that was an option for potential future Big Island visits. It is not. There is a Hilton complex that seems to go on forever and two shopping centers (Kings’ Shops and Queens’ Marketplace) that could be anywhere is the U.S. (or many other touristed locations). We had a nice chat with the guy who was running the bike/triathlon shop, but otherwise the visit was not memorable.

We decided to try to hit one more attraction before Costco and dinner. Sadly, Kaloko-Honokohau National Historical Park closes at 4 pm (!) and we did not make it.

We sighed and moved on to Costco for fuel and Hawaiian specialities (that is, macadamia nuts and brittle). We waffled for a while about dinner, drove through the Kailua-Kona tourist area, and ended up at a sports bar in the same shopping center where we had our first breakfast at Bongo Ben’s. It was not memorable, but it was cheap and we could sit outside while watching Big 10 football on the TVs inside. Almost as entertaining was the couple sitting near us, who seemed to find each aspect of their meal unsatisfying. There was also a pretty decent sunset. We sat there as long as we could, then decided to walk back towards the tourist center. We had a pleasant walk and bought a book for my niece. We decided that we did not need to stay in central Kailua-Kona either. Apparently, we chose our Kona-side accommodations well with minimal information (Hilo had only one Costco Travel hotel choice).

It was still early, but we headed for the airport anyway. We dropped our minivan, rode the shuttle, found a place to change into fresher (and warmer) clothing for travel, and checked in. And waited. For what seemed a very long time. In an airport with nothing open, despite the fact that most flights leave quite late. Sigh. Bring a book. Oh, and the airport is basically outside, so there’s no temperature control. Going home–not the fun part of vacation 😦

The flight was my favorite kind–uneventful. We landed in Seattle early in the morning and had a nice breakfast at Anthony’s. It was expensive, but it was the only spot that seemed to have a full, sit-down breakfast.

By the time we finished eating and getting some snacks for the next flight, it was time to board. By this point, we were quite tired. A few hours later, we landed in Denver and collected our bags. Then we waited at least 45 minutes for the shuttle to the Stapleton Renaissance, where we’d left our car. This was definitely the low point of that strategy, but it’s moot, since they won’t be offering the shuttle after February.

We headed home from the Renaissance (yes, still 2+ hours left in this interminable travel day). I always want pho after I travel. Chicken soup will do, but pho is preferred. So we got a recommendation from a friend for beef-optional pho in Colorado Springs and stopped at Pho-nomenal for dinner. It was spot-hitting and quite reasonably-priced.

Vacation was over, but we were home, safe and sound, if a bit tired. On the plus side, we went to bed early and avoided jet lag.