Maureen has some new experiences

This was totally accidental, but over the past few days I had several new experiences!

Since I’m not working, I figured I could spend at least some of my time (in between looking for a new assignment) contributing to our community. Therefore, on Friday, I met up with some other volunteers from the Pueblo Parks department, along with the volunteer coordinator, Nathaniel, to do a little cleanup along the trail that goes from downtown up towards CSU Pueblo.

The original plan was to inventory a homeless camp. I guess the process is that when a homeless encampment is discovered in town, the city posts a warning, to encourage the campers to pack up and leave on their own. If they do not, then the camp contents are inventoried and then dismantled. The tents, sleeping bags and so on are then stored by the parks department, but I didn’t learn if these are claimed very often. I would think they’d be valued possessions.

When we got to the location of the camp, it was determined that the campers had heeded the warning, and had packed up and left. This didn’t mean there was nothing to do however, and for two hours a small group of us (Nathaniel, myself, and three other volunteers) filled trash bags with booze bottles and cans, Slim Jim wrappers, burger boxes, and other trash that we picked up along the trail and the banks of a small stream that drains off from Fountain Creek. One of the gentlemen volunteering said that he’s never seen the trails so clean, so that felt good. We were also complimented by the couple who were running the marathon that was being run in town on the following Sunday. The husband said these are the cleanest trails in Colorado. I’m not sure I agree fully with that, having ridden all over Denver, but it is looking decent and we filled about 10-15 trash bags. 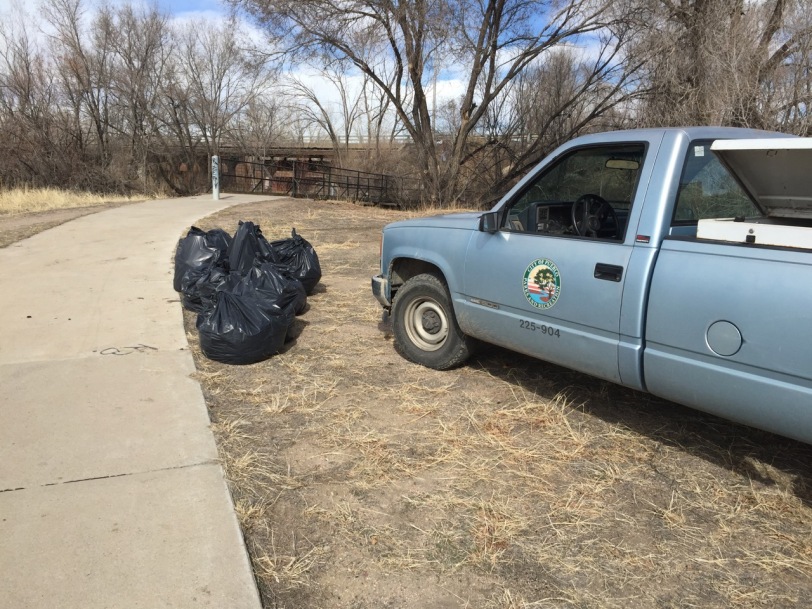 The work was a bit harder than I expected, because I was climbing up the embankments to get to trash, but it was good to be outdoors on a relatively warm February morning and to get my heart rate up. I was also very happy that somehow, I avoided finding any used needles or condoms!

My second new experience of the weekend was to participate in an event presented by the Southern Colorado Runners. I actually went, despite the cool temperatures, because my friend Kim thought there was going to be a woman there who might be useful for me for networking. She wasn’t there but I figured I’d participate anyway. This was a totally new type of experience for me because I don’t actually run. The event, called a Predict, is a run in which runners (and walkers), complete a course (there was a 10k and a 3 miler) after noting their predicted time. Since I was walking, I had no idea what to predict, and since I didn’t start my personal timer until I’d been down the road a bit, I don’t know how long I really took. I actually think the distance was less than three miles, but I can’t say for sure but I think I predicted an hour (approx. 3 mph). However, I actually averaged about 3.6 miles an hour, which is what my Strava told me at the end of the walk. That’s a pretty decent pace for me, and I think I achieved it because I was walking with two women who were walking prior to doing the above mentioned marathon the following day but wanted to keep up a good pace. They were very kind to let me walk with them since I didn’t know them.

New experience number three (what a busy few days), was to eat at a Sonic drive in for the first time. To be frank, I really hate their commercials, but I had heard they had tater tots, and they still have that car-side service thing going on (though without the trays that latch onto the windows like they had in the “old” days). Angie and I had just completed a hike up in Cañon City and were really hungry. We’d spied a French bakery on the way to the hike that looked interesting, but by the time we came back, it was closed for the day, so Sonic was our second choice. We were both pretty hungry from our walk (plus I had already walked that other three miles in the morning) and didn’t want to wait too long to refuel. I tried the afore-mentioned tater tots, along with some chicken strips, while Angie had tater tots, popcorn chicken, and a cup of cherry limeade. None of it was anything special, but we were happy to get some food inside ourselves before driving back to Pueblo. By the way, Angie is blogging about the hike.

Fourth new experience in four days: Standing on the corner waving a sign at the traffic in the middle of the lunch hour. Monday was Presidents Day and a group of local activists wanted to show their support for a thorough investigation of taxes/Russia, all that. I created a hand-made sign, slightly off topic, urging our local reps to not be chicken about town hall meeting with constituents (it actually said, “Scott/Cory Townhalls, Maybe?”, and cruised on down on my single speed. I was a little nervous because only 5 people had RSVP’d on my Facebook group, but there were closer to 30 people in attendance, along with at least two TV stations. We waved our signs for about 20 minutes, mainly to a positive reception of waves and honking horns. There was the occasional shout to get an effing job (I’m trying), to which many people responded that today is, for many, a holiday. First Amendment at work folks.

I didn’t realize that the protest was only the start of several events (a little march and then a meeting of one of the sponsoring groups). I didn’t know about all this, and wanted lunch. I figured given how nervous I’d been about showing up, being there for a half hour was a win for me, and I cycled home to lunch and the puppy, and more job hunting.