Colorado has perhaps more than its share of scenic train rides. Until this month, I’d only ridden the Durango & Silverton Narrow Gauge Railroad, which travels a beautiful backcountry route and spews cinders and smoke (definitely worth experiencing some time other than now).

My parents were spending several days with us in southern Colorado in late May/early June. During last year’s visit, we had just moved into our house (and it was super hot), so all our time was spent on projects and none on fun. I was determined that this year would be different. During the week, we visited Squawk Coffee, Shamrock Brewery, AngleTech (trike shop) in Colorado Springs, Bingo Burger, and the Pueblo Zoo. And we did NO projects.

Maureen and I had already been thinking about riding the Royal Gorge Route Railroad, so we decided to do that on Saturday, when Maureen could go too. We booked tickets a couple days in advance for the breakfast train—some of the later trains were sold out, but there were plenty of tickets for the early train. Also note that you must book a couple of days out to prepay/prebook your meals.

We arose early on Saturday and made the short-ish drive to Cañon City—the worst part of which, as always, was the stoplights in Cañon City. We arrived and claimed our tickets, then had a short wait to board. We had to walk through a few train cars to reach the Club Car, where we were seated at standard tables. The car had its own bar, kitchen, and wait staff. The large windows provided plenty of viewing space, even if you were on the inside side of the table. Part of our breakfast awaited us, yogurt parfaits and local apple cider. We had ordered two breakfasts for the four of us after reading the descriptions. (We went with the Colorado Sunrise Breakfast.)

We enjoyed the scenery—and tasty San Luis Valley coffee—along the Arkansas for a while before ordering our entrées. They were tasty, but not huge, though we had enough for the moderately small appetites of our party (and we did have a first breakfast earlier). After breakfast, Mom decided to brave/enjoy the open-air car. Maureen joined her for a while, then switched off with me, and some nice shots of the canyon and bridge were captured.

While we were enjoying the warm comfort of our indoor seating, we saw many rafts full of people enjoying the Arkansas in a colder and closer fashion. We did not envy them. We were particularly disturbed by the lone kayaker chasing an extra, empty kayak. Hopefully, all ended OK, as there were no tragic stories in the news. The rafters seemed to enjoy waving at the train passengers—and vice versa. 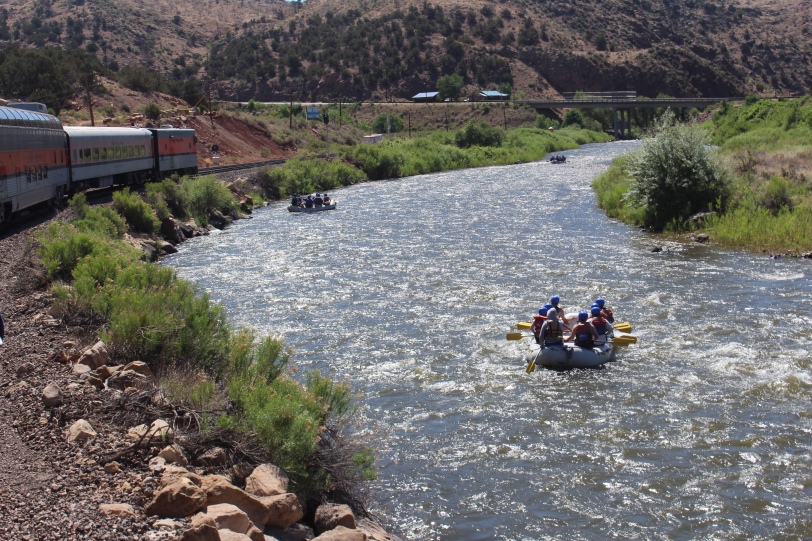 The train travels an out-and-back route, so there were no surprises on part 2. We stopped for a few minutes under the Royal Gorge Bridge so that everyone could take pictures, then braked all the way back into Cañon City. We passed most of the rafters again, but never saw the lone kayaker.

There was not a lot of wildlife spotting on this trip, but we saw two Great Blue Herons and many large, beautiful butterflies. If you go, remember that breakfast is less crowded, and club allows you to eat at a table instead of on a tray in your lap. The Panoramic Dome cars looked nice, but whether they’re worth the upgrade cost is definitely a personal decision.