Maureen is going to write about our adventures in Mason City, so be on the lookout for that one in the next couple of days. In the interim, I’ll bring you up to date on where we are and what we’re doing. We arrived in Minneapolis Monday to attend the International Champions Cup match Tuesday between Tottenham Hotspur (COYS!) and AC Milan. So we essentially had one day for Minneapolis activities. We decided to ride our bikes.

It was my goal to avoid driving once we arrived in the city, so after a minimal breakfast of yogurt, tea, and Honey Stinger waffle (I’m not sold on the exercise waffle concept), we left from the hotel parking lot and headed for the Minneapolis Visitor Information Center. Though it was only a few blocks away, it was a bit of a challenge to get to. Though there are many bike lanes in downtown Minneapolis, there was no obvious way to make a left turn in traffic. (I would call this a variation on the last mile problem–you can get into the city on fantastic paths, but getting to the actual place you want to go can be challenging.) Once there, Maureen acquired both a bike map and a city map. We took off down Hennepin towards the Mississippi River, but discovered that we could not access the riverfront bike path that way. So we followed some alleys around the Federal Reserve Building and found our way to the Cedar Lake Trail, which connects to the Chain of Lakes. 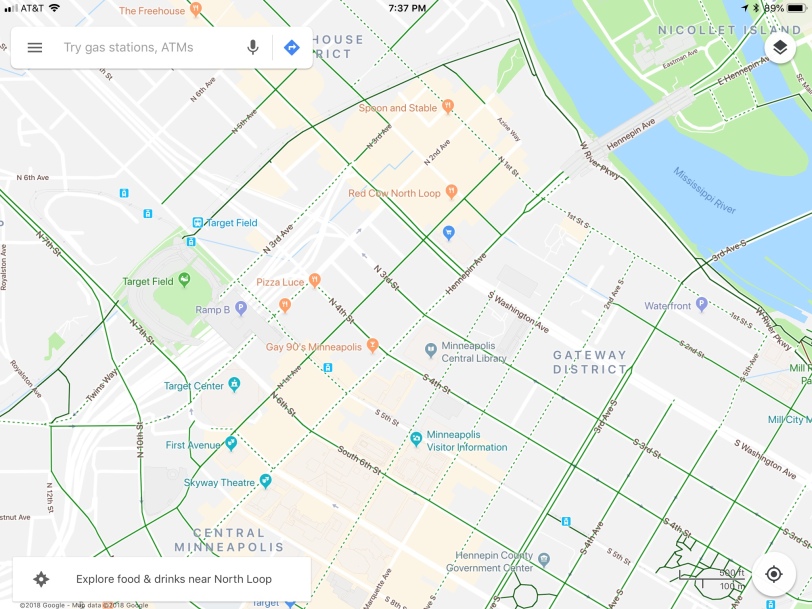 The Chain of Lakes trail system is part of the Grand Rounds National Scenic Byway. We weren’t necessarily feeling ambitious enough for the whole loop, so we went around Cedar Lake and Lake Calhoun (now more commonly called Bde Maka Ska, which means White Earth Lake in Dakota) and headed for Lake Harriet. We discovered along the way that the trails circumnavigating the lakes are one-way only, but we still haven’t figured out why. We rode the streets around Bde Maka Ska to avoid this, then gave in and went with the signed direction around Lake Harriet. 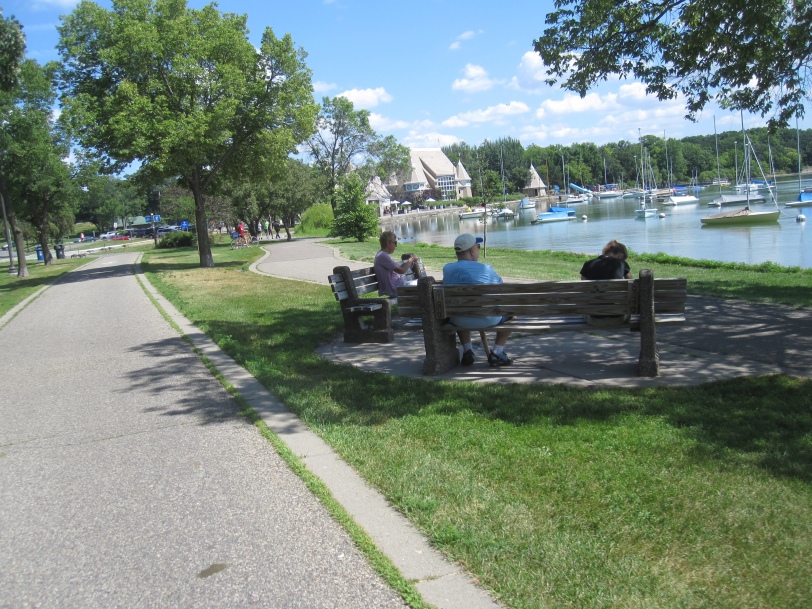 I had planned a diversion near Lake Harriet, which did involve riding up the only hill of the day. It’s always worth it for ice cream though, right? We stopped at Sebastian Joe’s on Upton Avenue just a few blocks from Lake Harriet. The setting is lovely and peaceful and the ice cream is creamy and delicious. I had the Pavarotti, one of their signature flavors with banana, caramel, and chocolate chips (it brought back memories of eating lots of Chunky Monkey as a college cross country runner), while Maureen had, of course, the Vietnamese Coffee. She reports that the dark roast coffee they use to make it imparts a rich coffee flavor. We would definitely ride up a hill to go there again. 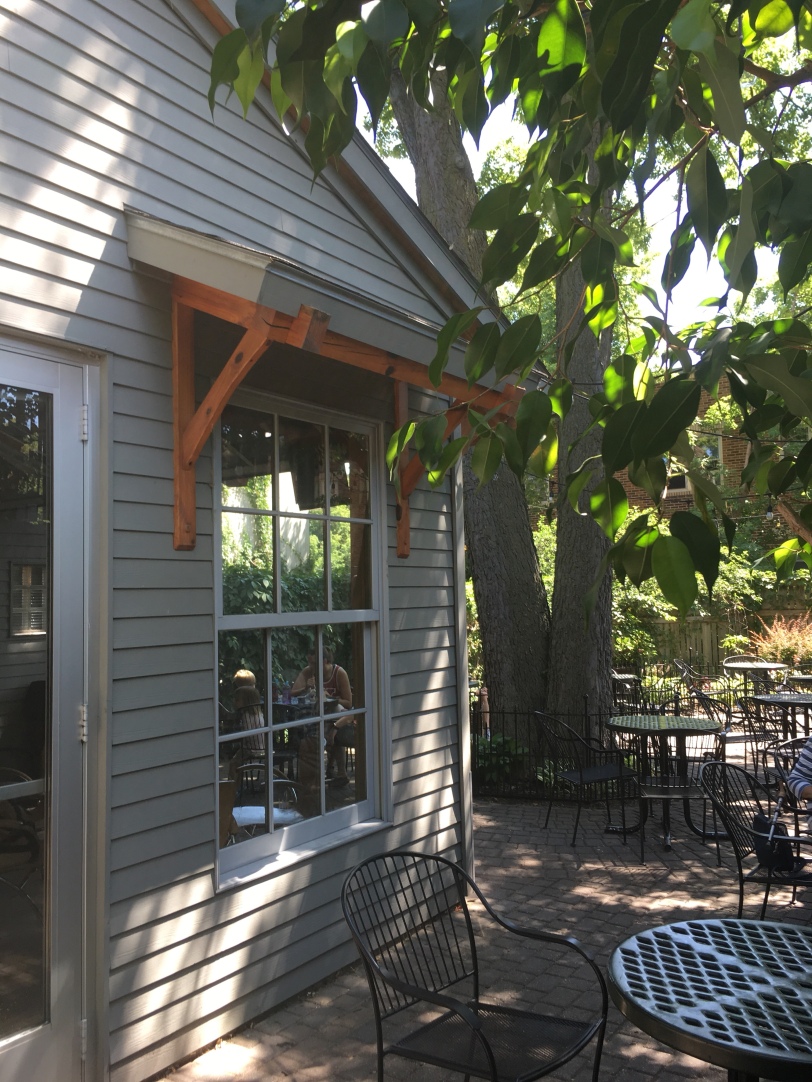 After ice cream, we finished the trip around Lake Harriet, then traveled past Bde Maka Ska to Lake of the Isles, which we agreed was our favorite of the lakes. 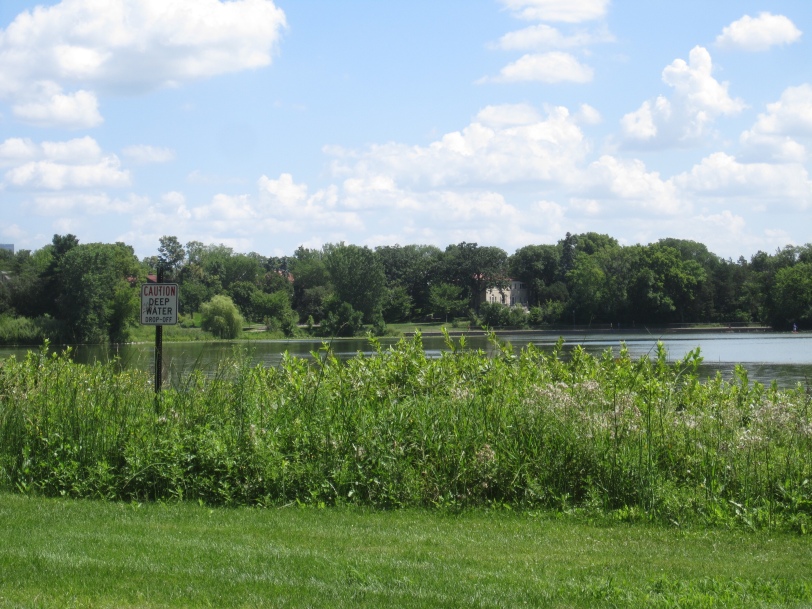 Our route back took us through the Minneapolis Sculpture Garden, where we started seeing people in Spurs shirts everywhere. We used Google Maps on the phone to help us find a different bicycle-specific way back to the hotel–it worked pretty well–in plenty of time to get ready for the match. Stay tuned for a future post on the evening and the match.