It’s been a while since we had what we call a transition day, a day in between phases of our trip where we’re switching modes, bases, or something like that. Today we were ending our too-short time in Stowe (one could easily spend a leisurely week in the area and see a fair amount of attractions-and shop), and transitioning to the biking part of the vacation. We had a short drive before us to get to Brandon, the start point, so we decided nothing needed to be rushed.

However, we did get up early so that Angie could go for a run and I could take a walk. We drove to the far end (for us) of Stowe’s paved recreation path, which runs partly alongside the West Branch Little River. We walked and ran for an hour. Despite the heavy rain that had fallen previous night, it was quite lovely out, but super humid. 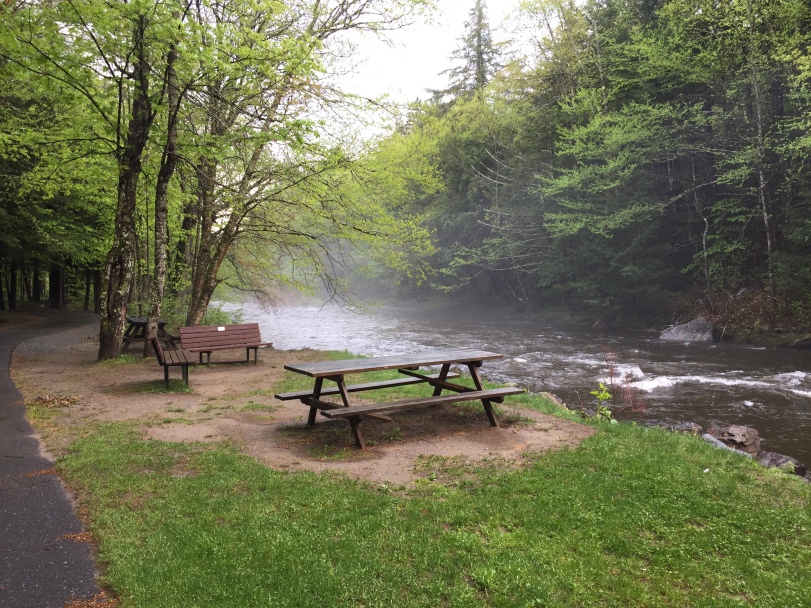 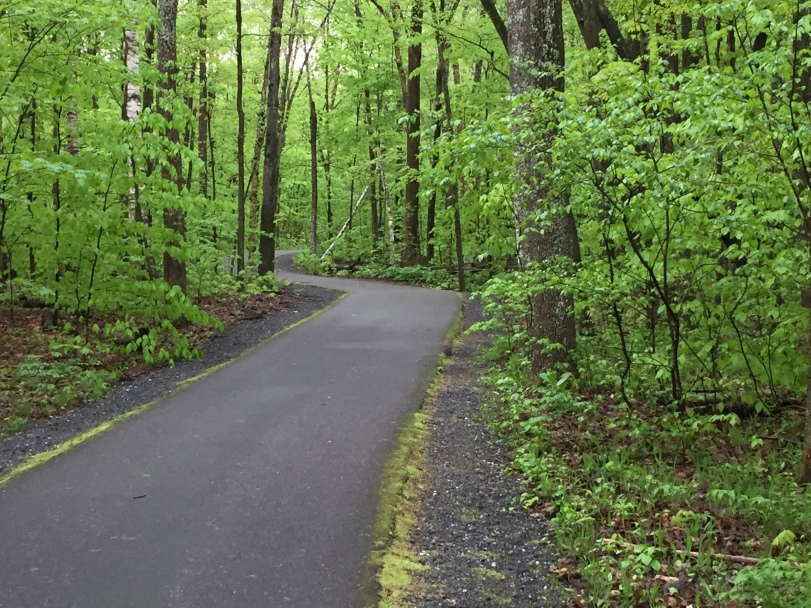 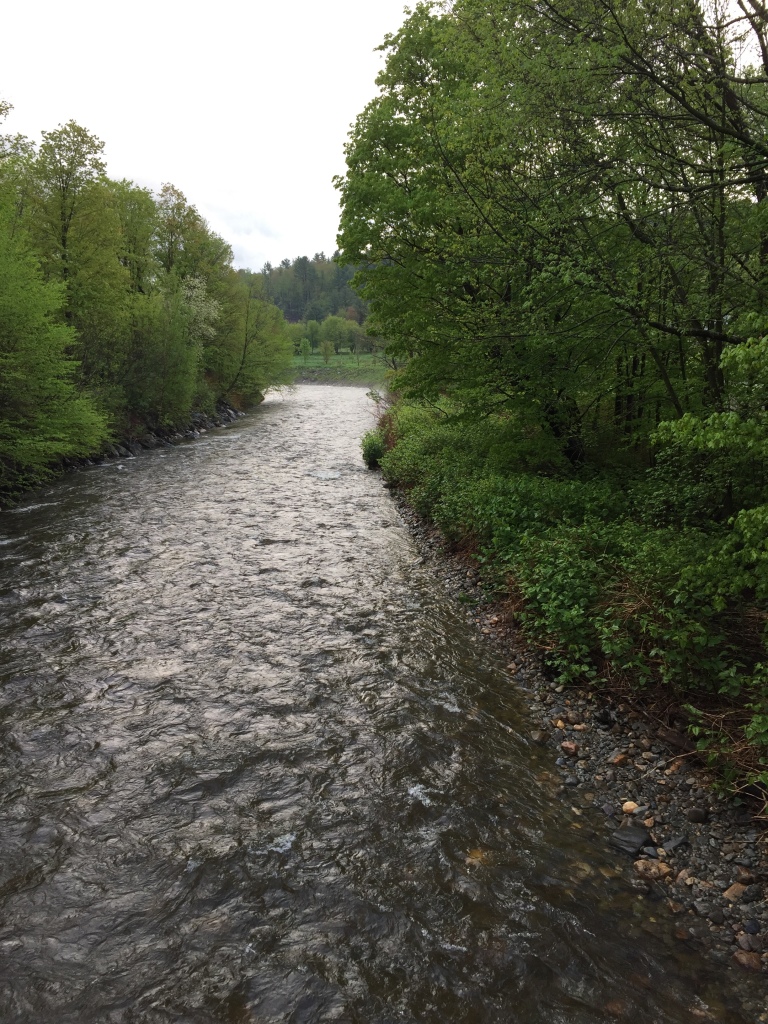 After returning to the Brass Lantern Inn, we had our final tasty breakfast and spent a little more time visiting with Mary Ann and George.

We paused on the way out of town to gas up the car and exchange some coupons we’d picked up for Laughing Moon Chocolate for some free truffles. I selected the mocha and Angie chose the maple. We also picked up a bar of their dark mint chocolate, which was delicious and was quickly polished off over the next couple of days. The truffles were good but super rich. Angie found hers so rich, she couldn’t even eat it all at once.

Before heading off in earnest we stopped at Vermont Artisan Coffee and Tea for a hot drink or the road.

The scenery was pretty and we didn’t feel rushed, but we only stopped when we saw something interesting on the side of the road. We had a quick stop and short hike at Warren Falls. This is a popular spot for water play and, apparently, from what I read online, for cliff diving. We just watched a few people and dogs gamboling around. 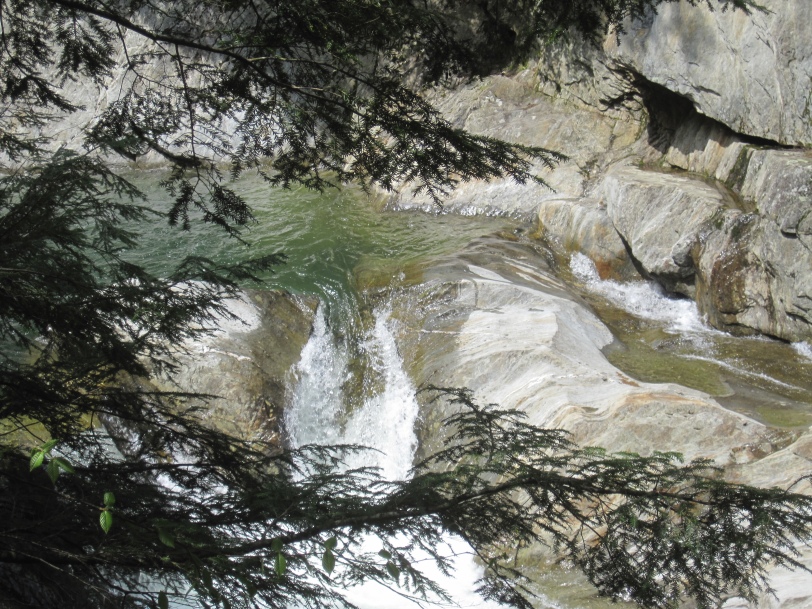 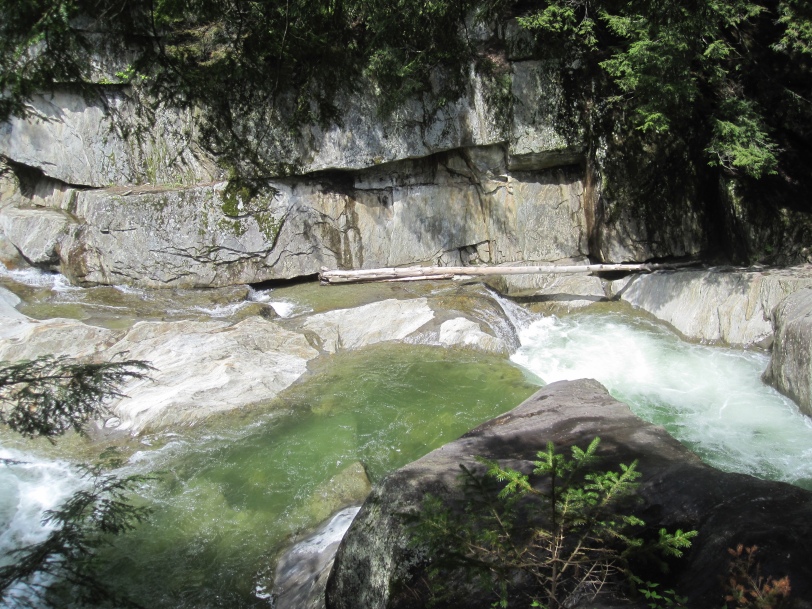 We didn’t stop again until we neared Rochester (Vermont), where we saw a sign for a berry farm. Driving up to the farm stand (Vermont Sunshine Organic Berry Farm), we were not sure if the place was even open. However, a very kindly gentleman walked up to us. He confirmed that the stand would not be open for a few weeks, since the berry plants were just flowering, but he proceeded to tell us about the farm and the different berries they were growing. We were pleased to hear that the farm is organic, and saw the proof ourselves in the use of a flame torch to kill weeds. The owner, Bob, is originally from Melbourne, Australia, but he’s been in the US almost as long as I have. He gave us a taste of the five honeys the farm currently has and we bought a small jar of our favorite and a jar of the home-grown and -made raspberry jam before heading down the road.

Angie had heard about a bookstore/bakery/coffeeshop in the next town, and we told Bob we planned to stop there. He spoke very highly of Sandy and her offerings. I had had a rhubarb turnover and some coffee, while Angie had a huge bowl of veggie chili and some hibiscus tea. We found a nice place to sit outside just as it started to pour with rain. Fortunately, our space was well sheltered, and we invited three other people to join us so they could be out of the rain. It wasn’t super cold despite the rain but we were glad to be fully sheltered and not ready to leave until after it stopped. We wandered over to the Rochester Cafe to get some ice cream. The source for their ice cream was out of Maine; it was ok but not my new favorite. 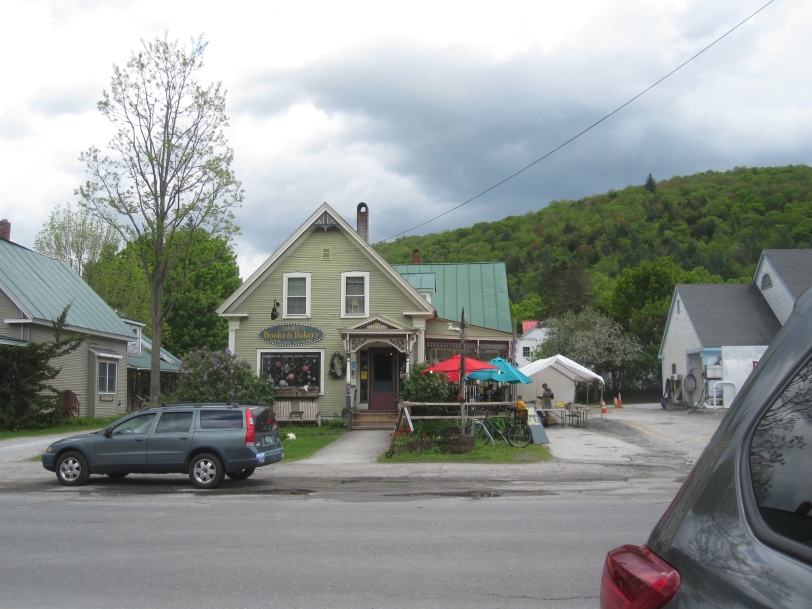 We also walked down to the very quirky Green Mountain Bikes, because, well, it’s a bikeshop. The entrance is a little obscure, and it’s a drawbridge! And once inside, well it doesn’t look like anything I’ve seen before as a place to buy new bikes. If you want anything in this store, you’d clearly have to ask for it. No display cases for accessories and the bikes are seemingly just piled in, but they carry a lot of brands. The owner, whose name we later learned is Doon, clearly knows what he’s doing, since he’s been in business for 30 years. He was super friendly and chatty as we talked about the mountain bike communities in Pueblo (our hometown) and his local, Rochester area.

We finally left Rochester and drove the last few miles on to Brandon. We checked into our hotel, the historic Brandon Inn, and were given our rider packet, which was chock full of route information and maps, including very clear guidelines about where we would and would not find food during our travels. After a decent but unremarkable meal at a popular local restaurant, we retired to our room and did some preparation for the next day.