Day 3 dawned much less wet than Day 2, thankfully. Swift House Inn provided an ample breakfast, with pastries, fruit, and yogurt followed by hot options (we both went with scrambles). It was still chilly, so we didn’t rush to get started, but packed up and got our bags downstairs by 10 for Seth’s pickup. Our clothes and gear had dried adequately overnight, thanks to many changes of wadded newspaper in our shoes. We put all of the layers on again and carried our rejuvenated batteries to the bikes tucked away in a small shed. We did wonder what happens if there are more than two bikers staying at the Inn, as our bikes completely filled the allotted space.

We saw some birds this morning, including a Heron and an Osprey, and of course plenty of cows. The scenery was lovely, as it was throughout our visit. 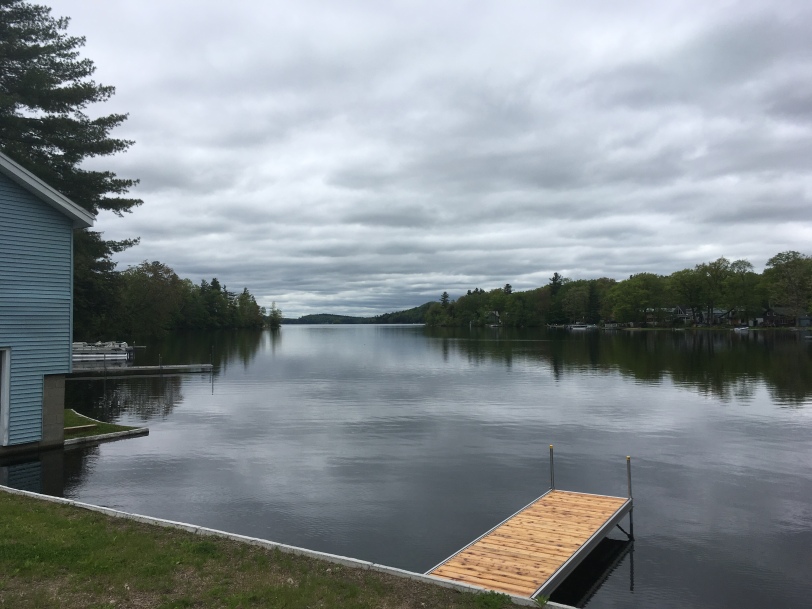 The suggested lunch stops included a pub with sketchy hours (it didn’t open until 3 p.m. this day), a deli that hadn’t yet opened for the season, and a camp store, which turned out to be our only choice. We kicked ourselves a little for not stopping at the Natural Foods Co-op in Middlebury before our departure, then settled in to a makeshift lunch. The cheese food was tasty, at least. We tried Ben & Jerry’s pint slices (The Tonight Dough) at this stop as well. Pretty good, but I prefer the actual pint. 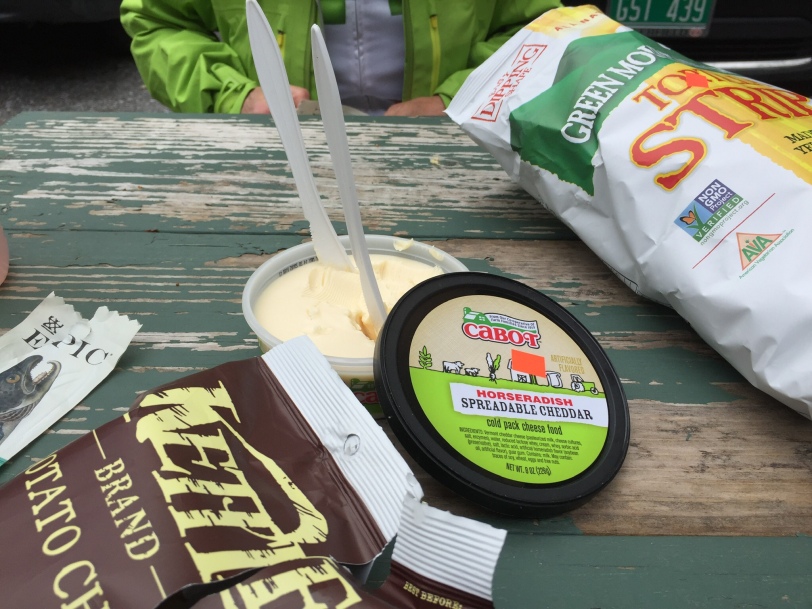 The rest of the ride was around Lake Dunmore. It was scenic, if cool, but I wouldn’t want to ride it in high season. We skipped the recommended hike due to muddy conditions and headed into Brandon. Our second stay in Brandon was at the Inn on Park Street. Innkeeper Judy greeted us and offered something to drink. I immediately asked for tea (hot, English), which she was more than gracious to provide. It also came with her pistachio and dried cranberry shortbread. There may be no better way to finish a chilly bike ride.

Number of cookies originally on that plate will not be revealed…

After cleaning up, we wanted to go into town to watch the second half of the Europa League final and perhaps have a drink. This turned out not to be possible. Only Brandon House of Pizza (no TVs) and Center Street Bar (one TV with a broken remote—really??) were open on this Wednesday afternoon and neither could access the match. So we returned to finish watching at the Inn after trying a maple cremee at Eis. It was basically soft serve, but seems to be a Vermont thing, so I felt I had to try. It was decent, but I would only have one again on a hot day in Vermont.

Dinner was at the Inn and we were the only guests (this was also the case at Shoreham, but there the pub is also a restaurant, so many locals were dining). Judy made for us a delicious Caesar salad and chicken Marsala with rice and broccoli. Everything was perfectly cooked and flavorful. We finished off with ice cream (ok, it really might be possible to have too much in one day), hot fudge, and berries and a long chat with our hostess. As Samantha Brown would say, this is definitely a place to love.