What a great adventure

I find it hard to believe we’ve only been on the Danube for two days now. Today we rode from Moos, via Schlögen, to Linz. Having been driven up the hill from Kolbing to the guest house in Moos last night and been a little freaked out, we were thrilled to see that the profile to ride down and back to the Danube trail via Schlögen was much less intimidating, even on damp roads (it had rained overnight). This link shows the entire loop, which we kind of ended up doing, and you can see how much steeper the Kolbing side was than if we’d not been misdirected by the map we were using (which didn’t really connect all the dots if you stray from the Danube trail) and had gone up from Schlögen.
Going down this way did add some miles to the day, but I’m sure it was a lot less hairy, and we managed to complete today’s 63km or so at our fastest average speed yet. Of course, it was pretty flat, but it was still a lot of riding, including about 10km next to a very noisy highway towards the end of the ride that totally motivated me to put the hammer down. It was a shame because it had been such a pretty and peaceful ride until then. It was foggy for much of the day but we could still see enough to enjoy the ride. It wasn’t great for pictures but I have a few to share.
During today’s ride, we passed the obligatory schloss (castle) on a hill. 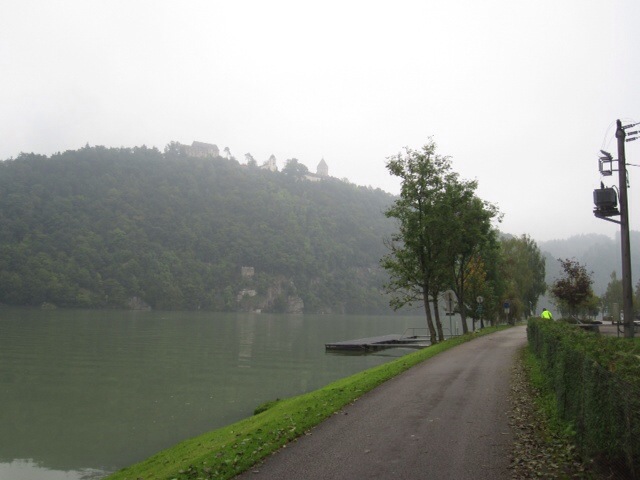 We also passed a bike information point that had a vending machine for tubes. 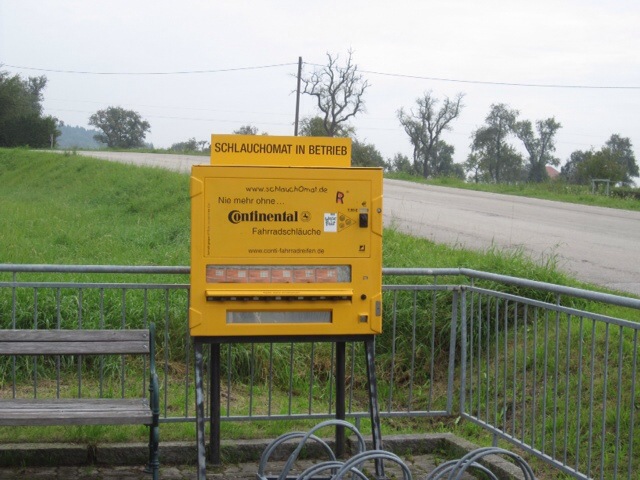 Angie checked it out and it offered a wide range of sizes for “only” €7.50.
We also rode through Ottensheim, fortunately timing it just right so that we were not slowed up by the big Donaulauf Ottensheim race. We thought the course was being set up for tomorrow but it seems we somehow managed to work around the different events today, including a mass start at 3:00 pm. 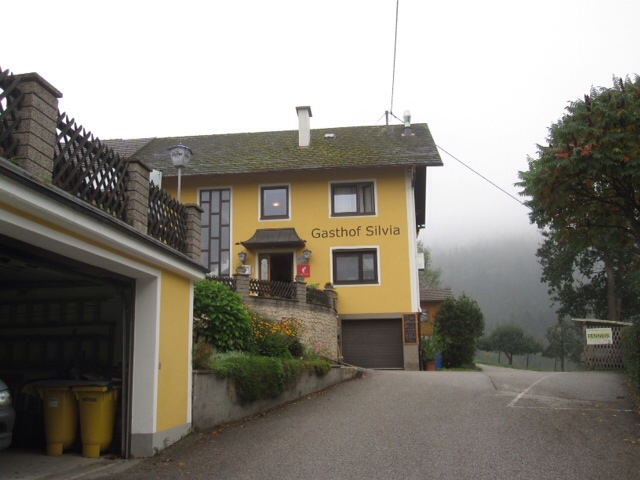 As Angie mentioned yesterday, we had a very good dinner at the guesthouse last night, and breakfast was also excellent, for a continental style offering. We were disappointed that there were not eggs on offer as advertised on the website, especially since there were chickens on site and we haven’t had eggs for breakfast much since we left England. Nonetheless, there were some great cheeses and spreads and I think we fueled ourselves up adequately for today’s stage. Almost everything about our stay at the guesthouse was perfect, including the drive up from Kolbing yesterday, which afforded some astonishing pastoral views. The one downside was that I was up half the night swatting at mosquitos, and am covered in welts today. I’ve been rubbing Benadryl on my face, arms, and legs all day.

We arrived at our hotel in Linz during a bit of a rainshower, but it was warm enough and mild enough that we didn’t get too wet. The hotel was actually signposted from the trail, and was well-signed until we actually got up to it, where somehow we missed the entrance and sailed on by, only seeing it when we stopped and looked behind us! The hotel, Harry’s Home, is another small chain that is trying for a different concept. It’s part suite hotel but it offers numerous packages and extras, as well as a bike work area in the garage. We opted for a self-catering set up, which is like a studio, but very mod. We are staying here for two nights so we can see something of Linz (yes, home of the Linzertorte). The kitchen facilities in our room are pretty minimal (two burners, one small skillet, one medium sized pot). We settled on a weekend menu that would work under these constraints and set off on the long trudge to the grocery store (50 yards perhaps). Being In continental Europe, we knew that our shopping options tomorrow would be limited, so we made a list and spent far longer in the store than we would have liked, but got enough food to provide two breakfasts, two dinners, and lunch materials for Monday when we are on the bikes again. We also purchased a couple of Angie’s new favorite lime-flavored Radlers, and a €1.99 bottle of Tempranillo for me, figuring that whatever I don’t manage to imbibe will not be too much of a waste. We did have to buy 3 bulbs of garlic to flavor our cooking since the store sold neither onions nor garlic individually. We made it work though, and had a very satisfying dinner of chicken burgers, mashed potato and cauliflower.

Sitting here finishing up this entry and hoping to get to bed soon, I’m relishing what was perhaps the best part of the day. It was instigated by the sad state of toilet availability along the Danube trail, which is not as bad as some we’ve seen, but not great either. We pulled into Aschach and saw a bike shop, so I went in to ask where we could find a bathroom. The young man pointed me to one of the patisseries next door (there was one on either side of this store) and reassured me that they didn’t mind people just using the bathroom. However, we were greeted so kindly by the woman working in the store that we couldn’t help but stop for a coffee and a pastry. We are in Austria after all. The pastries were good (and super sweet) and the coffee strong, but what really marked out this spot was our exchange with the server who had greeted us so kindly. We thanked her for her kindness and wonderful customer service. She told us at she felt that it was only right that she be hospitable to people, and asked what would be the benefit of being rude and not allowing people access to the bathroom. This of course is rather in keeping with how Angie and I try to see the world, so we ended up having quite a lengthy conversation with the woman, which mainly consisted of hearing her rather interesting life story. A native Croatian (why on earth was Croatia not on our itinerary she wondered), who had lived for many years in Germany. She returned to Croatia and was managing a grocery store, but realized she was not living her life in joy, being online, on the phone etc. from morning till night. So she moved to Austria, asked the manager of the patisserie to give her a try, and if she liked her work, to help her get a work permit, which all happened. She was living her life more on her own terms, and of course it totally resonated with Angie and I, given the goals of our trip to enjoy our lives and maybe figure out what some of our next steps might be. Encounters like this give us so much joy while validating our approach. What a great adventure!

One thought on “What a great adventure”