A Jew in Jewish Prague

Rick Steves says the tour of Prague’s Jewish Quarter is profoundly moving, and of course, as a Jew, that goes double at least.
Josefov is the name given to the area where the Jews of Prague lived from medieval times forward. Of course they were constrained to a specific, and small, geographic area as in most cities. The name is after Emperor Josef II, who emancipated the Jews who were confined to the ghetto hitherto. Most of the area was redeveloped at the end of the 19th and start of the 20th centuries, but six synagogues and a few other buildings remain, along with the ridiculously overcrowded cemetery, which for hundreds of years was the only place in which Jews could be buried and is supposed to be the oldest known Jewish cemetery in Europe.
I don’t think I’m going to do a complete travelogue of the tour we did today but make some comments about highlights and impressions. We don’t have a ton of pictures because there are areas where picture taking is forbidden and other areas where it didn’t seem right to me.
The area is also known as the Jewish Museum in Prague, and we toured all of that plus the separate Old-New Synagogue, which is still a functioning congregation. We were rather disappointed that the Maisel Synagogue, which houses a large part of the exhibit, was currently closed. This is the third time we’ve bought a “package” on this trip and had one of the key components be unavailable with no price break. However, anyone who comes to Prague should see this, even if part of it is closed. Don’t forget things aren’t open on the Sabbath and Jewish holidays though.
If you follow the Rick Steves’ recommendation (which also seems to be the natural flow), the tour starts at the Pinkas Synagogue. This was probably the part of the tour that affected me the most deeply. I’ve been so exposed to books, films, exhibitions, stories of the Holocaust through my life that I’ve kind of been over it for a long time. However, this is the first time I’ve been somewhere there is the tangible awareness that it was a part of this atrocity. Even before seeing the part of the exhibit that showed the art work of the children at the Terezin Concentration Camp, I was feeling pretty emotional and teary-eyed. What most upset me, for want of a better word, were the names of the more than 70,000 people of the Czech lands who perished in the Shoah. The Pinkas synagogue is no longer used for services, but the walls of the sanctuary and women’s gallery were inscribed with the names of those who were lost. This moved me to tears. And a little anger that after the communist takeover, these walls were scrubbed. The names were rewritten after the Velvet Revolution in 1989. I’ve seen lists of names before and always try to honor the lost by reading as many as I can, but today it was very hard. I choked up again while talking to Angie about it as we walked through the cemetery.
As we walked into the synagogue I was thinking to myself that I hoped the entire district was not given over solely to commemoration of the Holocaust, and it wasn’t, but I’m glad it was given the prominence it was, and I’m glad I witnessed it.
The whole tour was excellent, but the other highlights for me were the Old-New Synagogue and the Spanish Synagogue. The Old-New is amazing because it dates from the 12th century and is the oldest surviving shul in Eastern Europe. It was a great sight to see, including the little gaps in the wall that enables women to hear, but not see, the service. The Old-New is still an orthodox synagogue so the women remain partitioned off, to put it mildly. The Nazis didn’t destroy any of this synagogue because they expected to create a museum of the defunct Jewish people in the area. Thank G-d for small mercies. 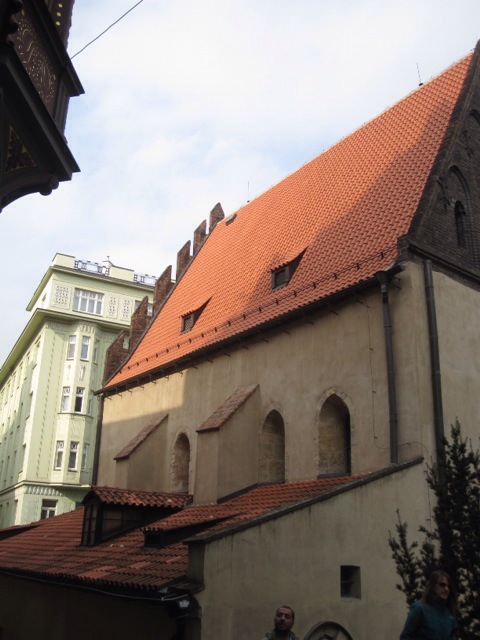 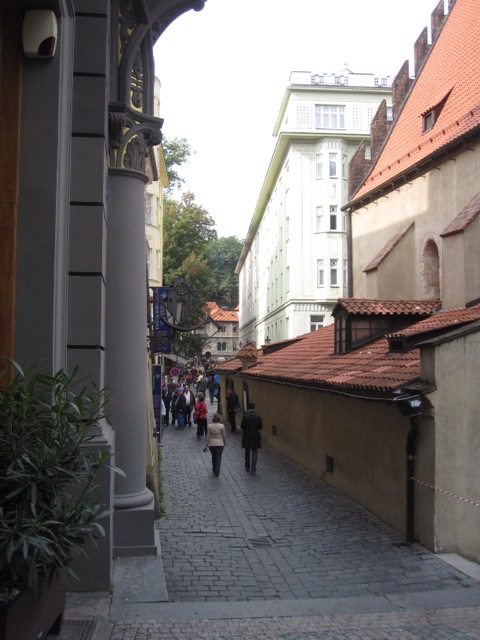 The Spanish Synagogue was seriously cool. I had assumed it was a Sephardic shul because of the name, but it was actually just a synagogue built in the Spanish style that was popular at the time. Built in 1868, the synagogue replaced the “old shul,” which had apparently predated the Old-New, which had been new but I guess became the old at some point in the 14th Century! I think this would was one of those Mum would have loved this moments though I think the full tour would have been a bit much for her even 10 years ago.
Our original plan for dining today was to get a cheapish lunch at a Latin American restaurant not far from the Jewish Quarter. It was in the Rick Steves book and on the Use-it map, so we figured it was worth a try. We changed our minds when we walked in and there seemed to be only two people there (who of course turned and stared at us). We wanted to make a quick decision about where to eat at this point because it was already 10 after 1 and all we’d had since breakfast was a cup of coffee each and a shared slice of apple tart. We decided to go back and reevaluate the menu at the Dinitz Kosher Restaurant, which we had nixed yesterday. Good call. We had been hesitant because kosher food is always expensive due to the high cost of kosher meat and the necessity of paying someone to verify that everything that comes out of the kitchen is kosher. It was worth every single penny (koruna). Angie had a chicken pasta dish and I had a chicken sandwich, which is about as apt a description as saying the Mona Lisa is a painting. Wonderful grilled chicken and onions that were probably sautéed in schmaltz were the high points, but the bun, salad, everything was wonderful, as was Angie’s dish. Mum would have loved that too.
I do wonder if it’s proper to use sauté and schmaltz in the same sentence.
Final picture, slight counterweight to all the Jewishness. 🙂 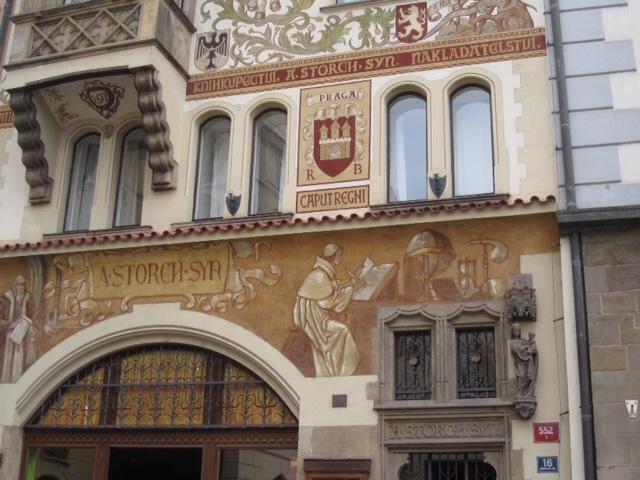 2 thoughts on “A Jew in Jewish Prague”