Not much to report today, since we spent most of it on a ferry. We got up at Oh-dark-30 to get to the port at Piraeus to catch a ferry to the island of Santorini, where we are hoping to spend a few days not doing very much.
The ferry left at 0725 and arrived at about 1450, so we knew we were not going to have terribly much energy left today, especially since we had a hard time finding much other than yoghurt and pastries to take with us for breakfast, and the ferry company’s idea of a restaurant on board is the Greek version of MickeyDs. On the boat we mainly read, watched people, and tried to nap. We definitely did not eat enough, or well, but we now know there ARE places to find food by the port, which is not always the case. Of course, we won’t be taking a ferry from the port in Athens again, so it’s moot for us.
Big lesson from this experience, per Angie, is that if you can afford it and are taking a ferry that leaves so early, you should pay for a cabin. There are basically four price levels on this ferry line. Cheapest, take your chances on finding somewhere to sit. Next cheapest, airline style seating with assigned seats. A bit more, what they call first class, which is a separate cabin with fairly comfy chairs and waiter service. The most, a cabin to yourself. We thought the first class would be adequate, but there were TVs with the sound on in all four corners and there was always at least one person near us talking on the phone at any given time. The chairs we picked were also not the most comfortable for napping. Lesson learned there. We are doing airline-style from Santorini to Naxos, since it’s a much shorter trip, and then first class again for Naxos to Athens, which will also be shorter since Naxos is on the way back, plus we won’t need to be up at 0530 for that one. If we can, I’m sure we will try for a slightly different seating configuration though.
Once we got to the island and were disgorged from the ferry with about a million other people, we found that there was a local bus waiting to take us up the hill to Fira proper, as the bus schedule is aligned to the ferry schedule. From what I’ve read so far, Santorini only has one industry, tourism, and even in the shoulder season, it quite busy.
Fira is about 250 meters above sea level (approximately 850 feet) and it’s a steep climb up a number of switchbacks that are thankfully large enough for big buses, though vehicles coming down had to stop sometimes. As we’ve quickly discovered to be a trait of our hotel host, we had exact and completely usable directions on how to reach the hotel from the bus station in the town square, which was an approximately 5-minute walk. Attention to detail and taking extreme care of her guests seems to be totally her thing. She first showed us three different rooms so we could pick the one we wanted. We picked the one with the best view, though the newest room had a fascinating bathroom. Angie deemed it a bit too cavelike though since it was slightly below ground.
She told us to come back to her once we were settled in so she could give us a map and some information. Little did we know that this meant that she would sit down with us in the lobby, ascertain our interests, and lay out a possible agenda for our time here, with information on how to get to different places on the island and places to eat. She didn’t even push us about eating in the taverna that is owned by her family (though she did give us a discount coupon), and she didn’t even mention that her family also owns a travel agency. I can’t believe they have fingers in EVERY pot she told us about, but anything is possible.
After her exhaustive information session, we headed off up the hill to the town center to see if we could find somewhere to eat with a view of the sunset, which is one of the most important things people do on Santorini apparently.
We managed to find a great spot at one of the restaurants inside the caldera. It does crack us up, however, that we enter a restaurant, ask for a table, are asked if we have a reservation, say no, and then are seated in a great spot anyway. This is not the first time this has happened on this trip.
The restaurant we picked had surprisingly reasonable prices for a caldera/sunset view, and had been recommended both by our hostess (Marina by the way) and our old buddy Rick, who, as I’ve mentioned before, is pretty tuned into the tourist trap avoidance gig. Of course, he is mainly talking to an affluent audience, but he does assume that price may be a consideration.
I’m not sure we had the best sunset ever here, but it was quite spectacular and relaxing to watch. But then, we live in Colorado, which does sunsets quite well too, shall we say. The meal was good, and we sampled some of the local specialties, including fava (a hummus-like dip) and local wine. We also splashed out and had dessert, orange soufflé with chocolate ice cream.
Final comment of the day before pictures, this is our second hotel in Greece and both of the rooms have had a fridge. First places we’ve been in ages other than apartment type set-ups where this has been the case. 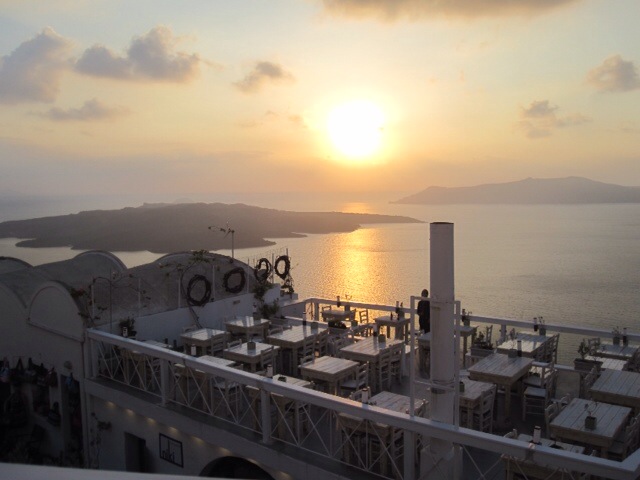 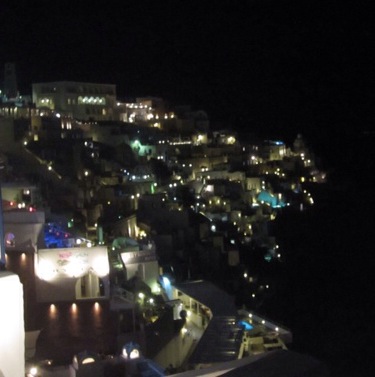 Oh, and Angie ate no feta today but she is still happy.