Feta, feta, and maybe some feta with that

I have been looking forward to Greece since before we started planning this trip. When we arrived though, I was not immediately impressed. The chaos level is a little high for me and being in a place where you can’t read (even phonetically) much of the signage is unsettling.
However, I think I have discovered the substance that makes it all better. I thought it would be ouzo, but it is in fact feta. I’m currently up to 6 meals in a row (yes, that’s every breakfast, lunch, and dinner since we arrived) that included feta and I’m feeling better about Greece with each passing hour (or meal).
Today (after an initial dose of feta) we started with laundry. This may have been my favorite laundromat of the trip thus far, as it was clean, bright, and adjacent to a sports bar (not quite in the American sense) that was more than happy to sell us good coffee while we waited for the washing machine to do its magic. We also met some fellow Denverites and chatted about our respective trips (they had just come from Turkey), which made the waiting even more bearable. (Aside: We met a couple from Boulder in our hotel yesterday too.)

Clothes cleaned and fully caffeinated, we made our way to the Acropolis Museum. This museum was completed in 2009, making it a new experience for Maureen even though she has visited Athens in the past. The entryway sidewalk is glass, so you can see the ancient ruins still being excavated beneath the building. The museum primarily houses artifacts from the Parthenon and other Acropolis sites.

The museum lobby holds models of the Acropolis over the years, so much of the history of Athens that we heard and read about yesterday was reinforced. You then ascend a ramp containing ancient artifacts unearthed on the hillside below the Acropolis. The next two levels contain statues and pediments (statue-like elements over the entrance) from the temples that occupied the Parthenon site. These statues also illustrate the development and progression of artistic styles. One particularly striking piece was the head of Alexander the Great, believed to be done from life. 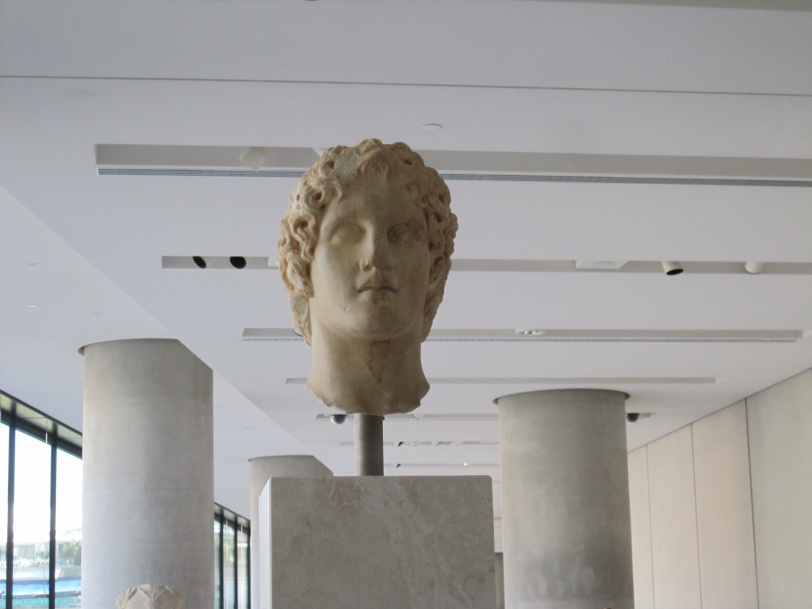 The other fantastic statues are the Caryatids, or lady-columns, from the Erechtheion temple on the Acropolis. Of the original six, five are here and one is the British Museum (more on that shortly). There are copies on the Acropolis, as modern industry caused more damage to them in 50 years than natural forces did in two millennia.

The museum clearly demonstrates (as did the Albertina in Vienna) how far museum design has come in the last few decades. The exhibits are clear and bright, with ample explanation (but without overwhelming or academic levels of detail) of the artifacts and the contexts in which they were created, “collected,” and restored. And by and large the localization (everything is in Greek and English) is very good. I do wonder, however, whether the support for visitors who are not fluent in English is adequate. A French woman we encountered yesterday seemed frustrated that the brochure at the Acropolis itself was only in Greek and English (and who can blame her?)

Back to the museum…
On the third floor–designed by the architects to mimic the size and orientation of the actual Parthenon above–are displayed the friezes and pediments of the Parthenon during its most glorious phase. Unfortunately, most of the displays on this level are plaster replicas because the originals were either (a) destroyed by later users of the temple who had different beliefs, (b) destroyed in a blast when the Ottomans used the temple to store ammunition while fighting the Venetians, (c) damaged by erosion, or (d) taken by Lord Elgin and displayed in the British Museum. The Greeks have long sought to have the treasures taken by Lord Elgin (called the Elgin marbles in England and the Parthenon marbles in Greece) returned to Greece. A longstanding response has referenced the lack of a proper place to put the frieze pieces and other treasures. Now that the Acropolis Museum exists, the battle has intensified, joined recently by the human rights lawyer who married a well-known American actor.

After the museum, we narrowly avoided the tourist trap restaurants that have sprung up around the museum and found our way to To Kati Allo just a few hundred feet away (thanks, Rick Steves). There, the proprietor showed us what was on offer for the day, treated us as welcomed guests, and served us tasty food at reasonable prices (including feta with salad, of course).

We indulged in a bit of tourist shopping on the way back to the hotel, then bought some snacks for tomorrow’s ferry ride before a quick break at the hotel. We were pleased to be able to meet Maureen’s sister Pam for a pre-dinner drink on the roof of the Central Hotel and enjoy great views and even better conversation. I am hoping that two glasses of ouzo will counteract the lack of feta for dinner tonight…

2 thoughts on “Feta, feta, and maybe some feta with that”