On our first port day, we decided to do a self-guided walking tour. Old San Juan is very walkable and the ships dock right in town, so it made sense to save some money by guiding ourselves. 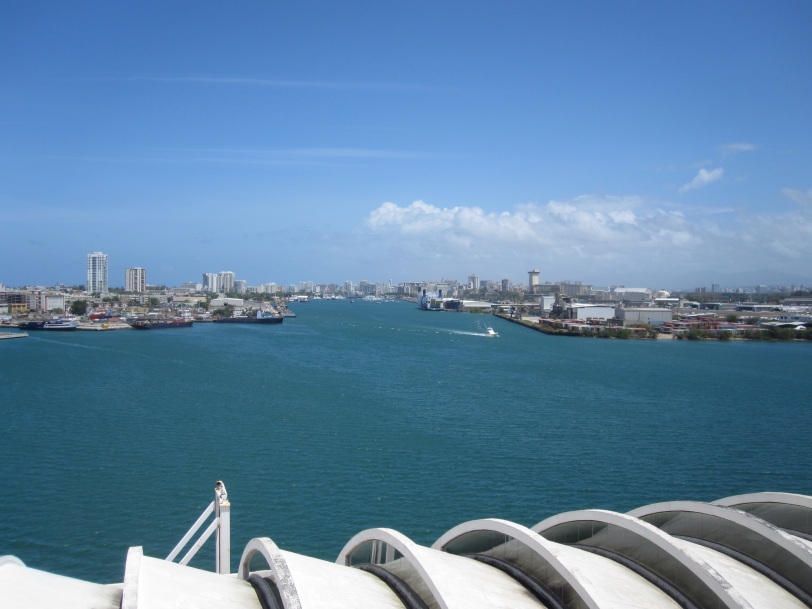 Since it was a late port call (1 pm), we started the day as we had the first sea day, with two breakfasts and a spin class. We then went to another show by the guest pianist, Hyperion Knight, who was giving a matinée since he would be leaving the ship the next day. A Berkeley native (thus the name), he offered history along with his music and played pieces ranging from Rachmaninoff to Andrew Lloyd Webber. Quite enjoyable. We then went to the

Lido for a bite of lunch and a view of the sail in. 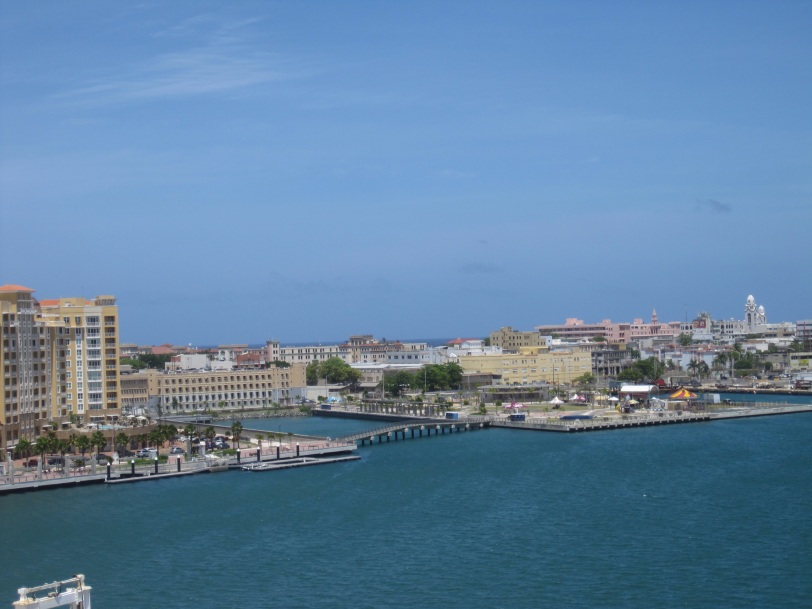 Getting off the ship was a bit of an adventure. Unlike other cruise lines I’ve sailed, there is no real order. Everyone just goes to the gangway (or more precisely, the stairs leading to the gangway) and waits in line with the other 1200 people on the ship to get off. We didn’t have a schedule, so we stepped out onto the promenade when the line got a bit much. We watched a couple get off with their folding bikes. We were only a little jealous, as I’m not sure I’m keen on cycling in much of the Caribbean. The bikes were Terns, by the way, and looked very easy to unfold and assemble. Eventually we joined the line and got off.

Once on shore, we used our cell phones–which worked fine since Puerto Rico is part of the U.S. and AT&T–to get our bearings. The route took us along the Paseo de la Princesa past a fountain and through the old gate to the city, Puerto de San Juan. 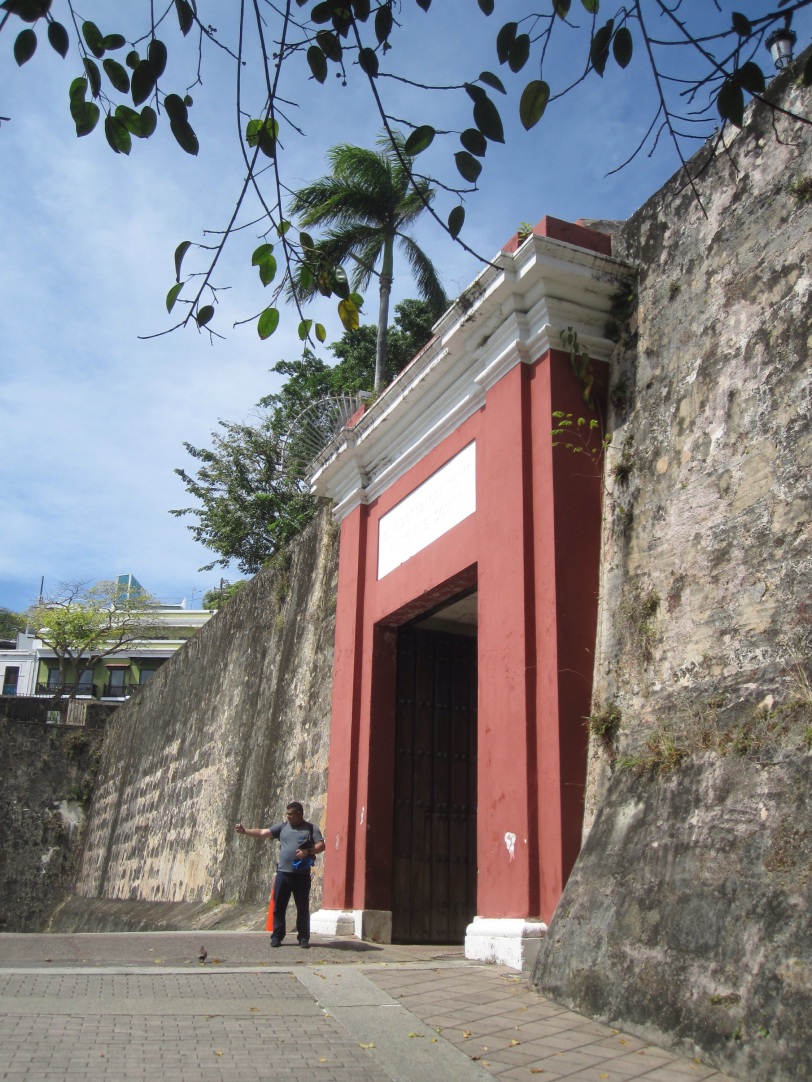 A quick view of a contemporary statue was followed by a visit to the Catedral de San Juan Bautista. 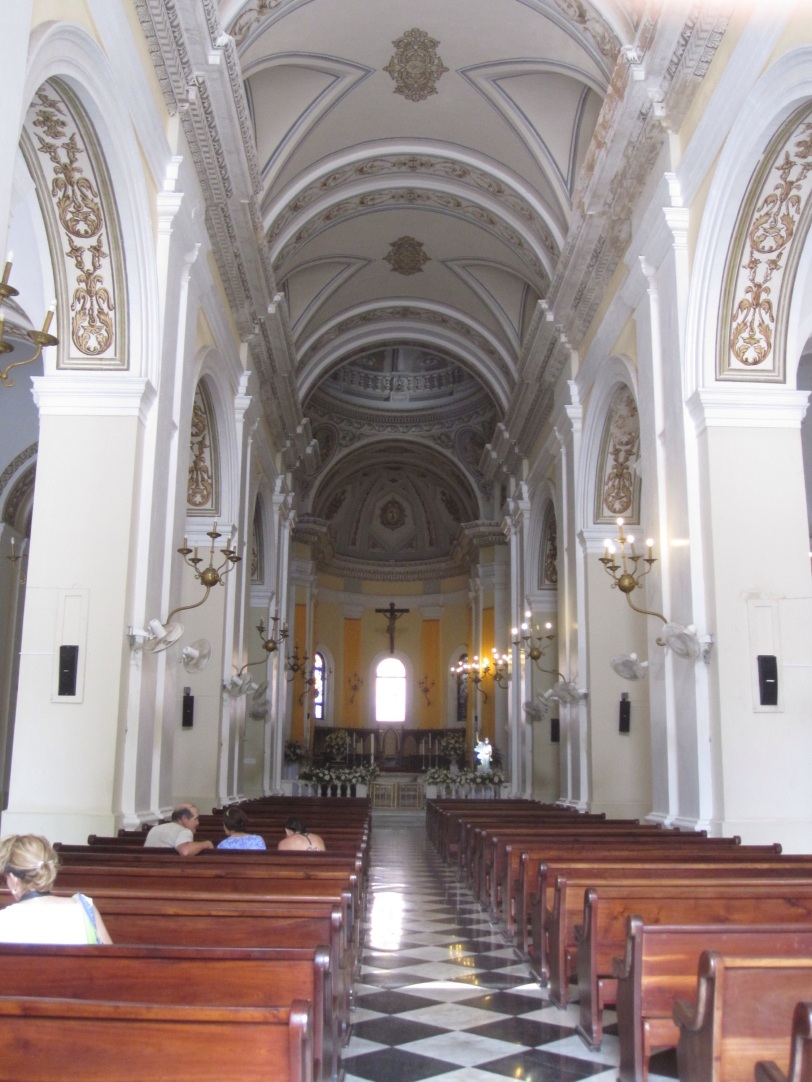 We tried to visit Capilla del Cristo, but it was locked up and people were “playing with pigeons” outside of it, which I just find disgusting. We made it through unscathed and headed up the hill to Iglesia de San Jose, a 16th-century church which was closed for renovation. Happily, our next stop was Casa Blanca, which was both open and free. This lovely colonial mansion is the oldest continually occupied residence in the Americas–at least according to my guidebook. It sights high on a corner with fantastic views, great breezes, and a beautiful garden. 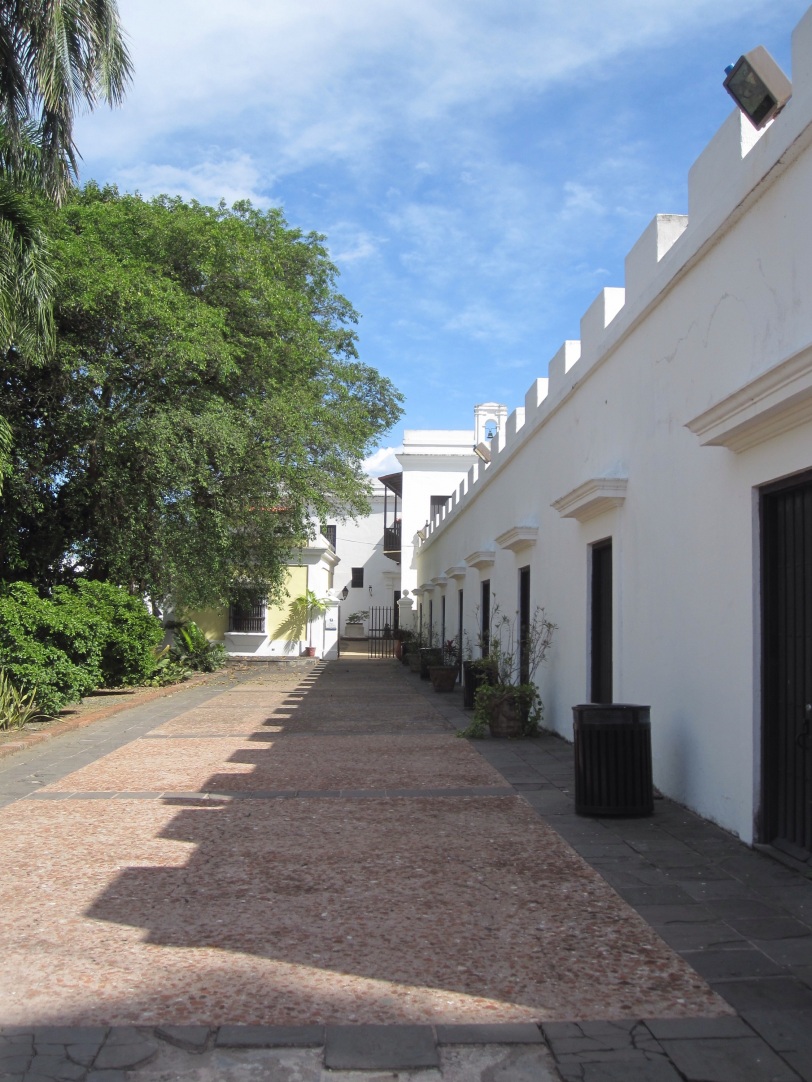 Next up was the first of two Castillos which make up the San Juan National Historic Site. After paying our admission ($5 each covers both forts), Maureen needed to find the National Park Passport stamp station. It was, of course, in the nice little gift shop. After this we wandered around the fort, of which we may have already seen plenty on this adventure. This one is important because of its role in protecting Puerto Rico and other islands in the Caribbean, and its 16th-century beginnings. Unlike battle structures that were used in only one conflict, ‘El Morro’ shows evidence of renovations due to advances in munitions. And the views are nice… 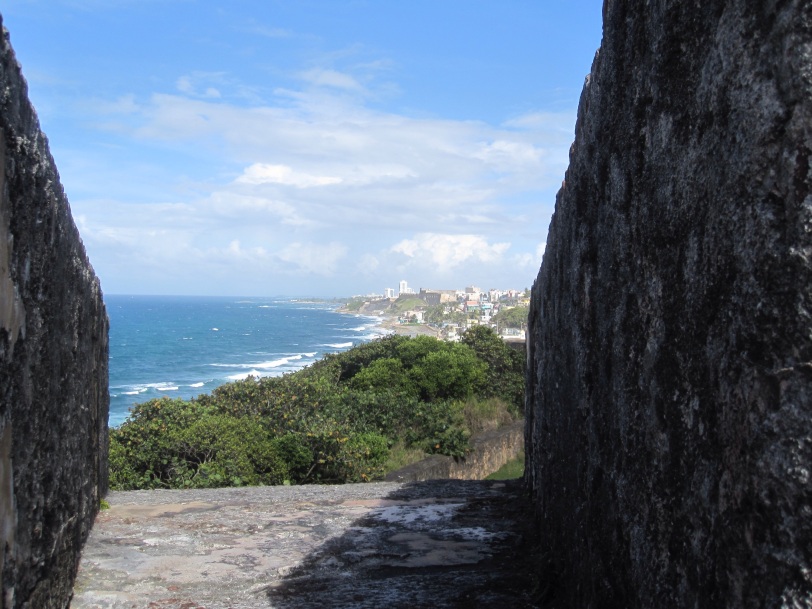 The three flags that fly over ‘El Morro’ are Puerto Rico, the United States, and the Burgundy Cross, a Spanish military flag. 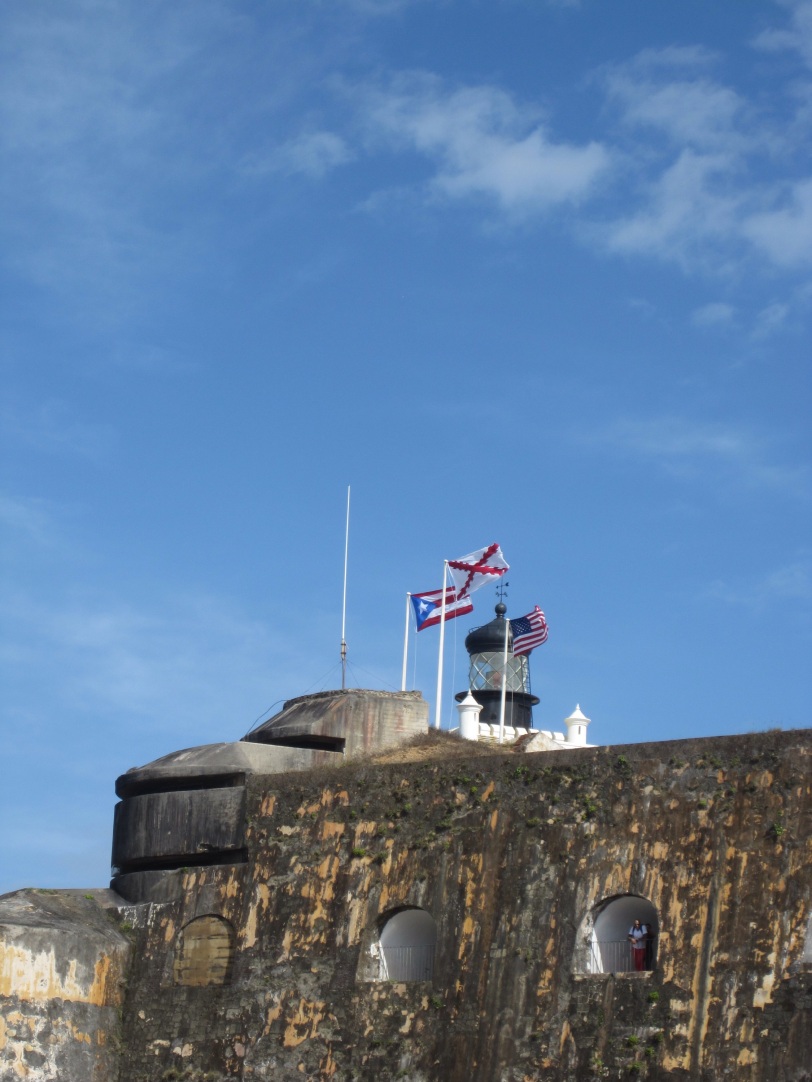 We next walked past the Totem Telurico and on to Castillo San Cristobal, the other part of the National Historic Site. It also has nice views and is a sprawling complex. Sadly, many of the exhibits were identical to those at the other Castillo. 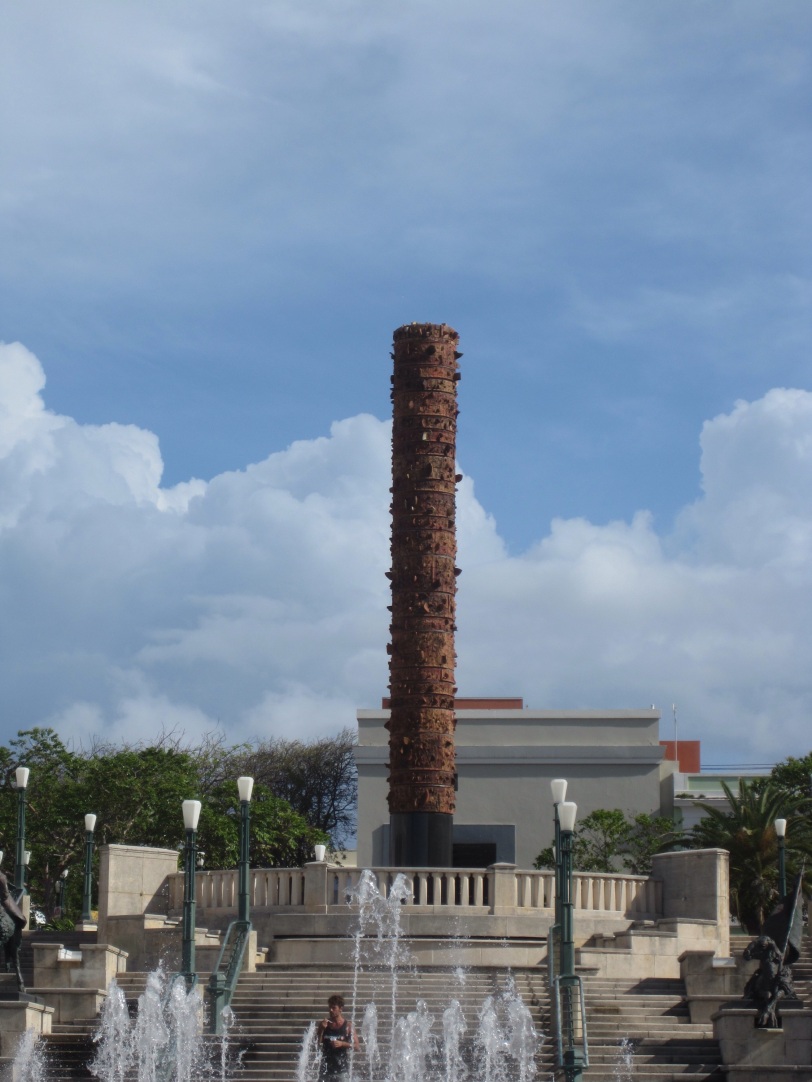 We finished our walk at Plaza de Colon, where one finds a statue of Christopher Columbus. A few meters away, we also found the fine American landmark, Starbucks. For the price of a coffee, we obtained a wifi code (yes, not so easy as in most Starbucks locations) and were able to check mail and blog.

We left Starbucks a few minutes before 6, as the duty-free store rep at the port exit had told us that the liquor store at the pier was open until 7. Sadly, she was wrong, so none of our liquor dollars were spent in Puerto Rico.

2 thoughts on “Sights in San Juan”