I don’t even know what “phase” of the trip this is–it no longer divides neatly into identifiable segments. But we have started a new phase. The plan is biking and camping, with my parents (and Rebbe and Lucie) along Adventure Cycling’s Atlantic Coast route. We have van support (read: Mom driving the mini-van), so we’re hauling neither gear nor dogs.

Sunday we drove to St. Augustine from Palm Harbor. We took a “backroads” route that kept us mostly off of the Interstates. We were rewarded with a more peaceful drive and wildlife sightings, including a fox that dashed right in front of us. We arrived on the Atlantic coast mid-afternoon and set up camp at Anastasia State Park. It is a beautiful and well-designed campground. Each site is “carved out” of the surrounding greenery, so there is a lot of privacy. Sites are constructed on a crushed-shell base and are completely level. Anyone who has set up a tent on sticks, stones, leaves, and tree roots can appreciate how awesome this is. Showers and WCs are adequate, though not close to every site, and trash is collected at only one spot for over 100 spaces, which I did find a little odd. There is beach access and the park is less than 3 miles from Old Town St. Augustine. 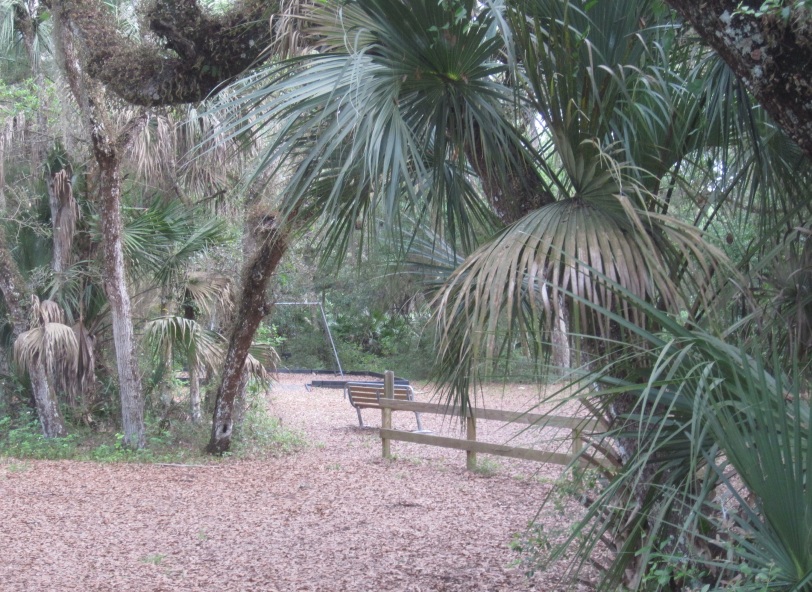 Monday was a planned touristic day. Dad volunteered to “puppy-sit,” so the three of us had more freedom than usual to choose our activities. A number of people had said that the trolley tours were worth doing to get an overview, so we decided to start with that. I chose the Old Town Trolley over the Red Trolley (owned by Ripley’s), but in the final analysis I don’t think there’s much difference. We drove over the Lion Bridge into town and to the Old Trolley Headquarters. This site contains a small museum, some shops, the “Oldest Store” and the “Old Jail.” We went to get our tickets and were stunned (appalled?) at the extra cost of almost every attraction along the trolley route. Despite the upsell attempts, we went with the basic ticket–no extras. 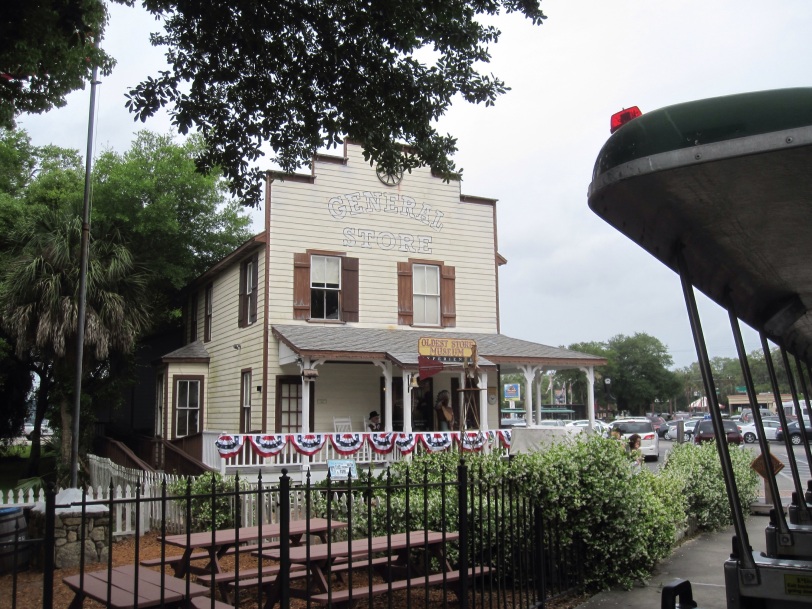 We passed the Old Drug Store, the City Gates, and the Old Wooden School House. Just outside the City Gates was the Huguenot Cemetery. It looks small, but actually contains far more remains than headstones, as a result of a Yellow Fever epidemic in 1821 during which multiple people were buried in each grave.

One of the highlights of the first half of the tour for me was Flagler College, the former Ponce de Leon Hotel. I would definitely like to tour the college if I ever make it back to St. Augustine. The hotel was built by Henry Flagler, who built his famous railroads primarily for the purpose of getting people to his hotels. Flagler made his primary fortune as a partner in Standard Oil, after several other ventures, including a salt business that went belly-up. Apparently he was a pretty ruthless competitor in the hotel business and acquired some of his prime land in St. Augustine by agreeing to build churches for the sellers (and some of the rest through less savory methods). We learned at a later stop that he was a lifelong teetotaler and left an early grain and distillery business because it “compromised his morals.” 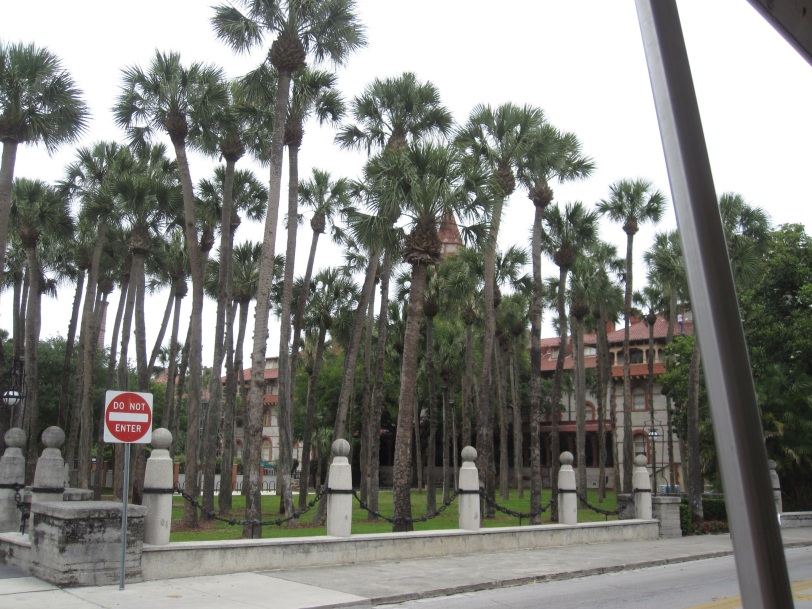 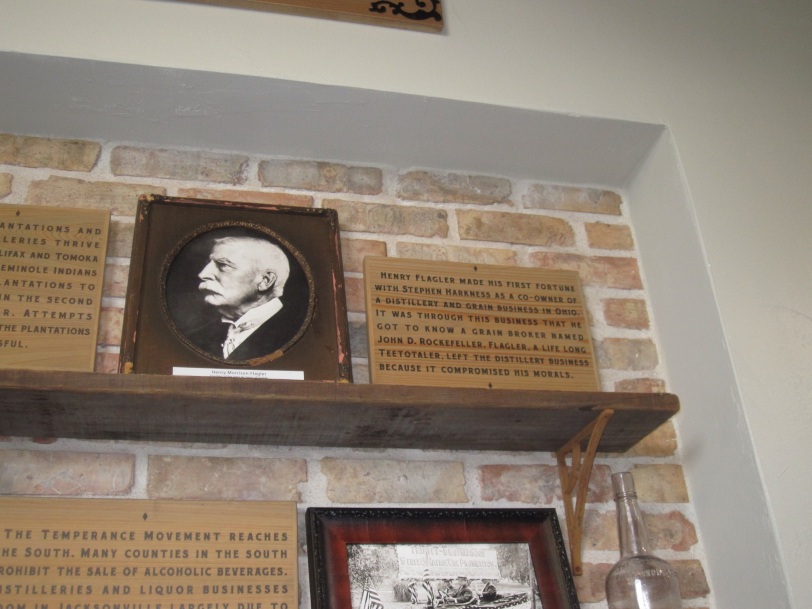 Speaking of distilleries, we decided to get off the trolley at the St. Augustine distillery, partly because we like distilleries and partly because their tour was free. Craft distilling is a new business in Florida, made possible by a 2013 law that allows direct sales from spirit producers to customers (with limits). Thus, only vodka and gin are currently available, since adequate aging time has not yet passed for the rum and bourbon they have distilled and barreled. St. Augustine is a larger craft distillery than the previously described Corsair, but is still relatively small compared to the big bourbon producers. Their stills are made by Vendome Copper and Brass Works in Kentucky and they are bigger than Corsair’s single still, but much smaller than the models used by Maker’s Mark. They appeared to have a still for each of the liquors they produce (vodka, gin, bourbon, and rum), so the extensive cleaning procedure used at Corsair would not be necessary. At the tasting room (always a highlight!) we enjoyed Florida mules and an updated gin and tonic. Both were good, but the mule was better. 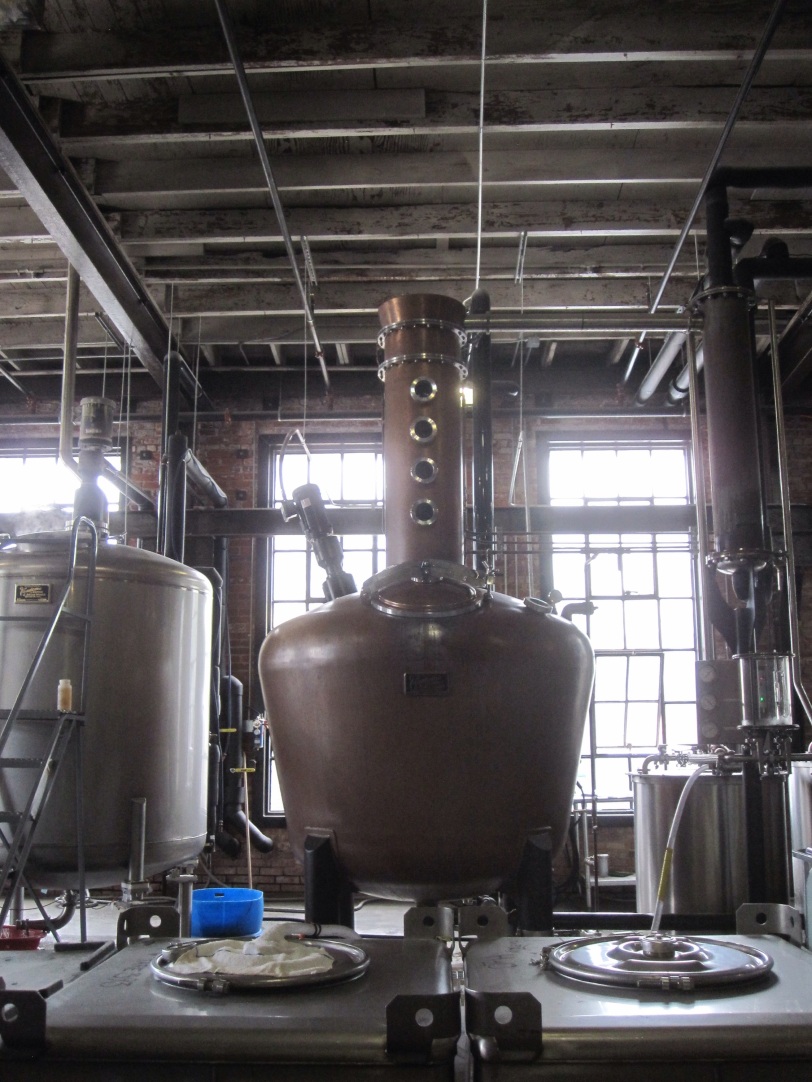 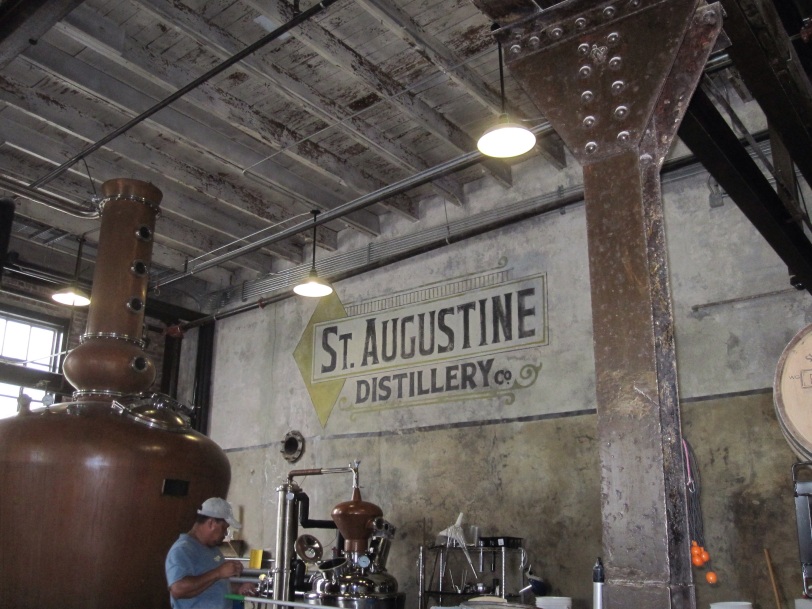 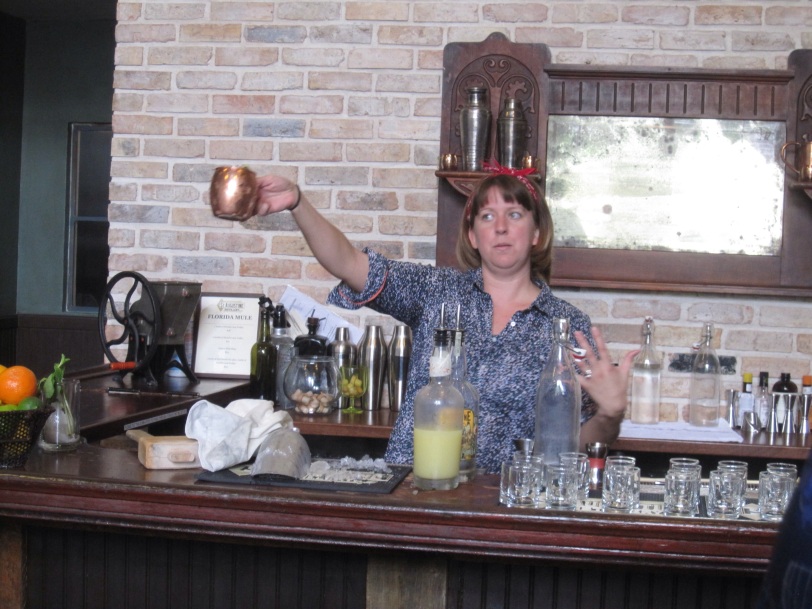 When we went to the bathroom (pictured) while we waited for the tour, we had noticed that the building also contained a restaurant. 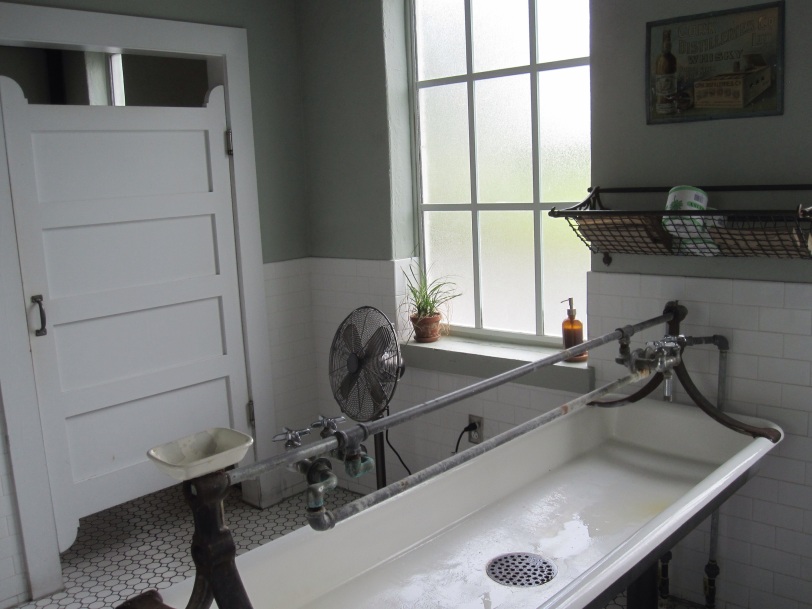 Note: the building is a former electric and ice plant that was recently purchased and converted. The tour concluded around 1 pm and we knew better than to look elsewhere for food. We settled in at the Ice Plant restaurant and enjoyed a lovely lunch. The quality and presentation of all the dishes were fantastic, from jalapeño hummus to an avocado sandwich to gazpacho and a tuna melt. 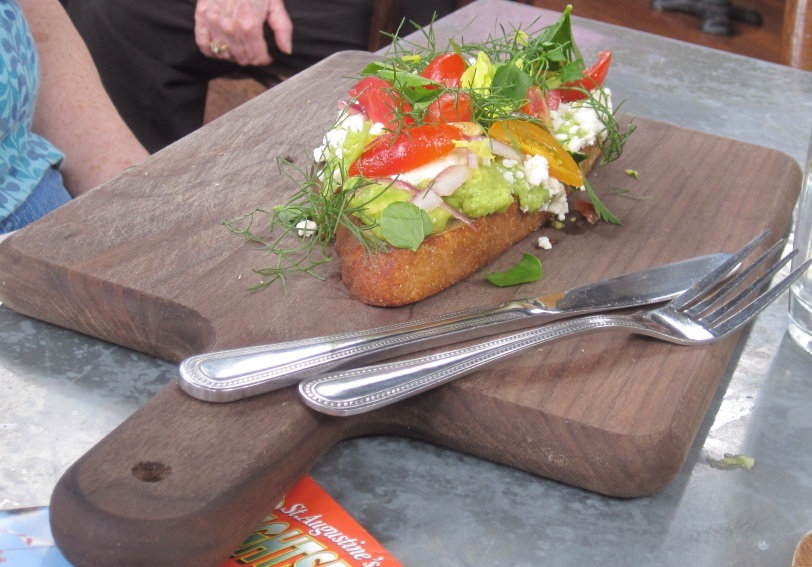 We didn’t need a drink after the tasting room, but they had some interesting choices on the menu (many using their own spirits) and a fine selection behind the bar (including Corsair products). The prices were quite reasonable for the setting and probably less than we would have paid for inferior food in the main tourist zone. 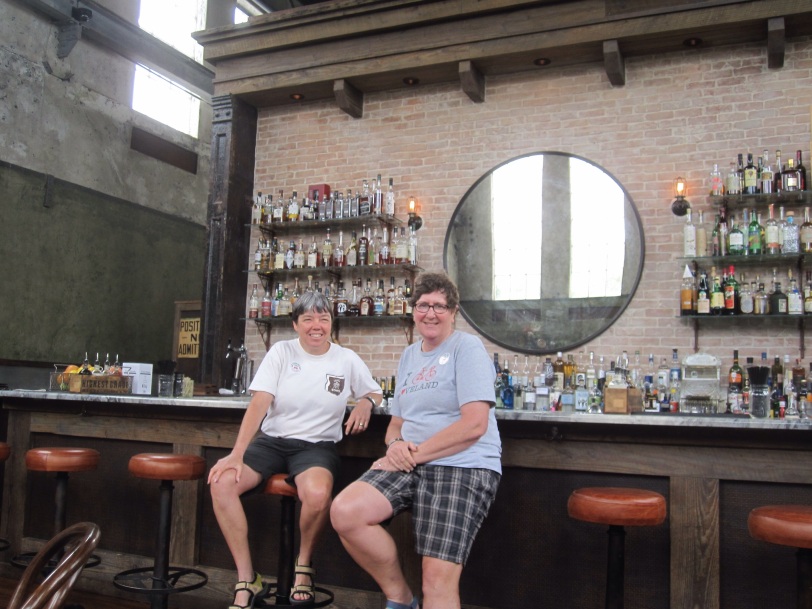 Sated, we decided to walk a couple blocks to our next destination,  Whetstone Chocolate Factory, instead of waiting for the trolley. We bought some (pricey!) chocolate, but opted not to spend another 55 minutes on our feet for the $8 tour and tasting. We just missed a trolley when we exited, so we sat and waited for the next one.

Back on board the trolley, I enjoyed our second guide much more than the first. We passed through much of the main historic area again after a side trip to the “Oldest House” and the St. Francis Barracks, a monastery that became a barracks. We drove by the harbor and then the fort, Castillo de San Marcos. We did not get off. We also drove into Ripley’s Believe It or Not, housed in a beautiful building that Mr. Ripley was unable to purchase in his lifetime (despite many attempts). It was later purchased by his family. 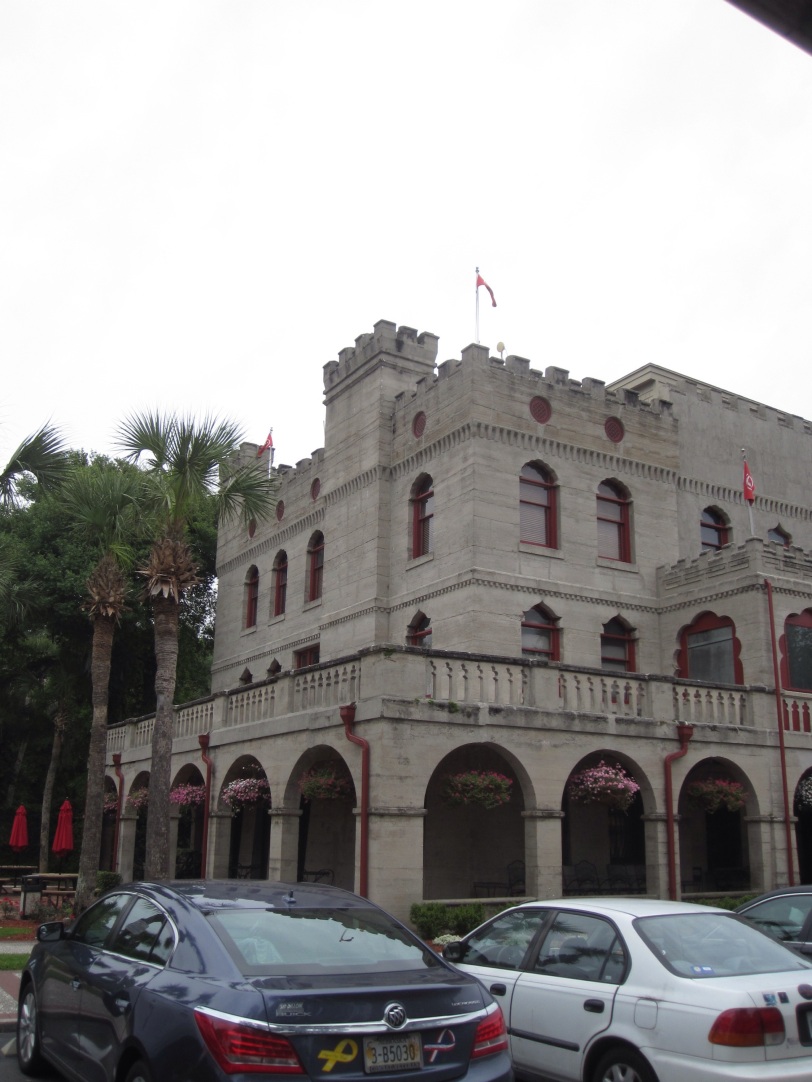 One of the final attractions was the Old Senator, a 600-year-old live oak tree in the Howard Johnson’s parking lot. 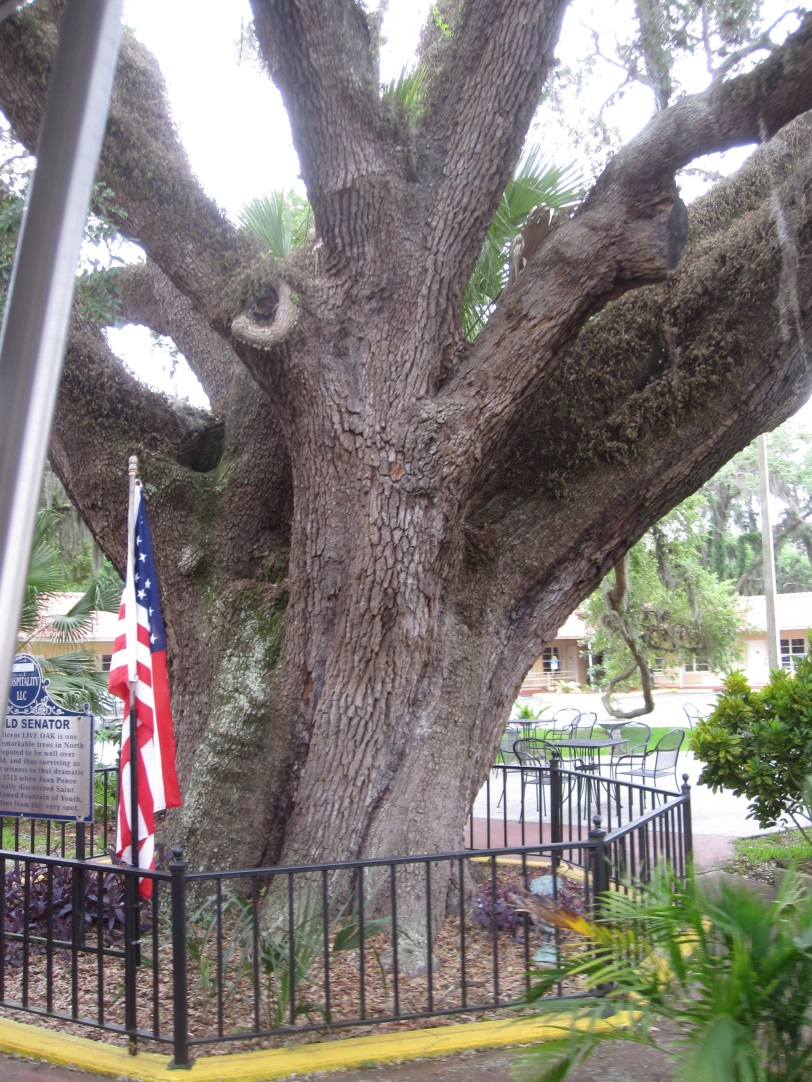 The “amusement park” that has grown up around the supposed Fountain of Youth discovered by Ponce de Leon was one of the last opportunities on the tour to spend some additional cash. We stayed on the trolley, but enjoyed the peacocks and the scenery.

On the way back “home” to our campsite, we checked out the beach at Anastasia State Park.

Later, we made an excursion for some fuel and fire (long lighters) and decided to make an ice cream run (which I’m sure is a surprise to those of you who know my father and me). Sadly, the recommended Cold Cow (and its food truck offspring, Cold Calf) is closed on Mondays. The next choice closed at 7, so we were out of luck there. We ended up making a run to Coneheads at St. Augustine Beach. It was good ice cream–I had Red Velvet–but not mind-blowing. A solid B, at least.

Back at camp, we prepared for our first riding day of this phase, though we were discouraged by the forecasted rain. Stay tuned…