The weather forecast didn’t look promising, so we were afraid that our scheduled riding start on Tuesday would be delayed. In the end, it was clear enough that we were able to ride almost 40 miles from St. Augustine towards Little Talbot Island. The first day of riding was along A1A again, Another section of which we had ridden on when we went from Key West to Fort Lauderdale in February. It was pretty busy, as far as automotive traffic goes, but I only pissed off one driver for daring to take the lane when my right of way was obstructed I think, so at least there’s that. The ride was next to the ocean in some places but mostly it was along roads with extremely large houses (really really large houses) that were obstructing the view of the sea (and the ostensible public access) for all but the 1% who live in the places, or at least own them and visit once in a while. Nearly every house seemed to have some sort of work going on, which Angie noted was probably because the ultra-wealthy owners had probably moved on from their winter home to another of their many abodes in Manhattan or Monaco or somewhere equally out of reach for most of us. She also observed that the number of contractors working at all these houses are the reason why most of us have a hellish time ever getting anyone to commit to our more modest home improvement projects.

We actually didn’t ride all the way to the campground at Little Talbot Island State Park, which had been our original plan. Part of the reason for this was that we were pretty much ready to be done riding by the time we got to the point where we quit for the day, but the main reason was that we turned onto a road that led to the ferry over to Little Talbot Island and there was no bike lane and no visibly safe way for us to negotiate it during rush hour. We pulled off the road to call Angie’s mom to come and pick us up, since she was only moments away by car, at the ferry terminal. While Angie was talking to Pat, a man pulled up in a car and asked if we needed help. I immediately saw his Road ID, so guessed he was a fellow cyclist, and in fact he is a bike tourist like us, and he’d ridden the southern tier (an Adventure Cycling Association route across the US) in both directions. He was very kind and did reassure us that the road we were on was indeed ridiculously dangerous for cyclists. He really wanted to be of help to us but we let him know that our ride was on the way. It turned out that by putting the bikes on the car and taking the ferry over to the island all together, we actually saved a few bucks, but the ride from the ferry to the campground was also along what proved to be inhospitable roads, so we were glad of our decision. Not to mention, we are not doing this trip to fight with cars but to have fun. When it stops being fun it’s ok to stop riding for a bit.

We checked in at Little Talbot Island State Park for a two-night stay. The place was running alive with mosquitoes but really pretty. The camping space was a good size and totally flat. The spaces so far are a marked improvement from the sites on which we had to pitch our tents in Mississippi. The bathroom was a pretty short walk through the brush, which is always a plus. 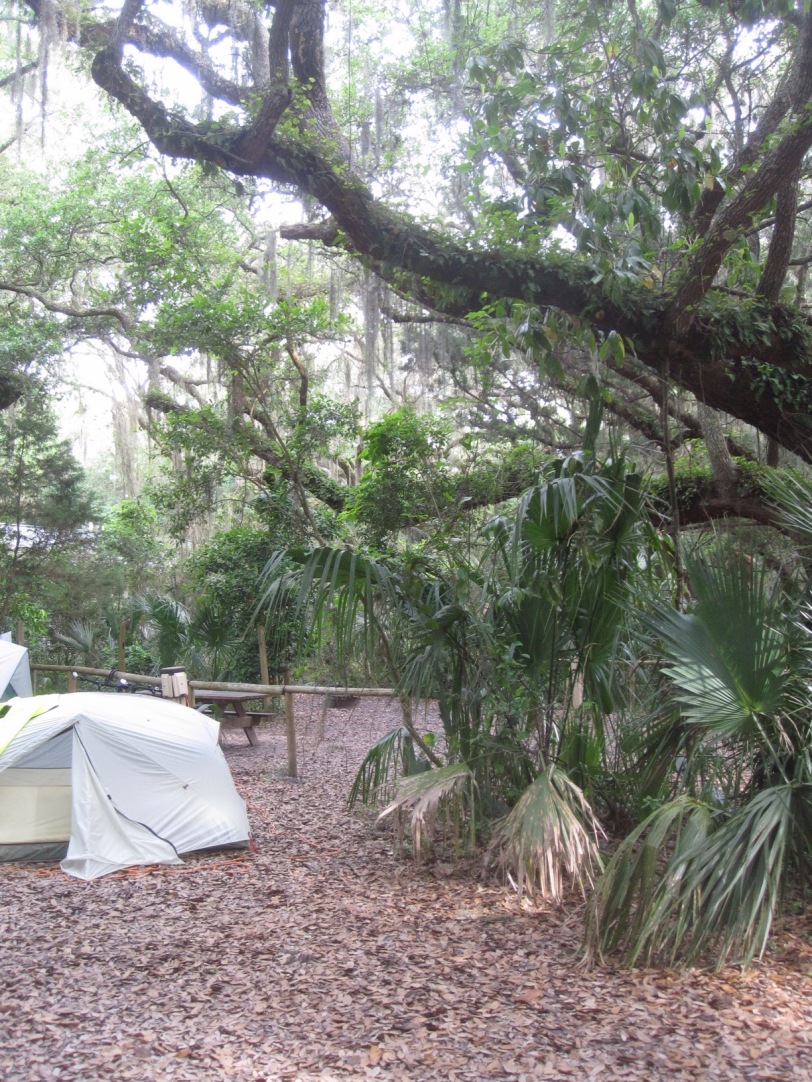 Once we got our camp set up, we ate the dinner that Pat had prepared while we were setting up tents etc. I know people say food tastes awesome when you are camping or after exercise, but the mac and cheese with tuna was really delicious.

However, after dinner there was no sitting around outside playing cards or anything because everyone was falling victim to the mosquitoes. Angie and I are using our three-person Big Agnes tent because we thought we’d need a lightweight tent for the bike camping we have yet to do. One downside of this is that if you are confined to your tent, this one is not the best since there’s nowhere to sit except in bed, which gets uncomfortable after a while. But, given how many bites I have on my body I would take what I can get for protection, and the tent does zip up pretty nicely making it hard for the critters to get in.

On Wednesday we decided to ride from the campground to Fernandina Beach. This was probably the loveliest riding we’ve done in Florida yet. The bulk of the ride, which was about 20 miles, was actually on dedicated bike paths. This included the old bridge that connects Talbot Island to historic Amelia Island, and the lovely Amelia Island Trail. Much of the ride was delightful and it was great to be out of the traffic for most of our ride. The old bridge is now dedicated as a fishing bridge and dedicated to George Crady, who was a local politician who campaigned to keep the old bridge intact after a new one was built. I think this was possibly the only old bridge in Florida that we encountered while riding that had the middle spans intact, rather than effectively being converted to two long piers that could cause significant frustration to a cyclist trying to avoid the trafficky automobile bridges. The approach to the bridge on the Talbot Island side was pretty amazing, since there was a small section of water and bushes that was home to a stunning population of water birds, including roseate spoonbills, storks, ibises, great blue herons, reddish egrets, great egrets and snowy egrets. All in one place! Quite amazing. Angie took some pictures when we drove past on our way out on Thursday, so she will be posting them on another blog post.

The bridge itself was a bit of a challenge since we had to cross it while fighting a hefty headwind, but it was worth it to be away from the traffic. Once we got to the other side, we took a break to eat something and learn a bit about George Crady. We also had a brief chat with a woman who was part of a group of local riders out on their regular Wednesday ride. Henry hope to gain some intelligence from her about where to find good chowder logically, but she wasn’t very helpful. He will keep hoping. 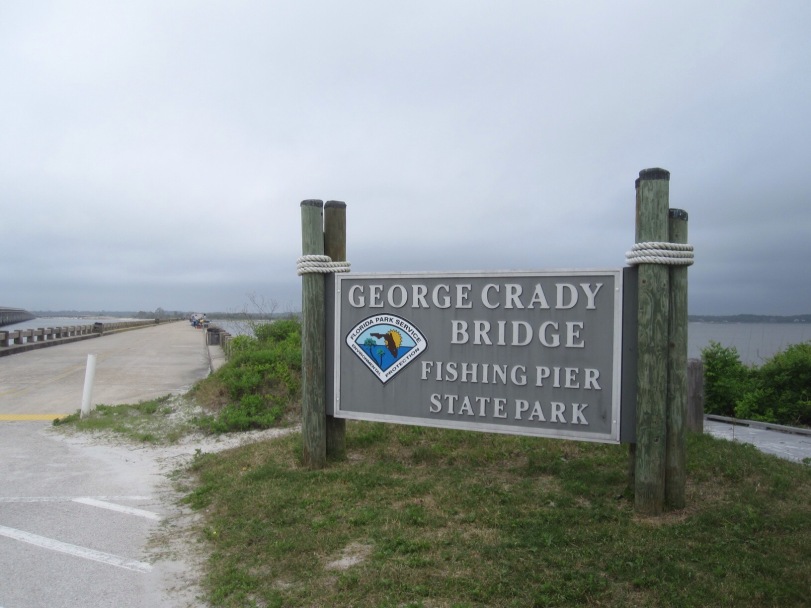 Once we got onto Amelia Island we were thrilled to find a protected bike lane that went quite a long way. In parts it was completely hidden from A1A while running right next to it.

The first part on the island took us past more opulence, but mainly behind long driveways that led to places with such inventive names as The Enclave and The Residences! The Amelia Island Plantation is home to an annual pro tennis tournament, but I never quite made the connection that it was here until I saw it on a park map.

We finished our ride at the glamorous location of aMcDonald’s so Angie could use their Wi-Fi to figure out logistics of the next few days, which was a handful because we couldn’t get a booking in Savannah, our next big destination, till Sunday night. She managed to sort out one night in a hotel in Waycross, Ga., And then two nights each at two different campgrounds, which should work out fine for us to see Savannah and still do a little cycling.

After that was all sorted, we went for a short walk on Fernandina Beach itself.. The Atlantic Ocean was in good form with pounding surf and Angie took the dogs into the water which they seemed to love. This was the first beach we’ve encountered in Florida where dogs have been permitted, on leash of course.

Walk on Fernandina Beach, which was lots of crashing waves, but the dogs went in the water and loved it. This is the only beach we’ve encountered in Florida that permits dogs (on leash). 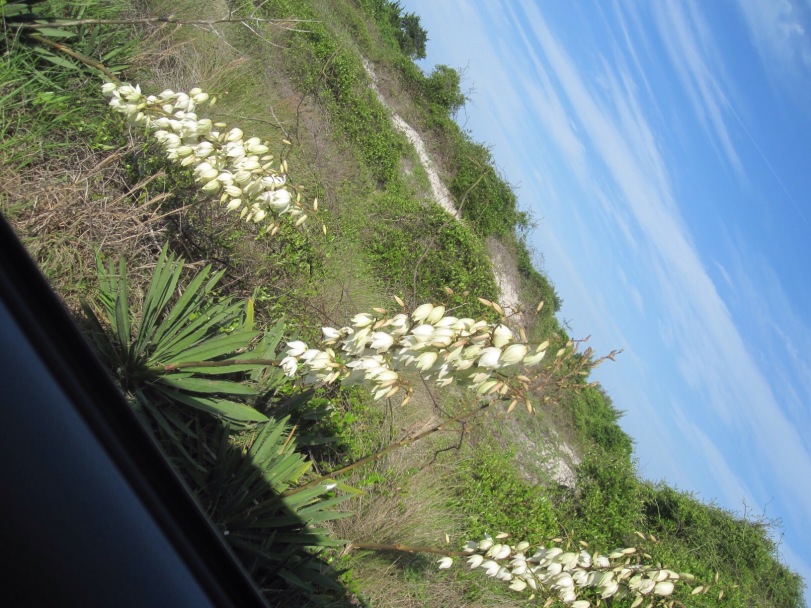 We had decided to have salmon fishcakes for dinner, so when we got back to our site, I set about preparing the fish mixture and Pat began on the other part of our meal, mashed potatoes. We rounded the meal out with a nice salad. Again, another really tasty campsite dinner.

But, once again, it was early to bed to avoid being bitten any more. I have been bitten extensively, particularly on my legs. I probably have 50 bites or more, so on Wednesday some additional treatment materials were acquired to try to soothe the itching and irritation. I’m also taking benadryl pills orally. The pharmacist recommended Claritin, but since we had the benadryl on hand, I’m using that. On Wednesday evening, a new arrival at the site next to us expressed surprise to someone she was talking to on the phone that everyone was in bed so early, and that in 30 years of camping she’d never seen everyone in bed so early, but clearly she’s not susceptible to mosquitoes like some of us.