A Hot Day in DC

Sunday (July 19) we had a slow start. Between packing up and just getting going, we reached our hotel–home for the next four days–late in the morning. We left our bags in a friend’s room, picked up said friend, and headed off to the National Building Museum. I was a bit shocked when we walked in–it was packed! I’ve been there many times and never seen anything like this. There were long lines stretching across the atrium. Fortunately, our weekend hostess (and dear friend) is a member, so she inquired and was directed to the member entry desk. It turns out that the line was for “The Beach,” a collection of plastic balls in which kids and grown-up kids can play. I admit I did not see the attraction–especially with a three-hour wait to get in! 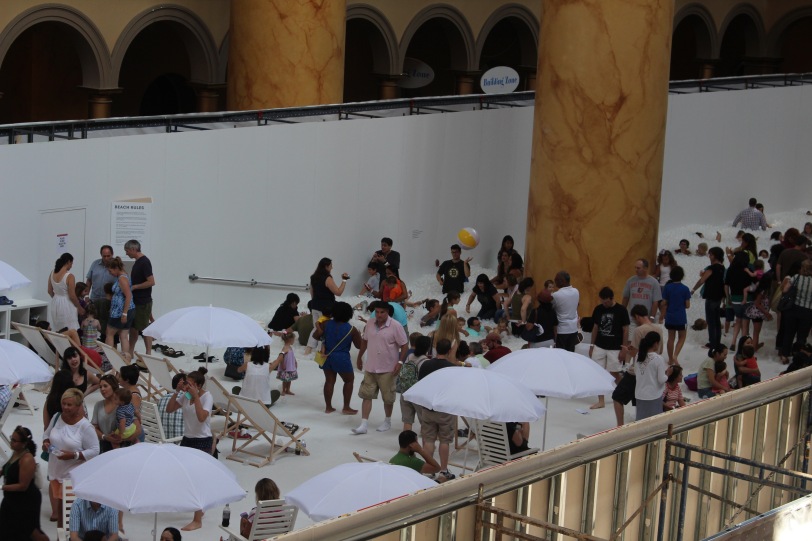 Armed with our admission bracelets, we headed up to the second floor to explore the exhibit HOT TO COLD: an odyssey of architectural adaptation. The exhibit consists of 60 3-D models depicting proposed building solutions around the world and one or two panels explaining each model/project.  As far as we could tell, none of these structures has been built to completion, but they are quite interesting and innovative.

We made it about halfway through before hunger got the better of us and we had to venture out into the furnace-like heat in search of lunch. Our hostess suggested ramen at the nearby Daikaya. We all agreed, but found a long line when we arrived. Fortunately, the sister restaurant Izakaya was serving brunch just upstairs. We enjoyed a Japanese-style variation on some typical brunch dishes (I had the “chicken and waffles”), as well as some lovely cucumber salad.

We returned to the Building Museum for another hour, including a visit to the excellent gift shop, before heading back to the hotel. We ran into my colleagues at the hotel, where they were meeting for an outing to see The Book of Mormon. We had opted out of this event, since we saw it last year in London. Later reports indicated that the DC production was quite good, impressing even some of those who had seen it elsewhere.

After checking in with the uber-friendly and helpful Courtyard by Marriott staff, we had a little time to rest (and iron) before heading out for dinner. Dinner, that is, at my favorite restaurant on the planet. We met back up with our weekend’s hostess for a 6:00 reservation at Zaytinya, José Andrés’ Mediterranean tapas establishment. (You may remember that Friday’s dinner was at Andrés’ Jaleo.) I started with a Turkish Storm–essentially a Dark & Stormy with cardamom syrup. Maureen asked for Tsipouro (ever hopeful) and they actually found some! Sadly, it was an anise-flavored version, so not exactly what she was hoping for. We were also enjoying the signature puffy bread with olive oil and pomegranate syrup as we decided on our tapas.

We went with fattoush, watermelon salad, mushroom pide, crispy Brussels, scallops, Bronzino, and pastirma (cured beef loin wrapped around radish and arugula). Everything was great, and the Bronzino was outstanding.

At dessert time, there was a question about cheese choice for our weekend hostess. Our waitress, Rachel, once again went above and beyond, polling her colleagues to get an answer for our friend. She went with the mild cheese that was accompanied by black walnut, and she was not disappointed. Maureen chose the Turkish Coffee Chocolate Cake, mezze size. I did not even consult the dessert menu, because I knew what I wanted–olive oil and walnut ice creams. They are served in a trio, so I did have to choose a third flavor (mango sorbet). It was as wonderful as I remembered it–something that is difficult to achieve. I know it sounds odd, but if you like tangy and creamy flavors together, olive oil ice cream is a revelation. 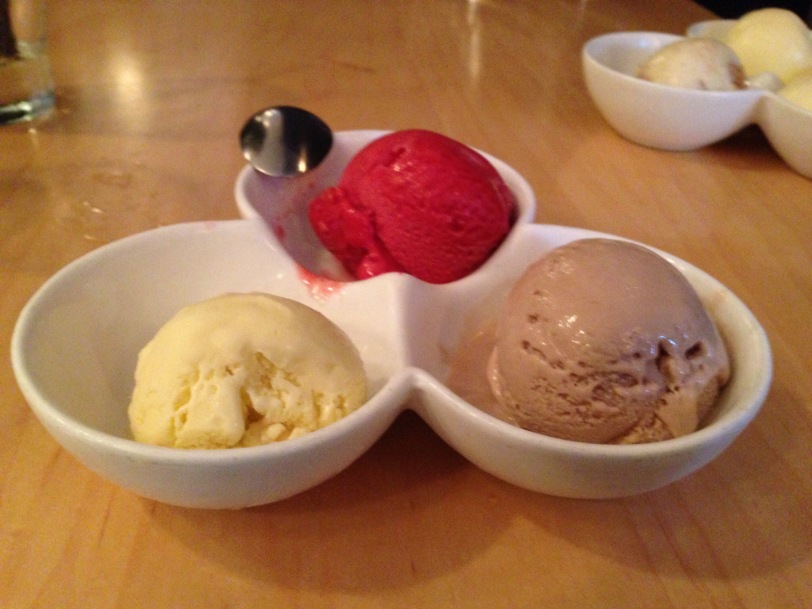 The walk back was more pleasant than the walk to Zaytinya, and we were able to relax and blog a bit after a wonderful dinner.

One thought on “A Hot Day in DC”