Wherever we’ve been on our travels this past year, I’ve tried to connect with people I know, whether it’s relatives, good friends, or people I just know from some aspect of my previous life, be it coworkers I’ve never met, or someone with whom I’ve had some quality contact even if we weren’t the best of friends. I don’t have a ton of friends in the D.C. area but I was able to hook up with a pal who used to live in Denver and had relocated here for work about a decade ago. She lives in northern Virginia, so I didn’t want to make her drive all the way into the city to meet me and deal with the traffic and parking. I also thought it would be good to get out of the city and also try my wings navigating the Metro, so we agreed to meet in Alexandria, a historic town that was where George Washington conducted some of his trade, and is also the birthplace of Robert E. Lee, the Confederate general.

We had a fantastic lunch at Brabo’s Tasting Room, which is located in the Lorien Hotel–one of the Kimpton properties along King Street–the main commercial hub. Brabo’s is Belgian-influenced, with four types of mussel preparations on offer, but we both had the tart, which is essentially pizza. They were very tasty though. I ordered the duck, and my friend had the mushroom, and we tried some of each others’ food and approved of both selections. The service was good; our server was knowledgeable but not intrusive, and we nattered away for an hour or so before my friend had to head out for an appointment. She kindly dropped me off at the waterfront, which meant I would not have to walk in both directions. A blessing, given that it was another hot and steamy day. 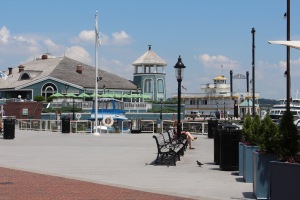 I took a few shots of the picturesque waterfront before going into the Torpedo Factory Arts Center to look around and cool down for a bit.

As its name indicates, the center had been a torpedo factory from about 1918 through World War II and it’s now been repurposed as an arts center, housing 82 artists in individual ateliers along with 7 galleries, two workshops, and an archeological museum. I’m not sure all the artists use them as work spaces, or whether some of them just sell there. There are also some Art League spaces, including classrooms and offices. I enjoyed looking at some of the works on sale and display, as well as the information about the torpedo factory that was also dotted around the space. 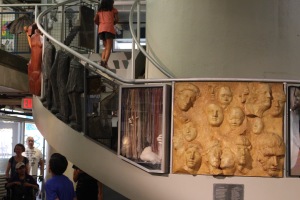 I left the art center and trekked the mile or so back to the station, confirming to myself that I had actually been to Alexandria before with my best friend when I visited her and her family a decade or so ago. (She now lives in Australia, so I didn’t get to see her on this trip.) King Street is the usual mix of historic and commercial/tourist, and it gets less interesting as you get closer to the station and further from the waterfront. If I’d had more time and energy, I would have liked to visit the Black History Museum. But I think the D.C. area will always be on our list of places to visit because there’s always so much to do here and so much one hasn’t seen or wants to see again. Given the heat, I could only take so much.

I was kindly invited to join Angie’s work crew for dinner on Monday evening. I’d met some of Angie’s comrades before but there were a few new faces, including some people she’s spoken about a lot, so I was thrilled to meet them. Lincoln is a small plates restaurant with a Lincoln theme for the decor, including a floor made up of pennies. I don’t know what the food would be if the theme carried through to that, but the food was good. I had or shared a shaved melon salad (mint, basil, kale, melon, balsamic marinated onions, but held the feta), a beet salad but again held the feta, and a flat iron steak with a leek and potato rosti and creamed kale. The beets were fantastic and a lot of the other vegetable components were very good. I honestly don’t remember if I had dessert. There were some interesting cocktails though Angie wasn’t impressed with hers, including how much you got for the money. I had a Stella Cidre which is pretty dependable. Among other things, Angie sampled the salmon tater tots (excellent), scallops as well as the beet salad and the melon salad too (all with the feta of course). She also had some of the ice creams for dessert but I passed. It was a good meal and I enjoyed getting to chat with some of Angie’s colleagues.

One thought on “Alexandria, Virginia”