We said goodbye to our beloved senior dog last week, and it was so hard to let her go, although it was clearly time.

I never had a dog until 2010 and hadn’t really been a dog person until recent years, when I started working from home and had come to appreciate the companionship of dogs.

I had begun the process to adopt a Havanese puppy just before Angie and I started dating. Angie already had an older, large dog and was a bit apprehensive about bringing another dog to the table. We discussed at length and agreed that since her dog, Shiloh, was female, she would probably do better with a male puppy.

To say everything worked out ok is an understatement. Shiloh apparently had always wanted her own puppy, and seemed to think that we had gotten Rebbe just for her. She totally taught Rebbe how to be a dog and they clearly loved each other, though they didn’t snuggle together much or anything like that. Except here:

They would play together a little, especially when they were excited about a walk. There was less playing as Shiloh got older but even toward the end of Shiloh’s life she would still get excited and show Rebbe who was boss.

Shiloh started having health problems about three years ago, including a knee repair and mast cell tumors. She was an aging dog by the time Angie and I left on our grand adventure, and we were not convinced she’d be around when we got back from Europe in November of 2014. Clearly her heart was not 100%, but she kept on going. We left Shiloh in Colorado as we did all our US traveling during our gap year, coming back and spending time with her between legs, and when we settled back in to life in Colorado, she definitely had slowed down.

Around November we discovered another mast cell tumor (her third of some size) and decided that not only would another surgery be too tough on our awesome dog, but we didn’t want to subject her to the recovery period (and the cone of shame!). It also meant it was likely she had other tumors that were not visible. We decided to take a palliative approach and just try to make her as comfortable as possible for whatever time she had left, using Benadryl and tramadol. And lots of treats.

In the past week or two we realized the end was near for our beloved dog. Her mobility was clearly compromised as the tumor in her hip grew and her legs and hips grew weaker. Her appetite was still fairly healthy but she was no longer really interested in her kibble, or even Rebbe’s, which she’d generally coveted. One evening last week, she even disdained her peanut-butter-filled Kong. She spent most of her days lying on the floor in the bedroom downstairs and would not come up or down the stairs unless at least one of us was there to spot her.

On Monday of this week, Shiloh refused a walk for the first time, and we knew for sure that it was time to let her go, and that she was in a lot of pain. Angie found a vet who would come to the house and help us let Shiloh go with all of us gathered around her.

I’m having a hard time finding the words to describe the experience. Of course it totally sucked. Angie and I were here of course, along with Rebbe, Angie’s ex-, and Angie’s brother Greg, who has taken care of Shiloh at times throughout her life and loved her very much.

We really appreciated the sensitivity of the vet. I know this is what she does, but the way she explained everything and handled Shiloh’s departure from life made it as bearable as one could hope for.

One of the most interesting aspects of the experience was something Angie noticed. During the process, Rebbe seemed to be checking in with each of us almost as if to comfort each of us. Rebbe has always been a very human-centered dog, so this kind of makes sense. He also went over to Shiloh several times. Angie had felt for days that Rebbe knew that Shiloh was dying, but once she was gone, Angie noticed that Rebbe completely lost interest in her, as if he knew she was dead. It’s so hard to ascribe feelings and knowledge to a dog, but this is how it seemed.

We have so many wonderful memories of Shiloh. She was an incredibly smart dog and was great about communicating her needs to us (something Rebbe seems to have learned too).  She made us laugh the way she’d plant herself in the middle of the kitchen under our feet when something tasty was cooking. 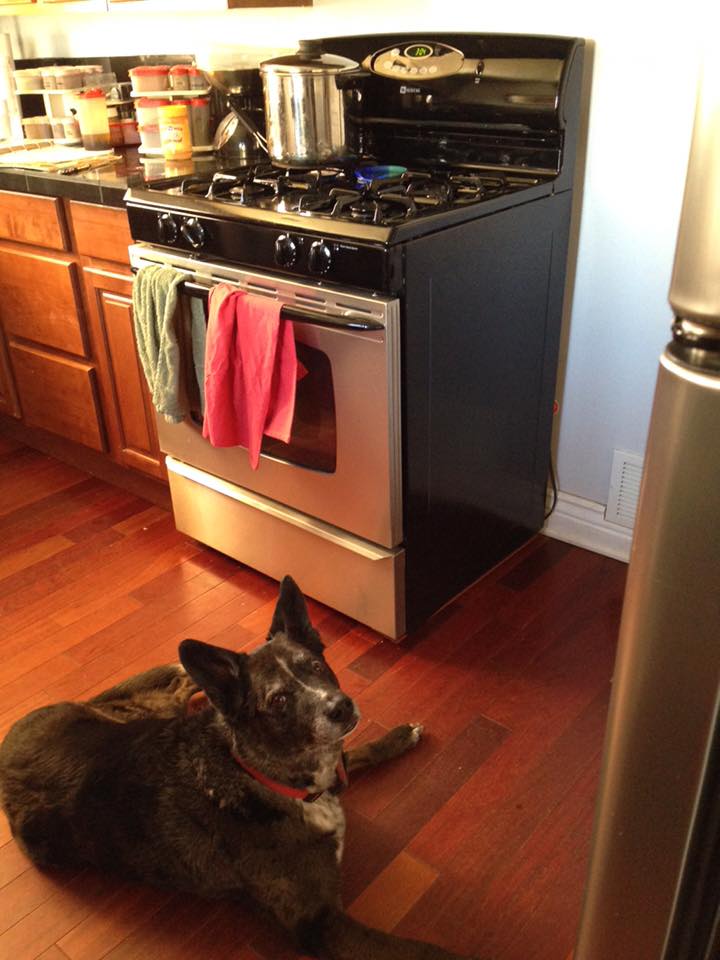 She wasn’t cuddly, but she clearly loved her people, and Rebbe, very much. She was also very attached to Angie’s ex- and her cat, who also died this year.

In the days since Shiloh died, we’ve found the house to be so quiet, and we’ve all really missed her presence. It’s odd to go into the bedroom and not find her lying on the floor by Angie’s side of the bed. Greg moved Rebbe’s bed into Shiloh’s spot in the living room but Rebbe has stayed close by either Angie or myself nearly the whole time. We think he feels her loss too. 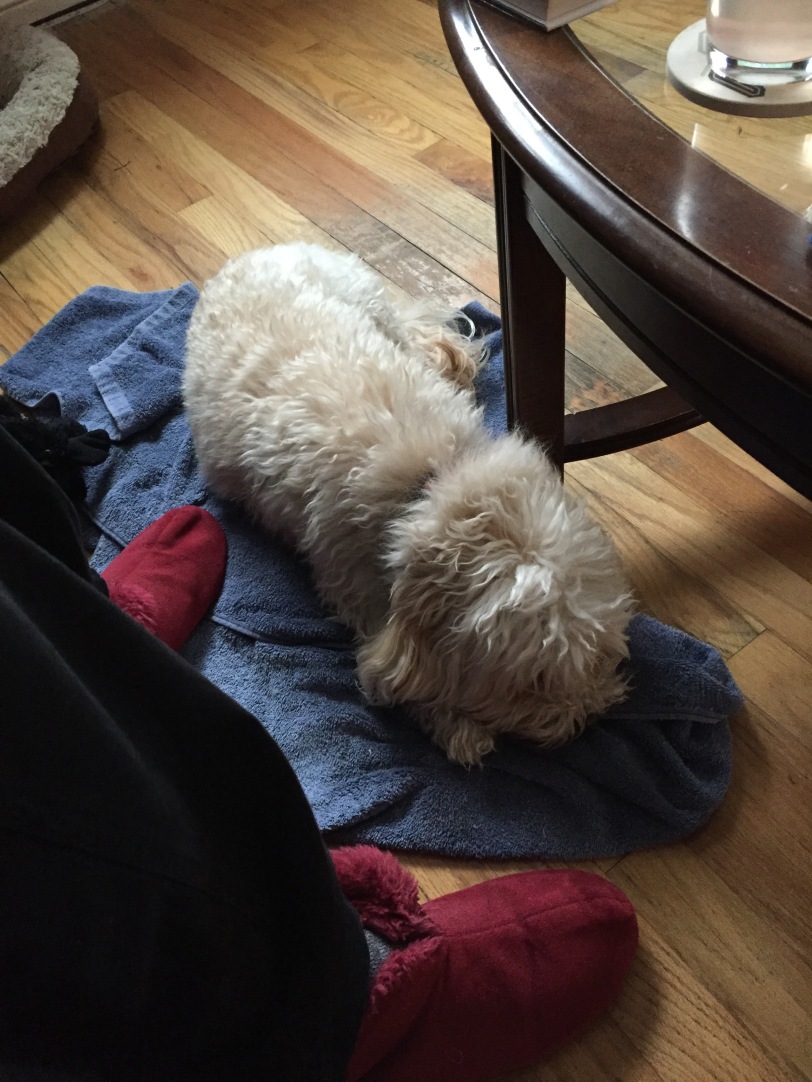 We’ve cleared out some of Shiloh’s things and moved them to the storage unit, but we’re not pretending she didn’t exist or touch our lives. We’ve talked about her a lot and all her funny and lovely quirks and tastes. When we first moved into the house we bought in Park Hill (Denver), she told Angie she needed a new bed by pulling pillows off the bed and putting them on the floor. She was such a smart girl. She loved potatoes and peas and tofu. She loved Angie better than anyone (I think) and after several months at Greg’s house, refused to go to bed at night without an animal cracker, because Greg spoiled her so much, and at the end we didn’t begrudge her anything.

Her presence is still with us, and I’m sure will be for quite some time. We are so sad she’s gone, but so grateful for the chance to have had her in our lives.

Angie’s postscript: Shiloh has been in my life since she was 8 weeks old. Here we are during that first week.

She was always her own dog–she knew who she was and what she did and didn’t want. She was a great companion to the people and animals with whom she cohabitated. She was a great teacher for Rebbe. We said goodbye to ease her pain and we knew it was coming, but there’s still a hole in your heart when a furry companion moves on. When that companion is super smart and full of personality and has been with you almost 15 years, it’s a pretty big hole. Goodbye, my friend.