Now that we’ve landed in Pueblo, we have a list of local attractions to check out, partly for business reasons and partly for our own edification. First on that list, mostly because we like birds of prey, was the Nature and Raptor Center of Pueblo. They have “Raptor Talks” every weekend morning at 11:30, so we decided to attend one this Saturday.

Though it was early March, the forecast promised over 70 degrees in the afternoon (spoiler–that didn’t happen), so we opted to ride our bikes. We took a route we had explored a couple weeks earlier. However, one of the underpasses on the route was fenced off for construction, which had not previously been the case. Unfortunately, there had been no signage warning of the closure, and no detour provided or readily available. Another rider came upon us and we found a way to get to the other side of the closure, but we’ll need to locate another route to the bike trail that leads to Lake Pueblo until the construction is finished. The part of the trail that we hadn’t ridden before was quite pleasant and well-used, even on this fairly chilly morning.

We reached the Nature Center around 11:15 and located a place to lock up our bikes. We went into the nearby building and asked about the talk. The people we encountered seemed a little confused, but eventually realized we meant the Raptor Talk and sent us across the parking lot to a trail up the hill. By the way, the Nature and Raptor Center charges a $4 parking fee, but entry is free if you don’t need to park a motor vehicle.

After our bonus mini-hike, we found the Raptor Center. It’s in a condemned building that visitors can’t enter. The bird enclosures are outside the building. The Raptor Center takes in injured birds and rehabilitates them, releasing those that can fly and hunt effectively after convalescing. 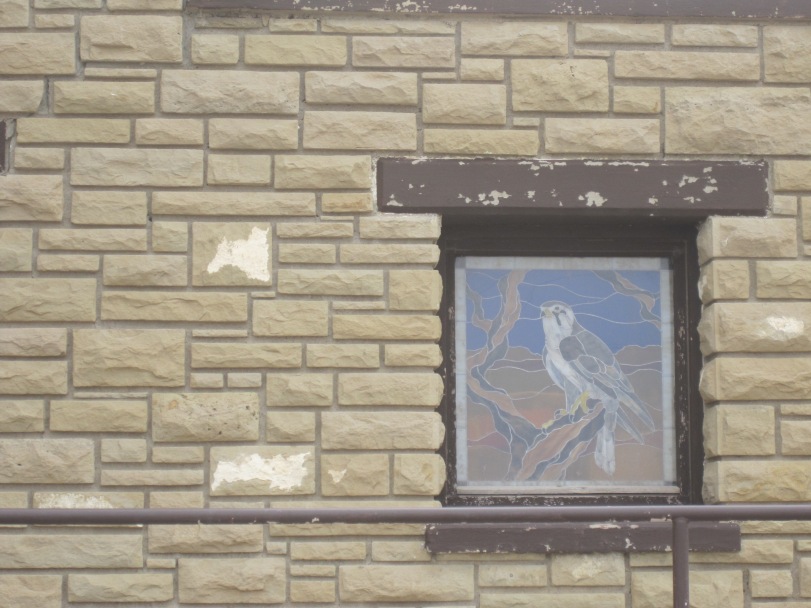 The talk was quite interesting and informative. The volunteer who gave the talk, Don, was accompanied by a great horned owl, Guffey. Guffey came to the center (from Guffey, Colorado) after a collision with something–maybe a car. His wing appeared to have been healed from an earlier injury, but not properly, leaving him with poor flying ability. Thus he could not be released even after rehabilitation following the collision.

Much of the talk focused on owls. I learned that all owls have facial disks that collect and funnel sound into their ears, which incidentally are not located where the ear tufts are. Owls can move their facial disks to hear accurately–quite helpful when hunting in the dark. They also have soft feathers at the front of their wings so that they can fly silently. On first consideration, one might think that this is to avoid being heard by prey, but it is actually so that the owl can continue to hear and locate its prey as it descends toward it.

I was already aware that owls could not move their eyes as we do, but must move their entire heads to look in a different direction. This is apparently an evolutionary compromise, as the lack of muscles to move the eye allows more room in the skull for large eyes. Large eyes are quite helpful in the low-light conditions in which owls hunt.

Our host also talked about the need for birds of prey to eat entire animals in order to get all the nutrients that they need, since they don’t eat vegetables, drink milk, or take vitamins 😀. This leads directly to the need for the Nature and Raptor Center to raise mice 🐭 and (ick!) rats 🐀 😬.

Another interesting tidbit from the talk was that young raptors go from hatchling to fully-developed in 3-4 weeks! For that reason, nutrition is incredibly important and many juvenile raptors who are separated from the nest do not survive. (In fact, at least 70% of birds of prey do not live through their first year.) If you should come across an injured raptor, baby or otherwise, contact your local raptor rehabilitation center. They know how to care for it and can give the bird its best shot at survival.

After the talk, we checked out the birds again. We were particularly interested to learn that the birds we had seen soaring the day before on our drive to Colorado Springs were probably peregrine falcons. They have a wing shape that is noticeably different from that of hawks. Because of one of their favorite meals, they were once inaccurately called duck hawks.

Here are some of the center’s other current residents.

After the talk, we walked part way up to the Southern Colorado Observatory (no signs or other info provided, I found the name on a facility map) and took a few photos. The day was not as warm or sunny as promised, but the views were still pretty nice. 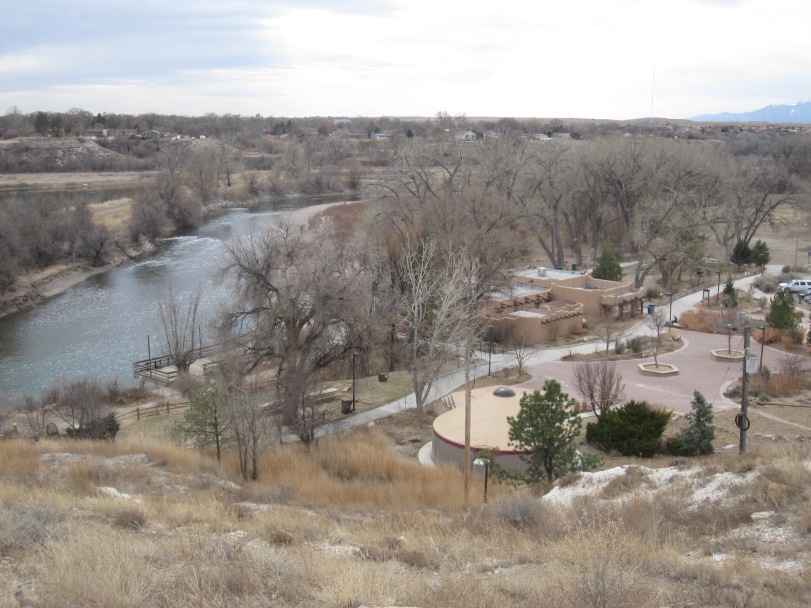 We retrieved our bicycles and headed back home, this time avoiding the construction zone and taking a path through Pueblo’s City Park and along the TransAmerica Bicycle Trail until we turned and headed north to our rental home. New experience, bike ride, exploring, all good.

One thought on “New Experience #20: Nature and Raptor Center of Pueblo”