I lived for two years in a place where I could see Mesa Verde if I ran (or biked or drove, or even skied) to the top of the hill two miles away. So going to Mesa Verde was not a new experience. 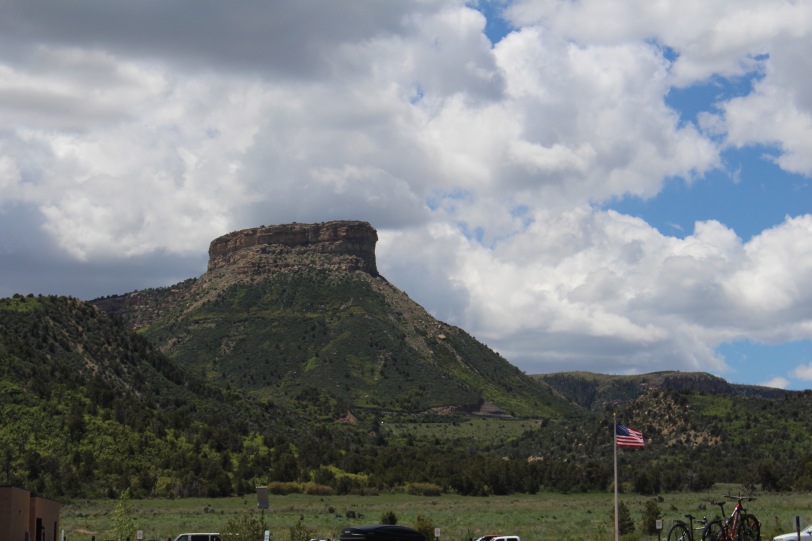 This time was quite different though. For one thing, I had never seen the Wetherill Mesa sites, which Maureen wrote about in her last post, because they were only open seasonally. This time, we took a bike ride on Wetherill Mesa, and I noticed a number of signs for “tram stops.” I was intrigued, but unable to locate any information about this tram–current or historical–in any of the park’s literature or books for sale. Once we got out of the park and back into reliable internet coverage, I learned that the demise of the tram happened just last year. For many years, a tram ferried visitors around Wetherill Mesa to Long House, Step House, and Badger House Community during the summer months and the area was only open to visitors from Memorial Day to Labor Day. Starting around 2010, the park experimented with hike and bike days in the fall (after the tram service ended for the season), which turned out to be quite popular. Then a combination of “contracting law” and this desire for more self-powered activities led to the tram route becoming a hiking/biking trail in 2015. We definitely approve–sightseeing by bicycle!

The other thing that I had not done in my visits to Mesa Verde was to take a ranger-guided tour. These tours are inexpensive (my guess is that the nominal $4/person fee is just to discourage no-shows, as it wouldn’t even pay for the ranger’s time, let alone the reservationists’), but require a ticket and ladder climbing. I’m not a big fan of “exposure,” so climbing ladders on a cliff face is not really on my list of fun things to do. But that’s how you get to the cliff dwellings, and it’s the year of doing new things, so… we signed up for the biggest ladder tour, Balcony House. Fortunately, the reservationist assured me that we would only be climbing up the ladder, not down (whew!).

So on Sunday we got up, enjoyed a little bird-watching (notably a Western tanager) from our balcony, ate our boiled eggs with bread and jam and hotel-room coffee, checked out, and headed for the cliffs. We were early enough that we got to hike to the Cliff Palace overlook on our way, encountering the same southern-accented ranger we’d seen the day before on Wetherill Mesa. 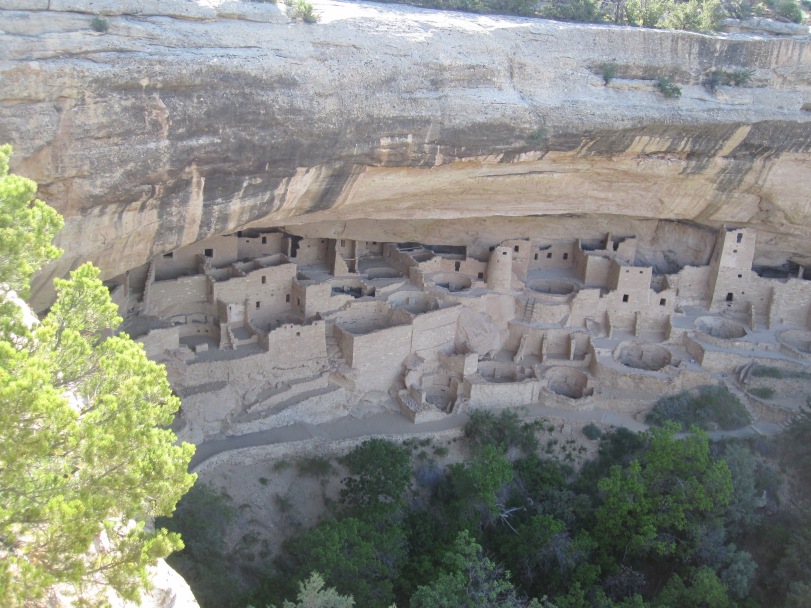 Then we drove to the Balcony House parking area, applied our sunscreen and waited. There were probably 40 people on our 9:30 tour. They run tours every half-hour, so that’s a lot of people per day. The first part of the tour involved walking down about 100 steps to the cliff dwelling approach. We encountered the ladder early in the tour. The ranger let us know that the ladder ascent was the point of no return–you could go back up the steps and out, but no one descends the ladder.
﻿

I climbed like a small child, both hands and both feet on each step, and I did not look at anything other than the ladder, but I made it successfully to the top. Once inside, Balcony House is pretty impressive. It’s the only cliff dwelling that’s been found at Mesa Verde that has a balcony

and a courtyard, where it is believed that recreation and celebrations (rather than everyday chores) took place.

After spending some time in the courtyard, we crawled through a narrow opening to the other section of the dwelling. I was wearing a CamelBak (to keep my hands free for climbing) and had to hunker down to pass through. This was much easier than the ladder.

The other part of Balcony House contained the familiar kivas and soot from cooking fires. 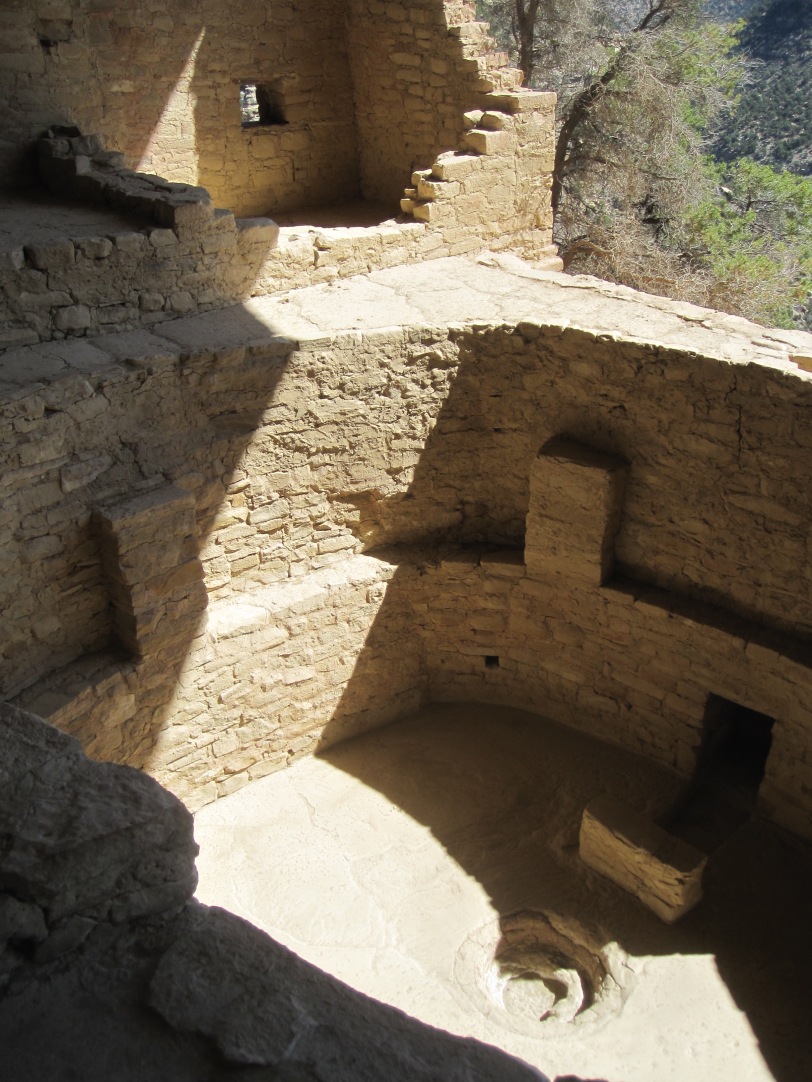 There was a protected, almost cave-like section of this dwelling, where it is hypothesized that ancestral Pueblo peoples took shelter from cold or otherwise inclement weather. Apparently, it was where they also kept turkeys, which I had not heard about on previous visits. In addition to being food, turkeys were a source of bones for tools and down and feathers for blankets.

The theory on kivas has also been updated. Previously thought to be used primarily for ceremonies, they are now thought to have functioned as protected, underground “living rooms.”

Much too soon, we had to climb out of Balcony House to let the next group in. Fortunately, the climb was protected by fences and employed chains that could be used to help in the ascent. It also included two short ladders that were much less intimidating than the initial ladder.

After the tour, we went in search of Navajo tacos, which I remembered from previous visits. I was disappointed in what we ultimately found at Far View Terrace Cafe, since you could not get beans without beef. We ate it anyway (with the beefy chili on the side for Maureen), but it left me wishing for an opportunity to visit Tocabe in Denver. Sadly, the concessionaire-ing of the National Parks is mostly to blame, just as in the restaurant the previous night. Much of the fare throughout the park was what you expect (and get) everywhere that corporate concessionaires are in charge. This article provides some timely context.

After leaving the park, I took Maureen to the previously-mentioned spot at the end of the road before we headed into Durango for the evening. A lovely dinner at Cyprus Café with old friends and a beautiful and challenging bike ride with a friend the next morning (before our long drive back to Pueblo) capped a delightful weekend away. 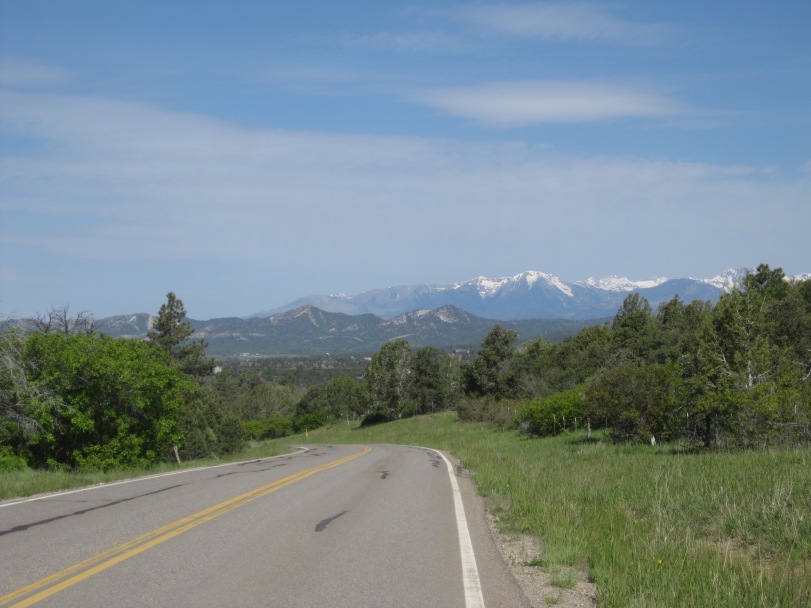