Mesa Verde National Park has been on my wish list at least since I moved to Colorado 20 years ago. Last weekend, that wish came true.

We decided that a long weekend (Memorial Day) was the perfect time to go, because it’s a long enough drive from Pueblo that you need to be able to spend at least one night there.

We stopped on Friday night in Monte Vista, about which Angie wrote, and then headed over Wolf Creek pass on Saturday for the grand adventure. We paused in Pagosa Springs to get a snack at Pagosa Baking Company, which is owned and successfully run by the sister of a friend, and then drove on to Mesa Verde.

The main sites of the park are located on two mesas, Chapin Mesa and Wetherill Mesa.

We had hoped to see one of the main tours that day on Wetherill Mesa at the Long House. However, upon arriving at the visitor center at Mesa Verde, we learned that all of Saturday’s tours were sold out. We immediately got on line to book a tour for Sunday. We selected the the Balcony House on Chapin Mesa after learning that Long House was also sold out for Sunday. We then established our plan of campaign for the day. Lunch, then spend the afternoon on Wetherill Mesa, since we would be on the other mesa the next day. There are several parts of the park on which bikes are not allowed, including the winding road that leads to this mesa, but we discovered that we could ride on that side of the park in several areas once we were on the mesa itself.

We wound our way into the park and stopped for a picnic at the Montezuma Valley Overlook, which was pretty gorgeous.

Angie and I have gotten pretty good at packing food so that we don’t have to buy or chase restaurant or concession food for every single meal when we travel. We keep a picnic box in the car too, with plates, salt, pepper, and so on.

After lunch we worked our way to Wetherill Mesa, which was a nice winding road, so Angie drove.

We parked and hiked to the Step House to get my first close look at the cliff dwellings that put this park on the map (Mesa Verde has been a national park since 1906, 10 years before the National Park Service itself was founded*). We hiked in, apparently the wrong way, but it got us where we were going.

There was a ranger on duty in the Step House, available to answer any questions we had, but we also had an interpretive booklet that helped us.

The Step House is the only house that has a self-guided tour and no required tickets. It’s called Step House because its inhabitants had indeed carved steps in to the rock for access. It included some of the pit houses that were similar to the structures found on the mesas too. The black patches in the photo below are from the fires the Pueblo peoples used for cooking and heat.

These are not the original stpes

In the course of the weekend I learned a lot about this fascinating place, including that the cliff dwellings were only inhabited for about 100-200 years by the Ancestral Pueblo people and even then, only by a minority of the people. For most of the time they lived in the area, the Ancestral Pueblo people lived and farmed on the mesas above the cliff dwellings.

After checking out the Step House, we took our bikes out for a five or six mile ride around some of the sites on the mesa. We stopped every so often to hike down to a vista point or check out a complex, including the Badger House Community, though we soon discovered that we could take our bikes on many of the paths also. We achieved about 500 feet of climbing in 6 miles, which at 7,000 feet plus above sea level made us feel quite accomplished! We really enjoyed the experience. 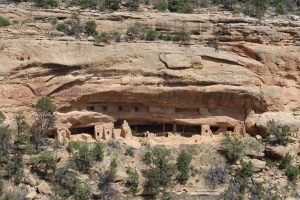 Another of the cliff dwellings along Wetherill Mesa

We finished our tour of Wetherill Mesa and drove down to the Far View area, where we were going to spend the night at the Far View Lodge so that we didn’t have to drive all the way in and out of the park for the next day’s exploration. The lodge is pretty cool because most of the rooms have a view of the mesas to the south of the area.

We had dinner at the Metate Room restaurant at the lodge that night. It’s one of those “Fine dining” places at a national park that is run by a concessionaire, so isn’t as fine as the restaurant would like to say it is. We had a reasonable meal but the service was mediocre. However, as Angie noted, it’s probably hard to get good servers when the work is only seasonal. There was one staff member that I found really interesting to watch. He clearly took his work very seriously and presented himself really professionally. I did also enjoy observing all the guests in the restaurant and the interactions of the wait staff.

My first day at Mesa Verde was great, and I was really looking forward to our tour and the rest of our visit on Sunday.

*My research (and the information we garnered during our visit to Yellowstone, which was the first national park, created in 1872) tells me that there were different administrations of the national parks up until the creation of the National Park Service, including the Interior Department and the military. However, until the park service was created, it was very difficult to manage the parks and to prevent looting.  Mesa Verde  and similar places in the southwest, were actually the impetus behind the passage of the Antiquities Act of 1906. According to one article I read, one quarter of National Park Service properties became a part of the system as a result of that legislation.