I had twice before (since we moved to Pueblo) considered going to Monte Vista to try to see the Sandhill cranes as they passed through the San Luis Valley on their migration. For one reason or another, though, I hadn’t managed to make it happen. So this year I did a little investigating and found that the Monte Vista Crane Festival would be March 10-12. However, we already had plans to be in Denver that weekend and I am not particularly fond of crowds. So, given that the weather has been very warm for February, I thought we might be able to see the cranes in advance of the festival.

The cranes generally move from their roosting sites to feeding areas around sunrise, so I wanted to try to see them quite early. Sunrise at this time of the year is about 6:45 and we live about 2.5 hours from Monte Vista. The hard-core early risers might be able to make this journey in the morning, but I did not think it would lead to an enjoyable day. Instead, we booked a room at the Best Western Movie Manor (read about our earlier visit here), which doesn’t have movies in February, but is competitively-priced, near the Monte Vista National Wildlife Refuge, and provides breakfast.

We got off to a rocky start. Maureen had acquired the requisite picnic food and we had packed earlier in the day, but she had tweaked her knee cleaning the oven (our rental house does not have a self-cleaning oven, sadly, and we bake and roast on a regular basis). Thus, I did most of the car-packing when I got home from work. And realized–luckily while still in town–that we didn’t pack the camera. There was no question whether we would go back for it, and the delay was fortunately only about 15 minutes. We left Pueblo under fairly clear skies and had smooth sailing until we were west of Walsenburg. Then there was snow–and it was coming right at us. Visibility decreased rapidly and we considered turning around, even pulling off at one point to assess and discuss. We decided to continue, and proceeded very slowly over La Veta Pass. The roadside reflector posts were barely adequate for identifying the edge of the road, but we made it over and down safely. The snow stopped, and the sky was clear. Very clear. The stars were amazing. At that point, we opened the moonroof cover (the 18 degree temps did not encourage opening the moonroof itself) and decided the trip was already worth it for that view of the starry night.

Dinner, in our hotel room, was a little later than we would have liked, but satisfying. Chester’s Fried Chicken may not be the healthiest meal on the planet, but it is very reliable road-trip food for us. Paired with some mustard potato salad (coleslaw works too) and washed down with lemonade (and perhaps a splash of Colorado whiskey 😉) it is a simple way to avoid finding a restaurant when you’re already getting hangry.

After dinner, we set the alarm for o-dark-thirty and settled in to sleep. The hotel offers breakfast starting at 6, so our goal was to be packed up and in the breakfast room at that time. And indeed, we were first in line at the waffle maker. BWMM also provides eggs and sausage and a good variety of fruit and pastries. We supplemented our waffles with a protein source and coffee and headed out to see the birds in 6 degree weather (yes, Fahrenheit).

Fortunately, seeing the birds was mostly a driving adventure. We headed through Monte Vista to the turnoff for the National Wildlife Refuge and down Route 15 to the headquarters, which was of course closed. They do leave literature outside for guests, so we took a couple of brochures. (You can access the map and viewing brochure here.) They also have a new-looking “forest-service style” bathroom, which I was glad I did not need to use (see 6 degree reference above). A bit further down the road, we noticed a car stopped on the side of the road pointing in the wrong direction. They were observing a big group of cranes! We stopped briefly to get our first crane photos of the day. 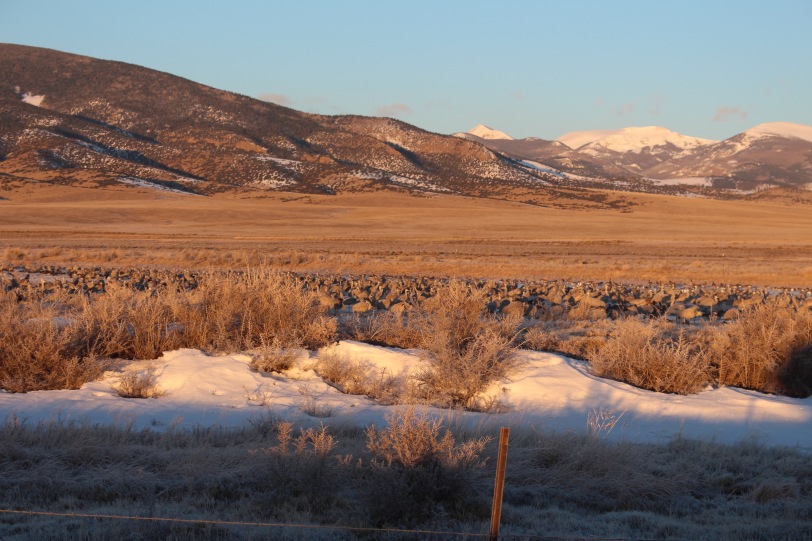 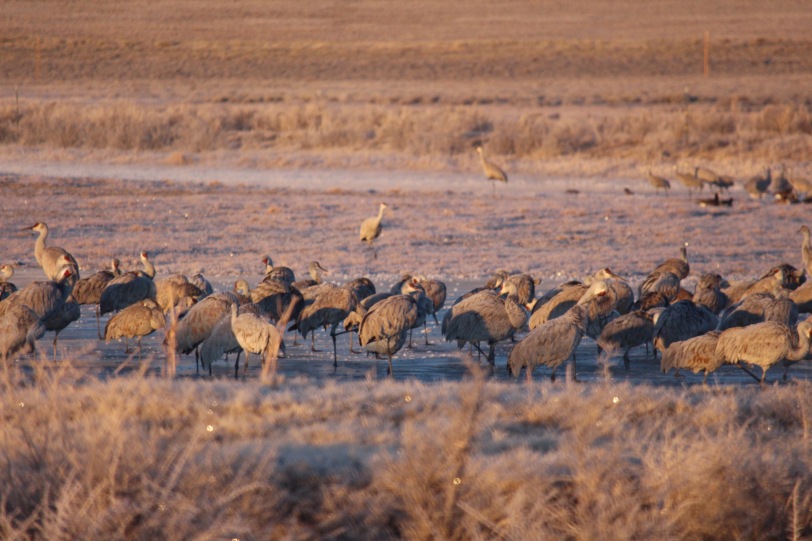 Side note: Apparently a group of cranes can be called a herd or a sedge/sege/siege, where the latter term and variants refer to the rush-like grasses in the marshes where the cranes nest. We observed this sedge of cranes from a nearby pullout and then moved to one across the road where there were just a few cranes in a field. During this time, cranes were flying overhead, usually in small groups, presumably moving to their feeding areas. 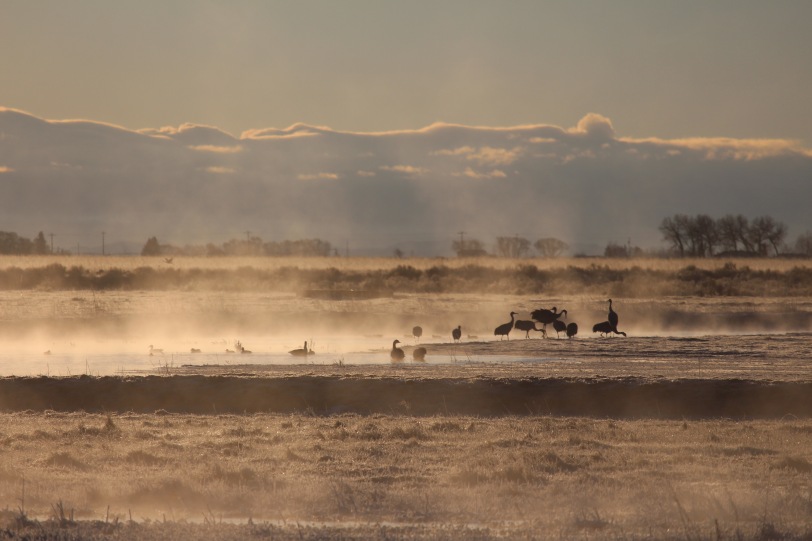 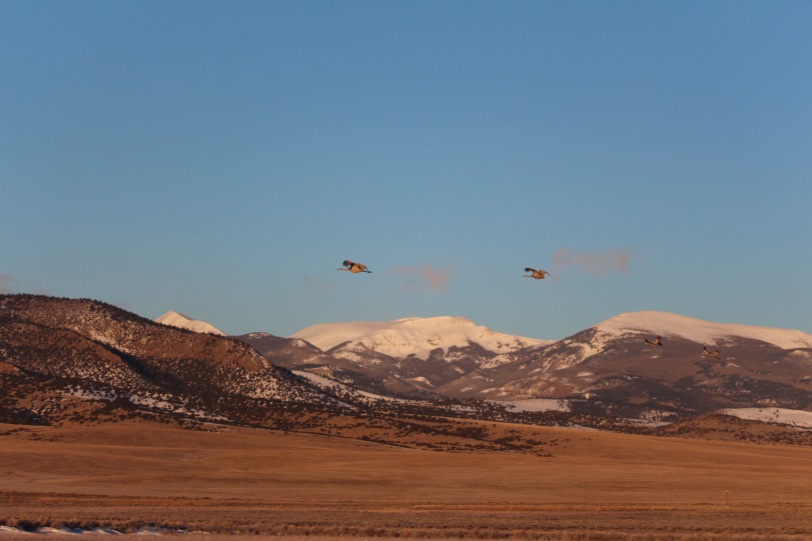 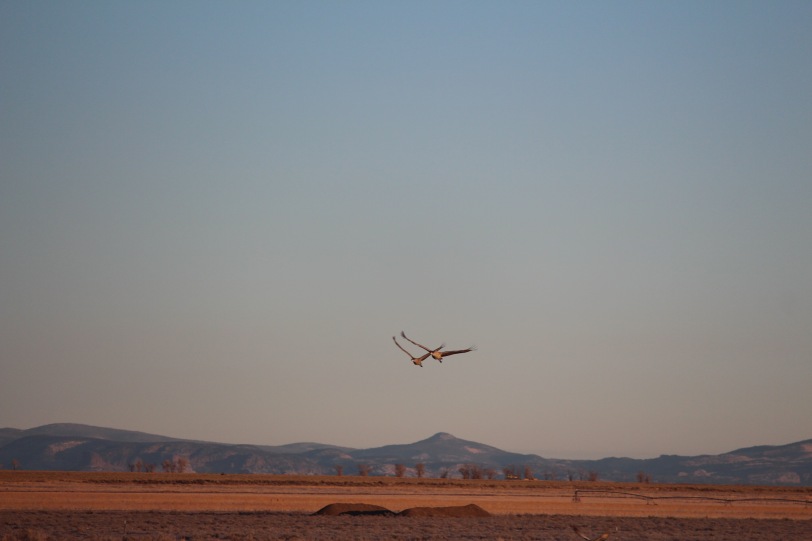 The next viewing area was around the corner on County Road 8S. When we got out here, we noticed some large mammals skittering away (I know, do large mammals skitter?). The binoculars revealed a gang (herd is also used, but I like gang better) of elk. Quite an unexpected treat. There were cranes too, of course, so more photos were taken. 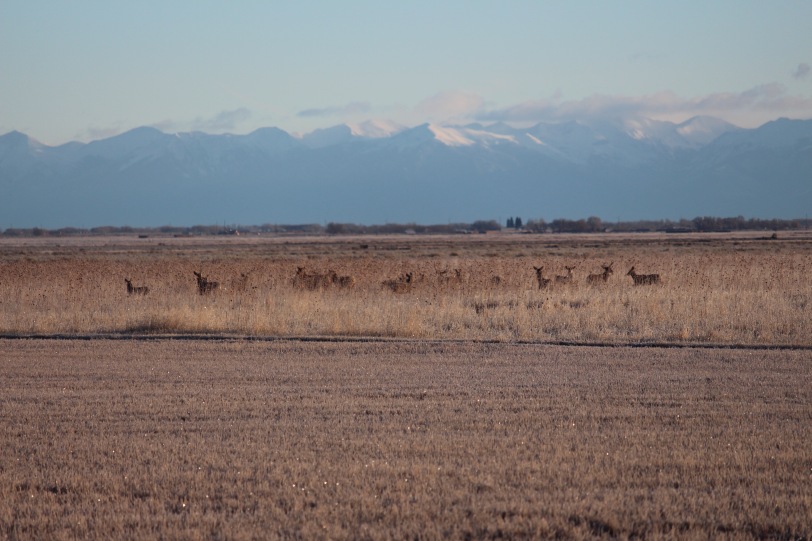 We decided to check out the far reaches of this NWR, which was a few miles down 8S. The roads started to get bumpier in this section. There was a driving loop, so we drove it. We mostly enjoyed the vistas, but towards the end spotted a raptor in a tree. When it flew off, we were able to see just how enormous it was. As the ranger we met at Lathrop State Park later that day noted, if your thought is that’s the biggest darn bird I’ve ever seen, it’s almost certainly a golden eagle. Another treat for this day.

It was still quite early, so we decided to revisit the first few pullouts and drive the scenic loop near the headquarters. We did so, enjoying the frozen scenery. 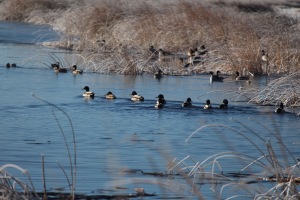 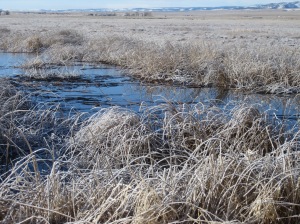 We were ready to head for the Alamosa NWR, but I was really unexcited about the prospect of going there on Highway 160, so I looked at the map and determined that we could get the on County Road 8S. Along the way, we stopped at the pullout on the corner of Route 15 and 8S again. We took a few more photos of the cranes and elk, then started to pull away. As we did, we noticed a great cacophony. I stopped the car and got out to see hundreds of cranes flying overhead! Wow. This was what we’d come to see. 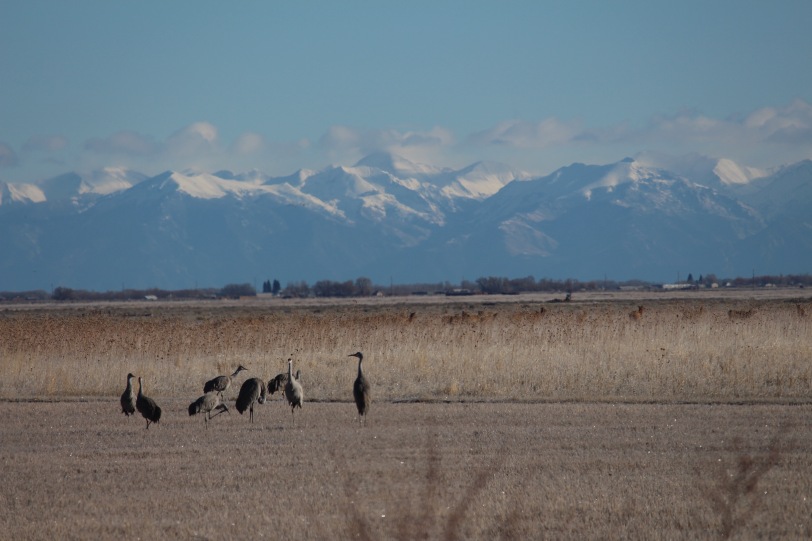 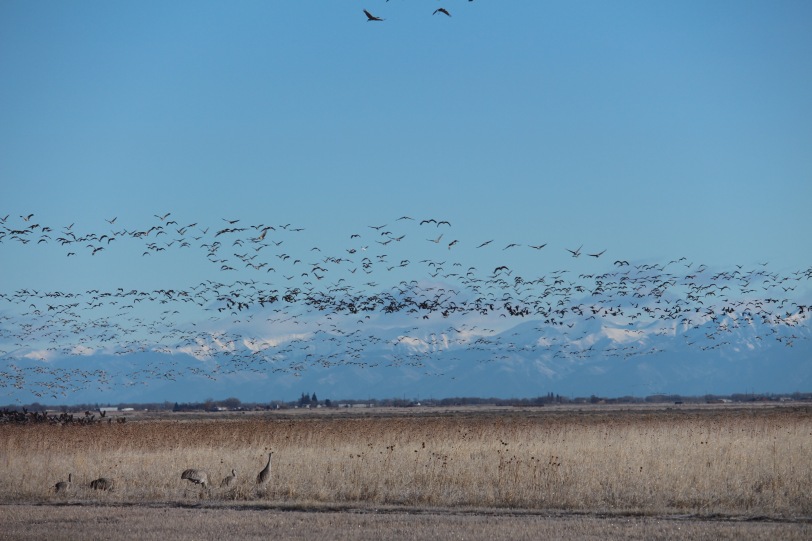 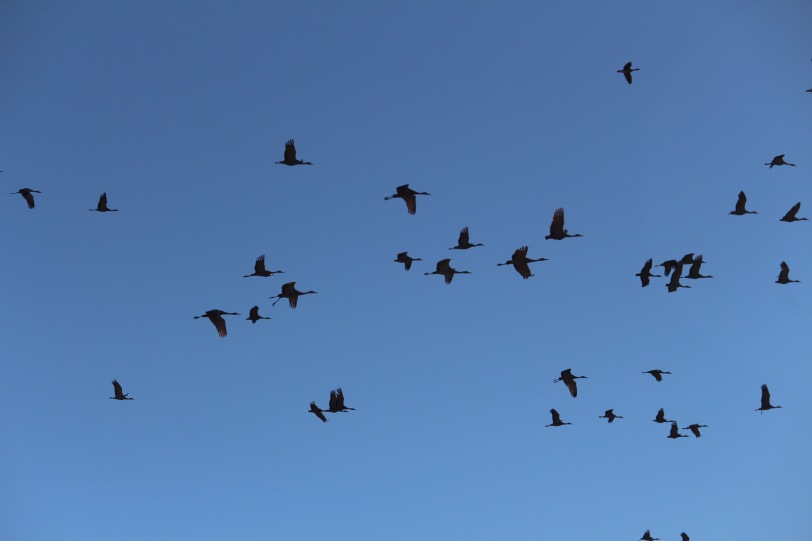 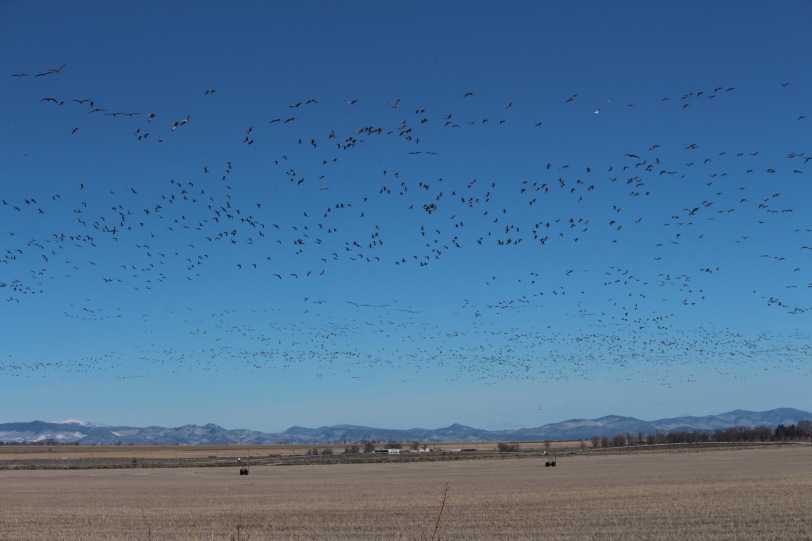 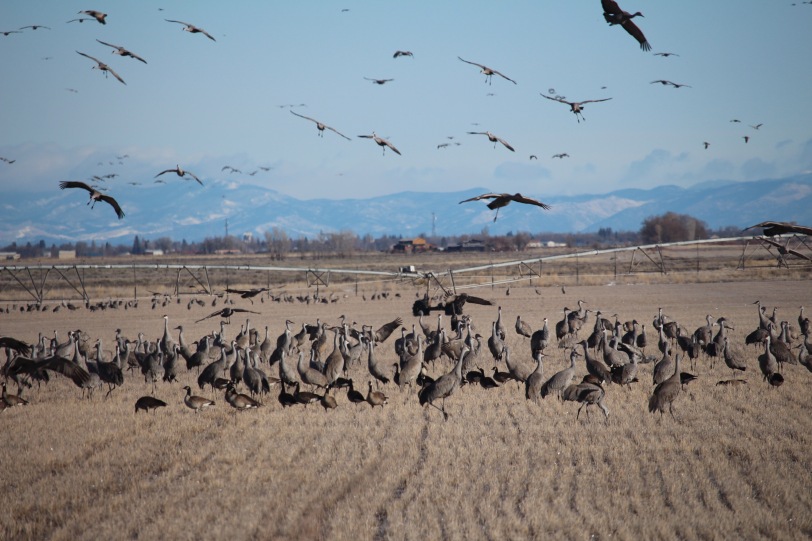