If you drive along Hwy. 160 in southern Colorado, you may notice an unusual lodging establishment in Monte Vista. The Best Western Movie Manor is part motel, part drive-in. I had often thought about staying there, but the opportunity had not presented itself. I knew we could not make it all the way to Mesa Verde last Friday night after work, so after waffling a bit about leaving Saturday morning, we decided to stop at Movie Manor instead.

There aren’t too many places to stop on the way there, so we pulled over to a scenic overlook to eat our King Soopers fried chicken and cole slaw (a road trip staple). While there, we were lucky to spot a long-tailed weasel carrying its (large) dinner across the parking lot!

We arrived at Movie Manor and were told we could watch X-Men: Apocalypse from our room or drive in to the Angry Birds side of the theater. We could actually see both screens from our room, but the built-in sound system does not allow for movie choice. We “watched” X-Men for the experience, but I have to admit it was hard to keep my attention focused on a screen so far away without the context of the earlier movies in the series.

The lodge has a number of other movie-related features–like the decor:

And the room names (we didn’t even notice this until we came back from breakfast the next morning): 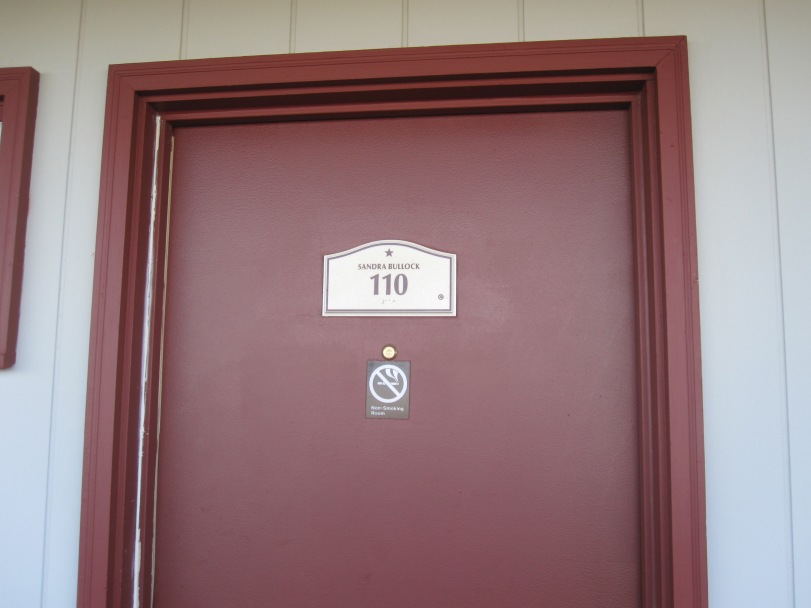 On the more practical side, the room was small, but the bed was comfy, quite likely the best of the weekend. The complimentary breakfast was also quite good. I wouldn’t go out of my way to stay there again, but it’s a good stop if it’s on your way. For us, it made the next day much better, as you’ll read in Maureen’s upcoming blog.