We woke hoping the train had made up some time overnight. It had not. We were somewhat farther behind than we had been when we went to sleep. Sleep was OK, but the first night in a new setting is always tough. We woke early, and decided to just head for the dining car at its previously indicated opening time of 6:30. There are no announcements on the train before 7 a.m., so getting to the dining car prior to this pretty much ensures there will be no waiting.

We were seated with a man who is in the process of moving to North Carolina, but has lived many places in the U.S. I had the cheese quesadillas, and Maureen went with the scrambled eggs. Coffee was good and refillable, and juice was included for sleeping car passengers too. Also included, high quality packaged guacamole. Yum.

We checked out the observation/lounge car after breakfast. I found it to be a little undersized for the number of passengers this train ultimately carried (we had not yet picked up a large contingent waiting near Glacier National Park) but the high windows and outward-facing seats were nice. We caught up with Brad and Corrine and the kids later, and spent some time coloring, stickering, and watching the scenery go by, sometimes. Because we were late leaving Seattle, our schedule for passing/giving way to freight trains was off, and we spent large chunks of this day waiting for freight trains to pass us (in both directions). Fortunately, we no longer had a train connection to make.

Lunch was the weakest meal on the train. As you can see from the menu, the options were “all-American” fare. I had the Veggie Burger the first day and paid for it later. And Amtrak is a Pepsi outfit. With no Dr. Pepper (right, what the heck?) I drank iced tea (not sweet) the first day before discovering that they did have root beer. Somewhat sated, we spent much of the afternoon relaxing in our roomette through the Montana scenery, and looking in vain for moose and bears. 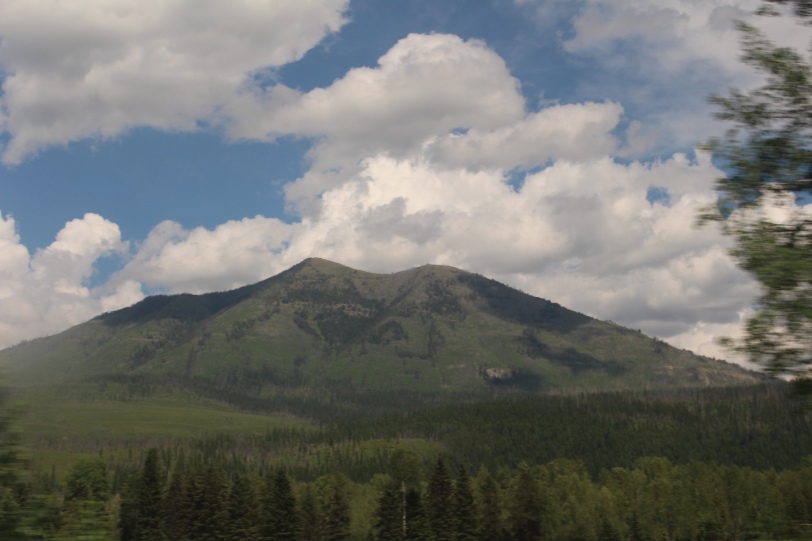 We had noticed that many of the deluxe sleeper cabins were unoccupied on the first stretch of the journey. This changed midday, as we picked up a large tour group from Vacations by Rail near Glacier National Park. Before they boarded, we were able to check out the deluxe cabins. They have a lower berth that can sleep two and converts to a couch, another seat, and a private bathroom. Definitely the way to go if you can afford it. The upper berth in the roomette is anything but roomy (plus you have to climb in and out of it), and the sitting space is pretty cramped for two adults.

Dinner was the best of the trip—the only full, relaxed, and timely evening meal on our journey. We did have to make reservations, since all of the sleepers were full on this leg and many coach passengers wanted a “real” dinner too (even some of the tour group folks were in coach). All the dining car tables are four-tops, so our strategy was to put the three-year-old between the aunties on one side and mom and dad with the baby on the other. It worked surprisingly well, but is clearly not a sustainable strategy for older children. This night, Brad and Corrine and Maureen had surf and turf, while I had sweet potato gnocchi (and Maureen’s “surf”). It turns out kids in sleepers are not restricted to the very limited (hot dog or mac-and-cheese) kids’ menu, so a hamburger was acquired for the three-year-old. Dessert was also on offer and included, so all of the options were sampled by our group.

It was early yet, so we spent some time in the observation car before retiring to watch the sun set on another day of vacation.