Today was the first “real” day of riding. 71 miles, 2500 feet of climbing. We got off a little after 7. People had been leaving since about 5. The people in the tent next to me started disassembling their tent—using a light—at 4:30. This is not a sleeping trip, apparently.

After our team photo,

the day began with a hill. Which wasn’t bad. We cruised through rolling hills to the first pass through town at Aspinwall, where we got some 2nd breakfast (yogurt for me, bacon sandwiches for everyone else).

We didn’t stop at Manning, but could hear their hometown country singer, Brad Morgan, from the route.

The best stop of the day was Templeton, where Templeton rye is made (side note, it used to only be bottled there, but now the entire process takes place on site). One of our team members had made prior contact with a Templeton bigwig who shares his family name. Whether or not they’re actually related, he bought our entire team drinks. Yum. 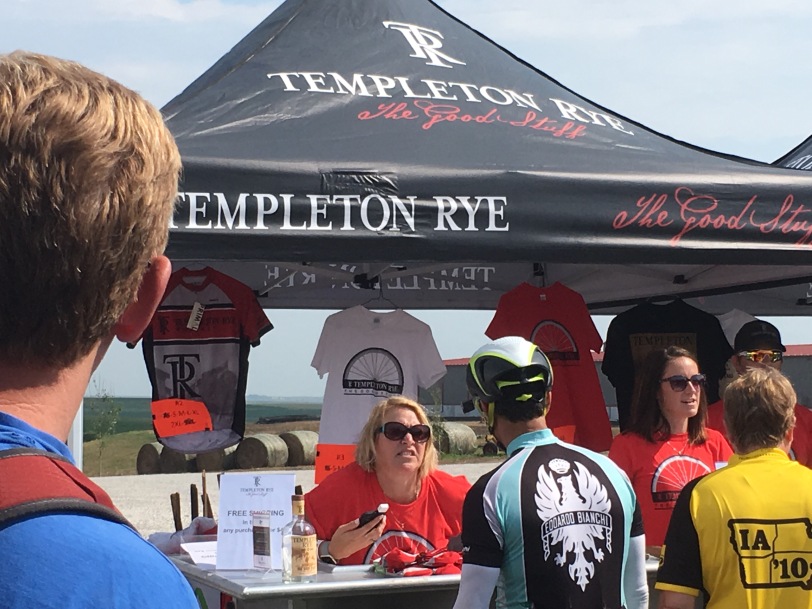 Slightly happier, we headed out for more hills and miles. We lunched at Coon Rapids, where I had chicken stir fry from Leaf Grill. They were also selling lemonade for $5, which did not seem like a good deal compared to cider or beer for $3–you can guess where this is going…

Again happier and more sated, we were planning to look for pie in the final pass through town of Scranton. Along the way, though, we heard the distinctive sound of Beekman’s ice cream makers. So we stopped, of course. There was a line.

I’d heard about Beekman’s from several people, so I was excited to try it. Sadly, I have to report that the peach can’t hold a candle to Graeter’s peach. And it was $7 for the smallest available size. I will probably opt for a root beer float if we stop there again. Needless (?) to say, we did not stop for pie in Scranton.

We shared a park camping area with Bubba’s Pampered Pedalers, so space and showers were in high demand. Happily, the church across the street still had yummy chicken and noodles and pie when we got there.

As we were warned, there is no cell service tonight, so I’ll post this blog eventually. Tomorrow is shorter and we end in a college town, so I am hopeful.