I find that the 2nd and 3rd days of a weeklong adventure are always the most challenging, at least mentally and emotionally. There really is something that changes as you approach “the hump.”

So today was a better day, but still hard. We managed to get started about 6:30, so the bike traffic wasn’t as thick as yesterday’s. We didn’t stop at the first pass through town, as we were seeking a specific breakfast. Fortunately, we found it at around 13 miles. Slipstream Organics was serving up huge bowls of yogurt, granola, and blueberries on a lane just off the course. It was a delightful stop, complete with sunflower photo ops. 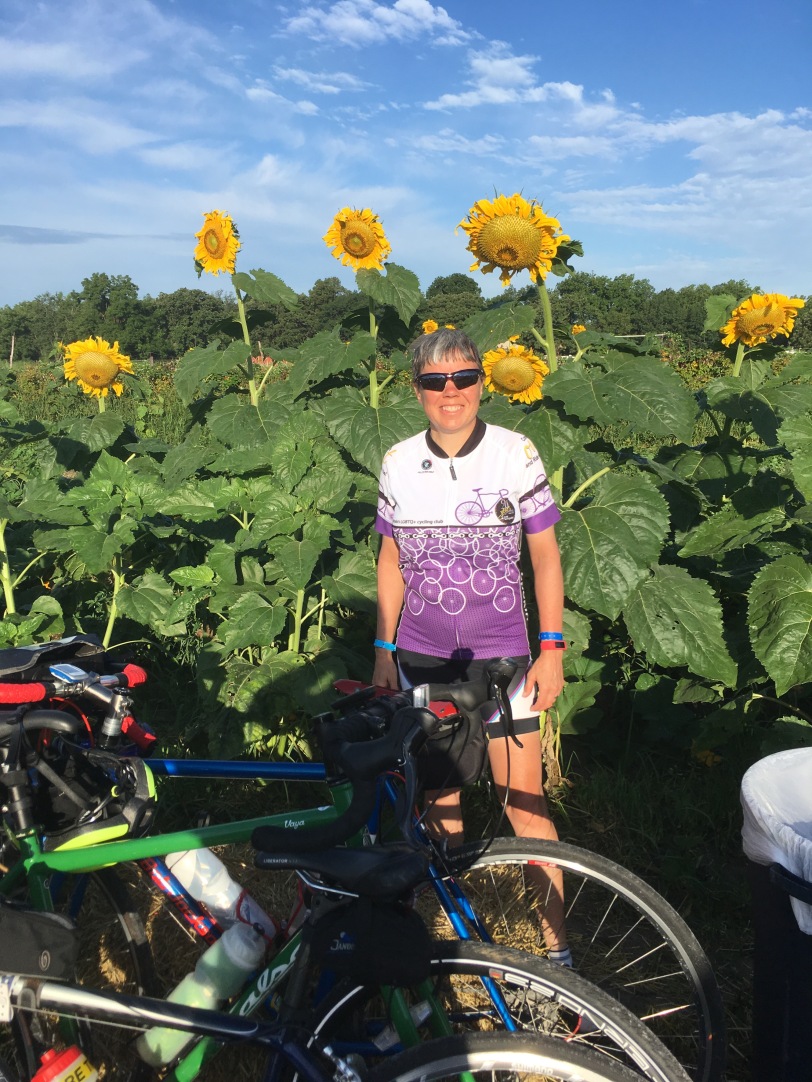 After passing through Colo, we made a quick stop in State Center (the geographic center of the state) to refill bottles. Food looked good, but we weren’t hungry.

So we continued through Melbourne and on to Baxter. Of course the wind was from the south, since we had a far amount of southerly travel today. So Baxter was a welcome break. We acquired “walking pasta,” which was noodles and sauce in a hollowed-out roll. Not exciting, but fuel. We then moved on to “Wine on Wheels,” the beer tent. I first tried Tricycle cream ale from SingleSpeed Brewing in Iowa, but I found it too bitter. The friendly woman working the booth had told me that I could return it, so I traded it for an Oberon ale from Bell’s Brewing in Michigan, which was a bit more to my taste. I definitely felt better after food and drink and a spell of sitting.

The last 14 miles contained more than half of the climbing for the day. It was essentially one 100 foot (of elevation) hill after another. The town of Newton gave us a great welcome with beach ball towers and residents cheering from their lawn chairs. Then they gave us three more hills on the way to the church hosting our camp.

This was ice cream day at Brancel charters, so I made sure to be showered and ready by 3 p.m. We met some other Ohio folks while we waited who knew some of the areas where we ride near Miamisburg. Ice cream was pre-packed and good. After a while, I got seconds in the form of a root beer float. Good thing I rode 62 miles.

All the nearby churches had meat-only dinners, so we went (via shuttle) to the expo in search of Navajo tacos. We found them, but they were out of beans 😢, so I had something else quite mediocre. So it goes. We did encounter a faux Gilligan’s Island cast (I have no idea).

We found a coffee shop that had a/c and wifi and enjoyed hanging out there for a change. The Jimmy Buffett cover band might have been fun, but 9-11:30 p.m. was out of the question.

But, we are more than halfway through the state, the miles, the climbing, and the week. Three more days. Onward!