Just a Pile of Stones

Thursday was kind of an epic day. We visited the ancient Agora and also toured the Acropolis. In case that wasn’t enough, in the evening we visited the Benaki Museum.
We also ate food.
I’ve been to the Agora and Acropolis before (and I think the Benaki too, since I remembered seeing some of the recreated rooms when I saw them last night) but it still felt pretty fresh to me to see them again. Seeing them with Angie and also with the audio tours provided by Rick Steves made it a great experience. Not that I didn’t love seeing them with my sister Pam back in 2007, though I don’t recall how much I saw with her and how much I did on my own.
Traveling with someone else rather than alone, which I have done on shorter trips in the past, is so much more enjoyable for me, even when we are experiencing some parts separately. By which I mean looking at different display cases in the museum. 😉
Anyhoo, Angie had recommended I put the Rick Steves audio tours on my iPhone. She already had them on her iPod. We used them for the Agora and Acropolis visits. I think I found them more valuable and interesting than the audio tours that you get a lot of places these days. I definitely saw some things at the Agora I didn’t remember from last time, or didn’t take in the same way. And you can still pause to say something to your companion of course.
At the Agora we saw the rebuilt Stoa, which I don’t remember seeing last time.

It’s a reconstruction, with a museum too. Most of what one sees here has been worked on by people from the American School of Classical Studies in Athens, who started excavations in 1931. Rick (we’re on first name terms you know) talks about some of the stuff in the cases and it’s pretty interesting. The audio guide talks a little about the construction and uses of the different buildings, as well as the timelines. I was aware that Socrates hung out here, which I love, but there were buildings in use in the times of Plato, Arisototle and Alexander the Great too, and although there’s a separate Roman agora, the Romans were here too. Different buildings were built/destroyed/established at different times, which is the same case for the Acropolis. One thing we found interesting was that after certain sackings and burnings (including by the Herulians in around the third century), the people of Athens actually used the various bits and pieces from destoyed buildings to build massive walls to fight off invading armies later (Persians I think). Archeologists have actually looked at these walls and discerned the different places in the agora and eras from which the different blocks of marble originated. 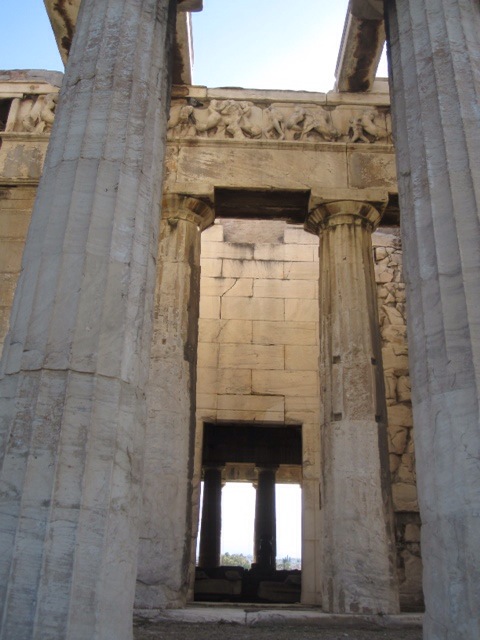 After we spent about an hour touring the Agora, we trekked up the hill to the Acropolis. Highlights of this phase included listening in on some of the stories an Australian tour guide was sharing with his group, and the delightful, enlightened American woman who was standing at the top entrance to the Agora, telling her friend that they didn’t need to go in, since it was just a pile of stones. Really.

We paused near the entrance for an overpriced frozen lemonade (shocked), grateful that we had bought a multi ticket for various attractions at the Agora, where it had been quite calm, so we didn’t have to queue for tickets at the Acropolis ticket office.
The Acropolis tour I did with Pam was pretty thorough, but I did get some new information from the audio tour, plus we walked around the side of the Parthenon that had posted information about some of the restoration efforts, which was cool. I wonder if it feels as awesome every time you go to the Acropolis? 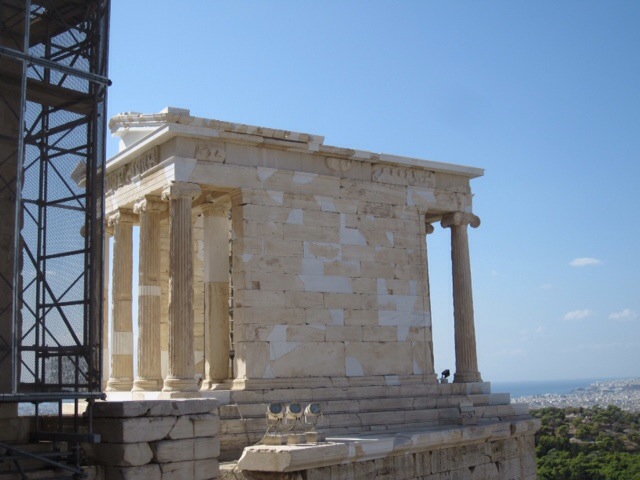 Unfortunately you can’t get very close to the cute little Temple of Nike, which is near the entrance, but you can walk around the Parthenon and the Erechtheion. You cannot go into any of the temples of course, since they are all damaged and getting worse (though benefiting from archeological work and reconstruction, with some of the original bits safely ensconced in the new Acropolis museum). 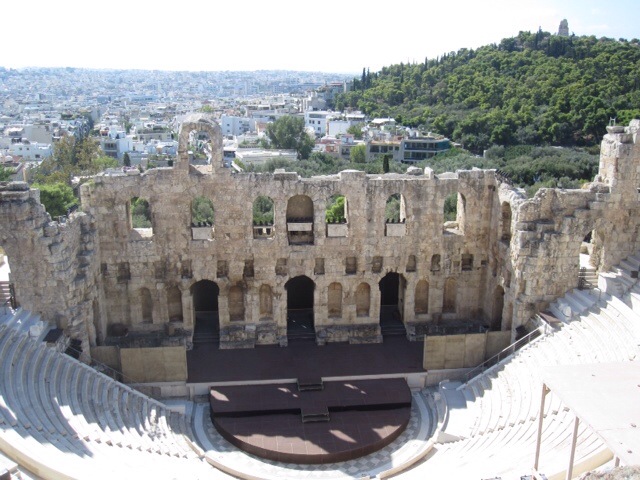 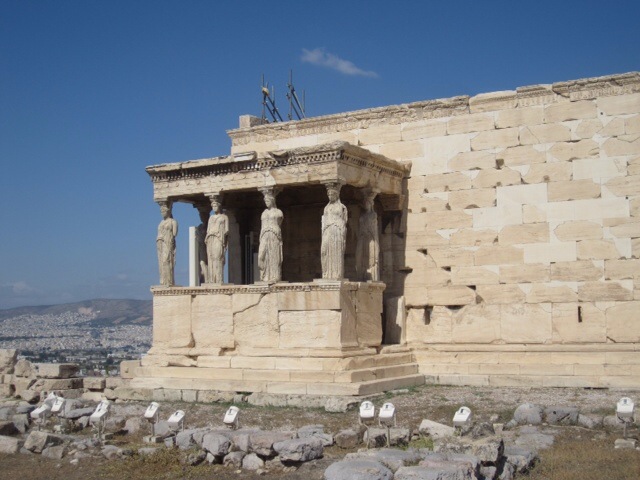 It was pretty gusty at certain points, and I had to take my hat off since it almost blew away. Note: not ridiculously crowded, but not sure Athens has much of an off season. And of course the usual oblivious folks walking into you or almost knocking you over with their canes. Again: Really.
We were pretty well cooked by the time we were done with the second tour, so we consulted the book version of our buddy Rick Steves. He understands that you want lunch near the sites, but not necessarily in an overpriced, flavorless tourist trap. One of the places that was on his list nearby the Acropolis was actually the first place we encountered as we walked toward the Plaka* and one of the few where we were not hit up by a server as we walked by. We had the choice of eating there or finding our way to another place in the book.
I think we get ourselves in trouble when we wait to eat sometimes, looking for just the right place to eat, and since this place (Xenios Zeus) had an interesting €12 lunch menu, I suggested we just go for it. It was worth it for the hummus alone in my view, and for the tadziki in Angie’s. There were a couple of large groups of French tourists there, so we figured they probably had a deal with some tour companies, and they seem to do a pretty good job. After the prices we paid in some parts of Western Europe for meals, €12 for three courses seemed pretty decent. The first course was a meze plate essentially: some hummus, tadziki, fried feta, spinach pie, taramasalata, and a fried zucchini cake. It was very tasty, and Angie and I each had favorites and neither of us care for the roe. For the main course, we had a chicken souvlaki dish that was decent but nothing special. The desert was a piece of sponge cake. Again, nothing special, but edible. We had a nice chat with a couple at the table next to us while we ate. They were from near DC and had their Rick Steves proudly displayed also.
*Side note: the Plaka is the neighborhood to the south and west of the Acropolis. It was the site of much of Athens historically, in addition to the Agora and Acropolis, before Athens got huge, and is now a huge tourist center with narrow streets, and tons of cafés and shops selling touristy stuff.
After lunch we were refueled but still pretty tired, so we repaired to our hotel to rest up for a while. We had figured out that the Benaki Museum, a major cultural museum here, has free admissions and is open late on Thursdays. Since it was also home to one of the restaurants recommended by my sister, we decided to go and see it and consider eating there if the menu was decent. After relaxing in our hotel room for a while, we got ourselves sorted and headed off to walk there. The route took us through a very busy and mainly pedestrian shopping area, and also to the Parliament building. This former palace is also the site of the tomb of the unknown soldier, which is guarded by Greek soldiers in their traditional garb. When we got there, there was a soldier in regular uniform standing very close to one of the sentries (who must not blink). Then he turned and spoke to the small crowd, saying that people could pose for pictures with the sentries but must not talk to them or touch them. Angie managed to get a shot of one of the sentries before everyone rushed up to have their selfie with the soldier.

We then walked on to our destination. The Benaki appears to be in a former mansion and it’s mainly designed so you walk from one room to the next. They are numbered so you can figure out where you are. The first floor is mainly archeological stuff, then the museum jumps to early Christian stuff, and then takes another jump to about the 16th Century. The part of the museum where they recreate rooms from mansions in parts of Greece was where I realized I’d been there before. It was also one of the coolest parts of the museum, and one of Angie’s favorite parts too. Angie also liked the costumes. I found some of the more recent stuff the most interesting. One thing I thought was fascinating was that they have all this stuff from antiquity, and most of it is in cases, but some of the pieces are just sitting there, not behind glass or a cordon, or anything. The Benaki also has a restaurant on the second floor (third floor to us Yanks), and we stopped there for some salad before finishing our tour and walking back to our hotel. The salad was decent. I had a Caesar and shockingly, Angie had the Greek salad. Yes, I am being facetious. Angie loves feta, and she loves olives. Ergo, Greek salad for her often. Angie said it was the best feta she had eaten so far on the trip.

2 thoughts on “Just a Pile of Stones”