The last of five port days in a row brought us to Charlotte Amalie, St. Thomas, United States Virgin Islands. We opted to see the town instead of going to the beach.

We started relatively slowly with breakfast in the Lido buffet and a visit to the Front Desk to sign up for Wednesday’s 5K fundraising walk and return our DVDs. We then walked off the ship without having to wait in line.

All the maps we had were of dubious quality, so we did not fully understand how far it was to town. We started to suspect it was not close when we saw signs that said 30 minutes to downtown (along the walkway, to be clear). The walk was also along a busy road, so it was less than pleasant, but at least it was steps. Many steps. 18,000 or so by the end of the day.

Side note: We were somewhat surprised to notice–this being the U.S. Virgin Islands–that driving was on the left. For added complication, most of the cars we saw were of the American design, with the steering wheel on the left. Though this seems less than ideal, I guess it would be cost-prohibitive to change the infrastructure. Other islands with left-side drive seemed to use right-side steering wheels though, so it seems that part of the disconnect could be overcome. I guess one adapts to the system one finds…

Once in town, we were able to use Google maps to locate the points we wanted to visit. We first trekked up to Blackbeard’s Castle, a National Historic Landmark, but chose not to pay the $10/person entry fee to walk about 20 yards. Instead we walked back down the route known as the 99 steps (it’s actually more) just enjoying the views. 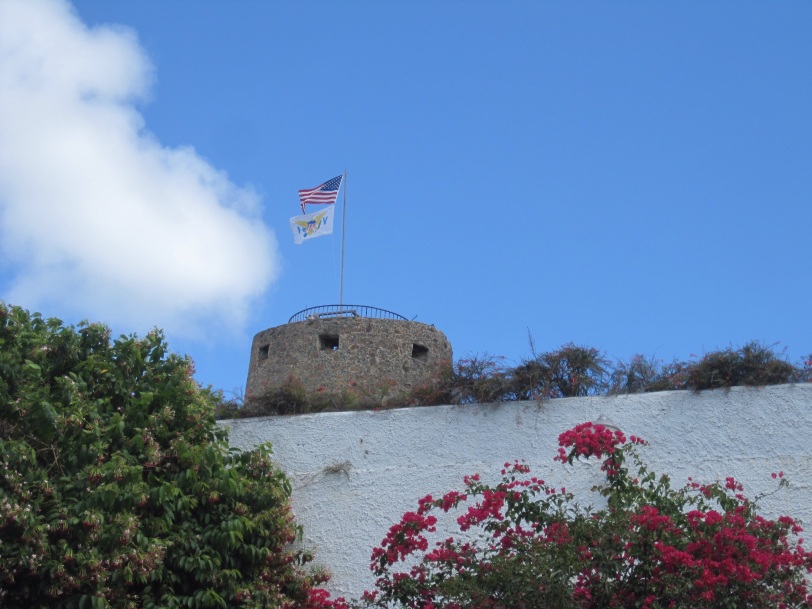 ﻿On the way to Blackbeard’s Castle, we passed a statue honoring the Three Queens, three former slave women who led a revolt against conditions in the then-Danish Virgin Islands. Though the slaves were nominally emancipated, living conditions were still intolerably oppressive. Sources I consulted differ in the details, but apparently the rebellion was on St. Croix and the women were named Mary, Agnes, and Mathilda. 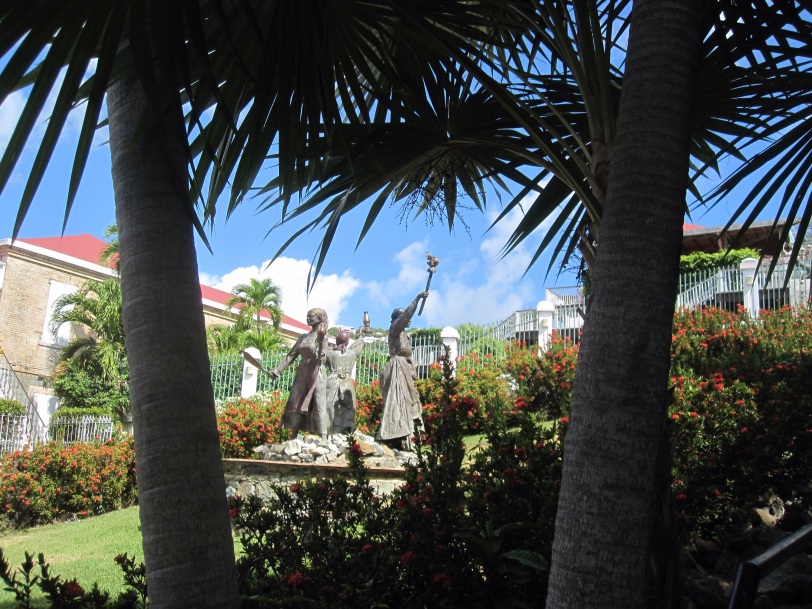 Back down the hill, we made our way to the St. Thomas Synagogue. The current building was built in 1833 by a congregation founded in 1796. Thus it is the oldest synagogue (building) in continuous use under the American flag and the second oldest synagogue in the Western Hemisphere. They have a small museum attached that tells the story of the Jewish population on St. Thomas. All of it was interesting, including the family history of famed painter Camille Pissarro. Pissarro’s father came to St. Thomas to run a business that he inherited from his uncle, with the condition that he run the business with his uncle’s widow, a Creole woman. Father Pissarro and his aunt got on quite well and they decided to marry. Historical accounts vary on why this was problematic, but the text at the synagogue states that she was not far enough removed from her last childbirth at the time of the marriage and that the relationship (aunt/nephew) was not acceptable for marriage, even though their relationship was the result of the uncle’s marriage rather than by blood. As a result, the children of this union, including Camille, were somewhat outcast and forced to attend local public schools. Camille was sent to school in Paris at 12, where he learned to appreciate the French masters and began his journey to becoming a painter, so the end result was a “win” for the art world.

﻿Finding the gift shop closed, we headed down the hill to the shopping streets. I began to wish that we were not the only ship in town, as we were repeatedly asked to come in and look at jewelry.  We took refuge in a small bar/restaurant on a side street that offered wifi for the price of an (excellent) iced coffee. After getting a blog post up and talking to Mom, we faced the marketing gantlet again. We did avoid buying jewelry, and after a short light rain relieved the heat a bit, we walked all the way back to the pier. 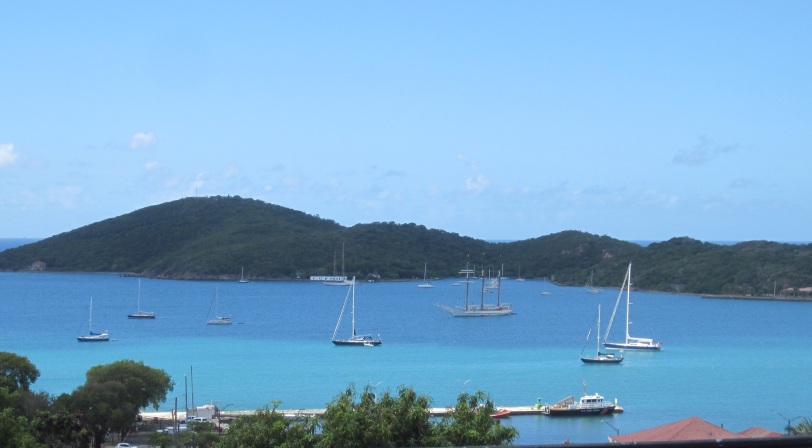 As we were trying to eat a pear, an iguana approached us. I understand that they are vegetarians, but I still don’t like them too close. I think it may have been after our pear. We moved. 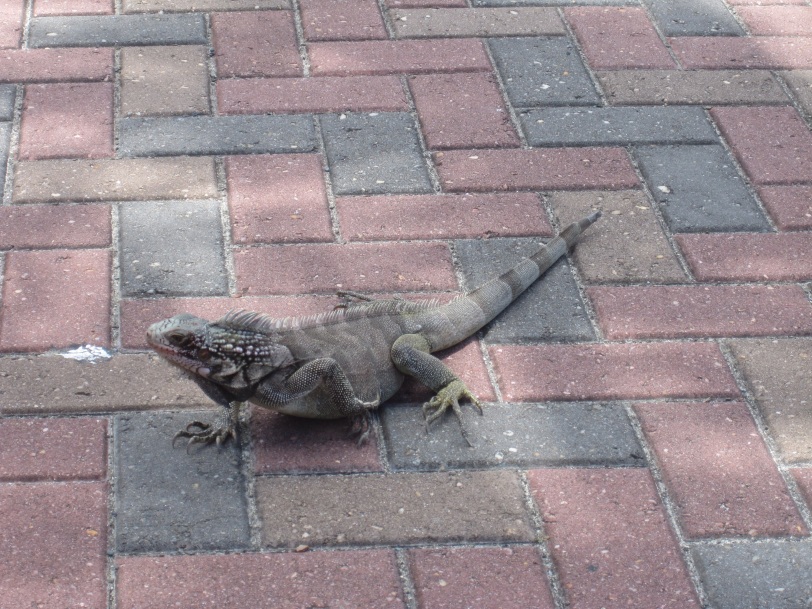 Back on the ship, we headed up the stairs (they still aren’t getting easier) to Lido lunch, then rested before the next phase of the day.

Evening on the ship is food time, especially on this cruise. We were so lucky to pick a cruise with a guest chef and a guest mixologist. Today, we saw the ship’s food host, Shannon, prepare some cold soups–mango gazpacho and an avocado lime soup. We didn’t get to taste, but we’ll be trying the mango gazpacho recipe when we get home. 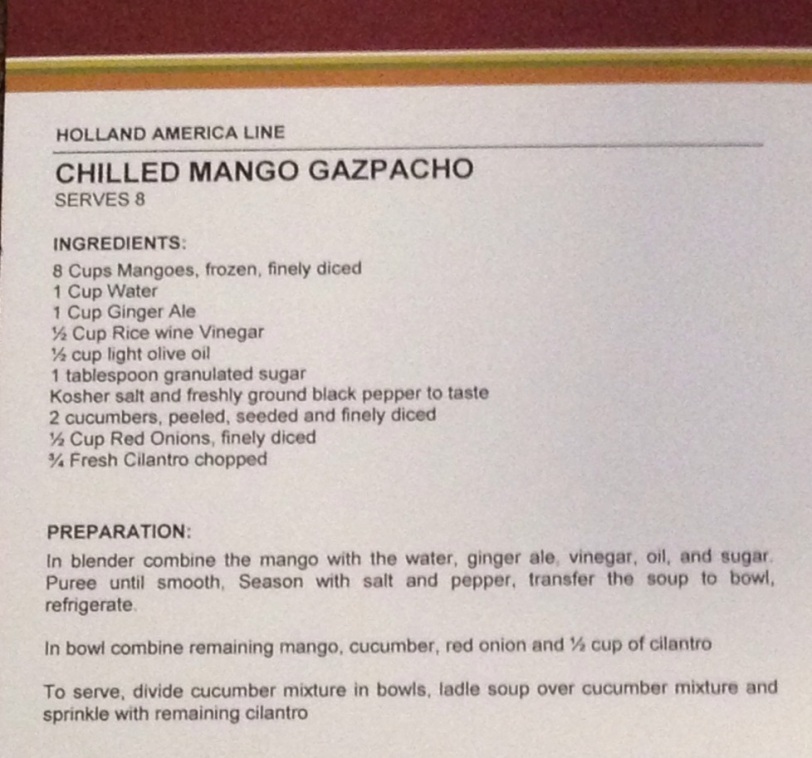 We next stopped by the library to catch up on news. Holland America’s libraries are sponsored by the New York Times, so there’s an 8-page Times Digest distributed daily and the library’s computers access the New York Times (and not much else) for free. Since we gave up our NYT subscription (and with it online access) in August, it was a treat to read as many stories as I wanted.

After that brief interlude, we went to the 5:00 Sip, Savor, Sail appetizer and cocktail event. This night it was held in the Crow’s Nest bar at the front of the ship on Deck 12. It was nice to be able to see the scenery, including a small storm we sailed through. We enjoyed cocktails and conversation with our spin class and foodie event buddy Nicole. She’s here with the guest mixologist Trevor and works in the beverage industry herself.

We had already decided we were too tired to deal with dinner in the dining room, so we had a simple meal from the buffet before an early retreat to our cabin.

The previous day’s featured movie plays on the TVs each day, so we decided to watch Wild. I enjoyed the book, but not so much the movie. It seemed odd and at times ridiculous on the screen. It lacked believability in ways that the book did not. Short version, read the book, skip the movie.

Up next, last sea day and last spin class.