If I regret anything about this trip, I think it will only be that we didn’t take advantage of the opportunity to see England play the West Indies in the test match while we were in Antigua, especially since the tickets were only about US$12. But I had to be honest with myself that after the past three days, my body could not have stood up to several hours in the sun. In fact, we only found out about the game while we were touring St. Kitts on Sunday, but we didn’t even have the energy to follow through on our original plan for Monday, visiting Nelson’s dockyard, let alone find our way to the stadium and sit in the sun all day. Not to mention, Angie doesn’t know the first thing about cricket, so she might have been bored silly.

So, we decided we would check out the cathedral and the museum, maybe some shops, and call it good. This turned out to be more than enough, once we had run the gantlet of the hawkers and taxi drivers who did not leave us alone for at least three blocks after we left the port entrance. Using the not-very-well-proportioned map provided by the ship, we found our way to the Anglican Cathedral of St. John the Divine. However, it appeared to be in severe disrepair and not very accessible. 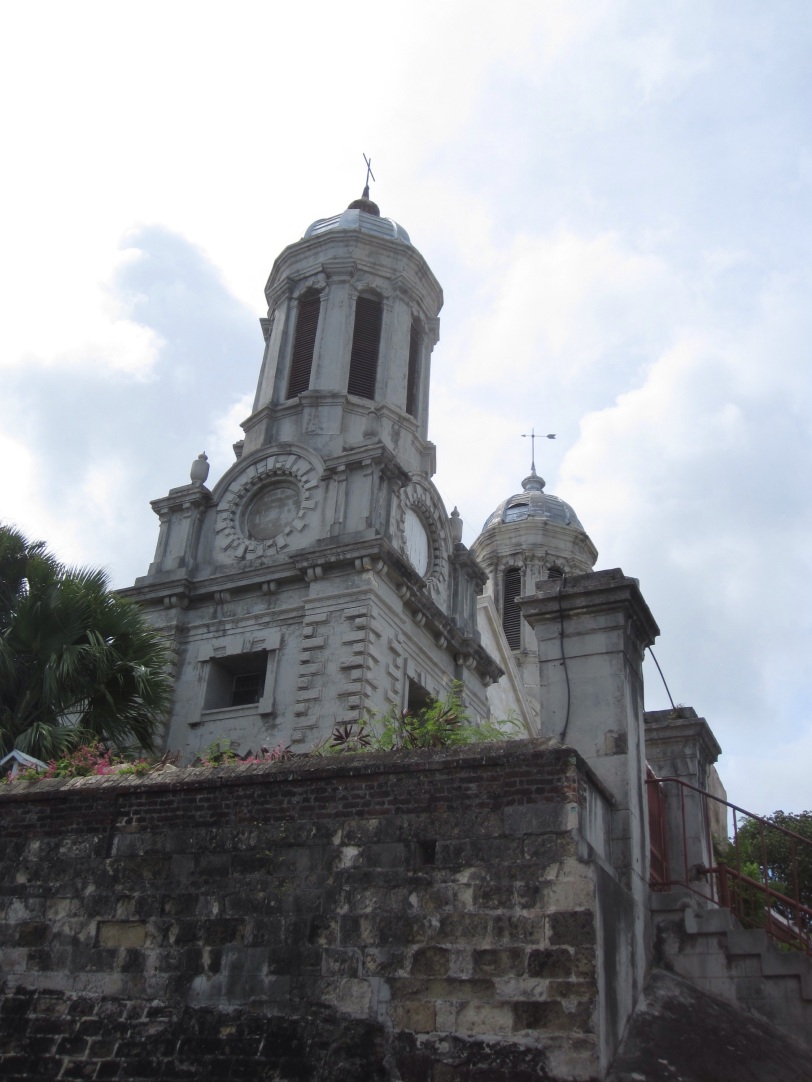 ﻿It’s a neo-baroque building dating from 1845 and it sits pretty high on a hill, but it didn’t seem to be very appealing. According to the awful map from the ship, the Museum of Antigua and Barbuda was on the same block, but this was very clearly not the case. We consulted the pages of the guide book excerpt Angie had brought with us and it gave us a much better description of where to go. Once we had located the place (in the building that had served as the courthouse for many years, starting from 1750), we went inside and paid the princely sum of $3 each for our admission. Angie says it was about worth what we paid, but it was a good way to get a flavor of the island and of the sister island of Barbuda, which are in fact joined about 100 feet below the surface of the ocean. Angie took note that a diorama of a sugar plantation that was on display was over 100 years old, so she took pictures of that. 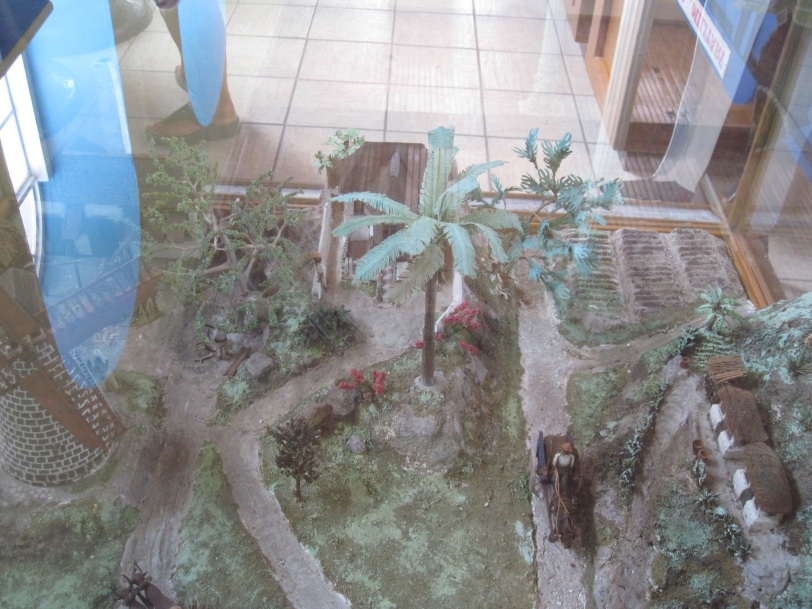 The rest of the exhibit focused on diverse aspects of history and life, including the prehistoric era and the arrival of the Arawak and others from South America, the slave era, and so on. Sugar and British colonialism were a big part of the story of course. One of the exhibits noted that the British residents refused to modify their manner of dress back in the slave era, even though what they wore was completely ridiculous for the climate in the tropics. But they felt they had to keep up the social graces of home.

The exhibits were very diverse, and even included a case of beer bottles, noting that the local beers are named after indigenous names for the various islands in this region.

When we left the museum, we thought we might do a bit more exploring. I had read in the guide book pages Angie had brought with us that there was a shopping area that was slightly less crazy than the main drag, called Redcliffe Quay, and we managed to find our way to that. In fact the guide book (Fodor’s) said it’s the most appealing part of St. John’s. It was quite quaint but we didn’t see much that made us want to hang around. We started making our way back to the ship via the obnoxious street full of hawkers (Heritage Quay), which was not fun and in fact rather annoying, but then we decided to not go right back after all and to head back over to Redcliffe Quay, where we’d seen a bar/restaurant that offered free WiFi (for an hour anyway). We had a lovely spot up on a balcony with a view of the two cruise ships currently in the port (one ours and another that was P&O, the English line) and we enjoyed a snack (tadziki and pita) and a drink while endeavoring to get some blogs up. 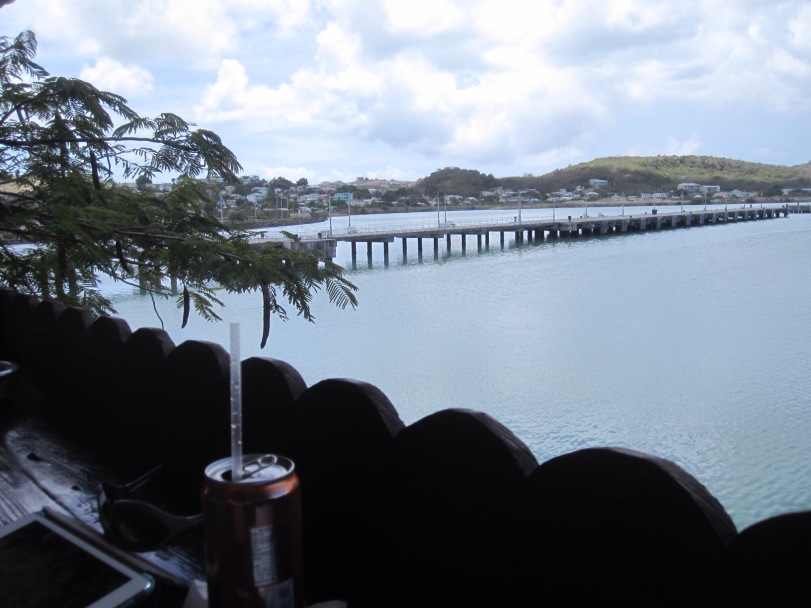 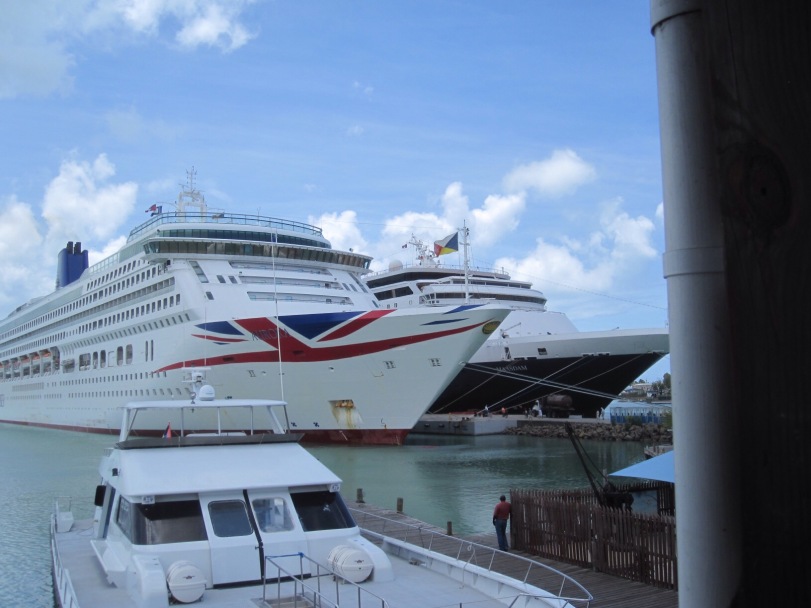 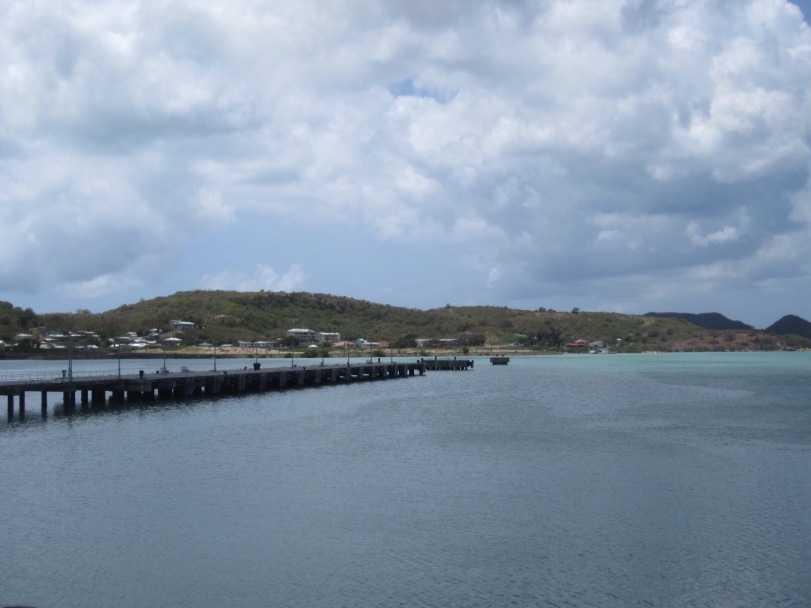 We only managed to get one blog posted because Angie’s got hung up and she lost all her links, but at least we got one up.

One final note about Antigua (and St. Kitts): it is unlawful on either island to wear any sort of camouflage garb.

After that, we strolled back to the ship and had a bite to eat. We took it pretty easy in the afternoon, resting in our room and working on new blog posts even if it was going to be a few days before we could get them uploaded on WordPress.

We wanted to rest up because we knew we were going to have a busy evening. Our first event of the evening was the Sip & Savor in the Mix bar, where there’s an appetizer offered by the guest chef along with a cocktail offered by the guest spirits expert Trevor Alberts. The appetizer was possibly my favorite yet from Natacha, a chicken croquette with a mango habanero sauce. Trevor actually made two cocktails on this evening, a planters punch and one called a jet pilot. He talked a little about the background of the drinks, and also mentioned that he is actually an ambassador for Bacardi (I can’t remember his exact title). Angie and I ordered one of each, which we do so we can try both of them, though usually each of us likes one more than the other. 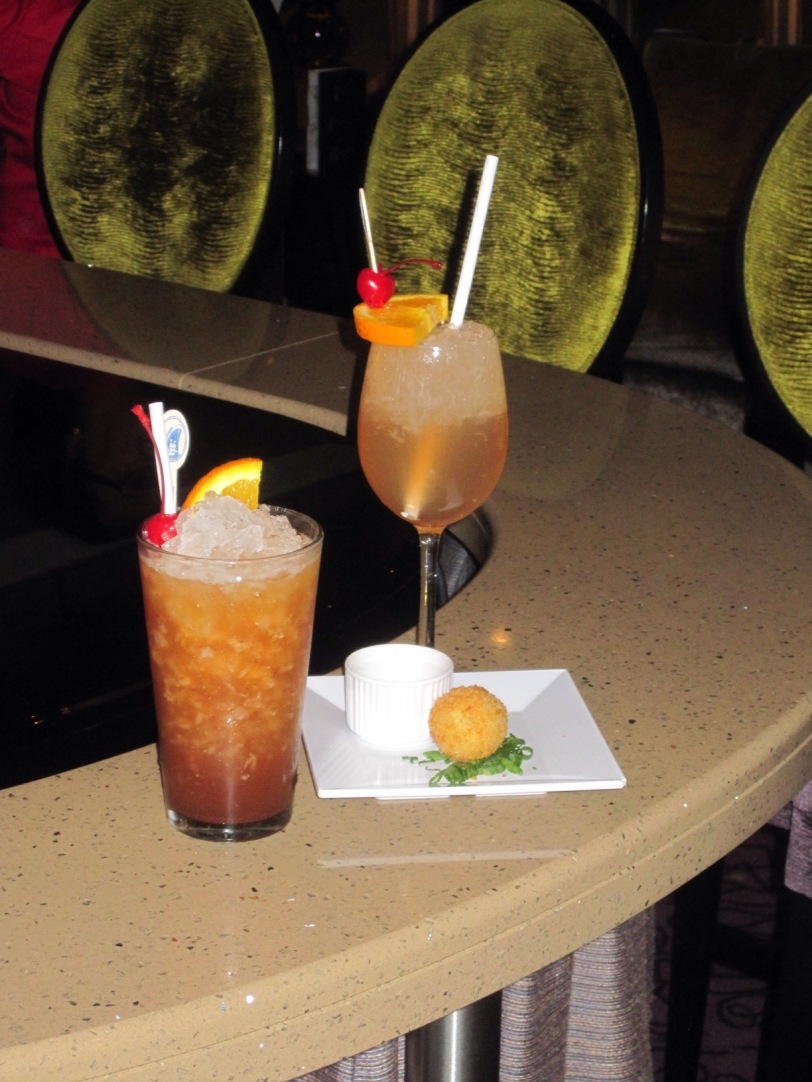 The woman who is one of our partners in the spin class was there and we had quite a long chat with her. We all seemed to enjoy talking about food and booze. The woman, whose name is Nicole, works in the liquor industry and used to be in the restaurant biz as well as working as a sommelier, so of course we found her very interesting. It was only as we were leaving for our next event that we realized that Trevor was her boyfriend!

Our next event of the day also involved alcohol. The ship was presenting a seminar and tasting around the whiskies of Johnnie Walker. It was pretty informative as we learned that Johnnie Walker had owned a grocery store. He got his start because all grocers in Scotland sold local single malt whiskies but he did not like how inconsistent they were, so he started making and selling a blended whiskey. Things grew from there and his sons got involved and then his grandsons. We also learned that Walker was a canny salesman who saw sailors as a good market, so he made his bottles square so they could be packed better. The company also make one called Swing that comes in a bottle that wobbles so it can’t fall over on board a ship. The company now sells about 10 different versions of varying quality and presentation, including a $3,600 version that comes in a handmade wooden box with a decanter tip that can replace the screw top once it’s opened! We didn’t get to try all the varieties but we were treated to Black, which is my go-to scotch, the Double Black (peaty, not my fave), the Platinum, which was very smooth, and a couple of the Explorer editions including the $159-a-bottle Royal Route, which Angie really liked. We did not get to sample the John Walker, the one that comes in the presentation box! 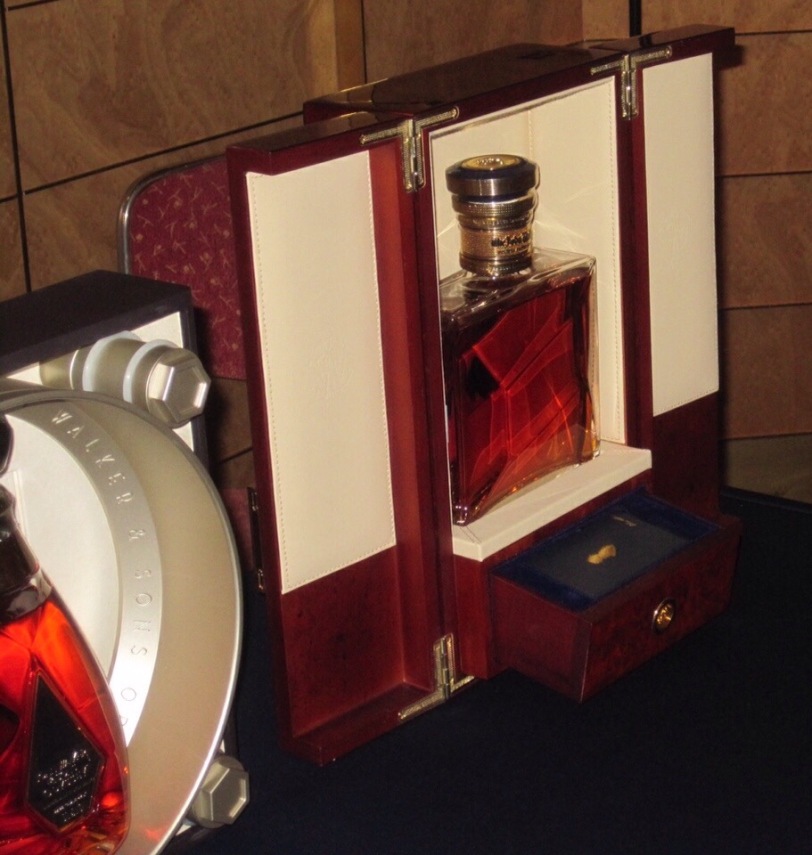 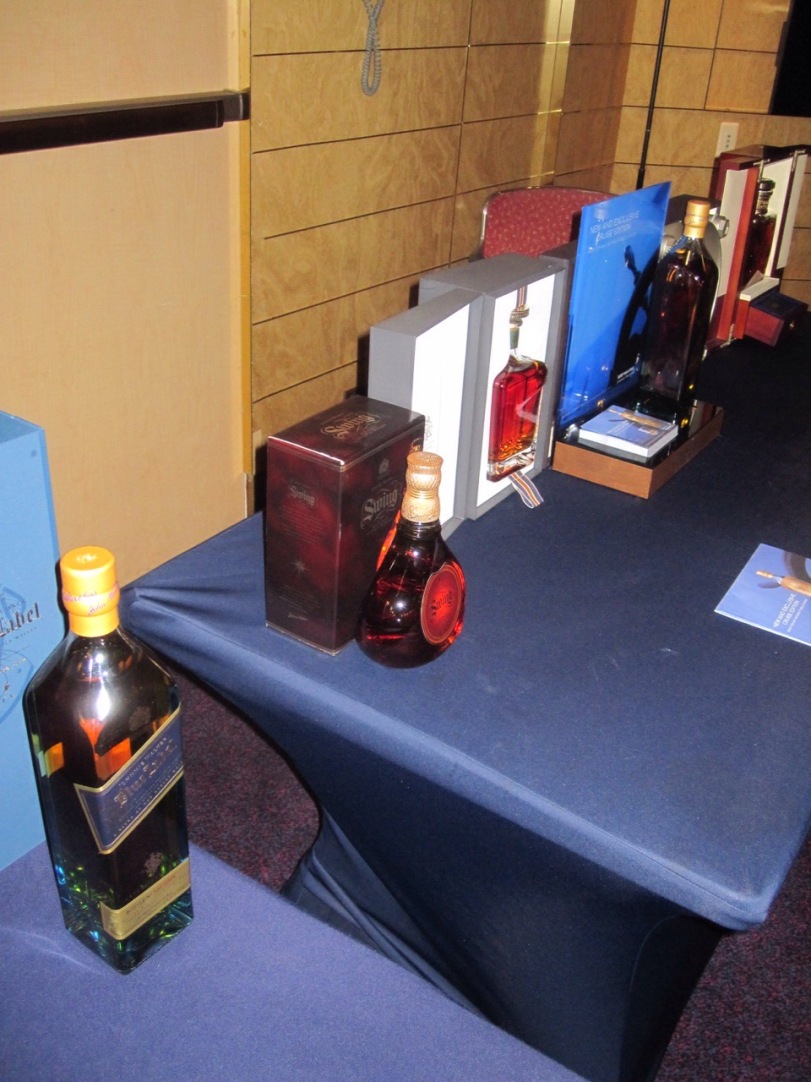 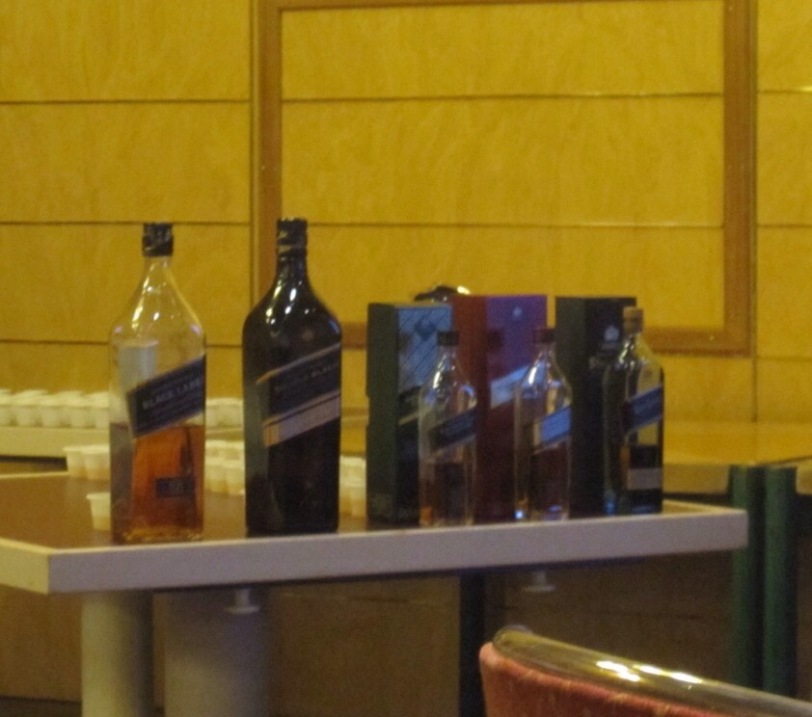 My favorite was the legendary Blue ($176.99) and the spirit shop manager even gave me an extra shot of it. They were small shots, but after trying 6 varieties, with the extra shot added on, I was more than ready to get some food in my stomach. When the session was over, we headed off to dinner.

We arrived at the main dining room at what looked like a busy time. Imam, the host at the dining room, had memorized our names and stateroom number early on in the cruise, but we’ve kept him guessing a lot on whether we want a table for two or to share with others. On this evening we said we would do whatever for us seated faster, and so we ended up with two other couples, one of which had also been at the tasting. That was therefore a good icebreaker, even if we were not all feeling fairly merry after all that scotch. This couple (Wendy and something I’m afraid I’ve forgotten) were from Montreal. The other couple were a bit quieter. They hailed from Michigan but also, like so many people on the cruise, spend time in Florida too. The conversation flowed fairly well and I made an effort to include the non-scotch drinkers in the conversation. It was pretty fun. I don’t always recall what I ate but on this night I do remember eating the grandma’s chicken soup and the lamb chops, which were very good. This evenings menu featured dishes offered by Chef Natacha, and I think Angie had both of them, the entree being the coffee-glazed chicken she had created in her demonstration earlier in the week. I think Angie found it relatively tasty even if the coffee flavor was not that pronounced.

We were too late to do the early show for the evening so decided to just retire at this point rather than staying up for late shows. All that booze does take its toll.