Monday was an off-the-bike, fairly full-on tourist day visiting one of our main goals for that aspect of the trip, Savannah, Georgia. Our main interest was seeing some of the architecture of this carefully laid-out city, which was designed by James Oglethorpe, who led the English settlement of Georgia in 1733. The central part of the city has 22 squares that are effectively parks, and each has its own character and distinguishing features.

The first square we visited was Monterey Square, not because it was one of the more notable squares, but because it is home to Congregation Mickve Israel, one of the oldest Jewish congregations in the USA (allegedly the third oldest). It is housed in what is possibly the only Gothic-style synagogue in the country.

Angie’s mom and I chose to do the synagogue tour while Angie and her dad stayed with the dogs outside. There are several things about the synagogue that I found interesting. The community was created only months after Oglethorpe himself had arrived and founded Georgia, by a group of mostly Sephardic Jews who sailed to America on a ship named the William and Sarah. They had fled the Spanish Inquisition and were sponsored by the Bevis Marks Synagogue of London, one of the most prominent congregations in Europe. Our tour guide, who was one of the least impressive tour guides I’ve encountered on this journey, did say that the story goes that Oglethorpe and the other leaders were not sure what to do with the Jews when they arrived, but since the charter of the new province restricted Catholics but not Jews, they felt they should admit them. One of the key founders of the community was Dr. Samuel Nunez. He had fled to London in a daring escape from Portugal (http://en.m.wikipedia.org/wiki/Samuel_Nunez). When his ship had reached the Americas, the governors were wary of letting the passengers ashore, for fear of creating a Jewish-dominated colony (G-d forbid). However, the area was afflicted by an outbreak of yellow fever and the only doctor had died. The leaders wanted Nunez to come and treat the sick but legend recounts that he said he would only come ashore if the rest of the Jewish passengers were also granted permission to enter the colony. The rest is history, so to speak. Another interesting feature of the early years of the congregation is that its members had brought with them from Europe two Torah scrolls that, unusually, were written on deerskin, rather than parchment. This was because they were created during the Inquisition, when Judaism was banned in Spain and Portugal, so the Torahs were made in such a way as to reduce suspicion.

The synagogue building was pretty interesting. It’s kind of odd to see a gothic layout with the cross feature in a synagogue. As I recall, one of the gothic-style synagogues that we saw in Prague avoided this by adding a fifth beam in each section even though it wasn’t essential to the structure, but Mickve Israel was laid out with the full cross structure of the transepts and all that. Here’s an example of a gothic layout. 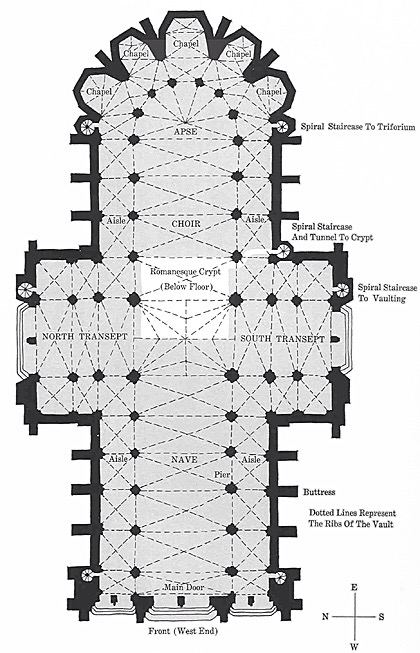 The upstairs of the synagogue building includes a museum. This was the part where our tour guide kind of lost us, since he insisted on describing to us what was in each case, as if we couldn’t read the explanatory placards ourselves. The coolest things in the museum, for me, were the two Sefer Torahs, since they probably dated from the medieval era, or at least some time during the Inquisition. While we were in the museum, I noticed a section where there was mention of a prominent member of the synagogue who supported the South in the Civil War, including the practice of slavery. One of the other people on the tour apparently also noticed it and asked our guide if the position of the synagogue had generally been the same. He got really defensive and went off on a rant about how the Civil War wasn’t really about slavery, which is a common–and not generally defensible–justification for the war, and despite her efforts to be polite and restate the question, he never answered her properly, choosing in the end to go off and find the rabbi for us all to meet. The rabbi was cool enough that he was wearing a Star Wars tie on May 4, but by this point Pat was ready to leave. We talked a bit with the woman and her family on the way out. She asked me if I’d felt she’d been unreasonable, and I told her she had asked a perfectly legitimate question that our guide had failed to answer. We had a nice chat with her and her husband. I liked that they were sharing something about their heritage with their kids, even if the kids were less than engrossed. But, given that they’d come up from Boca Raton for a gymnastics meet, I thought it was cool that they went out of their way to do this.

By the way, this synagogue is still active and is one of three congregations in the city.

While Pat and I toured the synagogue, Angie and Henry took the dogs over to Forsyth Park. They really liked it and Angie took these great photos.

By now, we were all hungry, so Angie got busy on her phone to find somewhere nearby for us to eat, where we could be outside with the dogs, since it was certainly too hot to leave them in the car. She located an English-style pub within walking distance, The Six Pence. However, when we got there, we saw that the outside seating was rather limited, and there were no available tables. We hemmed and hawed about what to do. The inside was practically empty but of course we couldn’t go in with the dogs. Then, a gentleman at one of the outside tables turned to us and said that he and his wife were almost finished, and that we were welcome to sit at their table with them. We gratefully sat down and had a lively chat with the pair, who were working their way back to their Pennsylvania home from their winter place in Florida. He said they lived on the barrier islands, which we later figured out must be the islands in the area near where Bill and Doris live in Palm Harbor. The man had been born in England near Chester, and loved his home in Pennsylvania (from where his wife hailed) because it was so much like Chester. They were quite lovely and we were so appreciative of the generosity they showed. The servers at the restaurant were also quite lovely, bringing out bowls of water for the dogs and being quite attentive to our needs. Henry and I both enjoyed the Ploughman’s Lunch, though the soup that came with mine was mediocre. However the cheese and pickled onion were excellent. Angie had a soup and sandwich combo, and Pat enjoyed a shrimp sandwich.

After our satisfying lunch we thought about trying to see some of the other sights, but we didn’t really have the stamina for the Telfair museums. We did drove around a bit more and managed to see the outside of the Owens-Thomas House and the Jepson Center, but we didn’t want to play the cost of admission just to see the statue from the cover of Midnight in the Garden of Good and Evil. We also drove by the Juliette Gordon Low House (founded the Girl Scouts of America) and the First African Baptist Church, which purports to be the first African American church in the country. First pictures are of the Scottish Rite Temple 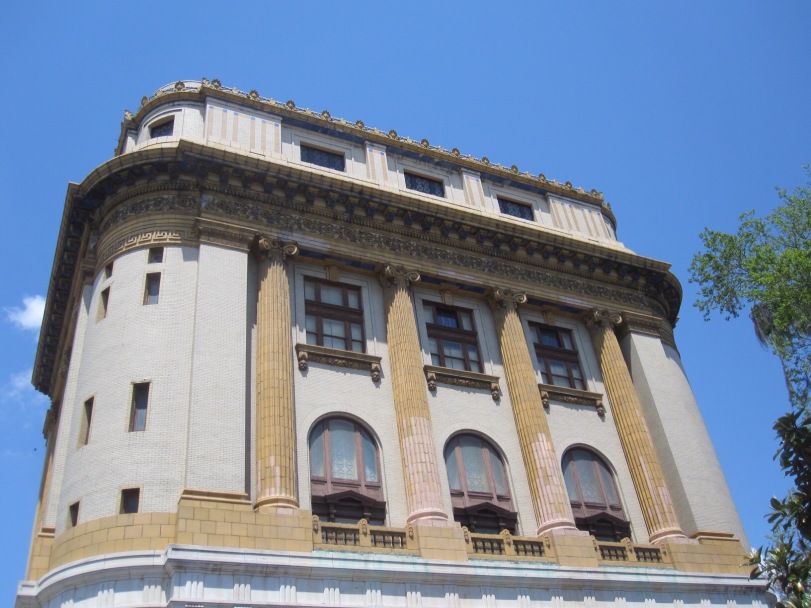 These are of a cool peice from Telfair 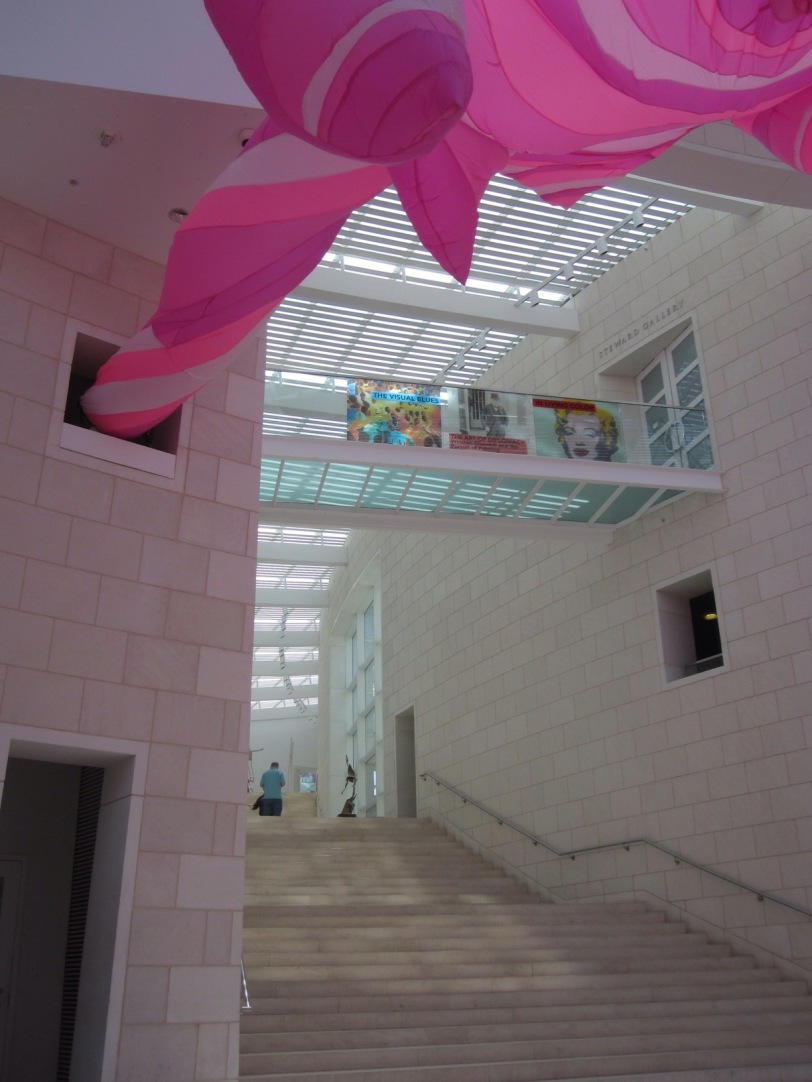 We finished our tour of the city with a walk along the ever so touristy River Street.