Sadly, the perils of adulting (real estate deals in two cities, and that small detail of working for a living) have kept us from as much adventuring and blogging as I would like. We did, however, step away from everything a couple weeks ago to pursue a little adventure to Trinidad (Colorado, not the Caribbean).

We considered camping, but decided on a day trip this time to simplify preparation and give us a weekend day at home for chores and bike riding. We headed out Saturday morning after a leisurely breakfast. The morning was already relatively warm and, as usual, we saw a number of hawks as we drove south on I-25.

Our first stop was the Ludlow Massacre Memorial, not an uplifting site, but an important one. In 1914, about two dozen people, including women and children, lost their lives here in a conflict between miners striking for better working and living conditions and militia brought in to break the strike. I never heard about this in history class, which is what prompted Howard Zinn to include it in his Education Project. The University of Denver also has a Coal Field War Project devoted to the mining labor conflicts. 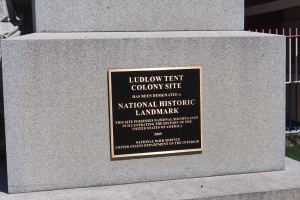 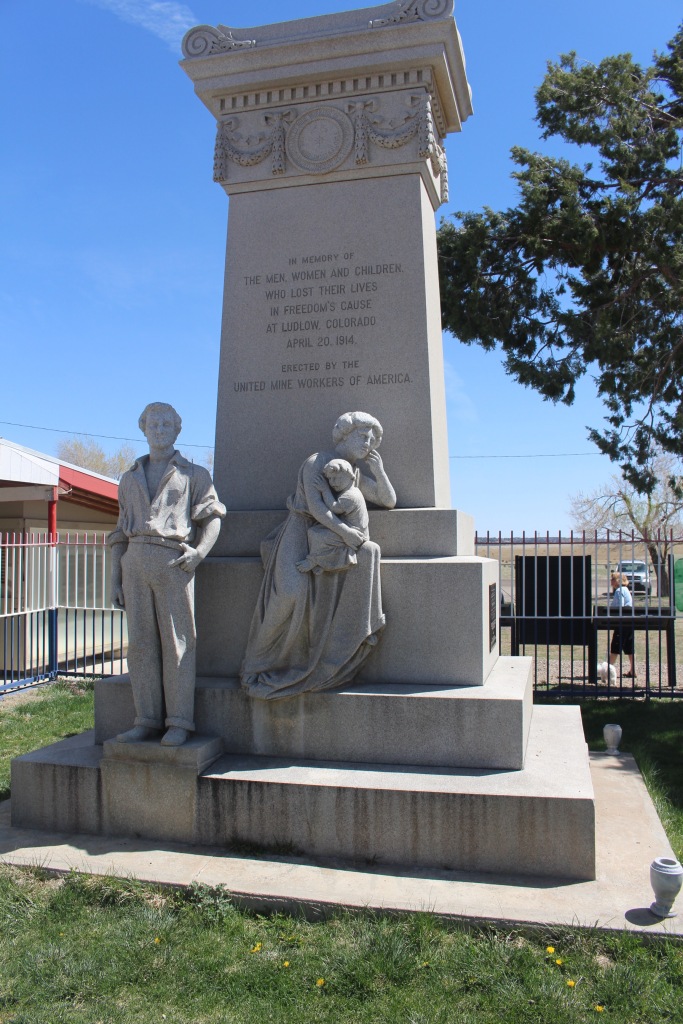 There were not many people there, but the United Mine Workers of America maintains an informative site and memorial. Maureen noted that the interpretative signs appeared to be new since her last visit (they were well done, too) and, indeed, I located the old signs behind a building.

We traveled south from Ludlow to Trinidad, then west to Trinidad Lake State Park. We chose the Carpios Ridge entrance, since that is the location of the small Visitor Center. It was packed upon our arrival, so we picked up some brochures and headed to the picnic area. There are several individual (free with park entry) and group (extra charge) picnic tables and shelters in the Carpios Ridge area. Most have views of the lake. The surroundings were pleasant, with the pines (and their smell) a welcome change from the high desert we’re used to in Pueblo.

We decided to hike part of the Reilly Canyon Trail, but we were not sure how to reach the trailhead, so we stopped back by the Visitor Center. It was much less crowded, and the ranger explained where to park, which was behind the Camper Services building in the campground. The hike starts on the Levsa Trail, a one-mile interpretive loop. The Reilly Canyon Trail branches off after about a half mile.

The hike was challenging and it was hot, so we made it to the 1.5 mile marker on the 4-mile Reilly Canyon Trail before turning around (reminder to self: always wear your boots–even if you think you don’t need them). We enjoyed the scenery, and the solitude. We saw only a couple people on the entire hike. Also interesting–in a loud way–were the frogs in the ponds we passed. I couldn’t see any, even with binoculars, but I could sure hear them. We didn’t really see any wildlife, except lizards and crows, but we saw evidence of ungulates. 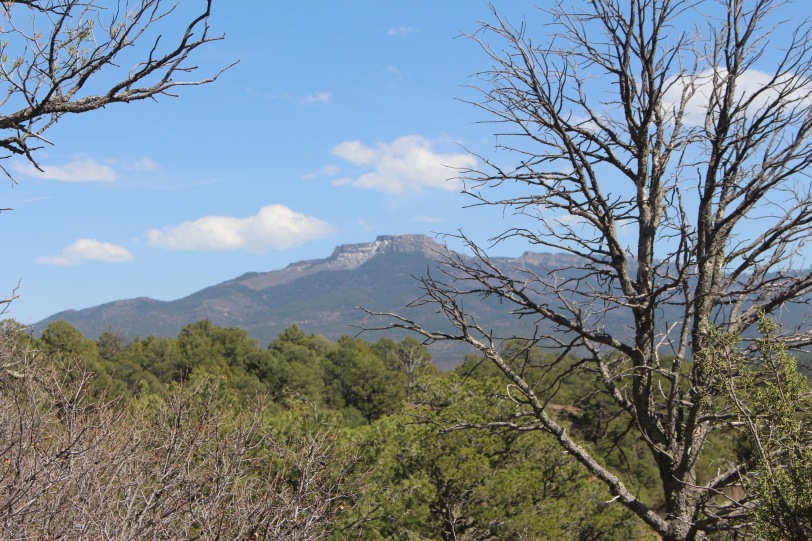 We definitely want to go back to Trinidad Lake to camp and to visit the Long’s Canyon Watchable Wildlife Area. It was a worthwhile day-trip, but would be even better as an overnight.